As far as connections are concerned, the rear of the Xbox One S is almost identical to the Xbox One: HDMI out, HDMI in, two USB ports, IR out, optical audio out and Ethernet.

The HDMI output has been upgraded from 1.4a to 2.0. The HDMI 1.4 standard is technically capable of supporting 4K, but only at 30Hz. Films and TV shows shown at 30Hz and will look choppy as hell and may give you a headache. HDMI 2.0 means the Xbox One S can output proper 4K at 60Hz.

The Kinect port has gone. This isn’t a deal-breaker for me. It’s a move that also doesn’t surprise me, considering the number of people I know who use the Kinect (none). Those who want to use a Kinect will also be able to connect the peripheral via USB with an adapter. Microsoft is currently giving them away to existing Kinect owners.

An IR blaster has been added to the front. That’s Microsoft’s way of increasing the Xbox One S’ multimedia capabilities.The IR blaster lets you set the Xbox One S to turn on other devices, such as your TV or home-cinema amplifier. It’s a nice idea, but I still found myself using the dedicated remotes as they’re less unpredictable. 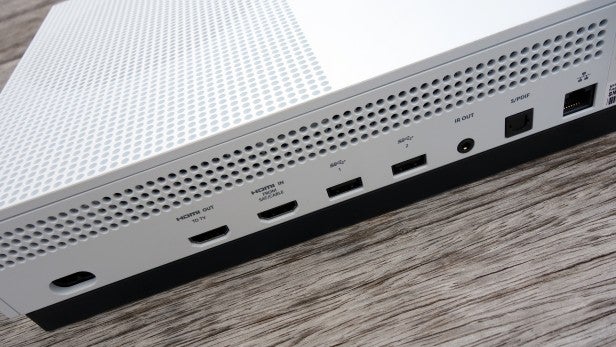 The addition of a 2TB storage option is another welcome change. Any Xbox One owner will tell you that even a moderate game library demands plenty of space. And as such, I’d recommend serious gamers opt for the 2TB option over the smaller 500GB and 1TB configurations. At launch time, 2TB was the only option available, but now it’s a rarity.

On the inside, the One S’ specifications mirror those of the Xbox One. It’s powered by an equivalently specced eight-core AMD custom CPU, clocked at 1.75GHz and the same Radeon GPU with 1.23 TFLOPS peak shader throughput and 8GB of DDR3 RAM.

The chipset may be the same as before, but the GPU frequency has increased from 853MHz to 914MHz. This may allow for a minor improvement in performance, but Microsoft says it isn’t supposed to be a selling point. Instead, the extra power is there to handle the strain of HDR games.

HDR is the next big thing in video. Basically, it offers greater contrast and a wider range of colours. We’re starting to see it in films and TV shows, but now it’s coming to games. The first HDR games are Forza Horizon 3, and Gears of War 4 . For a report on HDR gaming, hit the link below

Related: What is HDR gaming? All you need to know 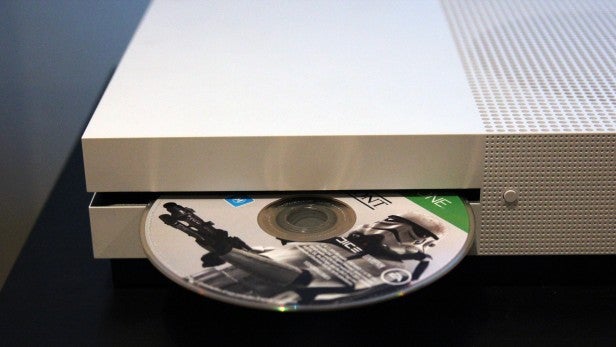 So the games don’t perform noticeably better, and options are limited on HDR gaming. This means your gaming experience on the Xbox One S will be virtually indistinguishable from that on the Xbox One – except for ultra high-definition video output.

The Xbox One S automatically detects a 4K TV. When you first boot up, it will ask if you want to select 4K resolution, so respond with “hell yes”. There’s a helpful screen in the Settings menu that will notify you on the worthiness of your TV.

Little ticks and crosses show whether your TV can handle 4K at 60Hz, 50Hz and 24Hz, and whether it’s compatible with HDR10 video. Basically, it indicates whether you can watch video and/or play games in 4K and HDR. I used a Samsung UE49KS7000, which is one of the least expensive TVs to get ticks across the board.

Assuming you’re given the go-ahead for 4K gaming, the Xbox One S will automatically output your games in 4K. But it isn’t native 4K, because Xbox One games only go up to Full HD 1080p. Instead, the Xbox One S upscales the games, which means making up pixels where none exist. 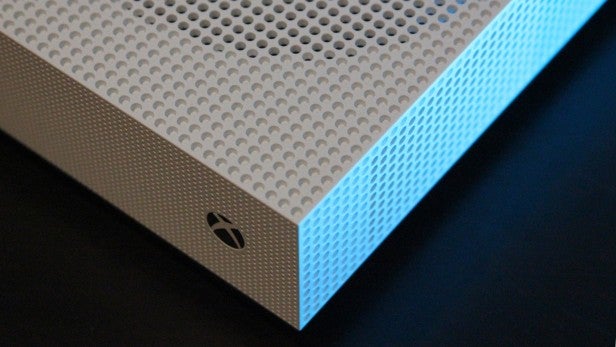 The Xbox One S is a superb upscaler. The picture is super-sharp, with some nicely defined edges and little in the way of jagged edges. Only the finer textures appeared a little blurry. On the whole, however, the machine does an excellent job of making 1080p content look good in 4K.

The alternative is to make the Xbox One S output a 1080p feed and let the 4K TV do the upscaling. I tried that and the outcome was noticeably fuzzier, even though the TV has no problem upscaling movies. Stick with the on-board upscaling and you’ll be fine.

Is that enough? The hardcore crowd would justifiably point out that upscaling 4K is the same thing as faking it. They may also point out that a decent gaming PC could get you native 4K, which looks better.

A casual console gamer may not be so picky, however. If you own a 4K TV and you plug in an Xbox One S, I reckon you’ll be impressed. My library of games have never looked this good.