Even if you have only a passing interest in video games, you’re probably aware of the issues regarding Sony’s decision to spec the PS3 with a Blu-ray drive. Not only did the inclusion of Blu-ray make it impossible for Sony to hit its intended release date (in Europe at least), but it also made the console itself rather more expensive than most consumers would have liked. 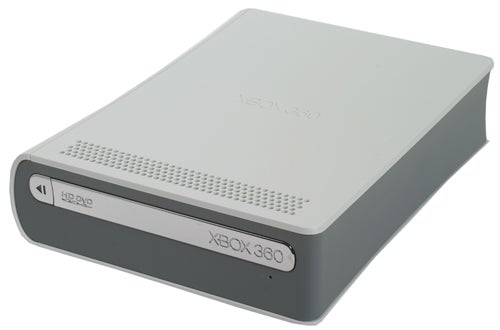 Microsoft on the other hand decided not to equip the Xbox 360 with either of the next generation optical formats, instead opting for a humble DVD drive. This meant that anyone wanting to buy an Xbox 360 just to play games didn’t have to pay through the nose for hardware that they didn’t actually want. Instead Microsoft announced that it would release an HD DVD add on drive, so that if anyone wanted high definition movie playback functionality, they could just bolt it on later. And that’s exactly what I’ve got in front of me right now.


The HD DVD drive is designed to stand next to the Xbox 360 if it’s positioned upright, or sit on top of it if your console is laid flat. The HD DVD drive matches the finish of the X360 perfectly, so despite being a separate unit it’s still aesthetically pleasing. The drive requires an external power supply which comes in the box, but thankfully it’s far, far smaller than the console’s gargantuan power brick. 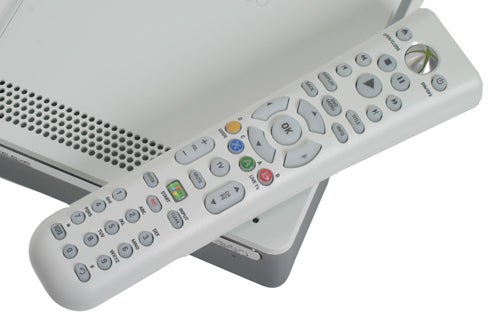 The HD DVD drive connects to the X360 via a simple USB to mini-USB cable, which comes in the box. Don’t worry about losing the only rear mounted USB port on the Xbox 360 though, because the HD DVD drive gives you two more ports, leaving you one USB connector better off. Once you’ve connected the drive, the X360 will download the necessary update automatically. Once loaded you’ll be greeted with your usual Dashboard interface, but with one small difference. The Eject Tray icon at the bottom is now split into two sections – the top half will eject the DVD drive in the X360, while the bottom half will eject the HD DVD drive.


Also in the box is a full AV remote control – I say full, because it’s a bit longer and more comprehensive than the small AV remote that shipped with early X360 consoles. It’s a good bundle though, considering that even the Premium pack 360 doesn’t come with a remote control anymore.

Microsoft bundles King Kong with the drive and I’ve got to say that this was a very wise decision. Firing this movie up really shows just how good HD DVD is, and when I compared it directly with the DVD version it made me wonder how I could have ever watched such a format! Seriously, this disc looks stunning and far better than anything I’ve seen on Blu-ray so far. In fact the picture is so sharp on the King Kong disc that it actually undermines the CGI in the film! Watching the scene where Naomi Watts is running from the dinosaurs and the consequent battle with Kong highlights this issue, where the green screen work is blatantly obvious – something that is in no way apparent when watching the standard DVD. 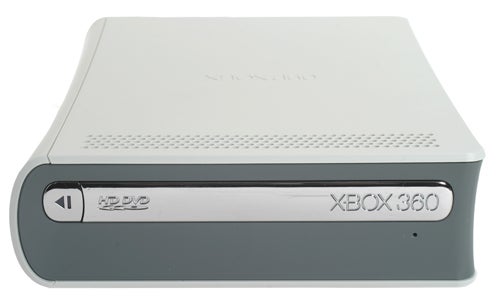 I have to say that I wasn’t really expecting this drive to pull off truly impressive image quality, but I’m happy to say that my preconceptions were proved unfounded. Despite the fact that this is an external drive feeding its data to the Xbox 360, which in turn is pumping the video signal out through a component connection rather than HDMI, the image quality is very, very good. This drive is also multi-region for HD DVD discs. I fired up the US version of Apollo 13 and the drive didn’t miss a beat.


This drive is also helped by the fact that the early HD DVD discs are generally better quality than the early Blu-ray movies. This is due to a number of factors, not least of which is the fact that the early Blu-ray discs are single layer, while the HD DVD titles are dual layer. But the extra capacity isn’t the major issue, it’s the choice of codec – whereas the first generation Blu-ray movies are encoded using MPEG2, HD DVD titles utilise the VC1 codec. 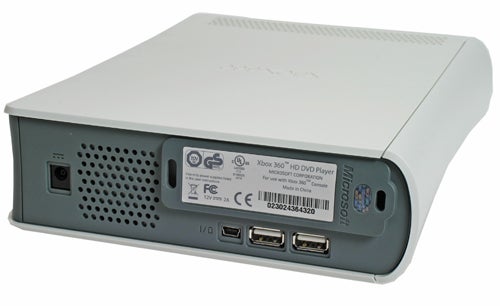 The best thing about this drive though, is the price. At £129.99 it represents a very affordable avenue into high definition video. Now, the PlayStation 3 fans will be in uproar right now, screaming that an Xbox 360 with the HD DVD drive is almost as expensive as a PS3, and they’d be right. However, the point is that if you already have an Xbox 360, this is a cheap and easy route into HD movies. If you bought your Xbox 360 a year ago, you can now add more functionality to it for a very modest outlay.

But it’s not all a bed of roses, and there are a few issues with this setup if you’re really into your movies. For a start the Xbox 360 is pretty damn loud in the first place, and the HD DVD drive just adds to that noise. If you’re watching a movie late at night, the noise from the combined hardware can be very intrusive during quiet scenes – and I’m used to watching my Sky HD box, which isn’t the quietest bit of kit either! 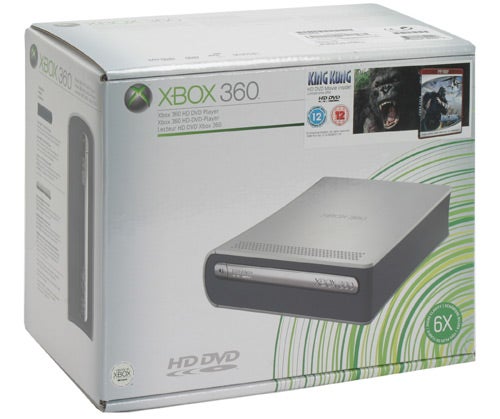 The other problem is the impending format war that is scaring consumers everywhere. Do you want to start replacing your DVD collection with HD DVD discs even though it might not turn out to be the surviving format? It’s a tough call right now, but I’ve got to say that I’ve been pretty impressed with what I’ve seen from HD DVD so far. Compared to Blu-ray, HD DVD is definitely a more affordable option, while the quality and selection of discs is also superior.


Microsoft has done a good job of providing high definition movie functionality at a very affordable price. Yes, if you add the cost of this drive to the cost of an Xbox 360 it amounts to a fair wad of cash, but if you already own an X360 the price of the drive is pretty attractive.


The amount of noise emanating from the console and the drive can be an issue and the lack of HDMI may be a deal breaker for the movie purist, but then that kind of user isn’t ever going to watch films on a games console anyway. Ultimately though, if you’ve bought an Xbox 360 and an HDTV to go with it, £129 isn’t a lot to ask to add HD movies to your set up.