As you may remember from last years crop of comic-book movie tie-ins (see Hellboy: The Science of Evil, Iron Man and The Incredible Hulk), games based on films based on superhero properties are rarely any good. X-Men Origins: Wolverine had the potential to be different.


For once, it seems to have been developed by a group of people who were committed to the project, who had the technical skills to do it justice, and an understanding of what makes this much-loved character tick. This is easily the most blood-splattered, endless violent, dynamic take on Wolverine I’ve ever seen on the screen. The 18 rating has freed Logan from the shackles that have consistently held him back even on the silver screen (and that’s not in any way to fault the first two X-Men films or Hugh Jackman’s excellent performance in them). 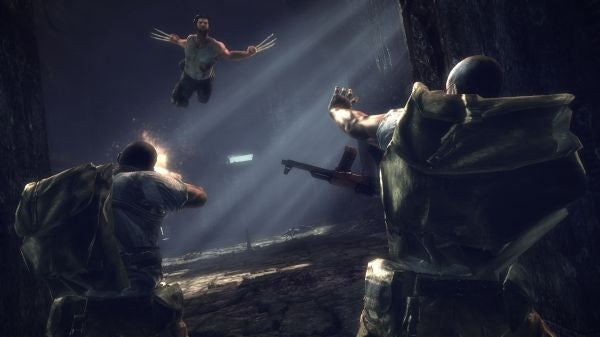 Unfortunately, that doesn’t actually mean that the game is all that great.


With the X-Men Legends and Marvel: Ultimate Alliance games behind them, Raven Software has a pretty good track record in the superhero game arena, and with Wolverine it has got an awful lot right. The last X-Men game, based loosely on X-Men: The Last Stand, didn’t know what to do with the character bar send him through an endless, plodding series of brawls, battling from one dull chamber or corridor to the next. It was a game so dull and repetitive that I literally fell asleep while working my way through it.


Wolverine ups the ante considerably, mainly because – like Hellboy: The Science of Evil – it’s an unashamed rip-off of Sony’s mighty God of War. The action now comes fast and furious. There are platforms to navigate and the odd puzzle to solve. The combat system is relatively simple, but allows you to pull off a wide range of moves, and it was designed by somebody who knows that Wolverine isn’t the sort of guy who wanders up to foes and hits them repeatedly, but the sort of guy who leaps, pounces, slices, stabs and dices until he’s the last man standing in the room. Like God of War, this game also isn’t afraid of a little gore. Limbs are hacked off; Adamantium claws are visibly thrust through mortal bodies. The claret flies just about everywhere. 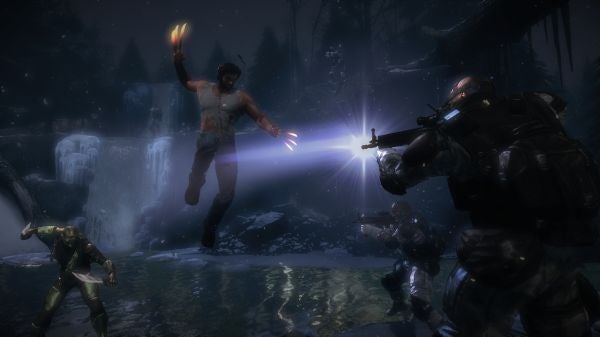 What’s more, this is easily one of the best-looking superhero games to date. Raven used the Unreal 3 engine for Wolverine and we get detailed environments, rich lighting and all the glossy surfaces or lush jungle vegetation you could wish for. Raven has even gone big on reproducing the ‘regeneration’ effect we’ve come to know from the movies, with Logan’s flesh torn away from his bones by sword attacks and repeated gunfire, only to grow back before your waiting eyes. The character modelling and animation is generally great, with the man himself bearing a more than passing resemblance to Hugh Jackman (unlike the digital Robert Downey Jnr in Iron Man last year).

You’ve also got to love the game’s grisly slow-mo effect, used every time Wolvie dispatches the last of another wave of enemies, allowing you to witness their destruction in all its blood-spraying clarity. It’s a shame that Wolverine’s skin is a little plastic looking, and I encountered some fearsome spots of slowdown in the PS3 version reviewed, but when so many superhero games look like HD ports of a PS2 version, at least Raven bought it’s A game to bear on this one. 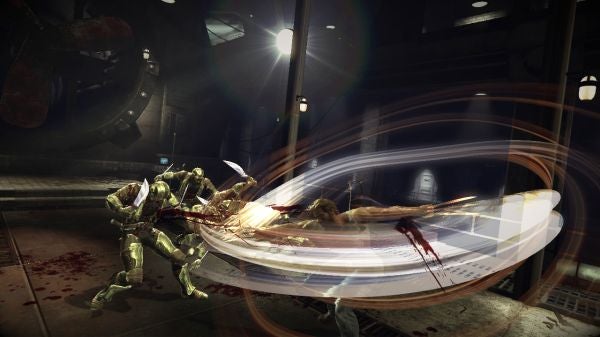 There’s also a little more depth and strategy than you’d find in some examples of this genre. Like God of War, Devil May Cry or Onimusha, Wolverine uses an experience system, whereby slashing enough goons into bits levels our hero up. On levelling up you can spend points on health or combat abilities, and as the game goes on it introduces new special attacks, enabling Wolverine to carve up huge swathes of foes in a circle of bloodshed, or drill his way through particularly tough opponents, provided he has notched up enough ‘rage’ to do so.


Meanwhile the lunge ability, introduced at the outset, becomes key the more the game moves on. Press the top-right bumper on your controller and our hero focuses on an enemy. Click top left and he leaps right at them, and you can combine his initial pounce with a selection of other blows to do as much damage in as little time as possible. Lunging is vital when tackling large or spread out packs of enemies, enabling you to move fast, avoid suppressive fire and deal with the pesky ninja-style forces or rocket-launching fiends you’ll encounter more frequently as time goes on. Finally, a system of Mutagens allows you to customise Wolverine to your own preferences or for different situations, putting damage-resistance over offensive power, or boosting Wolverine’s existing ability to learn from and then deal more damage to specific enemies as he encounters them. 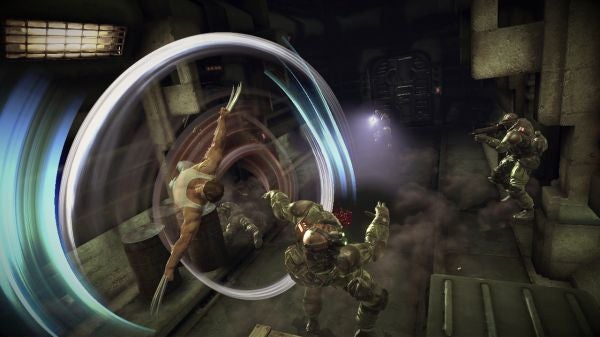 Sadly, all this great stuff is let down by the fact that the whole experience wears thin within a scant few hours of play.


It all comes down to pacing, scale and variety. I think that, say, God of War 2 or Devil May Cry 4 succeed because they know how to combine periods of heavy combat, quieter moments and big, in-your face blasts of epic spectacle into one long stream of action. They structure their waves of enemies so that, even though you’re effectively doing the same thing over and over again, you’re always facing new challenges and you rarely get a chance to get too bored. Wolverine doesn’t quite manage this. Sure, it has some great big moments. True, there are whole sections that are paced with real expertise. All the same, the more you play, the more the game feels repetitive and increasingly lacking in ideas. 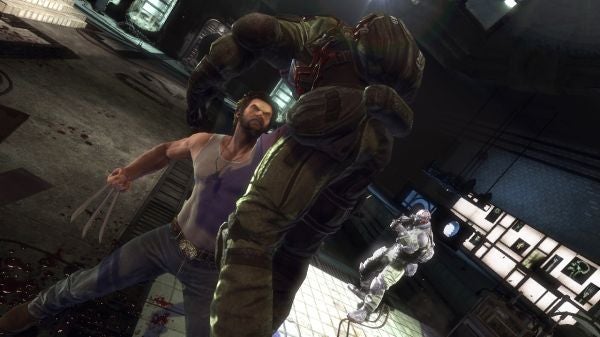 I think Raven knew that variety was needed, because it has cleverly interleaved two storylines – one based loosely on events in the film, the other on a military mission in Africa three years before – so that they can flick between them as the game goes on. There are differences between the two. The levels in the present timeline focussing on straight combat with the odd twist of stealth, while the levels in the past timeline take the occasional detour into Tomb Raider territory, with crumbling temples to explore, traps to avoid and simple puzzles to solve. We even get two distinct groups of enemies to fight.

However, when it comes down to it, it all still feels much the same, and the differences between one mass brawl and the next become less distinct the more you play. And where did all these grunts come from? In the average level you’ll kill literally hundreds of troops and special forces types, making you wonder whether arch-villain William Stryker has co-opted half the US army to his aims. More seriously, the game starts throwing in more and more boss encounters as time goes on, and as the vast majority of these are reliant on the same basic tactic, they end up doing nothing except halting the flow of the game. 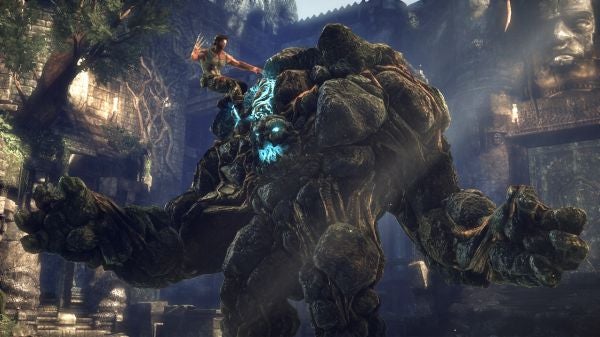 Above all else, many of the levels suffer from repetitive scenery – with the levels based in and around the secret base at Alkali Lake suffering worst – and nearly all of them go on long past their expiry date. I don’t know about you, but when I feel relief that a level is over I want to feel it because I’ve been challenged and pushed and pressed to my limits, and I’m looking forward to seeing what comes next. I don’t want to feel relief because I was plain sick and tired of looking at the same old locations and dispatching the same bunch of foes again and again and again. It’s just no good.


Had I only played Wolverine for an hour or so, I might have come away thinking that it was a derivative but entertaining spin on God of War, and if you play it in small chunks, you might still get that kind of impression. But, at the end of the day, it’s not actually that engaging in the long-term and you’ll find that reflected in the score at the top of this review. It’s nowhere near as awful as Iron Man or The Incredible Hulk, but that doesn’t mean I’d recommend you buy it. Sometimes you can have all the pieces in place for a great game, but somehow fail to make them fit together in a satisfying way. Wolverine, unfortunately, is a case in point. 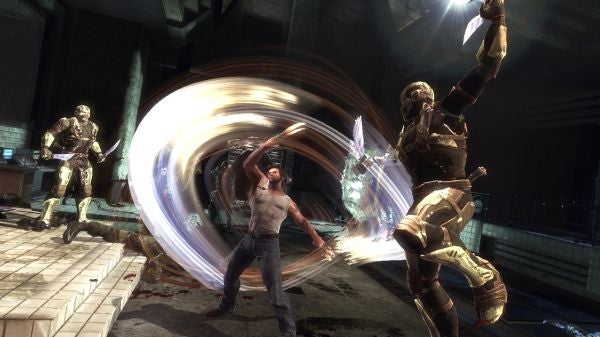 
Kinetic, aggressive and violent, X-Men Origins: Wolverine is close to being one of the great superhero games. Unfortunately, it’s just not engaging enough in the long-term to make that grade.