Available to download from Xbox Live Arcade
This the game is effectively a Kinect-powered 3D variant on Angry Birds is not Wreckateer’s biggest problem. While it’s certainly been inspired by Rovio’s blockbuster, to the extent that Microsoft might as well have called it ‘Grumpy Goblins’ and had done with it, a lot of thoroughly brilliant games have taken inspiration from other games and simply added their own spin. It doesn’t matter so much whether Wreckateer is effectively Angry Birds: Kinect, as long as it’s a good Angry Birds: Kinect. But is it? 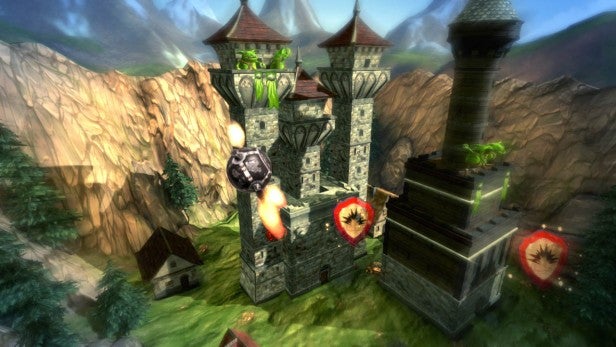 The setup is as simple as its inspiration. A bunch of goblins have invaded the castles in your kingdom, and it’s your job to get behind a big ballista and smash them out. Using a selection of ammunition, you can level every wall, keep, tower and outbuilding, earning points for your destruction and for any goblin that meets a messy end along the way.

To make things easier, the goblins have glued great bundles of explosives to key surfaces, and their icons floating in the air that, should you hit them, boost your score. You don’t actually have to blast every goblin to win, just reach a high enough threshold to earn a bronze, silver or gold medal.

Know your Projectiles
There are six different types of ammo available, kicking off with your common or garden cannonball, then going through flying shots that you can guide to their target and speed shots that suddenly accelerate when they’re activated. Bomb shots explode soon after impact or when activated in the air, while lift shots are heavy, short-range missiles that can be boosted higher three times to give them enough oomph to hit something useful. Finally split shots transform on command into a chain of four linked cannonballs, which can be steered to wreak havoc across a stretch of wall or several towers. The Kinect controls are both easy to pick up and – mostly – effective. You arm your ballista by stepping forwards, grabbing the current payload and dragging it backwards to tension the string. You aim it by stepping left and right to rotate the war-machine, then throw your arms clear to fire off your projectile.

Missiles can be swatted left and right or up and down to steer them after release, while certain ones are activated by throwing your arms out in a Y shape. The scheme isn’t faultless, with a failure of the activation gesture the single biggest cause of complaint, but it’s a big improvement on many other Kinect games. For the most part, Wreckateer just works. 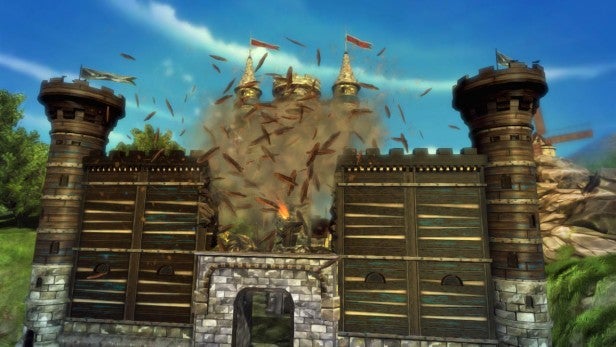 Just One More Go
More importantly, it’s fun. It takes a while before smashing castles and splattering goblins even starts getting tired, and Wreckateer can be hugely addictive. While you might start off scraping levels with a bronze, you’ll soon find yourself aiming for silver or gold, and when you miss out on a medal by a whisker you feel compelled to have, well, maybe just one more crack.

What’s more, there’s a layer of strategy beneath all the mindless destruction. Would the flying shot be better used hitting bonus icons, or targeting a hard to reach tower? Is it better to go for the central keep straight away, or leave it until you’ve racked up a bigger bonus multiplier? Wreckateer isn’t nearly as dumb as it looks.

However, while it’s a fine Kinect game, it could be so much better. Part of the problem is that the game arguably gets less fun as it goes on. In the early stages you can simply enjoy the mass destruction while racking up the points, but the further you go into the second half of the game, the more it becomes less about simply wrecking the goblin’s joint, and more about making optimal use of hard-to-hit bonus icons and wrecking the joint in the optimal point-scoring order.

In some levels you can barely leave a stone standing, yet still lose out because you wrecked too much of the stonework before you had a chance to build up your multiplier. You’re left feeling that you can’t wreck things your way, you have to work out the way that the designers intended. 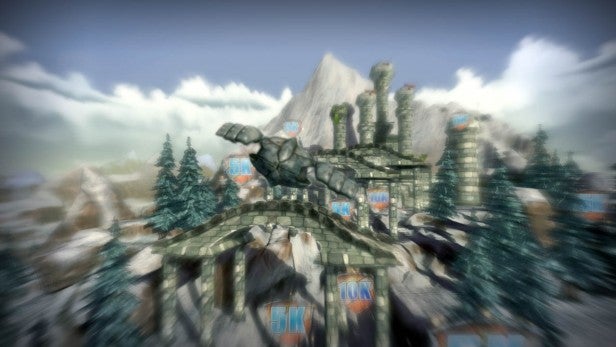 Unconving Physics
It would also be a stronger title with a more believable physics engine. It’s not just that the destruction doesn’t look right – it’s also frustrating when a tower fails to collapse even though it’s hanging on to a keep by a thread with no visible support. Sometimes structures above a point hold firm even when you’ve obliterated everything below. In a way, Angry Birds does things better, because you can predict how an object will behave if hit by a certain bird in a certain way. In Wreckateer, you can never fully predict how your actions will play out. 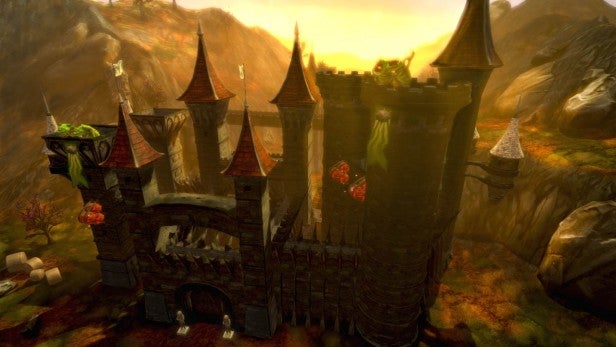 As a result, the game gets frustrating – even a little boring – and is best played in chunks. Come back refreshed, and you’ll start to enjoy it once again. It’s not a great-looking game, but the graphics have a certain cartoon charm, and there are some nice touches, like the way the goblins behave when a projectile zooms close-by, or that you play as your Xbox Live avatar, not some generic fantasy hero. It’s a shame that the multiplayer options are so limited, however; Wreckateer could have been an excellent deathmatch or co-op game. 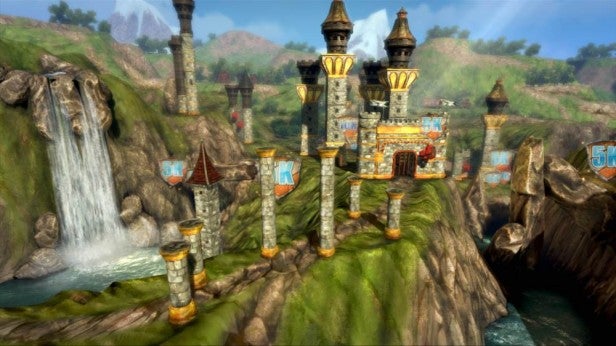 Verdict
Wreckateer comes close to being a great Kinect game, but dubious physics, average graphics and a tendency to lock you into one solution as the game goes on all spoil the party. All the same, all the wanton destruction is a lot of fun, the lure of a higher score addictive, and the game still has plenty of charm if played in small chunks. At 800 MS Points it’s also cheap enough to be a must-buy for anyone with Kinect. A missed opportunity, but hardly a wreck.