What is the WowWee MiPosaur?

The MiPosaur is a robot dinosaur from the creator of the venerable RoboSapien range, beloved of modders for more than a decade.

MiPosaur can be controlled via hand gestures, the supplied ball or even via an app for iOS or Android, but it’s equally happy to roam around and explore its surroundings.

It isn’t cheap, but it has just enough tricks to make it seem good value – even for big kids. 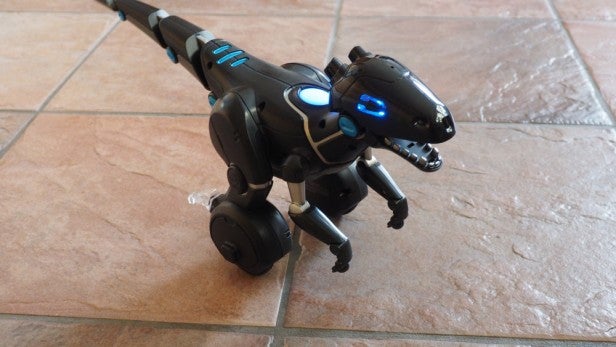 As with all previous WowWee robots, MiPosaur isn’t trying too hard to look like the animal it (sort of) mimics. It’s undeniably dinosaur-ish, though, taking obvious inspiration from the raptors that shot to fame in Jurassic Park.

At the bottom of each foot is a wheel upon which it balances through the use of gyros – much like a Segway or those new hoverboards that don’t actually hover.

Flip the MiPosaur over and you’ll find the battery compartment for four AAs; it’s protected like Fort Knox by three crosshead screws. Just as well the batteries last a fair while.

On MiPosaur’s back is an LED that changes colour depending on your robo-dino’s mood. Orange means excited, blue curious and red annoyed, with each emotion affecting how likely the MiPosaur is to respond to your commands.

The other major element of MiPosaur is the trackball, which features a six-way mode dial, eight IR senders, an on/off switch and a status LED. It takes four AAA batteries, held in by a further two screws – keep your toolbox handy. 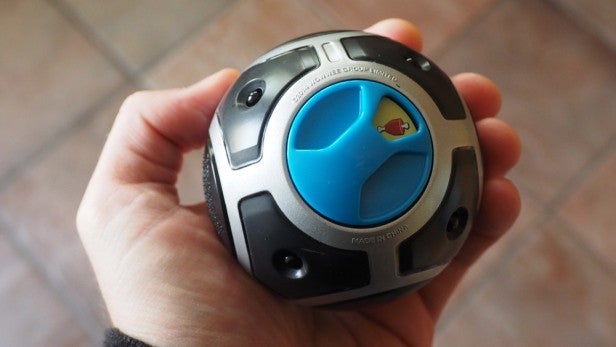 Upon powering up the MiPosaur, I was a little confused at first: it just kept flashing at me and didn’t actually do much. It turned out that was at fault. The MiPosaur has to be placed on its wheels only, not resting back on the little struts sticking out of its legs.

With that corrected, MiPosaur happily rocked itself back and forth on its wheels, making charmingly robotic noises and awaiting my commands. To my surprise, it got bored of waiting for me to check out the relevant hand gestures and started wandering around the house.

It bumped into a few things along the way, but it also stopped itself from whacking the walls, reversed and turned to find clearer routes. It definitely preferred harder floors, so be wary if you have deep, shagpile carpet in your home.

I tried out the ten assorted hand gestures to control MiPosaur, but found them to be rather hit-and-miss. Waving a hand down either side of its head tells it to turn one way or the other, and you can also get it to spin 180 degrees, sit or do various shimmies and shakes.

I managed to get all of these gestures to work at some point, but they usually required multiple attempts, so it wasn’t a wonderful experience.

Thankfully there are two other, much better ways to control MiPosaur. 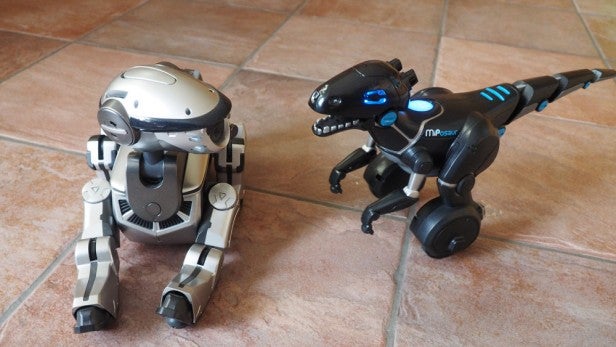 As mentioned, the supplied ball has six different modes accessible via a dial on the ball itself: Food, Dance, Beat Box, Leash, Ball, and Teddy Bear.

By far the most interesting of those are Leash and Ball. The former creates a virtual piece of string between the trackball and MiPosaur, so that your robo-friend follows you around.

Ball turns the ball into a, er, ball. But one that the robot can sense. MiPosaur chases it around and knocks it about, acting like a whizz-wheeling puppy, and it can even have a little kickabout with you. It’s very cool, but requires plenty of room – not great for little boxy bedrooms.

Shaking the ball in Dance mode makes MiPosaur spin and pop around like a disco diva to some dodgy techno, while Beat Box makes it spew out a load of robo-sonics and the odd growl whenever it gets near the ball. I could easily live without the latter mode.

Food enables you to virtually feed the MiPosaur using the ball, resulting in some interesting sound effects when it chows down. Teddy Bear turns the ball into the MiPosaur’s new favourite toy that it doesn’t want to part with.

If that lot isn’t enough to keep you entertained, you’ll want to download the MiPosaur app for iOS or Android. 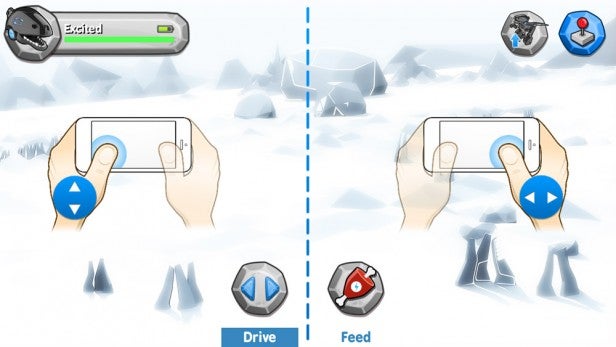 The app enables your phone to connect to the MiPosaur over Bluetooth, so you can remotely control it entirely from your touchscreen. You can also feed it a variety of imaginary snacks by swiping them up off the top of the screen, and instruct the MiPosaur to take a particular path by drawing the route on the screen with your finger. If you’re old enough to remember programming a Big Trak to trundle across your bedroom floor, this will bring back fond memories.

There’s also a Dance option that mimics the same mode as you can select from the ball. 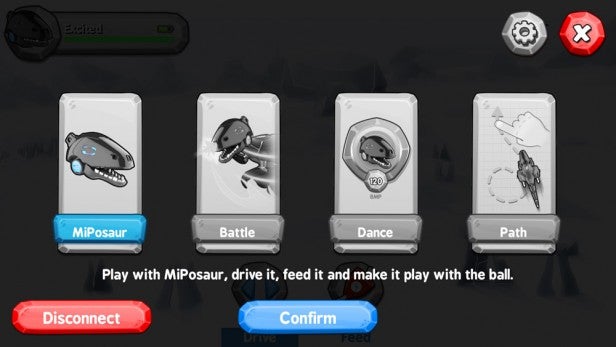 One thing I didn’t get a chance to try out was the Battle mode, where you can supposedly pit more than one MiPosaur against another or fight with one of WowWee’s other ‘bots. But I’ll be sure to update this review if I ever get to give that a go.

Should I buy the WowWee Miposaur?

If you discard any knowledge that the MiPosaur responds to hand gestures – because it just doesn’t do it well enough – you’d still be happy with the remaining functions.

It has plenty of character, a companion app that makes it fully remote-controllable, and it offers tons of robotic interaction for the money.

A truly fun toy that has plenty to offer children and grown-up robotics fans alike.