World of Warriors is a bit of an oddity: a four-year-old mobile game of turn-based combat transformed into a family-friendly PS4 brawler. The look of the game, with its bobble-headed cartoon fighters and simple, cel-shaded graphics has transferred, along with the focus on collecting and training a bunch of the world’s greatest warriors. But where the mobile game had you picking moves and using power-ups turn-by-turn against your foe, the PS4 version is a weird kind of 3D arena-based beat-em-up with echoes of Capcom’s much-loved PowerStone, various Dragon Ball games and the Field Phase part of Pokken Tournament. Weirdly, there’s something about its global range of historical fighters that also reminds me of SoulCalibur or even Ubisoft’s For Honor, though calling it For Honor for kids might be a stretch too far.

The deal is that you unlock fighters from the Temple of Epics in the game’s central town, gear them up with perks and potions then take them out to battle in the different regions of the wildlands. The more your warriors fight, the more they level up, giving them more health, stamina and mana and increasing the damage they can do. Victories in combat win you gems you can use to unlock more warriors, including rare and legendary bruisers who start off at higher levels. While there is some kind of vague background story of heroism and ancient evil, you basically work your way through the wildlands, keep adding to your roster and see if you can collect the set.

The combat looks deceptively simple. In most of the game’s battles you field a team of two warriors, one entering the fray when the other is knocked out. You move in full 3D from a zoomed-out isometric perspective, dishing out blows with the square and triangle buttons, dodging with X and pressing circle when you’ve amassed enough blue mana globes to unleash your warrior’s special attack. You can also sprint with a squeeze of L1 or block with a grab of L2. Time your block perfectly and your enemy staggers, giving you a chance to strike back with a vicious flurry of attacks. 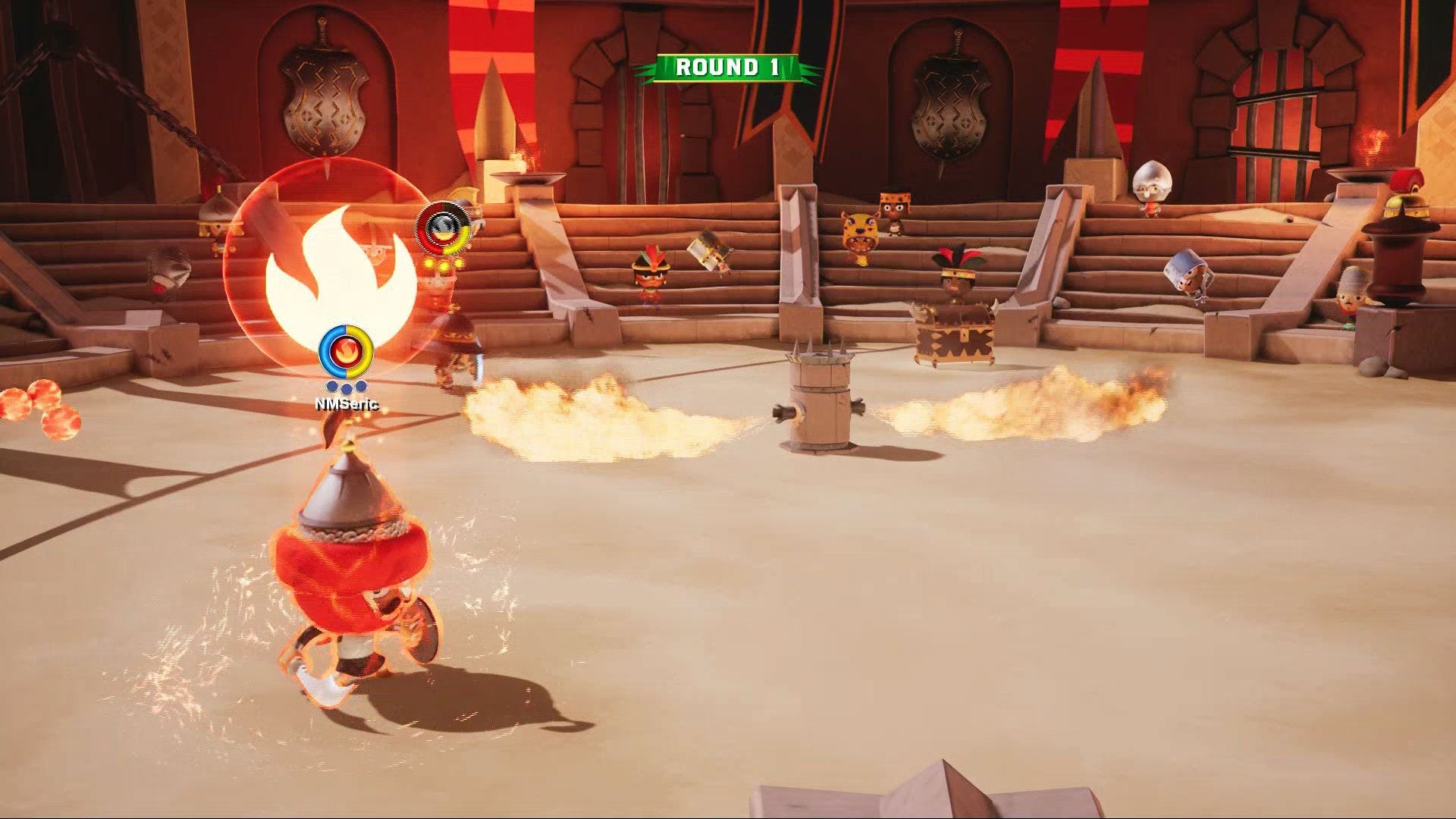 Secondly, the arenas themselves have their own special rules and idiosyncrasies. One might have a water titan slinging a gigantic anchor across the ships decks. Go and smack the anchor while embedded in the timbers and it might fly out and strike your foe. Another has a creepy tree with roots that can be persuaded to reach out, grab your enemy and smash them into the ground. In some cases, playing the arena can be easier than attempting a more straight-up fight.

At various points, chests might appear, dispensing materials you can use to craft more items back in town or items that can heal or recharge. Finally, each wildlands region has its own special events, that might see you fighting multiple enemies in all-against-all combat or attempting to blow up a giant spider with cannon fire before it wraps a warrior in its web. Reach the end of a region and it’s boss battle time, pitching you against one final special event or against two particularly badass warriors who, when beaten, join your team. 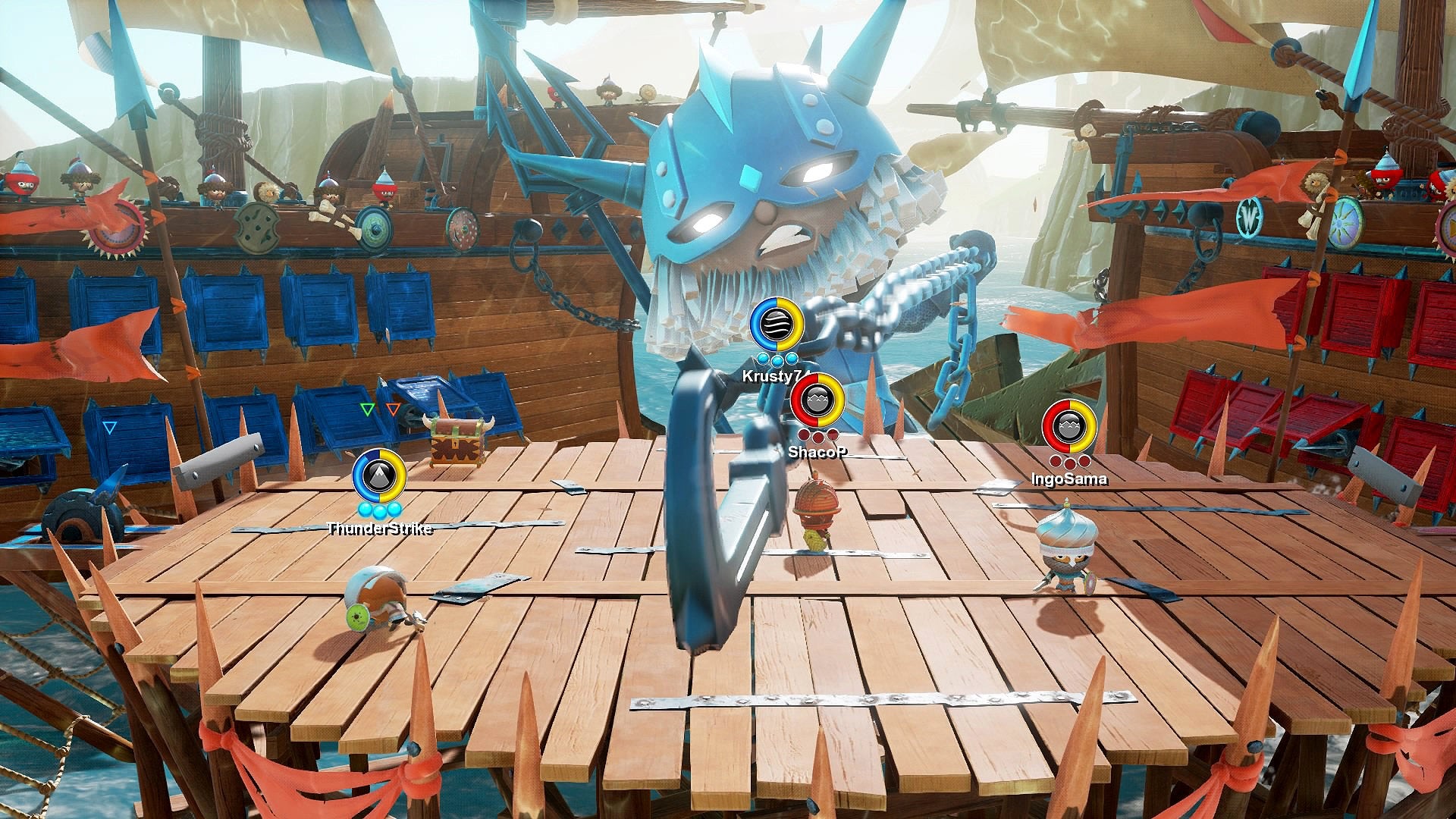 For a few hours, World of Warriors is fun. There’s not a whole lot of depth or variety to the action, but each new warrior has his or her own strengths and a signature special move, while some of the foes you face need a distinct strategy, pushing you to play it safe, dodge and counter, or to go in hard with a brutal string of attacks. Each new region brings new arenas and mechanics, and there’s a sense of achievement in levelling up your warriors, earning new recruits and collecting materials and crafting gear. There’s enough here for younger gamers to get their teeth into, but not so much that it becomes imposing.

It also works well as a two-player game. While one player takes the lead and makes all the decisions, you can opt to bring a second in for all the battles, turning the bouts into straight two-on-two brawls and adding a little chaos to the mix. And while you can’t play co-op online, you can join battle with other players through online matches and leagues, giving you the chance to pit your best warriors against the world’s.

All the same, there’s something a little hollow at the heart of World of Warriors, not to mention something uncomfortably grindy. The warriors are varied but not really that distinctive; while there are differences in speed or the ferocity of attacks, none seem that memorable or imbued with real personality. There are forty to collect yet few stand out. Some of the matches are extremely tough unless you keep pushing one or two warriors through repeated battles so they level up, or unless you keep going to earn gems to unlock a higher-level fighter. 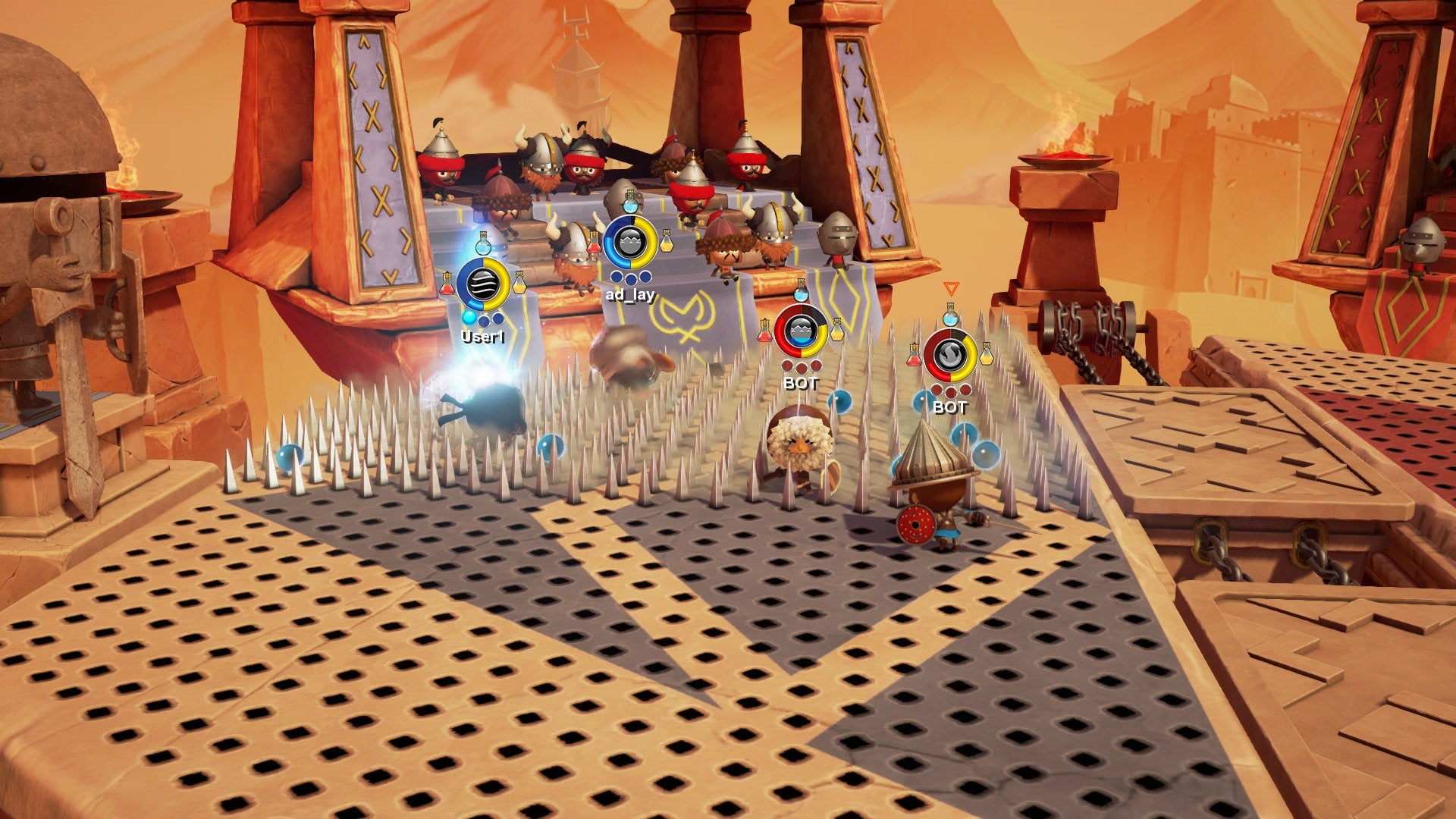 The warriors come in sequence, so you can’t skip one to save your points for a later hero, and while you can forge perks and potions in the foundry to kit your warriors out, the perks aren’t permanent. There’s no feeling that you’re really upgrading their gear.

And there’s no getting away from the fact that World of Warriors is repetitive. It’s exciting to open a new region, but not so exciting to battle in the same arenas or run through three variations on the same special event before you can progress. Throw in a couple of really irritating difficulty spikes, and you have a game that’s, well, alright but never all that great.

I’d still cautiously recommend it to anyone looking for a cheap, fun game to keep a couple of kids busy over a wet weekend. They might get more from the line-up of warriors and there’s always the lure of another fighter to collect. Otherwise you’re looking at a forgettable arena brawler, good for a few hours but nothing more.

Verdict
Got a household of bored kids on a rainy weekend? World of Warriors has just enough charm and interest to keep them busy for a day or two. Yet while it has depth and a few good ideas, it’s not compelling enough or varied enough to hold their interest for any longer. It has a whole bunch of warriors, but not the heart or soul of a great fighting game.