WARNING: What follows is one man’s subjective opinion of his time spent in World of Warcraft: The Burning Crusade. Your experiences and opinions may vary.


Sorry, but I felt I had to do that at the start of this review. Even before The Burning Crusade, writing a definitive review of World of Warcraft was almost impossible; so much depended on what you were looking for, how frequently you played, what level you achieved and who you played with that – once you got past the basic game mechanics, the graphics and the technicalities – you might as well review, say, a week in New York, a visit to the Louvre or a month inter-railing in Europe. 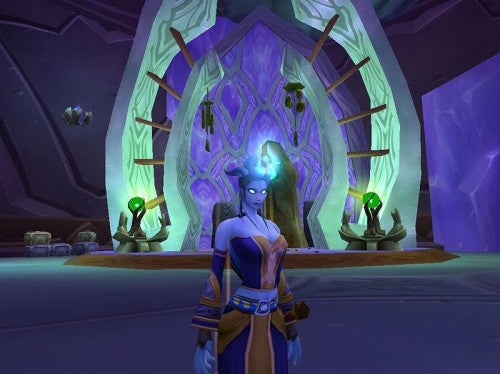 
So let’s assume for now that, if you’re a high-ranking level 60 demigod who already devotes ten or more hours a week to WoW, then you bought The Burning Crusade two weeks ago and are already scouring The Outlands for elite mobs and new drops. Good for you. We’d love to hear about what you’ve done and how much you’ve enjoyed it so far. If, however, you’ve resisted the urge to join the Burning Crusade up to this point, then you probably want to know whether it’s worth a) buying it and reviving that lapsed subscription or b) using it as an excuse to play WoW for the first time. 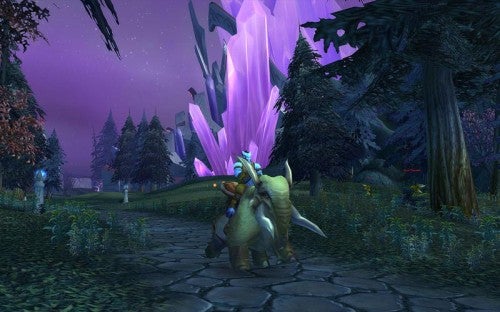 Well, the answer to both is a qualified ‘yes.’ Qualified for old players, because this isn’t a revolutionary expansion by any means. If you found the core game’s emphasis on quests, item drops and levelling slightly tedious, The Burning Crusade isn’t going to change your mind. If you’re sick to the back teeth of murdering a specific number of monsters and collecting a specific number of items from their corpses, do yourself a favour and buy something else. It’s also a qualified ‘yes’ for new players, because you could just as easily start with the core game (which you’ll need anyway) and decide whether you needed The Burning Crusade later on. That said, there’s no question that the new races offer a thoroughly enjoyable way into the game, and that if you liked World of Warcraft in the first place, The Burning Crusade will remind you exactly why – in spades. 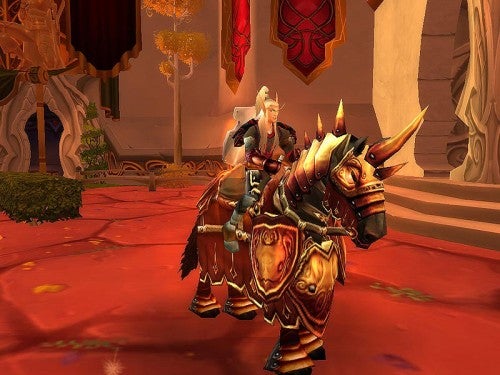 Even low-level players will find a lot of content to enjoy here. It’s easy to forget that two new races, the Draenei and the Blood Elves, don’t just mean new faces knocking around Azeroth but two completely new opening campaigns, but that’s exactly what we’ve got. As with the original game, these take you through from novice to intermediate experience levels, steadily introducing you to the mechanics of combat, questing, buying and selling, while also slowly exposing you to the wider world.

The core game already did this very well, dishing out simple critter-mugging missions to start with, then using quest-givers and contacts to move you out to other areas, all the time opening your eyes to the world at large and all the options you had within it. If anything, The Burning Crusade does this even better, with less aimless wandering and more opportunity to stack up quests within a given locale. 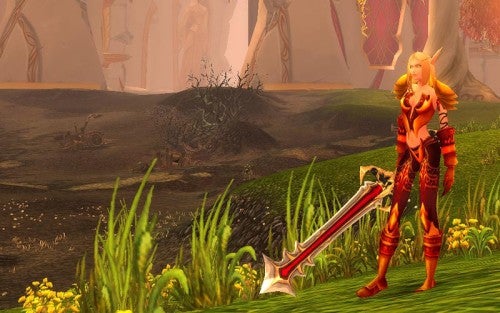 Sure, there are still a lot of ‘batter 12 vermin and bring back their teeth’ missions in the early stages, but they’re not generally too transparent. Even in the early stages, there are fun quests – a find the totem chase, a bizarre spot of espionage, a mounted sprint to alert leaders of coming troubles – and these give you a great feeling that there’s more to this game than just grinding. Look at the other players around you and two things hit you immediately. Firstly, that after a long time in which the gap between casual players and hardcore players was turning Azeroth into a slightly intimidating place for occasional visitors and newbies, it’s good to have everyone at a similar stage discovering new things. Secondly, you’ll note that everyone is really having fun doing so. 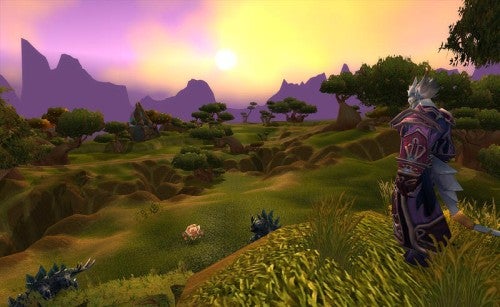 Blizzard has also done a great job of integrating each race’s quests into wider themes. In the case of the Draenei, for instance, we have a bunch of noble blue-skinned, extra-terrestrial giants who have crash-landed their ship on Azeroth and are vaguely mortified by the effect this has had on the neighbouring fauna and flora. This means that a lot of the early quests seem centred around repairing the damage done and making friends with the locals, whether they’re alliance forces or elemental powers.


The Blood Elves, meanwhile, are a bunch of magic-crazed misfits clawing desperately to hold onto the remnants of their land and culture, and this is expressed in their opening quests. The two races could have felt tacked on, but Blizzard has worked hard to massage their story into the bigger picture, with later Draenei quests pitching them against a bunch of Blood Elf spies and putting the player increasingly in cahoots with Alliance forces. Admittedly, there’s some rather forced teleportation stuff to integrate the new areas into the existing game world, but overall it has all been handled pretty well. 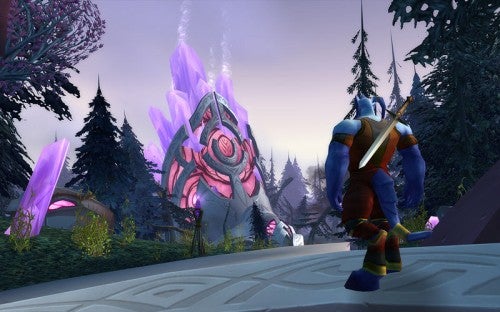 And the new races exemplify what distinguishes World of Warcraft from other MMORPGs. Here, choosing a race and even a class isn’t just a matter of deciding which powers you want more, it’s a statement of intent, helping to define your attitude and your persona. True, each new race has apparent benefits – Blood Elves bring the Paladin class to the Horde alignment and can sap mana from creatures, Draenei can be shamans and have unique healing abilities – but their differences also give you a sense of motivation.

Just as the core game made it seem very reasonable to be a vengeful mouldering zombie warrior, because you knew you had a right to exist even if those damned alliance goodie-two-shoes thought you an abomination, so The Burning Crusade drags you into the worlds of the Blood Elves and the Draenei. Everywhere you go around the Draenei starter zone there are fragments of their wrecked ship, The Exodar, to remind you that you’re a stranger on a strange world, which you’re accidentally polluting. The Blood Elves, meanwhile, are continually mocked by the ruins of their own civilization. You don’t necessarily have to take this stuff all that seriously, but it all helps to build up a potent atmosphere. 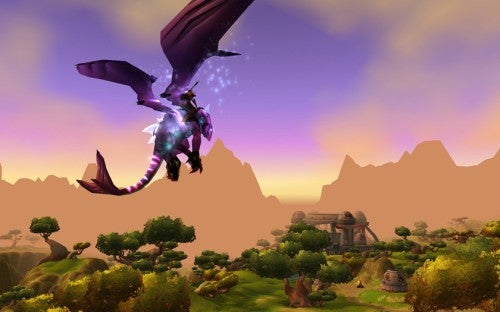 Whereas in other MMOs the game world feels like background, here it really feels important, and that stretches from the historical background to the very look of the game. If you’re coming back to WoW after a spell in Oblivion or Guild Wars, there is an initial sense of disappointment at how plain the cartoon graphics are, how angular the models can be, and how short the game is on complex effects or natural lighting. The Burning Crusade does nothing to update the basic graphic engine, and it certainly doesn’t bring in any revolutionary changes to the game’s overall style. Yet through a combination of great character design and the brilliant, detailed, cohesive world Blizzard has created, you soon forget all about visual technicalities. Azeroth might not look realistic in the sense of Gears of War or a CGI cartoon, but it sweeps your misgivings aside just like a classic Disney cartoon. Somehow, WoW has made leaving the graphics arms race behind part of its distinctive appeal. 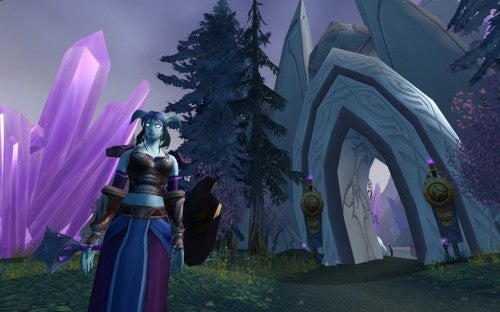 Of course, there are other areas where Guild Wars vets might feel WoW could do with a little rethinking. For one thing, Blizzard’s installation and patching procedure doesn’t seem to have got any better. Installing WoW and The Burning Crusade took me nearly an hour; patching the bloody thing using Blizzard’s downloader took me another three, and it was only later that I realised exactly why veteran players prefer to find a good mirror and download and manually install major patches instead of enduring such a wait. What’s more, at the time of writing I’m still suffering from a bizarre connection issue that prevents me connecting to the game, and from a day or so’s feverish trawling through various technical FAQs and forums, it seems this isn’t a particularly unusual situation. 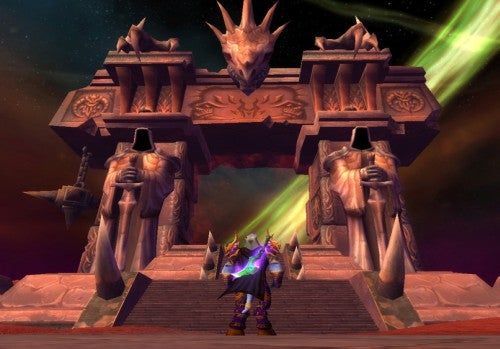 Back in the game, other potential flaws emerge. WoW doesn’t have the solo-friendly features – the henchmen or the heroes introduced in Nightfall – that Guild Wars players take for granted, and those who moan on about ‘World of Walkcraft’ do have a point: between the source and target of each quest there is a lot of repetitive wandering.

Should WoW take a leaf from the Guild Wars book and bring in henchmen and instant map travel? Maybe not. In WoW’s defence I haven’t found much yet in The Burning Crusade (so far) that you can’t solo if you really want to. The walking, meanwhile, helps maintain the world’s feeling of solidity. Oddly enough, there are times when the fast-teleporting convenience of Guild Wars actually pulls me out of the experience and reminds me that I’m just playing a game. Arguably, all that walking helps WoW feel more immersive.


Needless to say, it’s also stupidly addictive. I’m sure the ‘drug’ is slightly different for each player, but for me it’s a combination of the need to explore, the satisfying completion of not-too-challenging tasks and the simple gratification of gaining levels and being rewarded with new arms and armour. 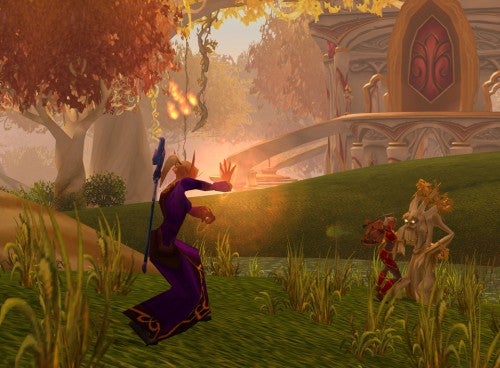 What’s more, the more you get involved with other players, whether in a guild or on an ad-hoc basis, the more compulsive the game gets. For a while I’ve sneered at those who put Guild Wars down on the basis that it’s not a ‘proper’ MMO – so what if the action is instanced? I’m still mixing and fighting with other players and there’s still a reasonable social buzz.


However, the more I play Burning Crusade, the more I have to concede they have a point. There are times when the presence of so many players tears you out of the fiction – don’t worry if another player has just killed Chieftain Oomooroo, he’ll be back again in a minute so you can have a pop – but there’s something about sharing the world with other people, getting cured by a random stranger just as you’re about to collapse, or just swapping tips on a tricky quest that makes you feel part of the world and the larger community. There’s a real sense of people sharing an experience. 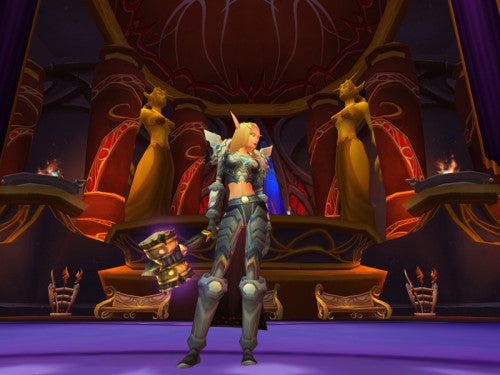 And in the end, that’s where The Burning Crusade triumphs: you want to be a part of it, to be able to say that you’ve fought the worst mobs out there and survived, and that you’re ready for anything the Outlands can throw at you. I’m sure other, more experienced players would be more excited than I am about Jewelcrafting (put enchanted gems in socketed items to boost your powers) or flying mounts (apparently essential for reaching specific areas of the Outlands) or just about the chance to hit Level 70, but for me the appeal of The Burning Crusade is this: it’s hasn’t just convinced me that, by leaving Azeroth behind I’ve been missing out, it’s also given me a second chance to join in. It’s not hard for an expansion pack to keep the faithful happy, but this one can also pull in those whose faith has been lost – what more can you ask for than that?


It may be an essential purchase for the true believer, but The Burning Crusade has plenty to offer both new and lapsed World of Warcraft players. Not a revolutionary update, but a worthy expansion to the world’s best loved MMO.