Available on PC and Mac

Every World of Warcraft expansion has a mission – some objective that goes beyond giving the MMO’s massive fanbase more to do. If Cataclysm was effectively a reboot and 2014’s Warlords of Draenor a back-to-basics effort with added layers of polish, Legion seems hell-bent on pulling back lapsed subscribers and reminding them how much fun WoW can be. For all its new territories, scenarios, systems and character classes, it’s an expansion founded on nostalgia for the good old days. If it does little to disguise how dated WoW can look and feel, it does a fantastic job of reminding you why you once loved it, and why you might do so again.

Let’s get the caveats out of the way. There is no way to do a definitive verdict on Legion at this point. Partly that’s a question of time. This is a huge expansion with masses of content and more on the way. What’s more, there are millions of us playing it and we’re not all looking for the same things. Some love the quest-based PvE experience and regard it as a stepping-stone towards the more PvE- and Raid-focused endgame. Some are hardcore WoW players who’ve been playing regularly for over a decade, while some dip in and out, often when a new expansion launches. Some get hooked on the social stuff, the crafting and the side activities, while others barely notice whole areas of the game. 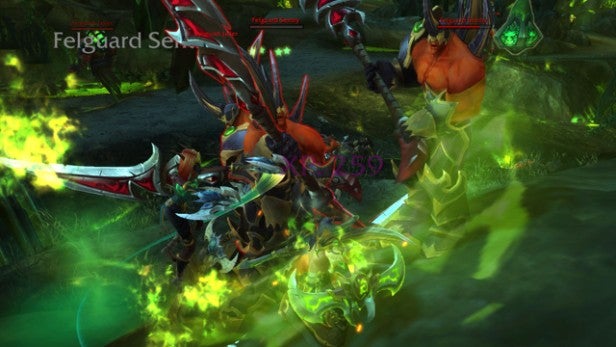 Indeed, with two factions and multiple races and classes, each with their own starter areas and specific questlines, there’s a good chance that your experience of WoW will be very different from mine. In a way, reviewing it’s like reviewing London or New York City from a week-long stay – you can only hope to tackle a slice, not the whole shebang.

Still, there are some things that we can say definitively. For a start, Blizzard has done a lot of work in making both WoW and Legion accessible to the widest possible audience of players. That starts with an early game that’s much more focused on getting you up to speed, exploring and into the action faster, and the bundling of a free Level 100 boost for a single character, enabling players who stopped playing WoW several years ago a chance to catch up and get stuck in.

It extends to making the game much more flexible. Blizzard wants you to group up for Legion and the social stuff is still there if you want it, but it’s also happy to support lone players through solo-friendly quest lines, support for ad-hoc co-op play and excellent matchmaking tools. The result? You no longer have to commit yourself to WoW to make progress and have a whole lot of fun. 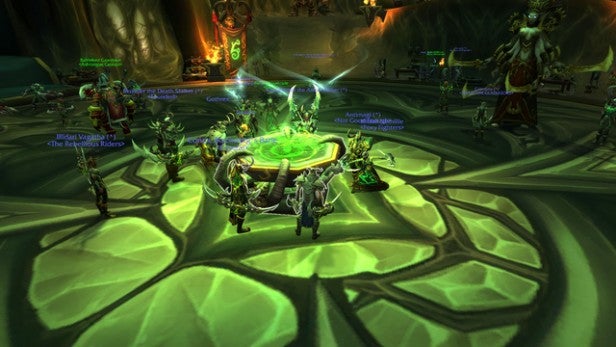 I’ve spent most of my time running questlines solo, but I’ve rarely come across a quest that I just couldn’t handle. In fact, I suspect the systems used to adjust monster levels to match player level goes a little too easy, though large groups and boss enemies can still give your confidence a battering. And while I haven’t been playing in any formal group, I’ve spent a lot of that time fighting alongside comrades, thanks to Legion’s clever faction tagging, which allows you to work together to fight mobs and bosses with all players getting fair credit for their efforts.

Sure, you’ll meet the occasional jerk, but a lot of the time players are polite, friendly and happy to give or take a little help. And when you do need more assistance, with most questlines ending in a dungeon somewhere, the Group Finder tool makes it easy to find a band of heroes, and most of the time your fellow players seem happy to provide guidance and assistance as long as you meet them halfway and play your assigned tank/healer/damage-dealer role. 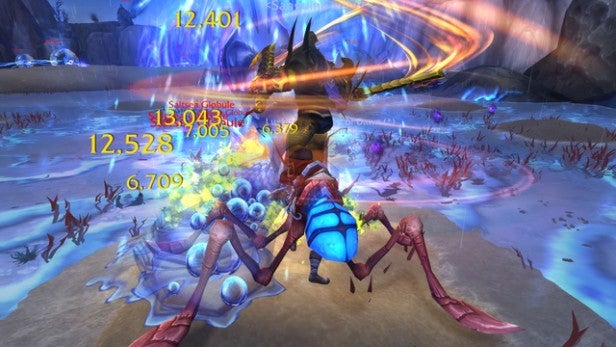 Legion’s new additions are all very welcome. The new legendary artefacts system has one downside – practically every character in your class and specialisation will be wielding the exact same weapon. But your ability to upgrade and customise it through use adds another way to progress your character to WoW. It also adds some interesting new choices – as the artefacts are tied into a specialisation, you need to decide whether to concentrate on, say, your Demon Hunter Havoc (damage-dealer) upgrade path or keep your options open by working in the Vengeance (tank) specialisation too. I began Legion doing the former but have gravitated to the latter, just because it made me more useful when playing dungeons in a group.

On one level, the new class-specific Order Halls are really just a replacement for Warlords of Draenor’s Garrisons, giving you a hub for facilities and a sort of strategy/resource-management mini-game where you can recruit followers and send them out on missions. Blizzard makes it worth doing so by rewarding you with upgrades for the Hall and more powerful followers, in turn giving you access to better stuff. However, the Order Halls have a really enjoyable, busy atmosphere about them, while the missions are perfect for running in the background while you’re busy chasing the more interesting questlines. Legion makes this stuff a pleasure, not a chore. 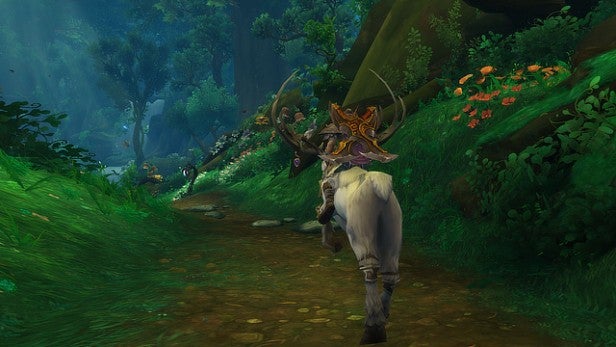 Finally, the Demon Hunters make a brilliant addition to WoW’s class line-up. These demon-infused Night-Elf/Blood-Elf bruisers have a fantastic, fast-paced, aggressive style of play, with the Havoc specialisation giving you some great, very mobile high-damage attacks and the Vengeance specialisation giving you a tank that gives as good as he or she gets. Throw in one of the best starter zones in the game and some hugely entertaining class-specific questlines and it’s tempting to play through Legion with one of the new guys even if you already have a high-level character – the fact that they start at Level 99 helps.

For me, though, the real value of Legion lies in the content. While not all the parts of the new continent, The Broken Isles, are beautiful, some are absolutely fantastic. Blizzard’s brilliant art team has pulled miracles from rather basic scenery and textures and a dated engine. It turns out that you don’t need photorealism to produce areas and characters that resonate, just an eye for great scenery, a sense of character and a coherent art style. The worst areas in The Broken Isles look as old and generic as fantasy worlds come, but the majority are rich, colourful and atmospheric, making them feel more like real locations the more you explore. 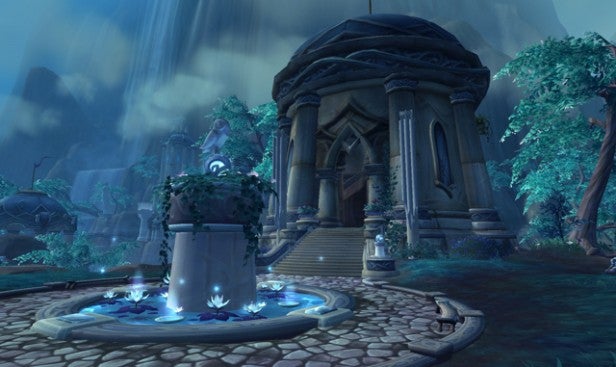 The questlines also score well for both variety and entertainment value. Again, the limitations of WoW’s core gameplay ensure that you’ll spend a lot of time slaying 12 assorted demon invaders, rescuing eight terrified citizens and collecting six glowing magic crystals, but Legion does an impressive job of disguising this through a combination of epic lore, good storytelling, humorous details and clever pacing. I love the way questlines build up towards big confrontations, with the heroes and the villains dishing out speeches in small pop-up frames with pantomime gusto. True, you’re dimly aware that you’re not the one true hero and that you’re only doing what a million others are doing at roughly the same time, but you get sucked into these little micro-sagas, not least because so many include recurring fan-favourite baddies.

Basically, whether you’re smacking up faery munchkins in a lush woodland glade or following a doomed Night Elf prince through the ruins of his kingdom, Legion is a blast. It’s a game that can hurl you from a sky-navy battle (complete with turret sequence) to an undersea excursion to the interior of a sci-fantasy starship within a few hours, yet make each seem part of a glorious whole. What’s more, Legion is so ludicrously, worryingly addictive that a quick hour nearly always turns into three or four, followed by a stupidly late bedtime, sleep deprivation and a day with half your brain wondering which questline you’ll pursue when you log on again. This may or may not be a good thing, but it proves WoW’s legendary ‘stickiness’ is back in force. 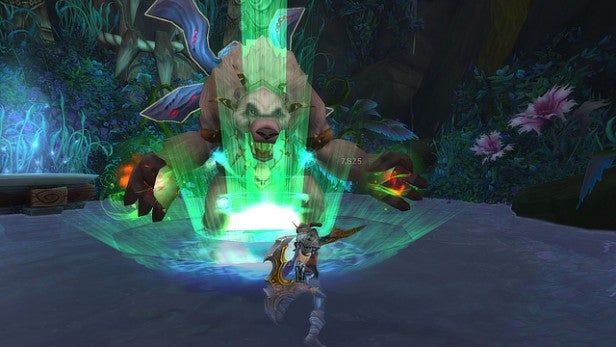 And while the dungeons can seem a little too hack-and-slash heavy, with vast ‘trash mobs’ of enemies that can make finding your group after dying a nightmare, the actual boss battles contained within often incorporate clever tricks and party tactics. Those of us who first loved WoW for the questing will find Legion right up our street, and I suspect the endgame material, with more dungeons and raids coming online, will have the more hardcore fanbase covered just as well.

Legion isn’t WoW reinvented. The keyboard-tapping combat mechanics seem as old as the hills and the minute-by-minute gameplay has barely changed in more than a decade. The graphics are even less cutting-edge than they were at launch, while I suspect absolute newcomers will find the story and many of the customs and conventions baffling. Even as a returning player, I’ve still felt like a half-witted noob.

Yet Legion does feel like WoW re-invigorated, with new areas and questlines that seem to celebrate the best of the game. What’s more, much of the friction that used to stop you enjoying WoW your own way has disappeared, thanks to a flexible approach and years of polishing the UI and basic systems.

Put it all together and you have an experience that feels both a little old-fashioned and utterly compelling. If you ever had a hankering to try or return to Blizzard’s monster MMO, this is the time.