Blizzard set itself a tough challenge with World of Warcraft, but it has managed to surpass expectations on many levels. Of course you’re faced with the same problems that are inherent with any online game, but on the whole WoW creates a new world for you to live in whenever you’re tired of the real one.

From the start, it was promised that World of Warcraft (WoW) would be the Massive Multiplayer Online Role Playing game that the rest of us could enjoy. No more tedious hours of rat-whacking, followed by days of constant effort skinning bears and collecting herbs just to get enough gold to buy a half-decent battleaxe.

Well, many of us already spend fruitless hours performing tedious or mind-numbing tasks for financial reward. We call it ‘work’ and we don’t play games to do more of it. What we do play games for is to set our imaginations free and have some fun, and if playing WoW tells you anything, it’s that Blizzard hasn’t forgotten that.

You see, Blizzard likes to think differently, as becomes clear from the moment you start creating characters. The world is roughly divided between two warring factions – the Alliance and the Horde – both of which should be familiar to Warcraft 3 old hands. In another game, the Alliance, comprising humans, dwarves, gnomes and knight-elves, would be the goodies, and the Horde, including Orcs, Trolls, the undead Forsaken, and the bestial Tauren, would be the baddies, but in Blizzard’s world, things are not so clear cut. Each race has its own background and rationale – even the rotten corpses of the Forsaken want to be loved (or at least be allowed to survive!)

It’s all about choice. Each race can choose from a number of different classes, and which race and class you select has a real impact on the way you play. Some, like the warlocks and hunters, get obvious perks – demonic minions for the warlock, faithful pets for the hunter – but all have abilities and powers that make them useful in a fight or on a quest. Warriors might suffer from a little demon-envy when they see a warlock’s familiar at work, but it soon evaporates in the heat of battle when your muscle-bound hero unleashes a storm of potent attacks. However you like to play, whether you’re a bloodthirsty brawler or a fireball-tossing mage, you’re going to find what you’re looking for. 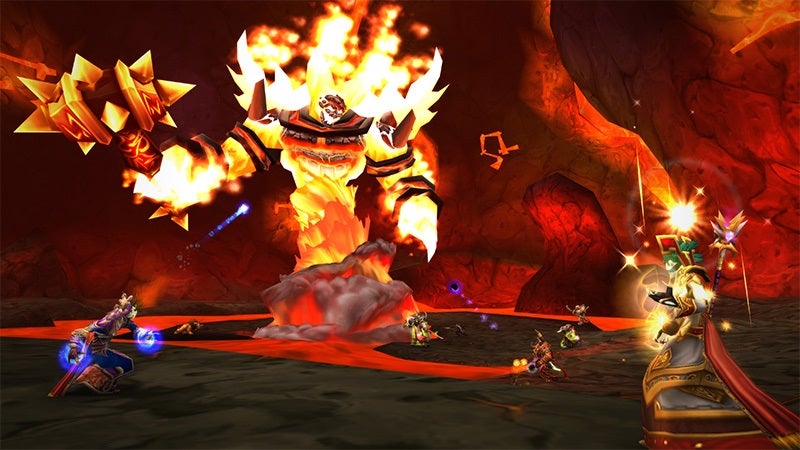 Structurally, the game is perfectly paced. Whomever or whatever you choose, you start off in a small base of some kind, where you’re gently introduced to combat, quests, and the rest. Your first missions are of the ‘collect ten of this, bash five of that’ school, but they don’t last long and there is some attempt to make your efforts seem worthwhile. Then, just when you start thinking that it’s time to spread your wings, the quests start pushing you further afield. Two hours in and you’re based in a small town, tackling local problems and engaging in a few cool side-quests. Five hours in and you’re delivering a message to a contact in the big city, or starting off on a longer adventure. Eight hours in, you could be almost anywhere.

And WoW lets you grow gently, without punishing every mistake in brutal fashion. Health recharges fairly rapidly, but death needn’t be the end. Your unquiet spirit soon appears in a nearby graveyard and you can set off to recapture your body. That’s still bad luck if it’s lying in the local Gnoll HQ, but there’s always an option to start again at a small cost to arms and armour. In WoW, The days of dying and losing everything are thankfully over.

WoW is also well balanced in terms of solo play and group play. Some missions demand that you find some like-minded friends if you want to survive, but many allow you to handle matters alone provided you avoid the Kamikaze approach. And while there are groups that play regularly together, you don’t need to commit yourself if you don’t want to. There are usually ad-hoc gangs assembling to tackle tougher missions, and it’s perfectly fine to team up for a quest then splinter off once it’s done. 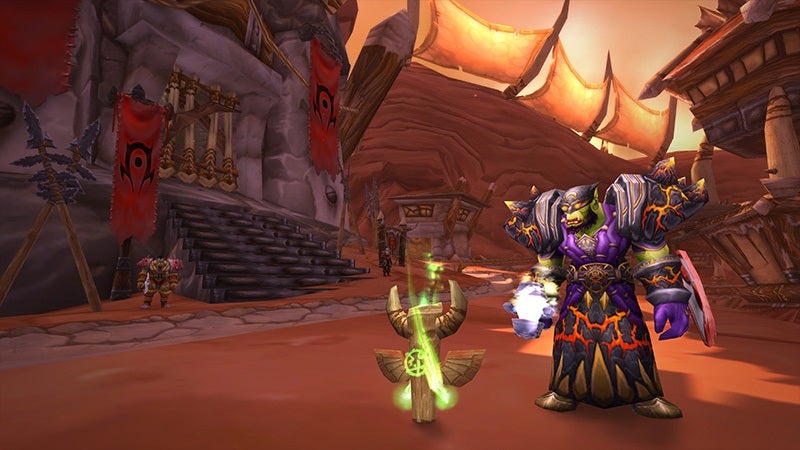 Admittedly, the quests themselves never seem to stray too far from combat or collecting, but Blizzard has packaged them in a way that makes you feel part of an unfolding story. As a human mage, I found myself caught up in a bizarre tale of inter-family squabbles and tender romance, mostly played out in the confines of a pumpkin patch. My undead warrior, meanwhile, got busy sowing the seeds of plague, recruiting reluctant lich-lords to the cause, and bringing an end to a cursed undead family. And that was just to start.

But there’s more to WoW than just quests. One of its pleasures is that it gives you the option to battle players from the other faction on specific PvP servers. While everyone else is busy tackling quests, there’s nearly always some glory-hunting dwarf demanding a raid on the Orc village to the south, or some undead wretch looking to spread some death around. Certain zones are safe, and the presence of high-level computer controlled characters in key havens should keep the newbie safe from harm, but if you want to put the war back in Warcraft, there’s no reason why you can’t get stuck in.

Yet Blizzard’s greatest achievement is the world itself. You could argue it’s nothing special. The models are fairly low in detail, and there’s nothing to match Doom 3, Half-Life 2 or even EverQuest II on a technical level. And yet Blizzard has managed to make a world that’s heavily stylised and genuinely beautiful, full of soft glowing skies, rolling hills, magnificent forests, and gloomy deserted towers. It’s hard to arrive within the city of Stormwind without feeling some sense of awe, and equally hard to explain how perfectly twisted the undead subculture is, with its eerie Undercity hidden beneath another city’s ruins, and its dark graveyard towns dotted through the shadowy woodlands. WoW shows comprehensively that artistic vision can count more than pixel shaders and polygons when they are used without imagination. 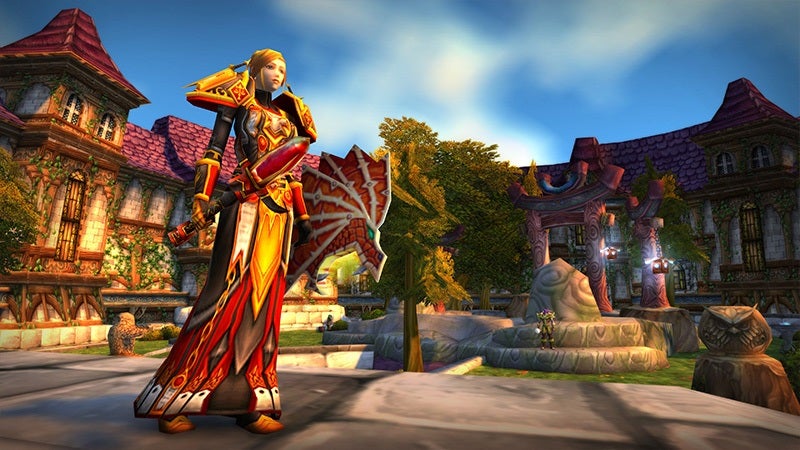 As with any MMORPG, experiences will differ. Blizzard is doing its best in the face of incredible demand to make sure there’s space for everyone on its servers, but some are getting congested, and there are instances where players are queuing to fight a monster and finish a quest. It’s also quite possible to find socially deficient halfwits who moan about stealing experience points or seem determined to grab all the goodies, but then that’s also an unfortunate part of real life.

All I can say is that there is a genuinely brilliant experience in here, one that welcomes you in and sucks hours from your life without you even noticing. You could play for days on end, and still feel you haven’t sampled more than a tiny portion of what’s on offer. You could be spending every second fighting, or take time to learn the skills of tailoring or engineering. You could go deep into city society, or battle enemy players and redraw the territorial map, or just tread the wild roads on your lonesome. Whatever you choose, you’re certain to have a great time.

Blizzard set itself a tough challenge with World of Warcraft, but it has managed to surpass expectations on many levels. Of course you’re faced with the same problems that are inherent with any online game, but on the whole WoW creates a new world for you to live in whenever you’re tired of the real one.

Next
World of Warcraft Review