Available on PS4 (version tested), PS Vita
I really wanted to love World of Final Fantasy. With the upcoming Final Fantasy 15 abandoning the series’ staple turn-based battling in favour of fast paced, real time action, this looked like a welcome return to the series’ roots. Boasting cameos from the franchise’s most beloved characters and combining traditional turn based combat with a new monster collecting twist, initially it felt like the grin inducing Ni No Kuni meets Final Fantasy I never knew I wanted. Sadly though,it wasn’t long before repetitive gameplay loops, poor storytelling and annoying design choices spoiled what could have been a perfectly enjoyable adventure.

As is spin-off law, World of Final Fantasy takes place outside of any known setting from the franchise. Placed in the shoes of twins Reynne and Laynn, you awake to find your home town eerily empty, aside from a lone mysterious girl. She soon reveals that the twins are in fact Mirage Keepers, the stuff of legend. With Reynne and Laynn having no memory of their great deeds, they are told the secrets of their illustrious past lie in the mysterious world of Grymoire. 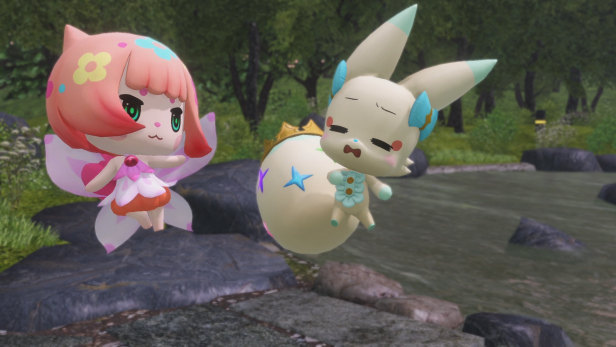 Upon arriving in Grymoire you discover two things: firstly that all the world’s inhabitants look like pint sized plushies and secondly that you have the rare ability to command monsters, known here as mirages. Like Pokemon and Ni No Kuni, World of Final Fantasy sees you collecting and battling monsters – but with a twist. As Mirage Keepers, our protagonists have the ability to not only ‘imprism’  Gyrmoire’s monsters (mirages) but also to swap between the regular human sized ‘Jiant’ form or the kawaii cuteness of their Lillekin form. While this could have been just a nice little visual quirk, this seemingly pointless mechanic is actually crucial to the game’s main battle innovation – stacking.

Stacking monsters is pretty much exactly what it sounds like. In World of Final Fantasy you charge into battle with different sized monsters stacked on top of our protagonists’ heads. Of course as any keen Jenga player will know, you can’t just stack willy nilly. Mirages you imprism can either be small, medium or large, meaning that as long as you balance their weight you can grab two of your favourite mirages and stack them on top of your Jiant sized head. As a Jiant you function as the large monster at the bottom of the stack, popping a medium monster buddy on your bonce and then chucking an even smaller critter on top of the medium mirage.

When in Lillekin form you can place a large monster on the bottom, a medium mirage on top of him and then finally your character can stand proudly as the top layer in this weird, unwieldy sandwich. This means that you can have one setup for your teeny Lillekin stack and another for your Jiant, allowing you to switch between two different battle ready teams before each fight. 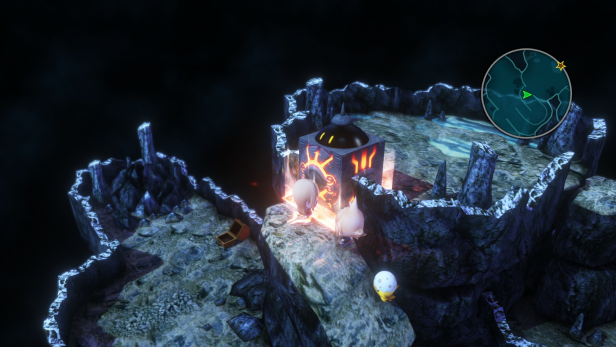 As well as giving you an opportunity to use different sized monsters, stacking similar monsters also allows you to unlock stronger abilities to use in battle. Stacking two fire monsters on top of your noggin with basic abilities like foxfire and fire for example will unlock the more meaty fira spell. This means that you’re encouraged to constantly experiment with different combinations of mirages, leveling them up to unlock different abilities on their sphere-like grids and combining them with complimentary creatures to create a strong team. Levelling up also allows you to ‘Transfigure’ various creatures, essentially evolving them into bigger and more deadly creatures.

If this sounds like quite a lot to take in, that’s because it is. For the game’s first six or seven hours, it throws an overwhelming amount of information your way. With this supposedly  meant to be a fun way to introduce children to the series, I can’t help but feel that these systems would baffle many younger gamers. Yet unfortunately for us oldies, this complexity never really translates into much of a challenge, either. While the unique stacking mechanics and cool monster designs make combat feel refreshing and fun to begin with, the game rarely offers difficult enough foes to bother swapping out stack configurations. Sure, you can go back and fight more powerful mirages that are hidden in each world, but that doesn’t excuse the fact that the 30 plus hours of the main story feel bereft of challenge. To give you some idea, I only saw the game over screen twice during my playthrough.

Still, while the combat is only really fun in small doses, many play Final Fantasy games for their engaging stories and fantastical worlds – and the game’s narrative starts off well enough. Combining some promising monster battling with the threat of the world being overrun by an evil human empire it all still feels like Final Fantasy. Yet sadly it quickly loses focus. While this tale ticks almost every cliché in the big book of JRPG plot devices, thankfully some great localisation helps ease the ride. With meta, fourth wall breaking jokes and some punbelivably good wordplay, this is without a doubt the funniest Final Fantasy to date.

Yet while the constant barrage of Joss Whedon-esque clowning charms at first, the constant self aware chatter soon becomes incredibly grating. The further you progress, the more the writers seem to struggle to create engaging reasons for travelling to the places you visit and seem to give up justifying the repetitive gameplay loop that constantly presents itself. Mercifully, Square Enix have seen fit to give you the ability to fast forward through text and if you’re really struggling, you can even skip cutscenes entirely. 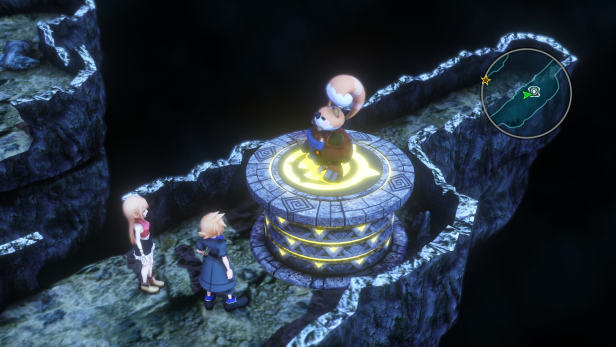 Frustratingly, the rest of the game isn’t so thoughtful. Unlike Pokemon, there are no repels available to provide respite from the constant onslaught of random battles. While in true FF fashion you still have the option to escape encounters, this only seems to be effective 40 percent of the time. With each dungeon requiring you to find an item and then backtrack, you often find yourself fighting the same monsters on the same paths over and over again. Bafflingly, you can’t use healing items outside of battles either, meaning that even if you have a healthy supply of phoenix downs or a stack of healing mirages, you’ll still have to wait until the next battle to revitalise the party. Even worse, some dungeons require you to have a mirage on hand with a certain ability in order to solve puzzles, but you’re not told this beforehand. On several occasions I had to leave the dungeon and go back to farming old areas hoping that a certain mirage would spawn.

Yet despite it’s problems World of Final Fantasy isn’t a bad game, just a frustrating one. There are some interesting ideas here and it’s undeniably charming but with just a few tweaks to the gameplay, a more imaginative story and greater variety to the dungeons, this could have been something truly great. While I’m sure die hard fans will find a lot to like, this is definitely a game that I think many will struggle to complete. If you’re desperate for a traditional RPG with cameos from some familiar faces, this will fit the bill. For everyone else, you’re better off picking up Dragon Quest Builders or waiting a bit longer for Final Fantasy 15.