The Woodfield TE0658 is among the cheapest leaf blowers you can buy, normally costing just £49.99 and currently reduced to a mere £27.99.

Despite the ludicrously low price you get a two-speed motor, charger and a 1,300mAh, 18V Li-ion battery that’s good for 30 minutes of use. At this price there are bound to be a few issues, but it may still suit those buyers on a budget.

There’s little wrong with the overall design of the TE0658. Layout-wise it’s essentially identical to the Bosch ALB LI, which I found a joy to use.

The plastics and finish are clearly a touch lower-quality, but it remains a robust enough device that’s easy to handle. Probably the most concerning element is the battery, which doesn’t slide in and out of its slot as well as we’d like. This is a bit of a pain, since you have to remove it to charge it. 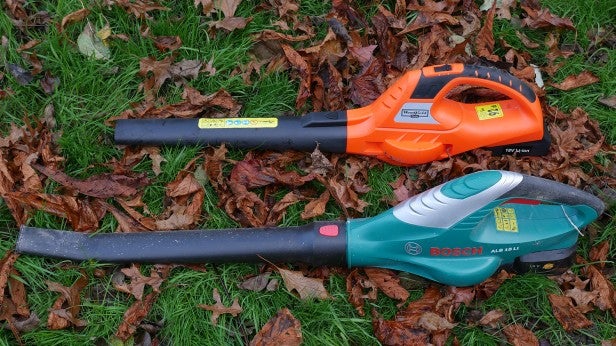 This picture shows the blower with only half its nozzle attached

The nozzle comes in two parts and is fully removable for easy storage. It isn’t too difficult to attach and remove either, unlike the two-part nozzle of the Stihl SHE 71.

The tip of the nozzle is bent upwards slightly to provide a better angle of attack, and it’s just the right length. It’s just long enough for my 6ft in frame to still reach the ground, yet it shouldn’t be too long for shorter users either.

The controls consist of a single sliding switch that moves from the off position to two levels of power. The first produces “80mph” wind, while the full-power mode runs at “120mph”.

The most noticeable thing about the TE0658 is the unpleasant noise it makes in slow mode. The blower motor fires off a high-pitched squeal, alongside its otherwise fairly quiet wind noise that measured in at 68dB. I’d consider using ear defenders.

The other issue affecting the low-speed mode is that it’s pretty pathetic. Woodfield does make a point of saying that this tool isn’t suitable for clearing heavy, wet debris – and sure enough, the TE0658 utterly failed to make any sort of dent in the pile of damp leaves I was trying to shift from my lawn.

It really is only of use on hard ground, where it will happily shift dry leaves and dust about 2-3ft from the nozzle. 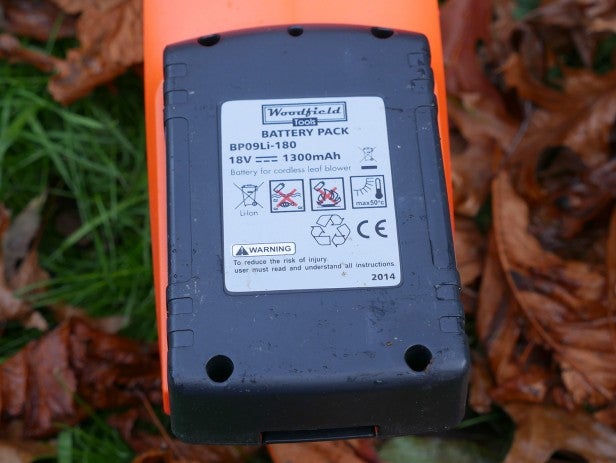 Turning the blower to full-speed mode resulted in the TE0658 making more of an impact on our test leaves, but it still wasn’t enough to be at all useful. It could just about manage to push the leaves about a foot from the end of the nozzle.

This compares to around 4.5ft with the Bosch ALB LI; it did require multiple passes to achieve that range, but it managed it nevertheless.

So, again, even at full speed, the Woodfield TE0658 is only really good for hard surfaces and dry leaves and dust. You could just about get away with using one if you have a small tree with small leaves that fall on grass – but otherwise it simply doesn’t have the power.

At full power it produces 73dB of noise, which compares to 70dB for the Bosch ALB LI. This was measured from head height, with the blower held in its usual in-use position.

On a positive note, the 1,300mAh battery is reasonably quick to charge. It takes four hours to top up, gaining you 30 minutes of use. In comparison, the Bosch takes three and a half hours to charge for only 10 minutes of use, but bear in mind that it’s a larger 1,500mAh unit and the blower is much more powerful. 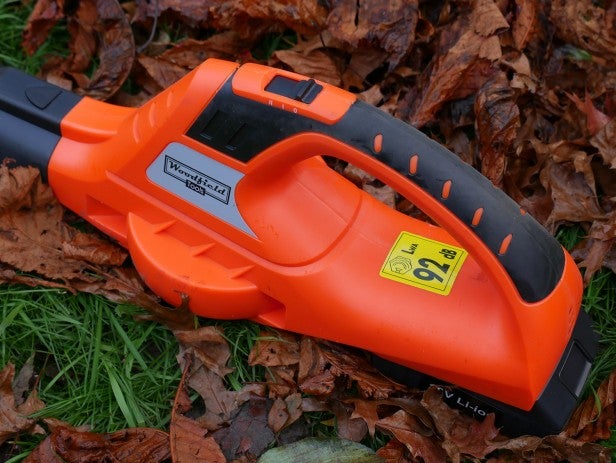 Should I buy the Woodfield TE0658 Cordless Leaf Blower?

If the prerequisite for a leaf blower is that it can move a decent volume of leaves from a garden lawn then the TE0658 is a distinct failure. Add in that its low-power mode is irritatingly noisy, and you have a blower that’s off to a shaky start.

However, for those with a largely hard-landscaped garden with a few small trees, the TE0658 will just about suffice for clearing paths of general dry debris. It’s easy to use, packs down small and should prove fairly robust.

If you’re looking for more power then the Bosch ALB LI just about has the oomph to clear larger piles of leaves from lawns as well as other damp debris from around the garden. But it costs twice as much as the Woodfield TE0658 and has only a 10-minute battery life (although this should be plenty for clearing a small garden).

Meanwhile, those looking for real power and versatility should look to the Stihl BGA 85, which is as powerful as a mains-powered model, has a fine variable speed control and lasts for 30mins following a charge. It does cost a princely £475 including a battery, though.

The Woodfield TE0658 isn’t suited to large gardens or use on lawns with damp leaves. However, for hard surfaces and in the dry, it gets the job done – and at a bargain-basement £27.99, it’s definitely worth consideration.