Garden vacs and leaf blowers are normally the type of tool considered a bit of a luxury. However, the Woodfield TE0657 combi blower and vac usually retails at £49.99 – and is currently on sale for only £27.99.

For that you get a mains-powered blower and garden vac/shredder with a variable speed motor and adjustable length nozzle with wheels. That’s not luxury, that’s a potential bargain!

The TE0657 is clearly a machine built to cost, with its plastic casing, fit and finish feeling that they’re a rung below the higher-quality brands. However, where it matters this machine feels solid enough.

The nozzle is made from a tough flexible plastic, while the motor housing, handle, power switch and adjustable secondary handle all feel reasonably sturdy. It’s only really the vacuum bag that lets the side down, thanks to it being so lightweight and crumpled straight out the box.

This is a lever-switched blower/vac that uses a single-piece nozzle that combines both the blower and vacuuming tubes, as opposed to the sort that requires you to swap the hoses from inlet to outlet such as on the Bosch ALS 2500 and Stihl SHE 71. 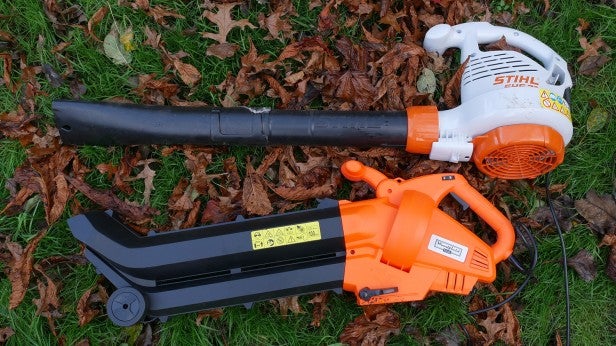 This makes it far more convenient to use and store. However, for this model it also means that both nozzles – the vacuum one in particular – are smaller than on the Bosch and Stihl units.

The TE0657 also has wheels on the end of the nozzle, which could be useful for those who find its 5kg weight a bit much to bear. I tended to sway it from left to right when in use so the wheels were redundant.

The nozzle is easy to adjust and stretches the total length of the machine, from a conveniently compact 80cm or so to around 110cm. It can also be removed completely for storage or cleaning out the fan intake.

Note that as a result of the design, the fan/shredder blades aren’t accessible as they are on units where you swap the hoses. This means that if the vac does become blocked, it could be more difficult to clear out.

The control system consists of a rotary dial to adjust the speed and a trigger switch, both of which are conveniently positioned and easy to use. There’s also a secondary handle that sits in front of the controls, which makes holding the TE0657 effortless.

One of the most obvious cost-saving measures with this machine is its cable, which is only 5m long. Some machines have cables that run up to 10m. Still, in some ways it’s actually preferable to have a shorter, easier-to-store cable on the device and add an extension when in use. 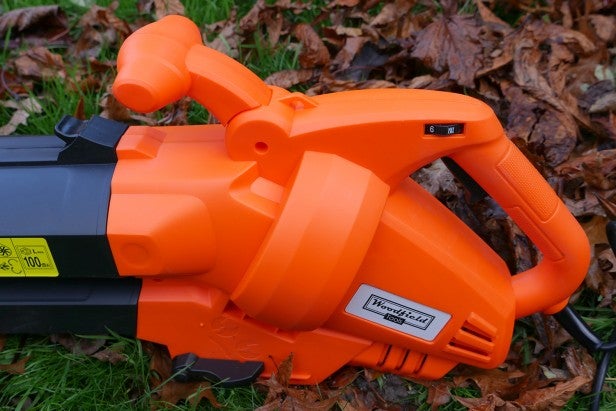 As a blower, the TE0657 is only passable. In our wet leaf test on a lawn, it could blow an arc of only about 4ft, which is nearly half what some mains-powered units are capable of. Still, it’s plenty for less demanding jobs in the dry or on hard surfaces.

Given this lack of overall power, the speed variation is of limited benefit, especially since the size and shape of the device means it isn’t the sort of machine that can double for smaller indoor or garage jobs. Still, it will allow you to take care of some easier tasks.

Noise was measured at 73dB on low speed and 85dB at full pelt, which is quite noisy for such a low-power machine. In comparison, the Stihl SHE 71 measured just 83dB while blowing with a range of 7.5ft.

The key advantage of these sorts of combi devices is that to switch between modes you simply attach the vacuum bag and move the lever that sits next to it – it’s a 10-second operation.

I was also surprisingly impressed by the vacuuming performance, considering the modest blower power. The narrow tube opening does have a tendency to become blocked, but a quick shake or tap is all it takes for the leaves to be sucked up into the bag.

Despite pushing it hard with a large volume of big, damp leaves, the TE0657 mulched and gulped up the 3kg of leaves with ease – it was just a little slower than the larger, more powerful units.

The resulting waste is nicely shredded too, and emptying the bag is simple and doesn’t create too much mess. It’s quite small though, so it took two attempts to clear all the leaves. The more powerful machines would manage such a cleanup in one go. Should I buy the Woodfield TE0657 Leaf Blower and Garden Vac?

Just like its sibling – the Woodfield TE0658 cordless leaf blower – the TE0657 is a machine built to a really tight budget, and it shows in some areas. It isn’t as powerful as rivals, but it’s noisier and clearly isn’t built to the same quality standards.

However, it gets the job done. If you have a small garden, the TE0657 could quite easily suffice – although I’d be wary of picking it up if you have a nearby tree with large leaves; they’re likely just block the vacuum intake. What really makes this ideal for smaller areas is that it packs away fairly small too.

For those with larger gardens, with more than a couple of sizeable trees, the TE0657 simply doesn’t have the power or capacity to handle what will be required.

It isn’t without its flaws, but the Woodfield TE0657 is up to the task of clearing small gardens of leaves. For the price – and size – it’s worth considering.