Available on Xbox One, PS4, PC (version reviewed)
Here’s a turn up for the books: in a world where too many sequels feel like glorified expansion packs, we have a stand-alone expansion that could pass as a sequel. Well, The Old Blood is – strictly speaking – a prequel to last year’s Wolfenstein: The New Order, but that doesn’t mean it’s not a great Wolfenstein in its own right. In fact, for all that some things have been lost or just abandoned, it’s arguably the tighter, more entertaining episode.

In many respects, it’s yet another reworking of the original Wolfenstein; another dive into the same territory as 2001’s Return to Castle Wolfenstein and Raven’s 2009 reboot. Set in 1948, it follows B.J. Blaskowicz’s mission into the titular castle on a mission to find the location of The New Order’s antagonist, General Wilhelm ‘Deathshead’ Strasse.

Needless to say, things don’t go to plan, as Blaskowicz comes up against resistance from a sadistic Nazi keen on feeding human meat to his dogs, then into conflict with Nazi archaeologist Helga Von Schabbs. Von Schabbs is up to that old Wolfenstein favourite, occult research, and it’s her activities that define the second act of the game and return The Old Blood to the supernatural high-jinx of Wolfensteins past. Anyone old enough to remember Episode 2 of the original Wolfenstein 3D? Well, the second half of The Old Blood is a 2015 remake. 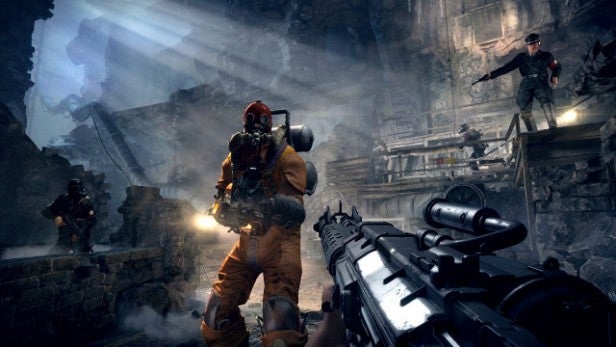 In terms of mechanics, it’s not vastly different from The New Order. This is still a rather old-school, action-heavy FPS with tons of Nazis to kill and a fine selection of weapons with which to kill them. There’s still a surprising emphasis on stealth, where sneaking around and killing enemy commanders before they can call in reinforcements will give you an easier ride. There are some fantastic 1948-era weapons to play with, including high-powered, fast-reload shotguns, a carbine and a flare gun, and a particularly useful multi-purpose tool: the pipe. Split in two and dual-wielded, it’s great for stealth-kills on inobservant Nazis, but can also be used to pry things open, smash through crumbling stonework or clamber up specific walls.

That’s about as close to new gameplay as The Old Blood gets, and it even jettisons some aspects of The New Order, replacing the old upgrades system with a more lightweight series of unlockable perks. What is new, however, is the tone.

Now some people loved the storyline of The New Order, and found B.J’s interactions with the resistance cinematic and emotionally engaging. Others, however, found the shifts in tone awkward; one minute you’re cackling away at B.J’s brainless, mildly-sadistic Nazi bashing, the next you’re supposed to be empathizing with his war-ravaged comrades. It was as if MachineGames couldn’t work out whether they were trying to make Inglourious Bastards, a B-Movie sci-fi flick or a sensitive wartime drama, and so tried to make all three at once. 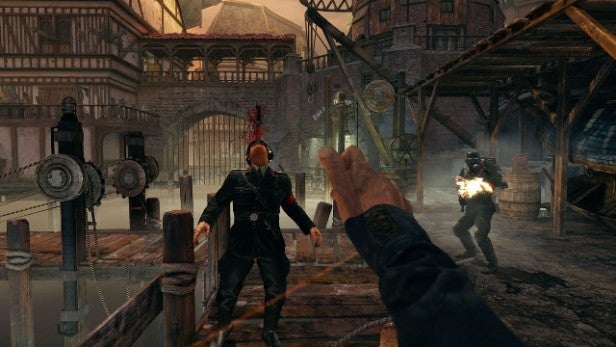 There’s no such conflict in The Old Blood. It’s a big B-Movie action flick with a smattering of horror and a whole lot of gore. It’s faster-paced and more tightly-structured than The New Order, and while there are attempts to shove in sympathetic characters, it’s mostly the tale of one brute’s love affair with ultra-violence. It’s even happy to take more time to joke, with knowing reference to past Wolfensteins and a hero who wilfully mishears instructions to ‘play things quietly’ as ‘kill everything that moves.’

And – perhaps because of this – the combat just flows better this time around. There’s just enough stealth and strategy to keep things interesting, but if you want a game where a man called B.J. blasts Nazis by the boatload with a range of assault rifles, shotguns and heavy machine-guns, then this is it.

I doubt The Old Blood will get the credit it deserves, but the level design throughout is brilliant. Not only are there areas where you’re given free rein to try different strategies, but the way the action flows forces you to keep moving. Getting stuck in one position will see you starved of ammo, low on health and armour and under overwhelming fire. Playing on the classic Hurt me Plenty difficult level, you feel pushed to think on your feet, adapt, strategize and survive. Even the simplest firefights are rewarding. 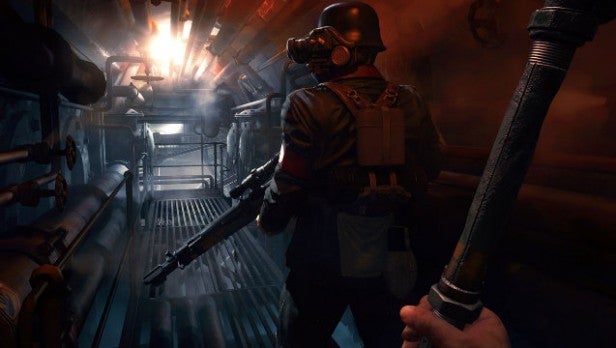 Sure, The Old Blood has The New Order’s worrying tendency to just hurl waves of enemies at you for minutes at a time, with too few checkpoints to avoid frustration, but when it does so the areas are richer in tactical opportunities, while ammo, armour and health packs are thrown liberally around.

What’s more, the set-pieces are fantastic. Climactic skirmishes and boss battles are actually exciting. A fight through a city bath-house is tough, interesting and memorable. And while many of the sequences are hoary old clichés – a cable-car battle, a fight through Nazi infested caves, three way battles between Nazis, zombies and you – MachineGames has found ways to make them tense and enjoyable. It might be the gaming equivalent of a classic rock radio station but, man, do those old hits sound good. 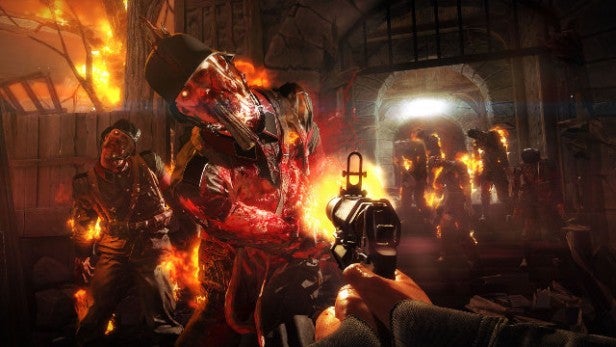 The Old Blood could also be id Tech 5’s finest hour. While the limited facial animation systems make some of the close-up scenes look a little dated, the gothic, heavily-stylised scenery, superb atmospheric effects and creative lighting leave The Old Blood looking damn close to concept art. At times, all this good stuff has a devastating effect on frame rates – our quad-core Xeon/Radeon 285 setup struggled with some of the later scenes of hellfire and damnation – but we did have everything dialled right up, and we understand that the PS4 and Xbox One versons have been optimised to avoid this.

Best of all, the normal downside of a DLC expansion – a short running time – really doesn’t apply here. For a bargain-tastic £14.99 you get a good seven to nine hours of gameplay, depending on your difficulty level and how often you cough it in a skirmish. And while its fairly linear, there are enough secrets and extras to make a return visit at a higher difficulty level worthwhile.

Verdict
The Old Blood doesn’t bring much new to Wolfenstein in terms of gameplay, but it’s a brilliant old-school shooter with a reasonably lengthy, fast-paced campaign at a budget price. If you played and loved The New Order than it’s damn near essential, but even if you didn’t it’s well worth a blast. Killing Nazis and slaying zombies doesn’t get much more entertaining.