Wolfenstein and I go back a long way. The original was possibly the first PC game I ever played, sitting at the keyboard of my housemate’s 386 not long after the game first launched. Over a two year period I played through the original on every difficultly level, followed by iD’s sequel, Spear of Destiny. Just less than ten years later I was captivated by Raven’s first re-imagining, Return to Castle Wolfenstein – a game which suffered from comparisons with its contemporary, Medal of Honor: Allied Assault, but which I found hugely entertaining. I say this because I don’t want you to think that I came into the new Wolfenstein wanting to put it down or to complain about iD and Activision milking the franchise. I came into it rooting for the game, wanting it to be good. I don’t care if Wolfenstein is backwards looking, dated or lacking in innovation. As long as it looks, plays and feels like a modern day Wolfenstein should, then I’ll be happy.


Instead, I’m a little bit confused. 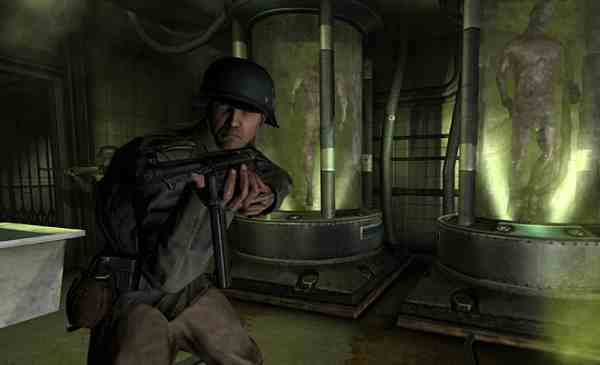 Things could be worse. One hour in, I was merely disappointed. Bar one brilliant section, the first level was a hackneyed approximation of a Call of Duty, making even Treyarch’s worst efforts on CoD3 seem inspired by comparison. After that, the game seemed to have taken a weird left-turn into STALKER-ville, opting for the kind of free-roaming, talk to contact X, follow contact Y shenanigans you expect from the love-it/hate-it FPS or Fallout 3. Wolfenstein’s hero, BJ Blazkowicz, has come to the charming German town of Eistenstadt to foil yet another Nazi plan with occult props. To do so, he needs to work with two groups: a resistance setup called the Kreisau Circle and a mysterious occult society, The Golden Dawn. Only by travelling around the city, completing missions for one and then the other can you advance the plot and wreck the German plans. Previously just your basic one-man army, the still strong and silent BJ now has to get in with the locals and serve their needs. 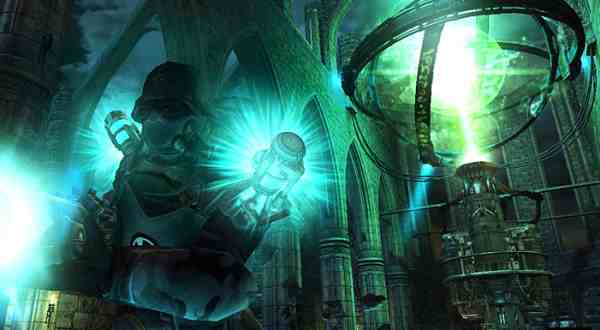 It’s not necessarily my concept of Wolfenstein, but that doesn’t mean it’s a bad one. Linear levels, one after the other, are a little passé in this day and age, and the setting – a city slowly being torn apart by war and dark magic – has plenty of potential for atmosphere. Unfortunately, the area you actually get to travel around is surprisingly small and meagrely populated, and the levels are large enough to act as a boring buffer between bouts of action, without being interesting or well-developed enough to turn them into anything beyond that. 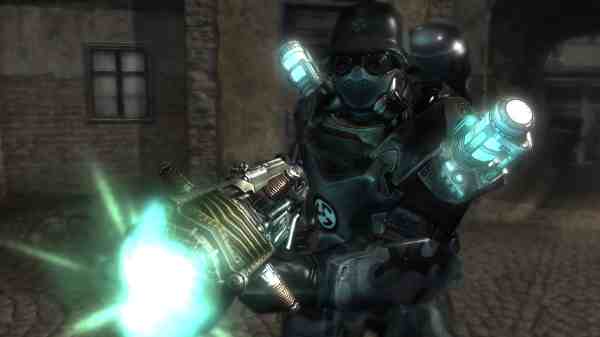 What’s more, the more the game goes on, the more the streets become populated with Nazi troops, technologically enhanced super-troops and all sorts of eldritch horror, meaning that the stretches between missions turn into more extensive running battles. Again, this isn’t necessarily a bad thing, and there is a point at about the halfway mark where you’re enjoying some entertaining, challenging firefights in the public squares and major thoroughfares of mid-town Eisenstadt. After a while, however, the fighting just gets in the way of progress, and there’s a sense that the game is – essentially – being padded out. It hardly helps that you find yourself fighting again and again and again in the same locations, and while you can evade combat by moving across the rooftops or through the sewers, confusing layouts and artificial barriers make doing so even more irritating.

Luckily it’s really not all bad news, and it’s the missions themselves that save the new Wolfenstein from disaster. Sure, some are still hugely uninteresting – you can guarantee that any mission where you have to infiltrate building X and steal document Y will be a tedious Nazi-blasting session straight out of old-school Medal of Honor – but there are still sections where Wolfenstein suddenly remembers exactly what it should be all about, and at these times the game takes off with a bang. 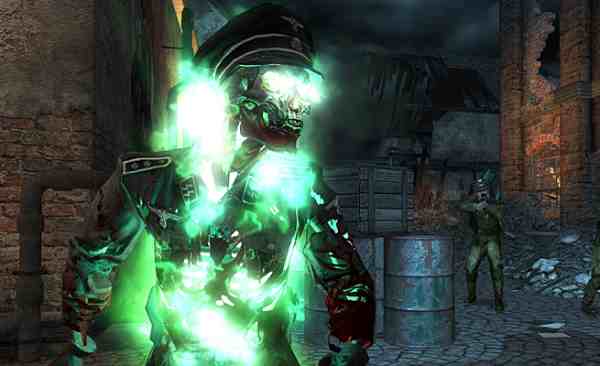 The classic Wolfenstein formula isn’t especially mysterious or complex. Take BJ, add Nazis, throw in weird technology and an element of horror, then shake well and leave until the bullets start to fly. Raven showed with Quake 4 that it could put together well-structured levels and orchestrate big action moments, and Wolfenstein does pack in a few corkers. An early mission in a mysterious ruined temple is just a taster for the treats that follow, including an infiltration of a huge Nazi underground research base, an investigative mission in, around and beneath a most unsavoury hospital, and an all-out assault on a Nazi super-weapons plant.


Skilfully throwing in creepy new foes, dishing out deeply lovable new weapons and putting together fierce, challenging encounters, the best levels in Wolfenstein leave you wondering where the inspiration disappeared to for the rest of the game. These might be riffs on old themes swiped from past Wolfensteins, Gears of War, Resident Evil, F.E.A.R. and Half-Life, but they’re nonetheless entertaining for that, and the chills and thrills come at a pretty steady rate. You can’t downplay the importance of a top-notch score either, and Wolfenstein has one of the best in recent memory. There are times in this game where everything just gels, and the experience is everything I hoped for, if not more. 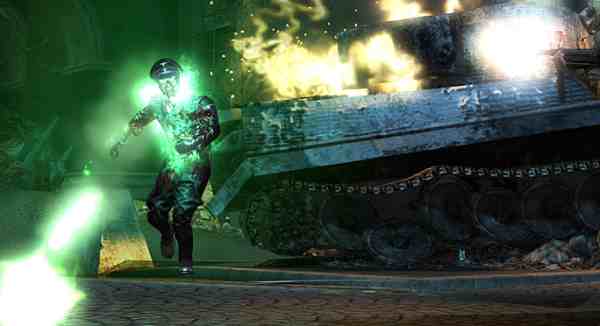 To give it full credit, some of Wolfenstein’s additions to the formula work perfectly well. The biggest is ‘the veil’ an otherworldly dimension BJ can access through an ancient, magic artefact. In its most basic form, accessing the veil enables you to see enemies in the dark and move through secret passages or up mystic ladders, but new crystals soon add new abilities. Again, there’s nothing new about these – hello F.E.A.R.-style slowmo, enhanced damage and a shield – but these new elements work well within the game, and some attempt has been made to integrate them into puzzle elements or make them the keystone of specific combat set-pieces. 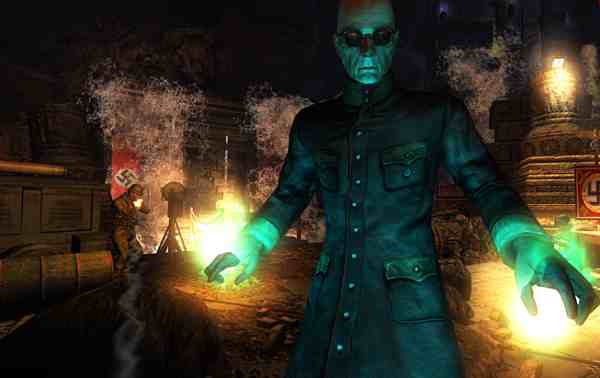 Sensibly, Raven has also lifted another cool idea – this time from the Resident Evil games. Weapons and veil powers can be upgraded at black markets with gold cheekily snatched from Nazi hangouts, giving you the chance to buy telescopic sights, ammo upgrades, damage upgrades and accuracy upgrades for your guns, along with crystals that enhance your veil powers. By being reasonably tight with money Raven has made it hard – if not impossible – for you to maximise all your guns and all your powers, so instead you need to think about how you’re going to fight and the sort of weapons and skills you’ll need to do so. Personally, I turned the default rifle into a top-notch sniper weapon, beefed up the assault rifle and lightning gun equivalent and never looked back, but I’m sure there are other ways you could go that would prove equally effective against your supernaturally boosted Nazi foes.

In many respects, this is the definition of a decent, classically-minded FPS. The weapon set is strong and varied, with a carefully considered arsenal of machine guns, rifles, rocket launchers, flame-throwers and more esoteric heavy weapons. Enemy-wise, it scores well too. Admittedly, Raven gets few points for originality. Its fast-moving, wall-crawling attack zombies were last seen in Uncharted: Drake’s Fortune and F.E.A.R. 2. The heavy troopers might have been pinched from F.E.A.R. or Killzone 2, and the creepy, cloaked ninja-types are straight from Half-Life and F.E.A.R. All the same, each and every beastie fits well into the game’s Himmler meets hellspawn style, and there are just about enough tactical wrinkles in fighting them to keep the core combat interesting. True, your regular Nazi troops could have done with a bit more training – the ‘I’ll pop my head up in the same place every three seconds’ strategy has never been an effective method for survival – but when Wolfenstein is at its best, it’s a thoroughly enjoyable genre effort. 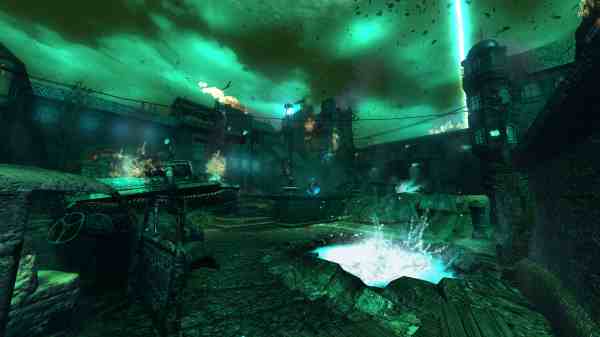 Enjoyable, but not exceptional. The fact is that the likes of Call of Duty: Modern Warfare, Killzone 2, Half-Life 2 and Gears of War have so forcefully redefined the single-player shooter in the last five years that Wolfenstein no longer feels as thrilling as it should. Set pieces we would have called spectacular in 2005 now feel run of the mill, and the quality is not consistently good enough. What’s worse, the same goes double for the graphics. Wolfenstein undoubtedly stands at the pinnacle of what’s possible with iD’s current Tech 4/Doom 3 engine, making skilful use of detailed, high-resolution textures, focus blur, pseudo HDR lighting and a range of other post-processing effects. And yet there are still signs that this is an old engine, whether we’re talking about the blocky looking characters and monsters or the cramped, lifeless exterior spaces. Frankly, when Wolfenstein isn’t at its best, you haven’t just seen and played it all before; you’ve seen and played it looking better. 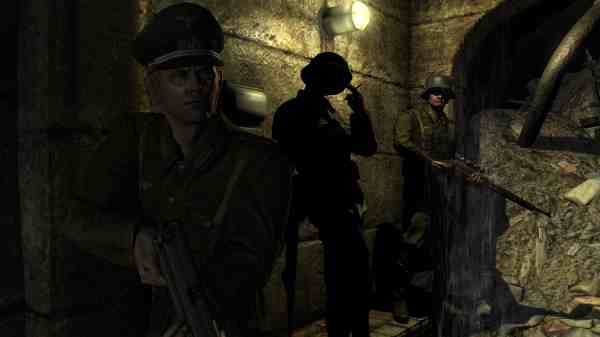 If the single-player campaign is a mixed experience, then the multi-player portion of the game is less so. I can’t say I’ve put many hours in, but my basic impression is that it’s not much good. The graphics are – inexplicably – even more dated and even less detailed than those in the single-player game, while the gameplay has little if anything to offer over what we’ve already seen in Wolfenstein: Enemy Territory and Enemy Territory: Quake Wars. The mechanics of the main ‘objective’ mode worked well there, and they work well here too, but I really can’t see much else that would keep anyone away from CoD4, Killzone 2, Halo 3, Gears of War 2, Battlefield 1943, Battlefield: Bad Company or probably a handful of other games that I might mention. The fact that ET:QW itself both played and looked noticeably superior is really just rubbing salt in the wound. 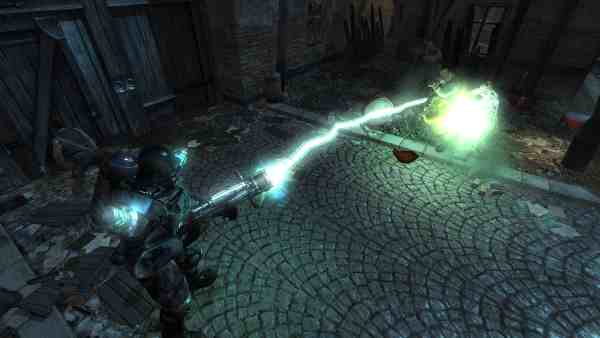 I hope, then, that you can understand my confusion. I like Wolfenstein. There are moments, even lengthy stretches, where it’s everything I want a new Wolfenstein to be: a slice of fast-paced, frantic Nazi blasting with a cool supernatural twist, and even the city-wandering stuff is not a total loss. Yet I come away from it feeling that this is a game that lost its sense of what it is somewhere along the line, and as a result is a bit of a mess. Fans of the series and hardcore fans of the genre will find enough here to remind them of what made the series so great in the first place, but this isn’t a game that stands any chance of putting Wolfenstein back on the first tier of FPS franchises. Given the series’ heritage, that has to be slightly disappointing.


A decidedly mixed effort. On the one hand this is a solid FPS let down by some odd choices but driven forward by a handful of great levels. On the other, it’s not quite fit to compete with the modern greats.