Available now for Xbox One, PS4 and PC

It’s madness that in 2017, a game like Wolfenstein II needs to pull double duty as a public service announcement to remind people that Nazis are, in fact, monsters. Yet this is where we are: the latest instalment in a shooter series renowned for its Nazi-slaying anti-fascist themes is met with a rousing chorus from certain segments of the internet over its unflattering portrayal of the 20th century’s greatest villains.

Thankfully, The New Colossus is a very effective PSA on the evils of Nazism. Although the alternative history of this universe leads to exagerrated war machines and dieselpunk nightmares beyond what the Third Reich had in reality, the twisted terrors encountered during the course of Wolfenstein II aren’t terribly far removed from the horrifying experiments conducted by the likes of Josef Mengele.

Where the game really excels though is in using its over-the-top, extreme take on the subject matter to examine how the evils of Nazi ideology can fester in everyday life. From hero Billy “B.J.” Blazkowicz’s childhood dealing with his father’s abuse and violent racism – delivered in fever-dream flashbacks as he recovers from the events of 2014’s Wolfenstein: The New Order – to portrayals of life in this divergent 1961 America where Klansmen and SS officers walk the streets, it’s a chilling reminder of how people’s quiet concessions to smaller atrocities pave the way for worse to come. 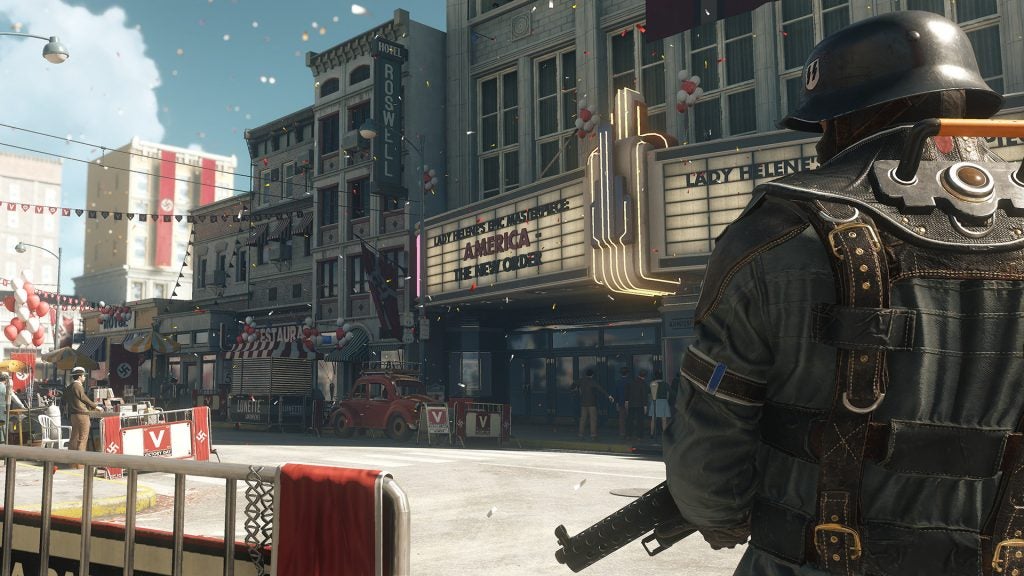 Wolfenstein II is also unapologetic about making the player face those cruelties, a luxury that can only really be afforded or indulged in with single player experiences like this. At crucial points, it forces you to not only observe but interact with shocking, soul-gnawing moments.

You’ll be forced to make decisions where either outcome is horrifying, with a branching story line that reflects the bad-or-bad decisions you’ve made. Perversely, when The New Colossus does pivot to battles against giant Panzerhunds trying to tear you to pieces with their cartoonish maws, or mowing down entire squadrons of Nazi stormtroopers, it seems almost light-hearted in comparison.

It’s not all heavy-handed moralising though. Mechanically, this improves on its predecessor without dropping the delightfully old-school first-person shooter model. Forget the likes of Halo or Call of Duty with their realistic (read: boring) weapon limits: Blazkowicz seemingly has infinite carry space and can swap between weapons at will, even dual-wielding for double damage. Does it make sense? No. Is it immensely satisfying to be a one-man gun locker? Yes.

In fact, one of the game’s few disappointments is that the arsenal on offer isn’t weirder. Sure, there are triple-barrel revolving shotguns and the occasional laser rifle or plasma cannon – all deliriously out-of-place – and some truly special but sadly limited-use weapons at key points, but it feels at times that developer MachineGames was almost restrained in some of their fever-dream weapons.

There is an improvement to the stealth elements, though. It’s not at Metal Gear Solid levels, but given enemies will call for reinforcements when you’re spotted, it’s wise to thin the herd of an area before fully wading in. The ability to set traps, or activate ones left by the friendly Resistance, also brings a sadistic glee when a horde of fascists wanders right into them.

Later, upgrades that allow you to specialise in stealth, melee, and height boosts to gain tactical advantage expand our hero’s combat skills even further, turning him into a Nazi-crushing machine – just as the new Reich, lead by a returning Frau Engel, starts unleashing even tougher soldiers and more deranged tech to test your skills against. 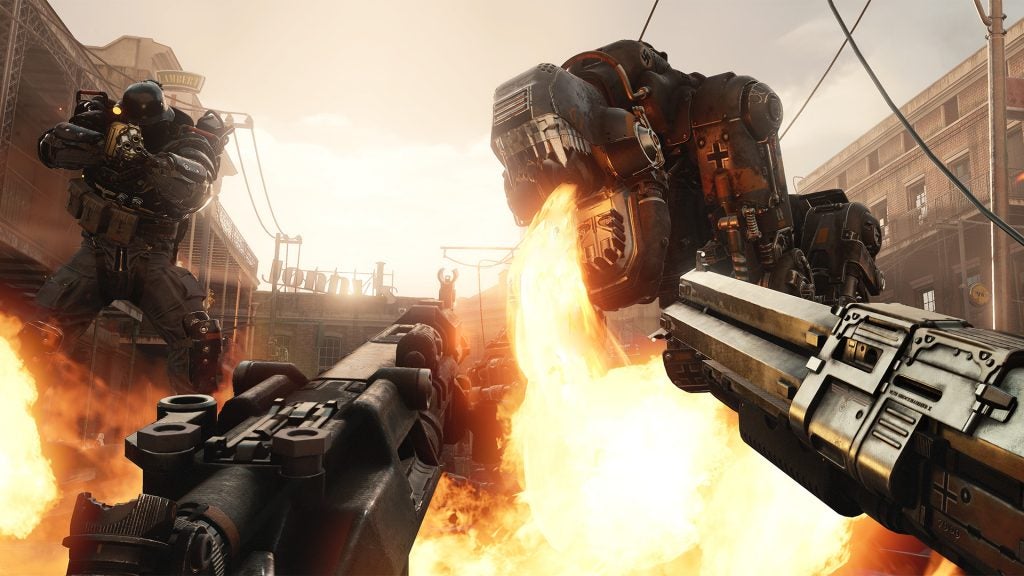 Those skills can be enhanced with perks and weapon upgrades. The former are awarded for completing actions such as a string of headshots or chained stealth kills, and unlock various play modifiers and bonuses, while the latter let you improve your arsenal, but are extremely limited and force careful consideration of which beloved boomstick you’ll boost. However, Wolfenstein II’s power creep is always competently met with an increase in enemy difficulty, and odds that somehow still feel insurmountable at times.

Levels are also improved when compared to the previous game, losing some of the linearity in favour of bigger areas to explore. There can be multiple routes to an objective, and as many ways of achieving it – wiping out enemies, meticulously taking out officers, or avoiding as many foes as possible en route, for instance.

Enemies, for their part, also do a very gratifying job of dying. They’ll react to where they’ve been shot – a reaction that is itself a nice side effect of Wolfenstein II letting you shoot armour or helmets off to deal more damage – and almost overact when they keel over. It’s a nice touch that bolsters Wolfenstein II’s cheerily gory grindhouse credentials, without feeling gratuitous for the genre.

Yet for all that effort in grunt enemy animation, there are several moments where main characters look strangely off-model, or move weirdly in cutscenes. I can’t quite put my finger on what exactly makes them look so odd, but the visual consistency and animation fluidity isn’t quite what it should be, and the effect can jar you out of key moments. 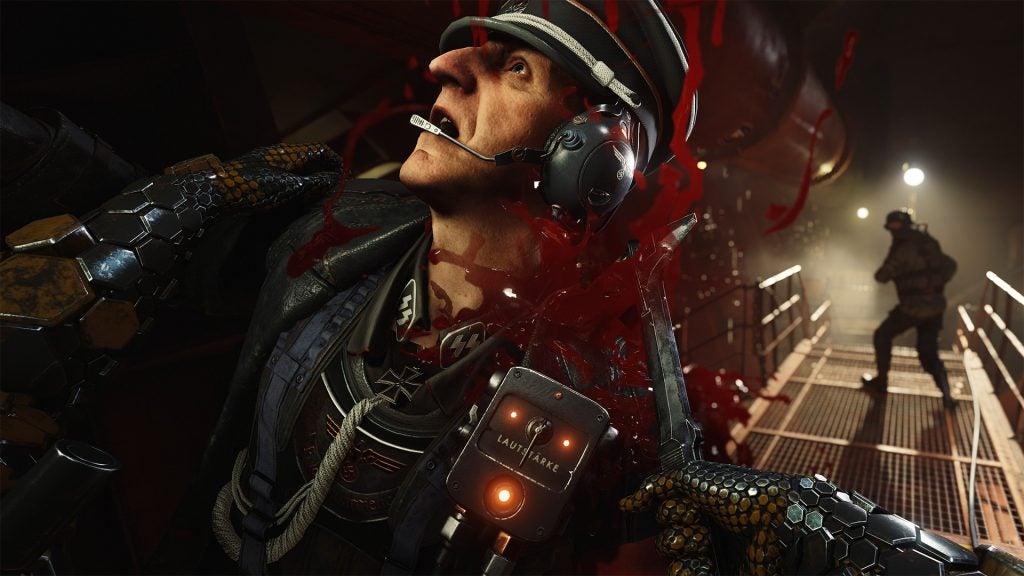 It’s a minor road bump on the path to saving America from fascism, though, and even once you’ve cleared that goal there’s more to do. For a single-player game, The New Colossus packs in tonnes of end-game material, from optional assassination missions to ways to obtain weapons locked out by story choices on your main playthrough.

Despite its unapologetic violence and disturbing moments, Wolfenstein II proves an almost joyous experience at times. It celebrates the best in humanity while simultaneously damning our worst impulses. It might drag you through an emotional gauntlet, but you’ll have a whole lot of fun on the way.

A far deeper game than its B-movie stylings would imply at a glance, Wolfenstein II also delights with its fast-paced, creative first-person warfare. Its tongue-in-cheek social commentary is heavy-handed, but there are few other games where mowing down the bad guys feels so cathartic or warranted. The New Colossus also pulls off the rare trick of being a sequel that more than lives up to the standard set by its predecessor, making this a real treat for returning players. Not to be missed.