The Wolf Gourmet High Performance Blender is an excellent option if you’re already considering a professional-style appliance. The blender is expensive, but its distinctive styling, brand credentials and neat, compact footprint are sure to appeal. Disappointingly, not every part of the appliance can be cleaned in the dishwasher, and the blender's jug has a little less capacity than comparable models. However, the reduced noise it generates for everyday tasks go some way to offset those issues.

Wolf is known for its quintessential stainless-steel American-range cookers, so it’s no surprise that the Gourmet collection of small appliances bears some resemblance. This high performance blender borrows as heavily as the matching toaster – the base is finished in sleek stainless steel, while a cooker knob-style control (available in red, black or steel) takes you through speeds 1 to 12. The general feel is stylish yet professional.

Four programmes handle the blender’s main tasks: ice, smoothie, heating soup and purée. Plus, its 2.4hp peak power propels the blades to an estimated 210mph. Perhaps just as clever is its compact size: Wolf Gourmet deliberately sized the unit to tuck under standard kitchen cabinets, which is ideal if you’re short on worktop space.

Wolf Gourmet High Performance Blender – What you need to know

Dedicated programmes are always a plus for time-poor households, and the Wolf Gourmet delivers well on this front. Not only does its menu cover the most popular functions of drinks, ice, purée and soup, but an LCD screen shows a countdown as it blends. Where the blender could be improved is by naming the programmes instead of relying on small icons around the dial – it’s easy to imagine selecting the wrong one on a busy morning. 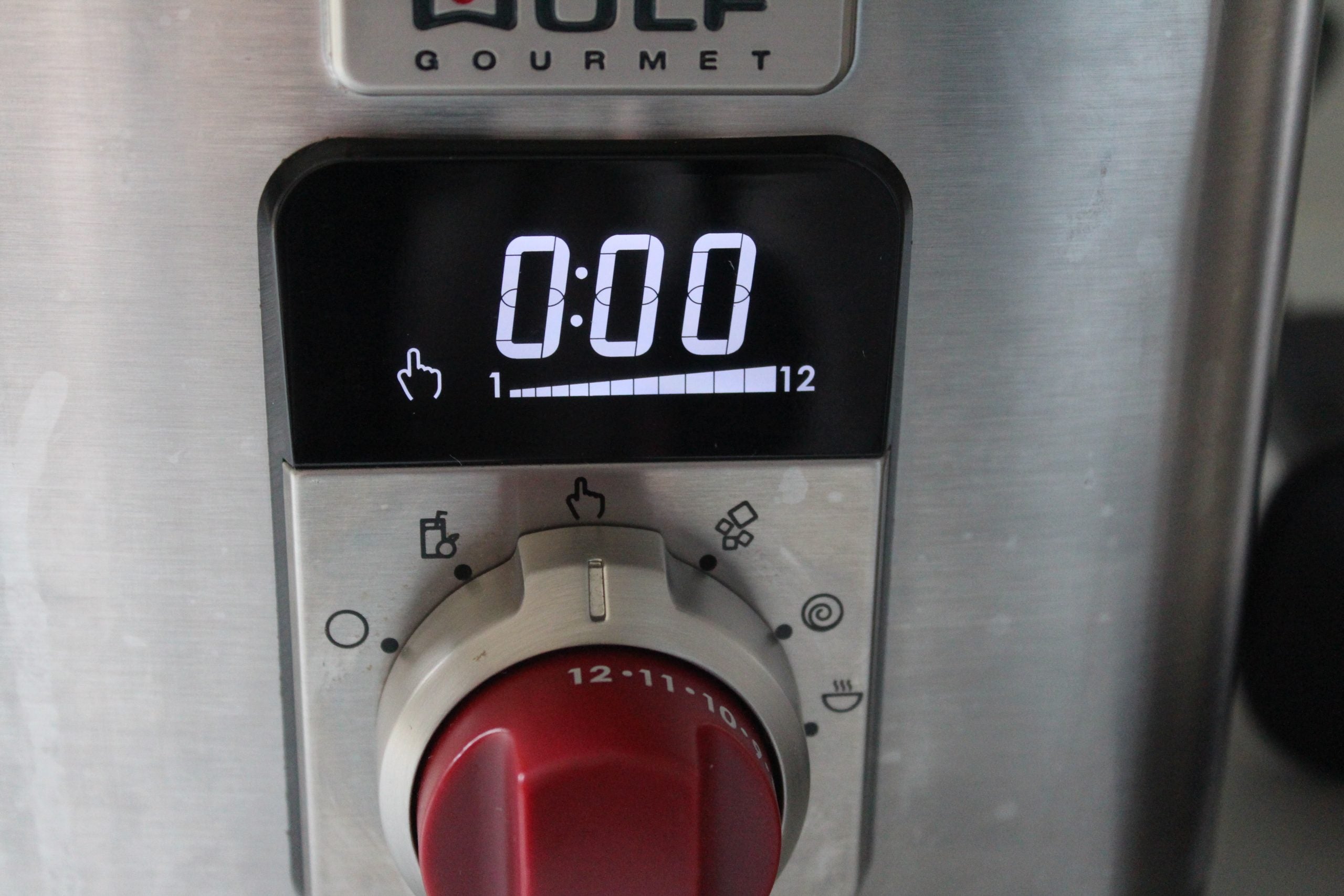 There are lots of programmes, but you’ll have to decipher the icons to select the right one

Its pulse button would also benefit from being named; it looks almost the same as the start/stop button next to it. A handy feature of that pulse, however, is that it works with any of the variable speed settings, rather than the all-or-nothing pulse buttons found on cheaper models. Essentially, this means the blender offers the best of both worlds: programmes that handle everyday tasks with ease, coupled with a more hands-on approach for sauces, dressings and desserts.

Performance – More of an investment buy, but it’s ideal for those who like to eat fresh

All the blending happens in Wolf Gourmet’s 1.6l jug, which simply drops onto the base rather than twists on. It’s designed with indentations to push food towards the blades – and, for the most part, this worked well. Only one spinach leaf escaped when I made a smoothie with the programme, which used a slow speed to start, before ramping it up. 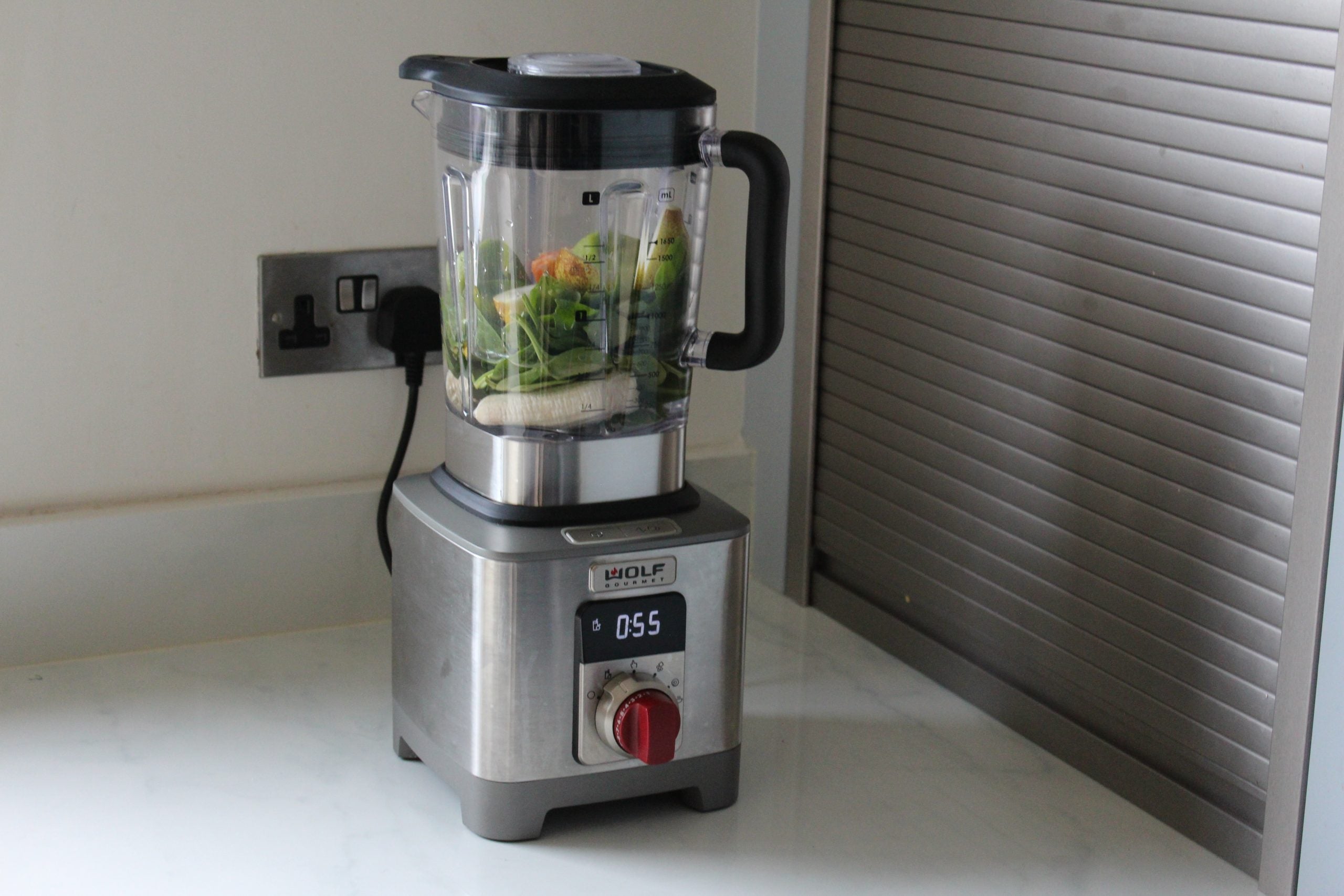 This helped to draw the contents down while making minimum noise at a fairly low, unobtrusive pitch. The hardened blades themselves are flat and appear less hazardous than the angled blades on some rival models, yet they’re surprisingly efficient at blitzing and puréeing. The finished smoothie had no trace of pear grit or stray fibres; the consistency was uniformly smooth. 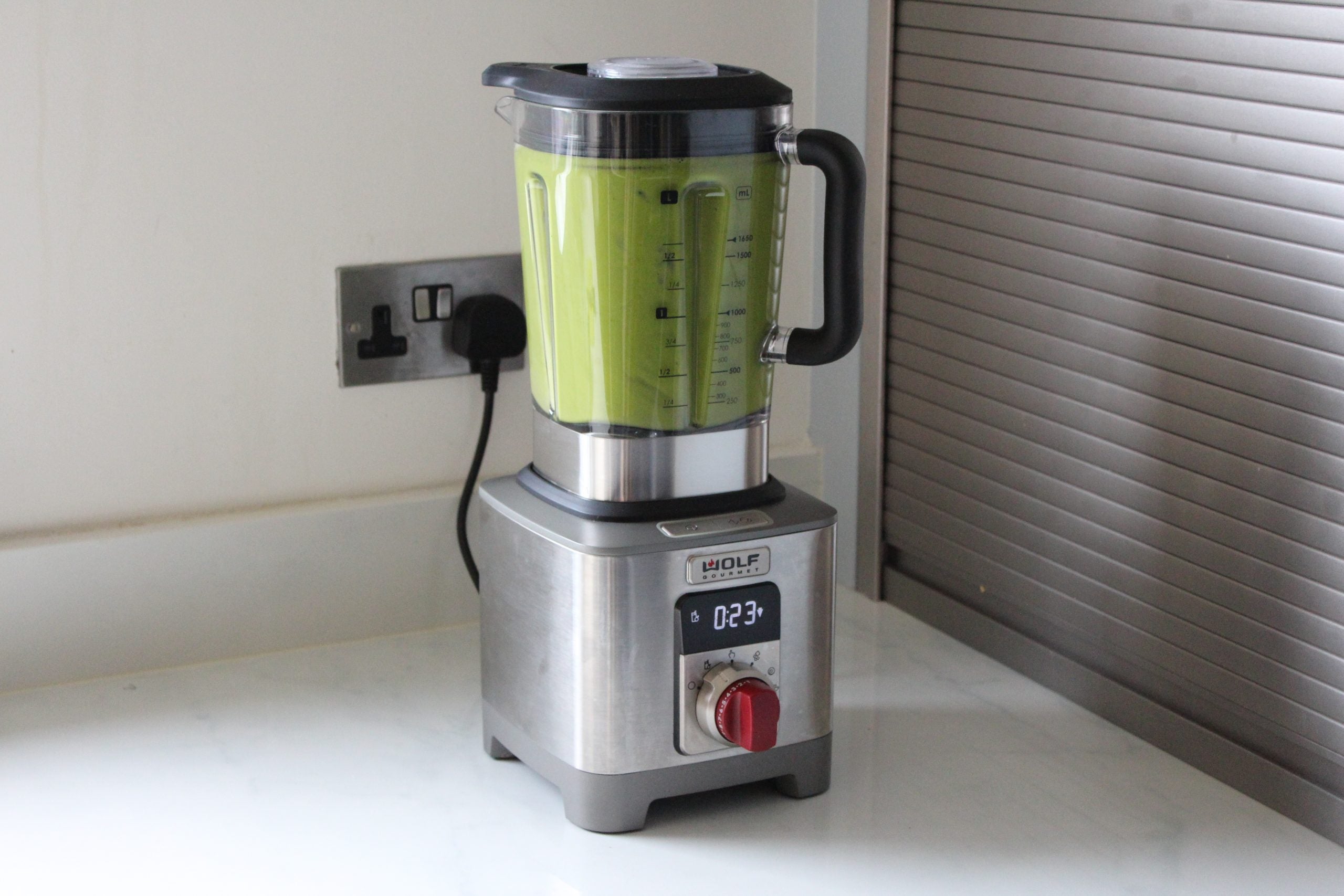 The lid is home to both the usual measuring insert but also an emulsion cup that’s ideal for drizzling oil into mayonnaise or marinades. However, I found that the two-part construction often became stuck together, making it a bit more challenging to wash by hand. I liked that the lid pushes easily onto the jug, though; there’s no twisting involved.

There’s also a tamper that can fit through the lid to move lumps towards the blades when processing thick or frozen mixtures. However, this wasn’t required when crushing ice – the pulse-style programme worked perfectly, turning cubes into snow. 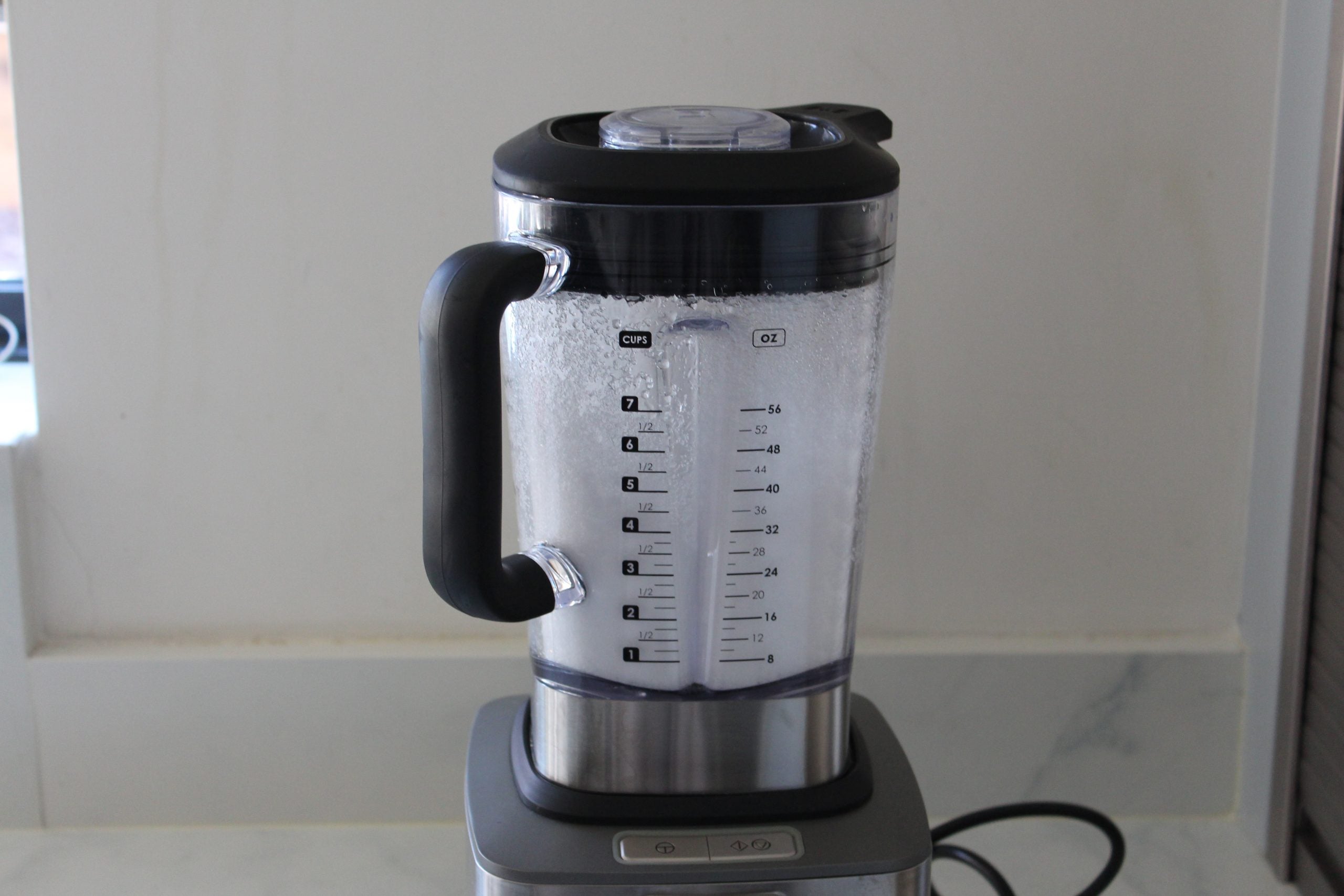 The only issue I encountered here was trying to remove the crushed ice. It had compacted and so it was difficult to scrape out, especially around the blades.

The programmes do take the guesswork out of blitzing, but I’d categorise the Wolf Gourmet as more a blender for keen cooks – its slim recipe booklet includes a variety of soups and smoothies, but also directions for creating nut milks and butters, fresh-milled flour and syrup. There’s even an optional 1l jar for making smaller amounts of these – although for this price, you’d hope that it would already be in the box.

I was particularly impressed with its fresh, hot soup-making setting – a 6-minute 45 programme that was the noisiest of the lot, but very capable. Once it was complete, the soup was piping hot and smooth. again, the only issue was scraping out the relatively thick mixture from around the blades. I found the Tritan jug quite heavy when tipped using only one hand; however, it was lighter than a glass jug. Another plus is its wide spout, which is great for pouring and it didn’t drip or splash. 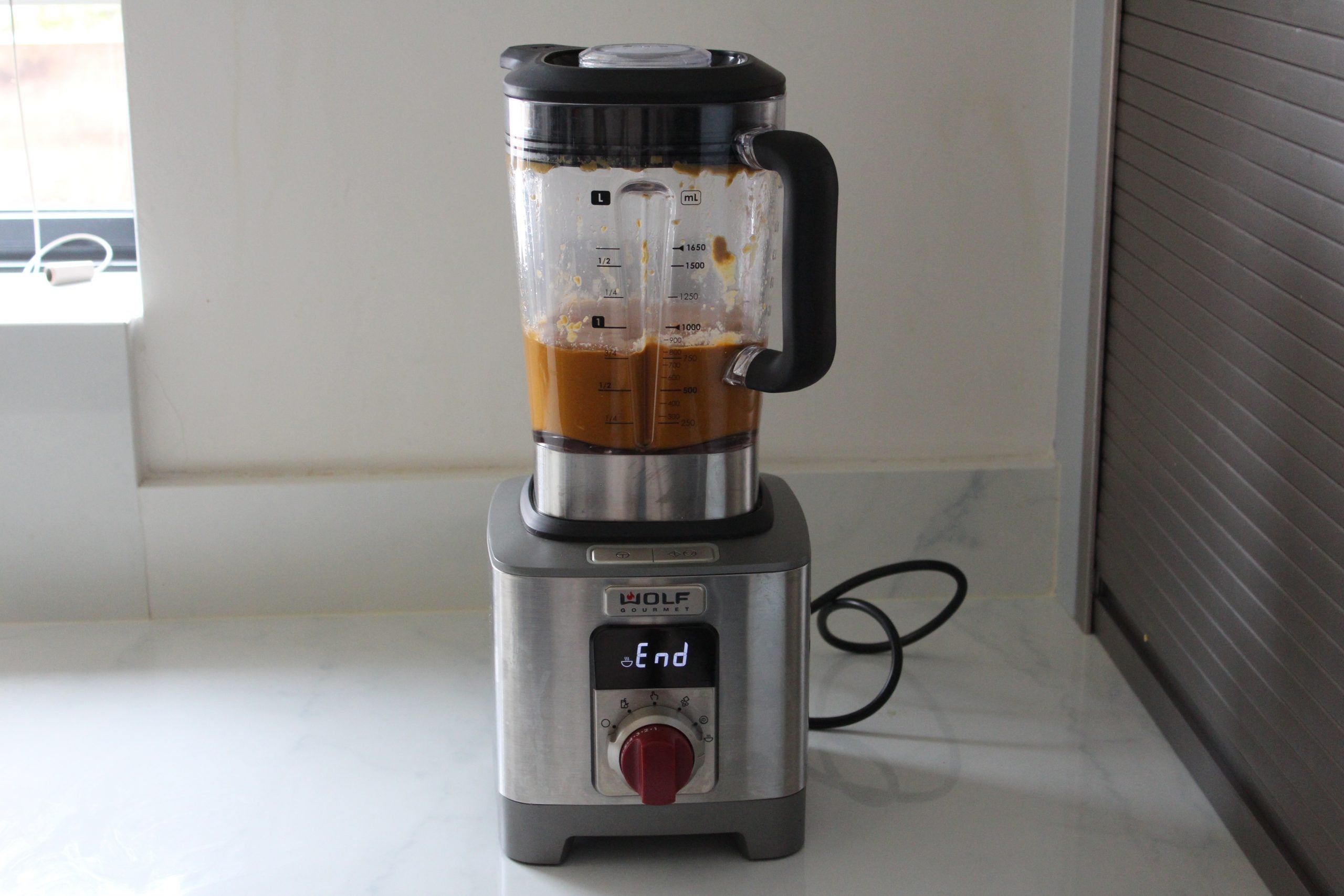 Clean-up  was more difficult than I’d anticipated. While the lid, tamper, emulsion cap and jar pad were all dishwasher-safe, it’s recommended that the blender jar is either cleaned by hand or by blending water and washing-up liquid in-situ. Cleaning this way didn’t take more than a minute or so, resulting in a spotless jug, but it lacked the convenience of being able to pop all of the appliance’s parts into the dishwasher after use.

Should you buy the Wolf Gourmet High Performance Blender?

Close to £600 seems like quite a lot of money to splash out on a blender. However, that price appears justified if you plan to explore the full range of the Wolf Gourmet’s capabilities; it’s a soup-maker and smoothie machine and can also handle a fair amount of what you’d ask of a food processor. For this reason, it’s likely to appeal to keen cooks who cook food from scratch, those who want to eat more healthily, boosting the recommended two or three-a-day to five.

Note, too, that the Wolf Gourmet offers robust build quality, with its five-year limited warranty speaking to its makers’ confidence that it can handle almost anything you want to blitz or purée.