What is the Witt Smoothie Juicepresso

For those with preconceptions about juicers, meet Witt’s Smoothie Juicepresso. It’s great for using any time of the day or night, because it’s quieter than a centrifugal juicer at around 53.4dB.

Next, it’s a slow juicer, meaning that instead of blitzing and spinning fruit, it squeezes the juice out at about 40rpm to preserve as much nutrition as possible – yet it’s efficient, so you won’t be waiting around.

Finally, it’s ideal for anyone who struggles to eat their five-a-day, because it can handle frozen fruit and vegetables, making smoothies, shakes, lassi, parfaits, granita, sorbets and slushes that taste so good, you’ll forget that they’re healthy.

Juicers can rarely be described as “sleek”, but the Smoothie Juicepresso is as close to sleek as they come. Its glossy base unit comes in red, silver or white, and there aren’t even any buttons on the front. Instead, hidden at the back is a solo rocker switch to turn it on and off, or into reverse to clear clogs.

On top, a twin-spouted bowl holds the juicing components, which consist of a screw that attaches to either the smoothie accessory or the juicing filter. Swapping these is the only thing that needs to be changed to switch between making juice or handling frozen ingredients. 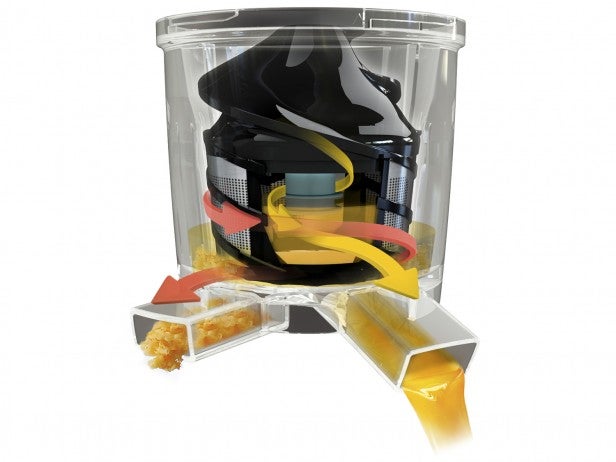 Completing the setup, there’s a flip-top cover for the juicing spout to prevent drips, a feed chute that fits on top of the bowl, a pusher to nudge chunks of fruit in, and a pair of jugs for juice and pulp or frozen desserts. The feed chute is slim, which increases prep time, but this helps to prevent the machine from becoming overloaded.

Witt Smoothie Juicepresso – What is it like to use?

The Smoothie Juicepresso feels complex at first, since it’s split into parts. However, this ensures that there’s nowhere for food to gather. There’s a recipe booklet of frozen dishes to try, but no ideas for juice combinations. 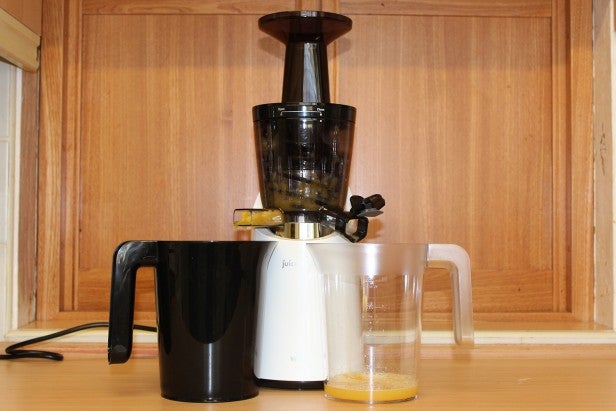 We started by making orange juice. After peeling and chopping two fruits into chunks, we fed them into the chute while the juicer was running. As the juice poured out of the right spout, pulp was ejected from the left. The flow of juice was smooth, with no spurts or dribbles, while the pulp was slightly wet at first but drier as juicing continued.

Once finished, there was minimal pulp in the jug and inside the juicer, with an impressive amount of juice produced – around 200ml. Switching the machine on and off round the rear was a little awkward. We used the stopper to seal the spout once we were done, and there were no leaks on the worktop. 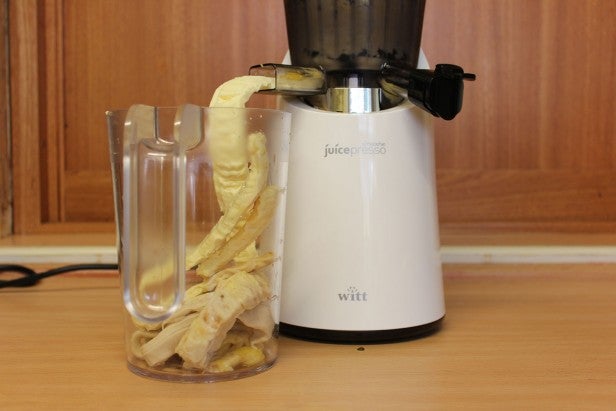 Next, we tried one of the recipes – a “modified” Frappuccino. This combined frozen banana and pineapple, which was then mixed with coconut milk. All the fruit in the recipe requires pre-prep and freezing for at least 12 hours, so you’ll need to plan ahead.

Swapping the juice filter for the smoothie accessory, we added chunks of frozen banana to the machine. This was ejected from the spout where you’d usually see pulp, in the form of a smooth paste. Once or twice, it was so firm that it breached the edge of the jug. We followed this with the frozen pineapple, before mixing the fruit with coconut milk in a blender.

The resulting drink was delicious – sweet and creamy, with only a small amount of detectable pineapple fibre. The screw and accessory needed only a quick rinse to be ready for use again. 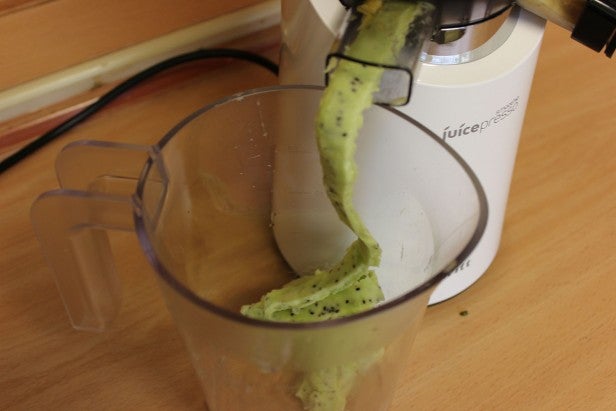 Moving on to the Kiwi yogurt smoothie recipe. We added pieces of peeled, frozen kiwi to the Juicepresso. Again, the paste produced was smooth, and there was very little residue left inside the bowl.

We then added sweetened yogurt, and finished by processing frozen orange to make a slush designed to be mixed with beer. Before use, the oranges had to be peeled, segmented and deseeded, so this recipe felt especially prep-heavy. Adding the segments to the chute, the Juicepresso turned them into a mixture with the consistency of sorbet. As they were still quite firm, it was difficult to combine the beer, plus there was some pith remaining. There was also orange left inside the juicer.

All the parts of the Juicepresso are dishwasher-safe, but just as easy to wash by hand. Included in the box is a cleaning brush with a pointy end, which was great for getting into tight spots and made clean-up easier than with most juicers. 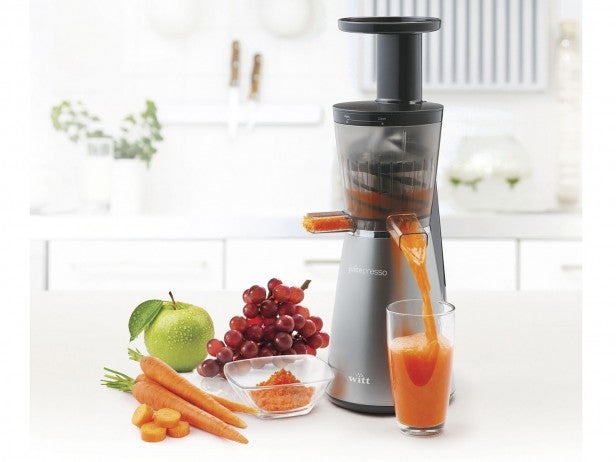 Should I buy the Witt Smoothie Juicepresso?

If you’ve fallen out of love with juicing, this could be just the machine to reignite your affair. Not only is it simple to maintain and makes great juice, its ability to turn frozen fruit into exciting desserts is a big plus for families.

The Juicepresso is tall but otherwise pretty compact, so it’s a win for smaller kitchens and those with limited storage. The only real drawback is the price – it’s definitely an investment buy.