What is the Withings Home?

The Withings Home is an internet-connected camera that promises to be all things to all men. The health-focused smart device company is pitching the Home as a security camera that detects motion and sound in your home when you’re not there, letting you live-stream footage from the camera through your smartphone.

The Home is also being sold as a baby monitor with infrared night vision to allow you to keep an eye on your child, and can function as a pet cam, allowing you to talk to your pet remotely through the built-in speaker. The device cal even monitor the air quality in your home to make sure Fido or Spot are in a healthy environment.

The first thing you’ll notice about the Home when you take it out of the box is its excellent build quality and design. It features an outer shell made of a wood-effect material, which can rotate to hide the camera when it isn’t in use – a key feature for privacy-conscious users. The base is home to a backlit-LED section that flashes different colours to alert you to different states (connected, searching for Bluetooth, and so on), as well as acting as a night light when in baby monitor mode. 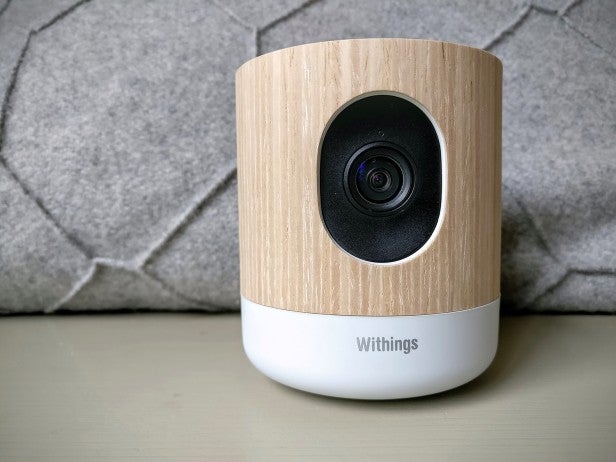 The camera sits in a concave magnetic base, which allows for the camera to be positioned exactly the way you want. Other cameras, such as the Samsung SmartCam PT SNH-V6410PN, let you do this remotely with motorised pan and tilt.

The setup process is straightforward. Download the Withings Home app, which is now available on Android as well as iOS, and plug in the camera unit. The app then walks you through the setup process, with the LED base displaying your progress: pulsing blue while waiting for Bluetooth pairing; pulsing orange while waiting for Wi-Fi connection; solid green indicates a successful setup; solid red means setup failed. 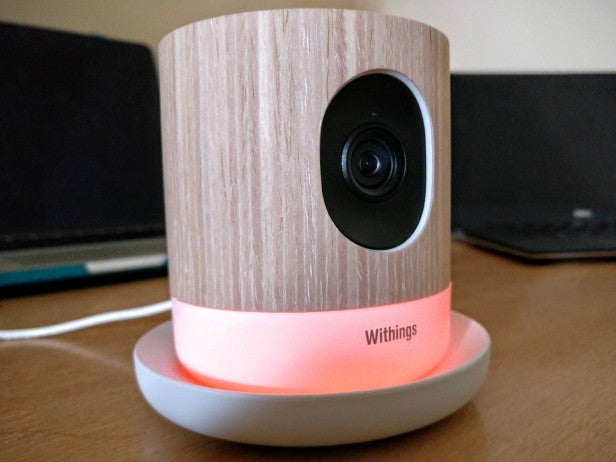 Where you choose to locate the unit is limited by the length of the power cable, but because the Home uses a micro-USB connector, I was able to attach it to a battery pack rather than a wall socket, which meant that – temporarily at least – I was able to position it wherever I wanted.

The Withings Home has four modes: Active Monitoring, Baby Monitor, Do Not Disturb and Off.

Active Monitoring is for use when no-one is home, and provides alerts to any noises and movement. Any unusual noises, a rapid deterioration in air quality and unexpected movement will all be recorded by the camera and sent to your smartphone – you’ll be alerted via a ping. It’s possible to connect several smartphones to the one camera, so that everyone in the family can receive an alert, although this isn’t necessarily a good thing.

I found the camera to be overly sensitive, alerting me to sounds and movements that were almost imperceptible when I viewed the footage. Withings says it learns over time about the environment in which it’s operating and will tweak the number of alerts it sends to your phone. However, in the time I was using it, I didn’t notice any improvement in its ability to distinguish what was a significant event worth reporting. 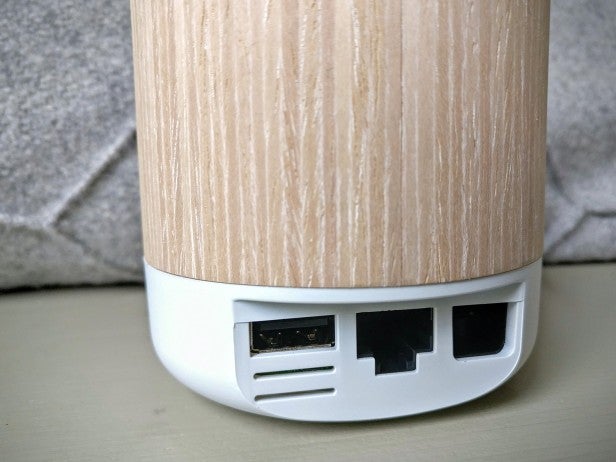 In Do Not Disturb mode, the camera records events but you won’t be sent any notifications to your smartphone. This allows the Home to produce timelapse videos of the past 24 hours, giving you a neat look back at what happens in your house over the course of the day.

Baby Monitor mode does as you’d expect. With this enabled, and the app running in the background, every cough and cry will be delivered to your smartphone, while the infrared camera will allow you quickly see whether or not you need to get off the couch.

The Home also has a built-in lullaby mode. This plays soothing sounds and is accompanied by a glowing light display, which works really well. There’s also a two-way speaker that you can use to try to settle your child by just tapping the microphone icon in the app. (This feature is also great for scaring off unsuspecting guests in your home.)

But again, the problem with Baby Monitor mode was an overly sensitive sensor, where noises from downstairs (TV, conversation, and so on) echoed through the Home camera and back through our smartphones; it quickly became very annoying.

Helping the Home stand out from its competitors are its multiple environmental sensors, which allow you to constantly measure air quality, including a VOC (volatile organic compound) sensor.

VOCs are a large group of carbon-based chemicals that easily evaporate at room temperature. They’re a good indicator of the air quality and the ventilation of the room. The Home app provides a nice chart of how your home’s environment has changed over time, and any rapid increase in VOCs will result in an alert being to your phone, encouraging you to open some windows or doors and get some fresh air into the house. 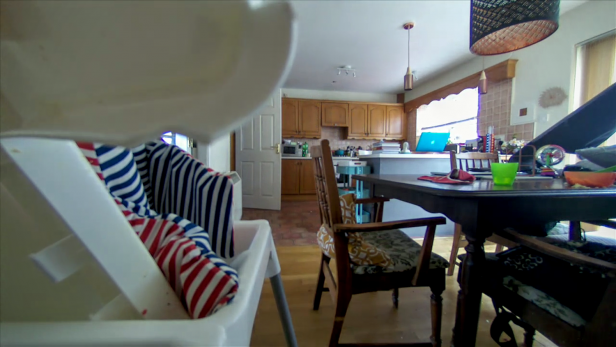 The camera has a 135-degree wide-angle lens that provides a decent view of the room in which the camera is positioned. While you can’t control the camera movement remotely, you can zoom into recorded footage and pan around the image to focus on a specific point.

Image quality is another area where the Withings Home falls down slightly. In both day and night vision modes, the claimed 1080p resolution at 30fps never really materialised. While the footage in night vision mode is generally fairly sharp, and you can at times recognise someone’s face, much of the time the IR LEDs oversaturate a person’s face so that identification isn’t possible.

By default you can record only two day’s worth of activity on the Withings Home, but this can be increased via subscription to the service, either for seven days (for £7.95 per month) or 30 days (for £19.95 per month). Note, however, that there’s no way to currently download the footage. 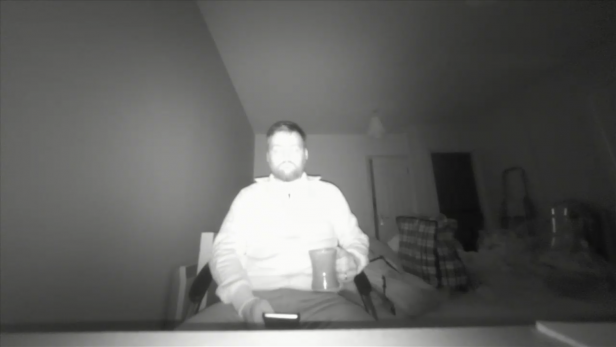 The iOS app has been around since launch and is slick, but the Android version is clearly a work in progress. It was flaky, slow, and at times just broken. Indeed, the iOS app is also pretty slow and users should be aware that if you open the app near the camera itself you’ll get plenty of interference – which isn’t ideal if in Baby Monitor mode.

Withings has also launched an Apple Watch app that lets you keep tabs on your home from your wrist – if you’re not energetic enough to get your phone out of your pocket.

IFTTT integration allows you to automate the turning on and off of the camera based on time, location and other factors – but again, this didn’t work as advertised. I received notifications that my camera was switched on hours after leaving the house, and with more than one person connected to the camera, the app had difficultly reconciling which device it should be following. 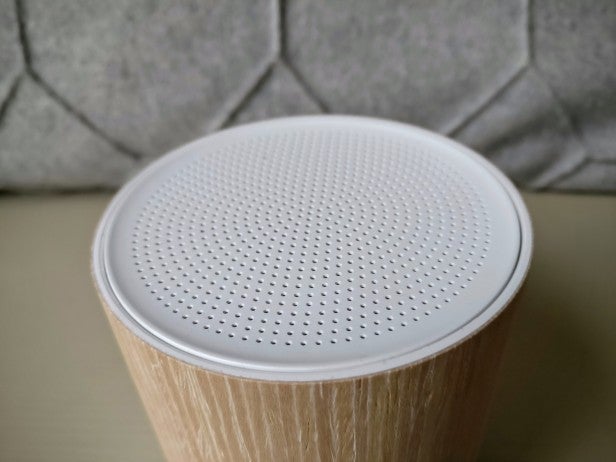 Should I Buy The Withings Home?

The Withings Home looks good, but it suffers from a number of annoying problems. Flaky apps, overly sensitive sensors and video quality that is far lower than that stated, means the Withings Home doesn’t quite live up to its promise. While it’s listed as £169.95 on the Withings online store, you can purchase it for £119 on Amazon at the moment, which makes it a far more appealing prospect.

However, there is plenty of competition in this space. The Nest Cam at £169 costs the same as the Home, while the Piper NV may cost £60 more but does offer better image quality and free cloud storage. For £200, the Netatmo Welcome offers facial recognition and the ability to record your footage directly to an SD card.

If you’re a fan of unique design then the Withings Home could be for you, but until the company fixes the apps and tweaks the sensors, there are better options out there.