What is the Nokia Body Cardio?

Regularly weighing yourself can be a faff, as can finding somewhere to record that data afterwards. That’s where smart scales come in. With no shortage of Wi-Fi-connected smart scales now available, Withings has tried to differentiate its Body Cardio by using its own measurable, known as Pulse Wave Velocity.

This uses your standing heart-rate measurement and provides a way to monitor your overall cardiovascular health alongside your weight. The scales will also deliver other data such as your muscle mass, body-fat percentage and even offer a weather update, making them some of the most versatile scales on the market – but they’re pricey.

Update: Since our original review, the Withings Body Cardio has now been re-branded the Nokia Body Cardio due to the acquisition of Withings. The device is the same except for the new branding.

Withings has packed a lot of tech into a surprisingly attractive package. This is good news, considering that if you’re meant to use the Body Cardio every day, chances are you’ll leave it out on display for convenience.

It’s available in white and black glossy finishes. The Body Cardio measures 17.8mm thick and it looks slick and sophisticated with its glass top and aluminium base. It’s a little prone to smudges, however. A vertical divider runs down the centre to help you position your feet. 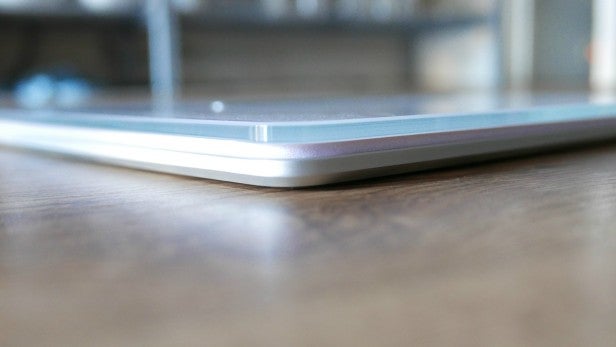 On either side of the surface you’ll find horizontal contrasting bands, too. This is where the scale’s electrodes are tucked away. At the top of the scale is an LED display that runs through all of the different measurements. You can use the accompanying app to configure what you want it to show.

There’s a Micro USB port along the bottom edge for charging the scale’s rechargeable battery, but it isn’t something you’ll use often, since the battery should last for a year before needing a charge. 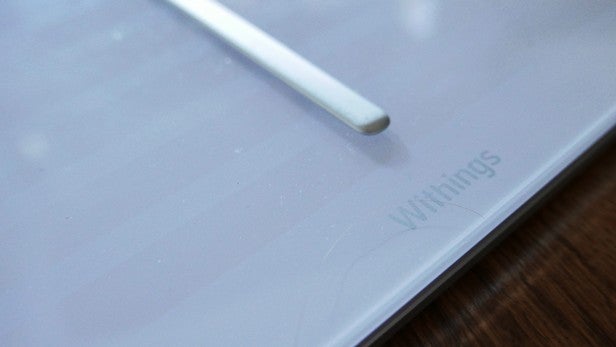 The Body Cardio is designed to be used on any surface, whether that be hard floors or heavy carpet. It’s a nice change from other smart scales that recommend use only on hard floors.

Setup is incredibly easy. You just need to install the Withings Health Mate app for either iOS or Android devices, then press a small pairing button next to the Micro USB port. The app will walk you through the process of adding your Wi-Fi details to the scale and install a software update.

Once that’s done, you can take your first measurement. You’ll need to record five weigh-ins as a baseline before the scales can calculate your Pulse Wave Velocity.

A heart-rate measurement is taken to provide your standing heart-rate figure. For consistency of results, Withings recommends you take a measurement at the same time each day, preferably before you’ve had your morning coffee. I got into the routine of rolling out of bed and immediately onto the scale.

The headline selling point of the Body Cardio is its Pulse Wave Velocity (PWV) measurement. This is designed to gauge your arterial health. The idea is that your heart generates a “pressure wave” along your arteries, and the speed of this is an indicator of your overall cardiovascular health. It pays to be slow here; a fast reading is said to indicate stiffer arteries, which could be a precursor to developing hypertension or other cardiovascular diseases. 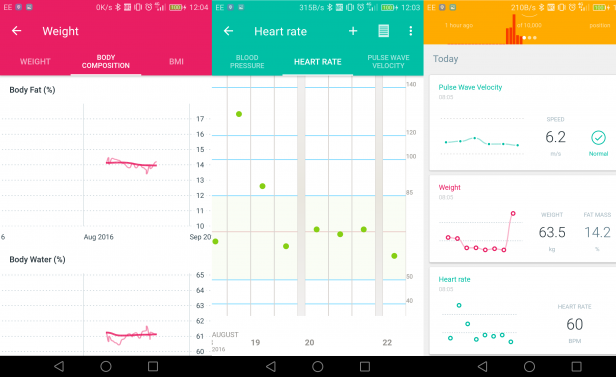 Your PWV score is provided in metres per second, and takes into account your age and gender. An “optimal” speed is around 5.3m/s, whereas a “not optimal” score is towards 9.2m/s. The speed is calculated by measuring the time difference between blood being ejected by the aorta in the heart and its arrival at your feet. It isn’t immediately obvious how the scale knows when blood is being ejected from your heart, however.

In the month of testing, my PWV score remained firmly around the 6.3m/s mark, although it did spike at 6.7m/s ad 6.8m/s across a two-day period. This puts me in the “normal” range of the spectrum. The issue is that it isn’t immediately obvious what this means.

While the app and accompanying documentation on the Withings site allude to being able to reduce your PWV score by encouraging you to reduce salt intake, lose weight, drink less alcohol – so the usual advice – I wasn’t able to identify the cause of that spike nor draw any correlation. My sleep, exercise levels and stress were the same as always.

Perhaps I’m biased (or deluded), but I also thought I’d have a score closer to an “optimal” PWV. I exercise regularly, I eat well, I drink alcohol very rarely. I’m not sure what else I could do to get a lower score, and the vague advice offered in the Health Mate app doesn’t help. If you’re overweight, you probably know that making more positive health and lifestyle choices will do you some good; you don’t need another ambiguous metric to tell you that. 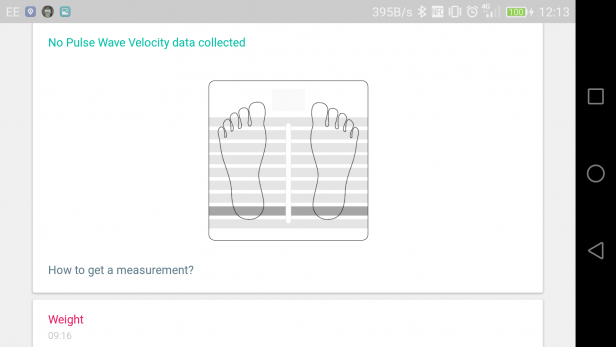 Then there are issues with obtaining a score in the first place. On more than one occasion the app would report it was unable to generate a reading, even though the scale had at least shown me my standing heart-rate measurement. Frustratingly, showing your PWV score on the scale itself isn’t one of the options, so you’re not aware of the fact that the reading hasn’t been taken until you open the app or receive a push notification.

Thankfully, the rest of the measurements aren’t prone to wild deviations, but the numbers do fluctuate a little. Body-fat percentage still isn’t particularly accurate for those already at a low percentage, but that’s a common issue with most bioimpedance scales. The fact that it’s consistent is at least useful for tracking changes. 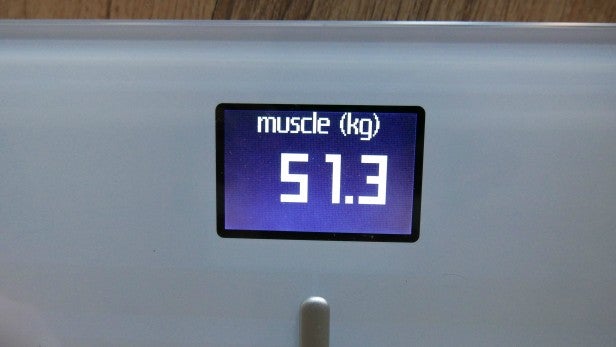 Muscle mass readings over the month-long test period displayed a 1kg deviation and a worrying downward trend. Considering my strength increased over that period in the gym, I’m not sure how much weight I put behind its findings. Bone mass remained 100% consistent throughout, which is to be expected unless you have any existing health conditions.

You can set a target goal weight in the app as well as a pace of weight loss. The Health Mate app also integrates with MyFitnessPal if you want to log your food intake for detailed calorie counting. 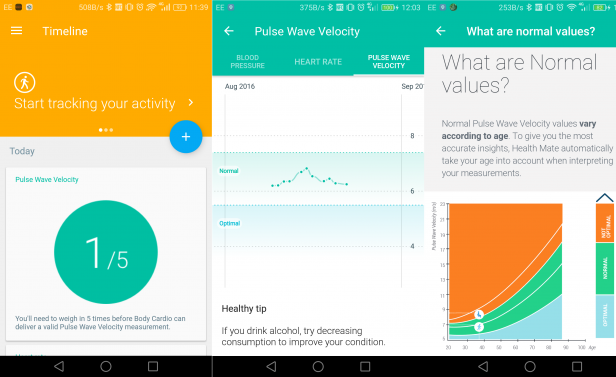 If you use a Withings tracker, such as its Pop, you can also have your previous day’s steps shown on the scale’s display, which I liked. Alternatively, if you don’t have a Withings tracker then it can just use the step-counting function of the Withings Health Mate app from your smartphone.

The weather update provided by the scale is surprisingly useful, too, and helps make stepping on the scale feel more like part of your morning routine. The Health Mate app can also pull in extra data such as blood pressure if you own one of Withings’ other compatible devices. 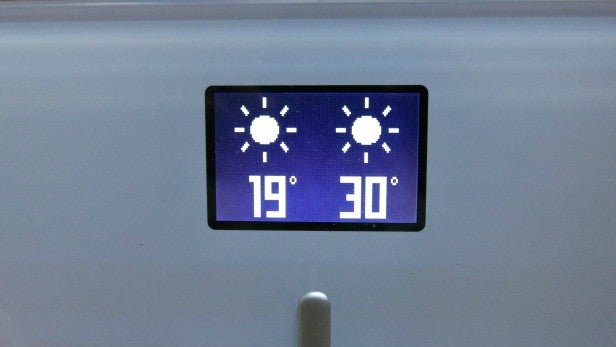 All of these measurements are thoughtfully displayed in the Health Mate app. The syncing process is incredibly quick, too. I could step off the scales then grab my smartphone and in the momentary time in between the data was already synced to the app’s dashboard.

You’re able to dive into each metric – muscle mass, for instance – and your measurements are plotted on a graph. A trend line is then used to show your general progress. A recent update to the app will also let you manually log exercise. The scales can support up to eight different user profiles, so you can share it with the family.

Should I buy the Nokia Body Cardio? 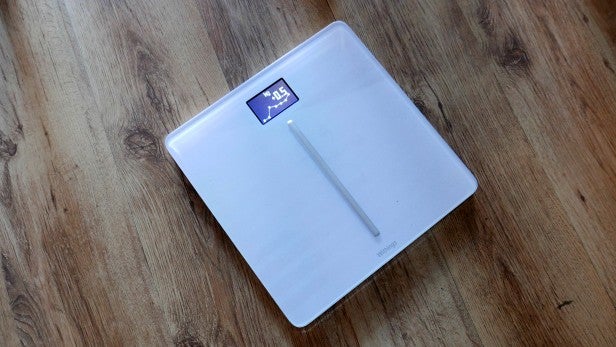 The Nokia Body Cardio provides plenty of data, the app is straightforward and well presented and means you can identify patterns easily. The year-long battery is also excellent and it’s easily charged.

However, the jury is out on the usefulness of the Pulse Wave Velocity measurement, and while the app provides lots of other information, it’s very short on actual guidance and advice. It doesn’t do well at explaining what the measurements mean, nor how to actually improve your health with personalised coaching. The unreliability of PWV measurements was also frustrating.

In the end, the Nokia Body Cardio is expensive once you consider the actual value of all of those metrics. It will be overkill for most and, arguably, Withings’ Body (non-Cardio) scale is a better choice, since it drops the heart rate and PWV measurement but saves you £50.

The Nokia Body Cardio packs in plenty of measurements, but its headline Power Wave Velocity feature is underwhelming.