What is the Withings Aura?

The Withings Aura is an alarm clock, speaker and bedside lamp in a single device. Not only does it aim to help you get a good night’s sleep, it will also gently wake you up in the morning.

With the addition of the sleep sensor accessory that sits underneath your mattress, it can monitor and analyse sleep cycles too. However, this pushes the already expensive £200 price tag up to around the £300 mark. This seems a little high, especially when fitness trackers such as Withings’ own Pulse O2 can offer similar insight for £100.

As a perennially bad sleeper, I considered myself to be the ideal person to determine whether the Aura is really worth all that the money. Over several months of using the device, I can happily say that I dropped off to sleep far quicker than was the case with life before it. However, I was left disappointed by some other aspects of the Aura experience. 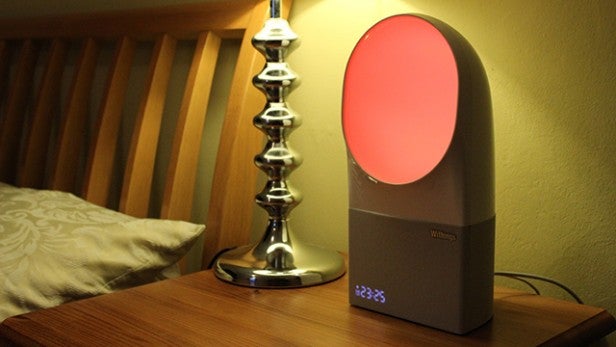 Before you invest in the Withings Aura, make sure you have a table at least 1m from your bed and you’re wiling to sacrifice some space on it.

The funnel-shaped device measures 11in high and is about the same thickness as a couple of paperbacks. It isn’t anything to look at, despite Withings’ claims of an “elegant design that fits diverse room styles”. For a start, it’s predominantly made from plastic.

The plastic section houses the dynamic LED lighting, which illuminates the interior of the unit. Around the outside and top of the Aura is the touch-sensitive interface, and it’s here that a series of swipes, taps, or long presses activate features such as turning off the alarm.

Unfortunately, finding the sweet spot can be troublesome. I’ve spent many a morning trying to deactivate the alarm, finally resorting to turning it off from the companion app via my iPhone instead. 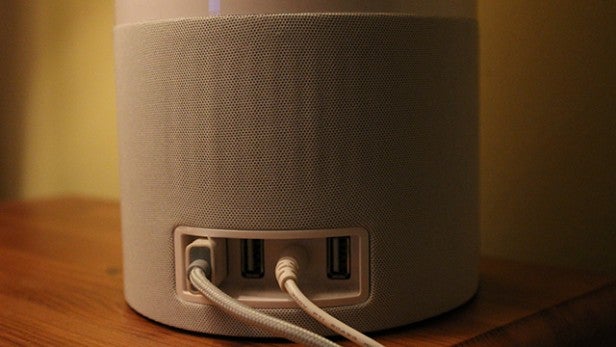 So what do the LED lights actually do? First, when you’re falling asleep, the light and sound program will fade over a time span of roughly 20 minutes to encourage the release of melatonin. This is a hormone that’s secreted by the pineal gland in the brain, whose levels peak in darkness to induce sleep.

Then, in the morning the Aura will do the reverse, gradually increasing light and sound to bring you back to a state of alertness. The device’s aim is to wake you slowly, to avoid the shock suffered when using a regular alarm clock.

The bottom half of the Aura is covered by a light grey mesh, behind which you’ll find the speaker. It is from here that the sound programs are emitted. With Spotify Connect support, it’s possible to set up your own playlists as well as Withings’ own custom sleep playlists. 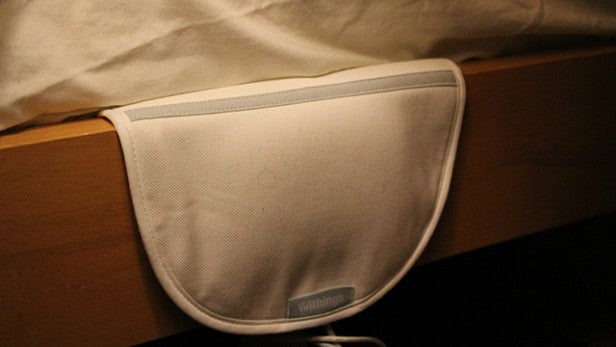 The Aura also houses environmental sensors, which aim to monitor room temperature along with light and sound levels to ensure that the surroundings are at their most optimum to help you get a good night’s sleep.

When the Aura is turned on, you’ll see the small digital clock display surface through the mesh speaker; it gradually disappears as you fall asleep, which is a nice touch. What isn’t so nice is that the clock display is quite small, which means if you have anything else on the bedside table, you’ll need to clear some room to see it. The option for a bigger display would’ve been nice.

Around the rear you’ll find some connectivity ports. There’s one for the proprietary power supply and two USB ports to support each of the sleep sensors. An additional one provides support for charging iOS devices.

For the full Aura package you need to invest in the sleep sensor. Wrapped in a washable cloth, part of it slips under the mattress to sit beneath your chest, while the sensor hangs outside the mattress. A 4m USB cable provides plenty of length to position and connect the mat into the rear of the Aura bedside lamp.

Unlike the majority of fitness trackers, which use an accelerometer motion sensor to detect movement during sleep, the Aura sleep sensor can monitor movement, respiration and your heart rate to provide a more comprehensive view of your sleep cycle. At least that’s the theory. 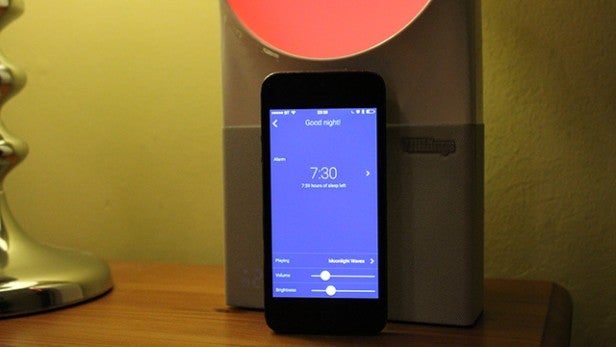 While you can activate sleep monitoring and alarms directly from the lamp, having an iPhone and the Withings Health Mate app is essential to reviewing data and setting up the Aura. A desktop app is available too.

The free app was previously available for iOS only, but Withings has since added Android support for smartphones with Bluetooth Low Energy running on 4.3 Jelly Bean or higher. While the experience is consistent across both, it’s clearly better using an iPhone.

There are issues, however. Connecting the lamp and sleep sensor is easy enough, but if you haven’t connected it for a day or two then it makes an unsettling buzzing noise for a minute or so that sounds as if there’s some problem. 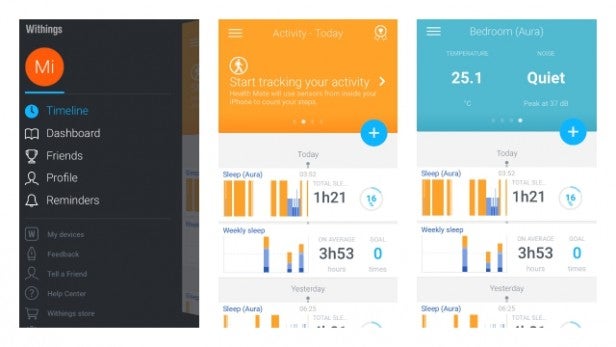 Iinitially tried to set up the Aura with an iPhone 5 running iOS 8.0. Unfortunately, the handset struggled to recognise the Aura as a Bluetooth device. This is odd, considering that the Withings website states support for the iPhone 4S and later.

I unplugged and plugged in the device numerous times – it took a few days before it worked. There was no issue with the iPhone 6, however. Either way, it’s something that older iPhone users should be aware of.

The app is sleek, streamlined and easy to navigate. In the top left-hand corner sits a shortcut to the dropdown menu, from where you can quickly jump to sections such as the dashboard. It features the same butterfly progress icon used for the Withings Pulse activity trackers.

From here you can also view currently connected devices, set up reminders and plenty more. The My Devices section is where you can add Spotify Connect support, as long as you have a Spotify Premium account.

You’ll spend most of your time in the Timeline section. Here you’ll find a feed of your logged sleep activity. You can get a quick glance at total sleep and a percentage of target sleep duration.

Tap on the logged sessions and you’ll be able to view a breakdown of your night, including heart-rate data, how long it took you to fall asleep and to wake in the morning. It is possible to see how that data compares over the week, but there’s no way to analyse the data over a month, or more long-term in fact. 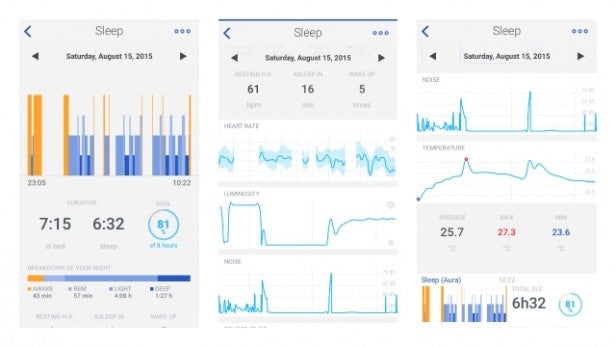 In the area at the top of the timeline you set up sleep or nap alarms, start tracking activity from your iPhone, set a target weight and view environmental data. The latter needs to be synced from the hardware, but I rarely saw that data appear.

To add an alarm, simply swipe up/down the screen with the small smart wake-up button to indicate when the waking up process should begin. The Programs section lets you pick from Withings’ own original tracks, or you can opt for a Spotify playlist or an internet radio station.

Volume and brightness toggles allow you to customise the level ofsound and strength of light to which you’d prefer to rise. 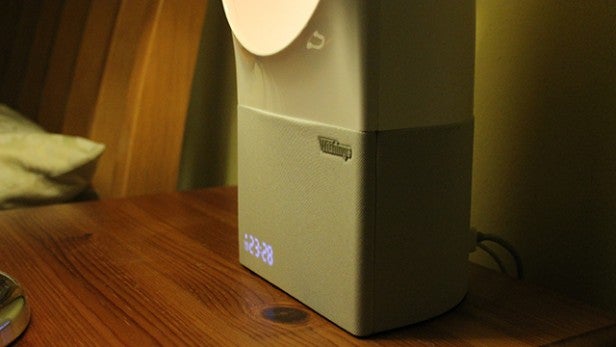 As already mentioned, I’m not a great sleeper. However, with the help of Aura’s sleep program, I found that – with the TV turned off and the lights illuminating the room with the sounds of crashing waves – I was able to drift off to sleep comfortably.

Waking offered a similar experience. As the TrustedReviews team is well aware, I’m not a morning person. However, the gentle smart alarm worked wonders. Even when I’d managed to achieve fewer than the recommended seven to eight hours, the Aura roused me gently from a deep sleep.

Withings claims this is a high-quality speaker, but don’t expect Sonos-style sound quality. It’s loud, but it doesn’t scream with finesse and there’s very little warmth with only average bass response. It’s better than your standard alarm clock radio, however. 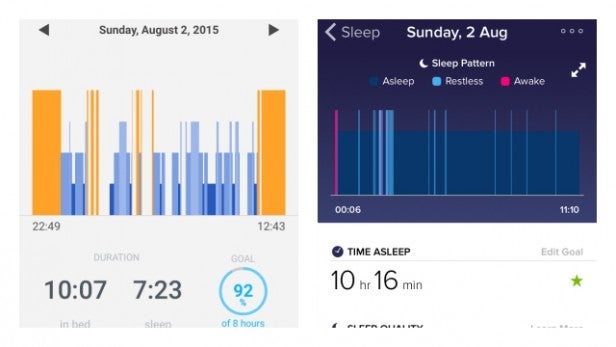 It’s with the analysis of the data collected that I felt most let down by the Aura. It’s suffers from the same issues as many other sleep-monitoring fitness trackers. Accuracy is questionable, inconsistent and simply doesn’t offer any great insight into how you can improve sleep.

The depth of data isn’t actually far off what you achieve with a Fitbit or Misfit activity tracker. Offering even some of the smart-coaching qualities of Jawbone’s ecosystem would have made a difference here.

I put it up against the Fitbit Charge HR and Jawbone UP3 for data accuracy and while heart-rate readings were consistent, sleep logging wasn’t. On occasion, the Aura appeared to suggest that I’d had significantly less sleep than the othertrackers. 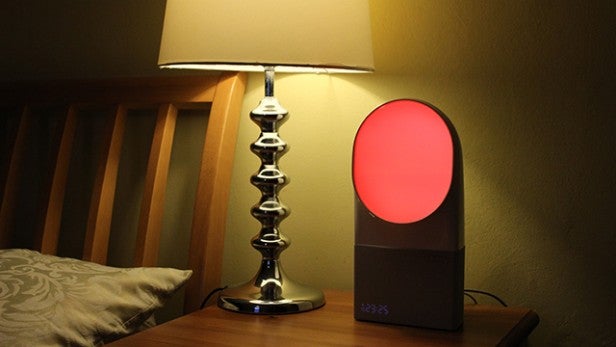 Should I buy the Withings Aura?

Consider the Aura without the sleep sensor and it’s basically a hugely expensive replacement for an alarm clock featuring a lamp. To top it off, that lamp can’t even be used for reading. If it was a smaller unit with a better-sized display, then it would be a more fitting replacement.

On the plus side, however, I found that the sleep and wake-up alarms worked superbly. The question is whether the Aura is really worth the money. If it was significantly cheaper then I’d have no doubt recommending it to those who struggle to get some shut eye.

The sleep sensor, which pushes the price over the £300 mark, isn’t up to scratch when you consider the data it delivers. The inconsistent data tracking is a concern, but it’s making sense of that data that’s most disappointing.

There’s clearly something for Withings to work with here, but right now the Aura is an expensive investment that needs to far more to justify the price.

The Withings Aura is a great way to get a good night’s sleep but it needs to do more with the data analysis to make it worth the money.