What is the Withings Activité Pop?

Wearables are finally edging into the mainstream. With this broadening appeal comes new demands, and fashion-conscious individuals have been leading the charge for more design-led offerings. Fortunately French firm Withings has had its finger on the pulse, following up the high-end Withings Activité activity-tracking watch with this, the more affordable but equally stylish Withings Activité Pop.

More Swatch watch alternative than Rolex replica, the Pop has done away with some of its big brother’s unnecessary luxuries while maintaining the same level of tracking. The result, a £120 watch that’s one of the most well-rounded and visually appealing wearables on the market. 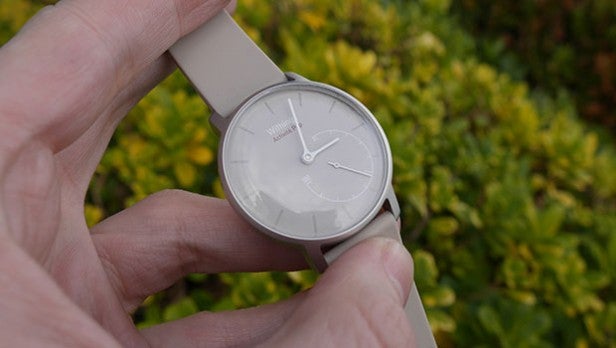 Elegant refinement is the best way to describe the Activité Pop’s design. Built around classic watch styling, this is a device that merges traditional looks with modern abilities. Like its sibling, it has a small additional dial sitting within the watch face. This shows your progression on a 0 to 100% pre-set goal such as step count.

Although the Pop has dropped some of the Activité’s original visual highlights – there’s no calf-leather strap, stainless-steel body or sapphire crystal here – it still looks the part. The machine-milled metal body and rubber straps give the watch a more everyman, everyday look and feel.

This traditional finish also means the awkward associations still surrounding many of the more garish smartwatches are avoided. Instead, you have a look that can comfortably take you from morning meetings to late-night parties – via that lunchtime gym session. With a 33mm-wide case, it’s also one of the first activity tracking watches to be truly accessible to both sexes.

Giving the fashionistas among you some choice, there are three body colours available – black, dark blue and sand. For those with more extravagant tastes, a selection of vibrantly hued additional straps is also available from Withings. If you fancy going off piste, the 18mm strap width is fairly standard, meaning a whole world of aftermarket straps is opened up. 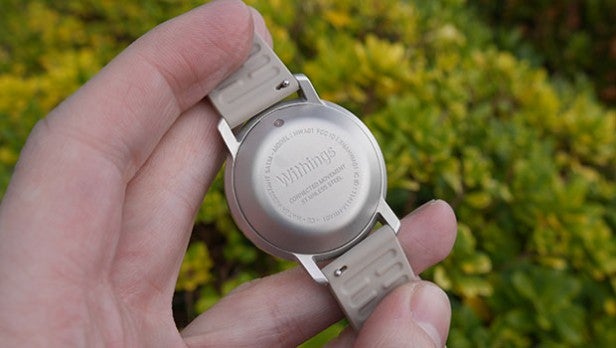 Styling aside, beneath the surface the Pop and the original Activité are the same. Well, almost. While the Pop’s sensor package is identical to the original Activité’s, the actual watch movement has changed. The Activité’s Swiss movement has been replaced by a cheaper Chinese alternative. Prestige aside, this makes no difference. We found timing accuracy to always be on-point, with each smartphone-connected sync ensuring the time is accurate.

As you would expect from any activity tracker worth its weight, the Pop offers the usual collection of data metrics. From walking and running to calorie burn and sleep monitoring, the Withings watch keeps tabs on the lot. Swim tracking has also been promised in a future software updates too, but it’s not quite there yet.

Given its user-tracking innards and Bluetooth 4.0 connectivity options, the Pop’s body is slightly deeper than those of some traditional timepieces. It’s not bulky or unsightly, though. The Moto 360 or LG G Watch R this is not. It sits snugly and comfortably against the wrist. This is easily the best-looking wearable we’ve seen to date.

Battery life is another area where the Pop streaks beyond the competition. Withings has claimed the Pop can keep on tracking for eight months on a single coin cell battery. There are no recharges necessary, no proprietary chargers, no careful battery management, none of the usual fuss that hinders smartwatches.

While we can’t vouch for this eight month claim, after a month’s usage, the Pop is still going strong – a refreshing experience compared with many existing wearables. 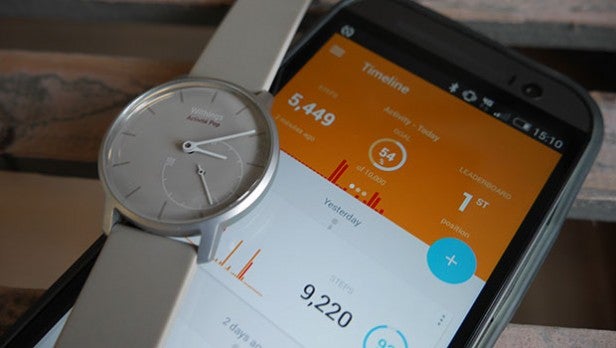 All of this data collection means nothing without a decent accompanying app with metrics that are clear and accessible. Fortunately the Activité Pop has this in the form of the Withings Healthmate app. This is by no means the most detailed or advanced companion app, but it is a strong offering. It makes your step count and walk/run intensity clear through a selection of colour-coded graphs and graphics, but fails to delve much deeper.

The Healthmate app is more analytical than critical. It will breakdown your daily activity, but not offer much guidance on how you can make small changes to get closer to your desired long-term goals. Fall behind your daily targets and notifications will prompt you to keep going.

These might have good intentions but they quickly become repetitive. The more repetitive they feel, the less impact they have. Willpower and personal persistence are still needed here. 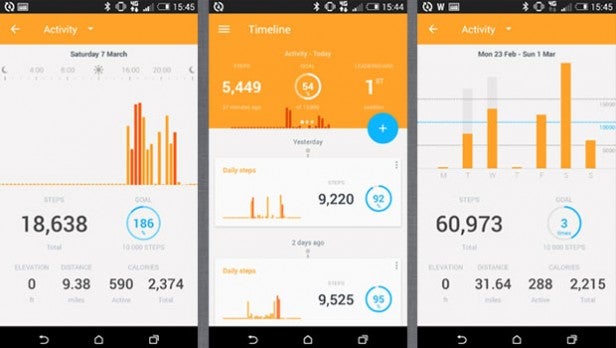 One serious issue I did have with the app is timeouts. If you’ve not synced for a couple of days, screen timeouts can interrupt lengthy syncs. If this happens, data can be lost and never retrieved. Although an infrequent occurrence, this is an issue which needs serious attention.

Background syncing would not only solve this problem but create a far more fluid user experience all round.

Having been restricted to iOS for a number of months, Withings has recently brought Activité support to Android for the first time. Windows Phone is still left out in the cold, but the two leading mobile platforms now offer comparative experiences.

Unfortunately, the Healthmate app only really comes into its own when paired with additional Withings products. Throw a smart scale or blood-pressure monitor into the mix and you quickly get a broader picture of your overall wellbeing. However, Withings can’t expect you to buy all of its products to receive a suitably detailed app experience. 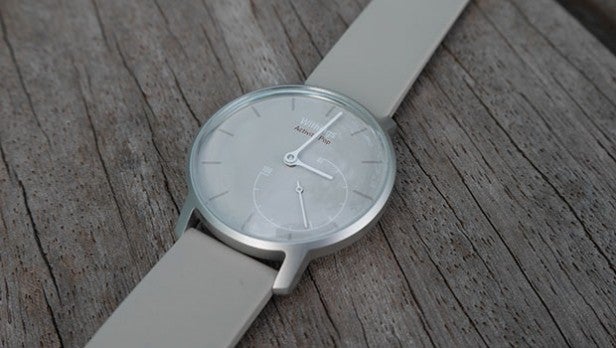 The Activité Pop is by no means a case of style over substance. Yes, it’s the best-looking activity tracker we’ve seen to date, but it backs this up with some of the most accurate, detailed, seamless data capture on the market.

That said, as with too many of its rivals, the Pop’s activity-tracking credentials are far too restricted to basic walking, jogging, running recording. Yes, Withings has promised swim tracking in the near future, but it’s not here yet.

Wearing the watch during a 30-mile cycle did little to bolster our daily activity target. Given that the wearable is wrist based, however, means erroneous recording can be an issue. Wild gesticulation of the hands adds to your steps goal. While clapping along to a gospel choir – yes, really – we added almost 1500 steps to our daily achievements.

Other sure-fire ways to skew your results include simple things such as carrying your shopping or walking with your hand in your pocket. While these can distort the data, we’ve yet to meet a wrist-based activity tracker without similar pitfalls. 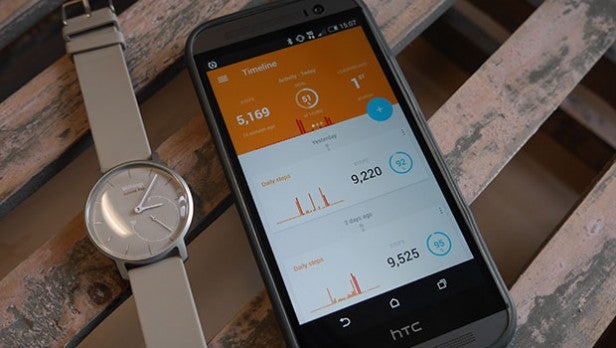 Gripes aside, the Pop is actually one of the more accurate we’ve tested. Where the Misfit Shine is too generous and the Huawei TalkBand B1 extremely stingy, the Pop’s step count was bang on. Counting out 100 steps time and time again, the results were consistent.

Where the Activité Pop comes into its own is its effortless transitions between tasks. Yes, there are many activity trackers that can monitor your sleep cycles as well as your running sessions, but most suffer from the same issue – you have to manually state when you’re going to sleep.

Thankfully the Pop is smarter than this. Unlike the Jawbone UP 24 – another of our favourite activity trackers – the Withings automatically knows when you’re drifting into the land of nod. There’s no button pressing or app alerts required.

While this means those guilty afternoon naps are no longer a secret, it also ensures a more accurate picture of your full daily activity – and inactivity – is captured. Setting your watch aside to take a shower isn’t going to skew your sleep stats; the device is smart enough to distinguish between sleep and inactivity.

Helping you wake up, a vibration-based alarm is built into the device. This could be a little stronger and multiple alarm options would be preferable, but it gets the job done – mostly. 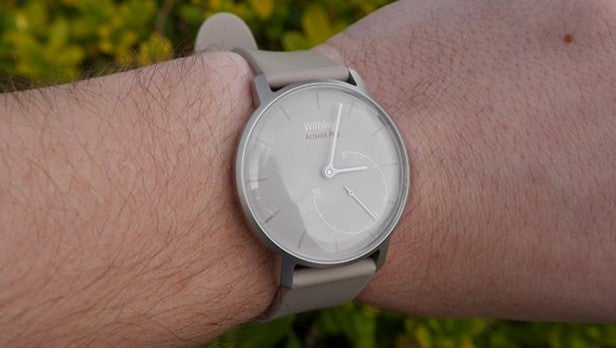 Should I buy the Withings Activité Pop?

Simply put, yes. This is one of our favourite activity trackers so far. It’s not brash in shouting about its smart credentials – but that’s its charm.

The Withings Activité Pop is a wearable for everyone. Stylish enough to pass through a job interview and casual enough to track your session at the gym, it’s a happy medium in an industry of ugly extremes. Unlike many similar devices, the Pop isn’t intimidatingly sporty in appearance.

If you’re after a fashion-led activity tracker, the Withings Activité Pop is hard to overlook. Yes, it might not be quite as droolingly beautiful as its predecessor, but at £120, it will give your wallet far less of a beating. If the Activité is a Tag Heuer or Rolex, the Pop is the ageless, always chic Swatch. 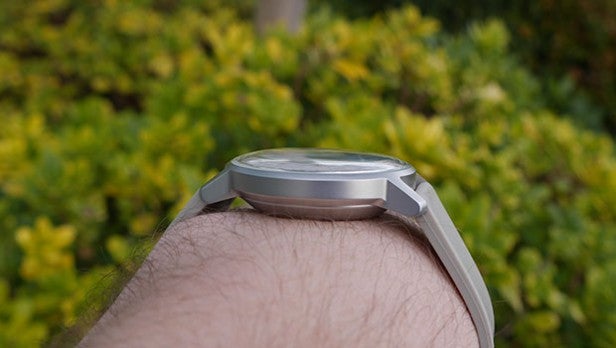 Similarly if you’re after the “true” smartwatch experience with email alerts and remote call handling, you’re better off holding on for the Apple Watch or an Android Wear device.

Ultimately the Pop does what many of its rivals fail to achieve – it integrates seamlessly into every facet of your daily life.

A smarter watch than most smartwatches, the Activité Pop is the ideal activity tracker for those after a balance between performance and visual refinement.