Although Windows Mobile 6.5 will be with us soon, it’s unfortunately not going to be the total user interface overhaul that many people were hoping for. Instead that is now set to happen with the launch of version 7, which is still some way off. This leaves many people still looking for a Windows Mobile shell that will make their device a bit more finger-friendly to use and this is the gap that Winterface hopes to fill.


They say imitation is the sincerest form of flattery and there’s certainly some of it going on here. Once the shell has loaded it becomes pretty obvious that Winterface has borrowed heavily from Apple’s iPhone, but let’s face it, that’s no bad thing. 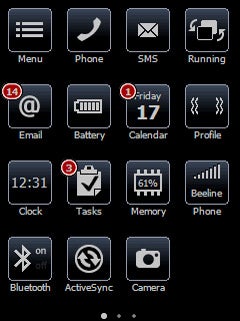 Winterface takes over the entire screen of your device (although you can tweak it to show the Windows Mobile title bar) and presents you with a grid of large icons. There are two default skins included with the software. The first uses a pretty drab looking black and white design, but displays 16 icons per page, while the seconds uses larger, more colourful graphics but is limited to showing nine icons per page. We found the second of these much more pleasant to use. 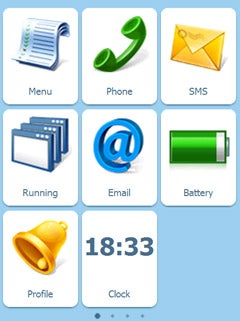 The iPhone influence makes its presence felt in pretty much every aspect of the shell. For example, it uses a similar row of dots at the bottom of the screen to show you which page of icons you’re currently on. However, unlike the iPhone you can’t tap to the left or right of these dots to switch pages, but instead have to move through them by swiping your finger – not a big hassle admittedly. And when you go to wake your device from standby you’ll find that Winterface uses a similar ‘slide to unlock’ mechanism to that employed by Apple. 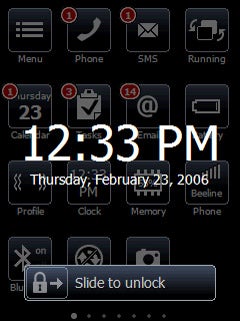 One of the best features of Winterface is that you can add an icon to the grid for pretty much any setting that you need to access on a regular basis. Added icons can be positioned anywhere you like. So you could add the Wi-Fi on/off switch next to the Web Browser or alternatively group it together with other communications icons on a dedicated page that you’ve created. Many other shells place settings controls like these in a sub menu, but Winterface’s approach is faster to use because it usually involves less finger taps. The system is also very flexible because it allows you to create duplicate icons. For example, you can place a Wi-Fi switch next to the browser button, but also add one to a page full of communications related settings.

It’s also easy to move icons around on the screen and between different pages or to delete them. In part this is because it blatantly copies the iPhone approach to icon management. To mange your icons all you have to do is press and hold on one of them. All the icons will then start to jiggle. Once they’re jiggling you can drag them around on the current screen, move them to another screen or delete them by tapping on a red X at the top right hand corner. To finish you just press the centre of the D-pad button and they all settle down again. 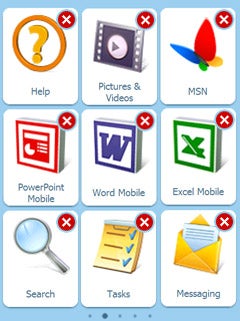 One of the shell’s major strengths is that many of the icons are dynamic. Stuff like battery level, signal strength and calendar date are shown on the actual icon so you can glean the information you need just by glancing at them rather than having to actually tap on them. It also uses an iPhone style number-above-the icon feature to notify you of new emails, new text messages and missed calls. 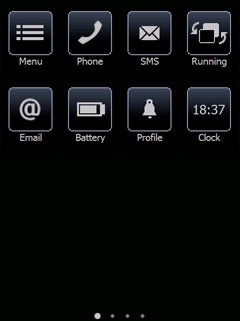 There are plenty of other neat features too. On the first page of icons you’ll find the Running icon that calls up a list of all the applications currently running in memory. There’s a button here to close all running applications or you can tap on a red dot next to each app to close them individually, while actually tapping on the application icon will take you directly to the app. 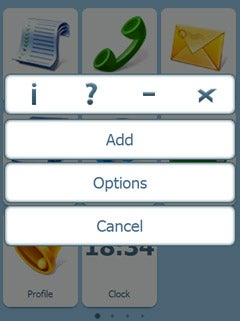 When you’ve got another app loaded you can use Winterface’s own gesture stroke to instantly return to it. All you have to do is draw a rainbow style arc with your thumb across the screen and Winterface will come to the fore again. In our experience the device recognised this gesture about 90 per cent of the time, although there are occasions when it’s impossible to get it to respond. For example, trying to draw it in the grid view in Excel just causes Excel to group select its cells.

We did notice a couple of bugs in the software when it was running on our O2 XDA Zest. The most obvious was to do with the battery icon. Although the main icon did actually dynamically display the remaining battery life, when you tapped on it you were brought to the GSM/3G Networks settings page which is either a bug, or a very strange design decision. 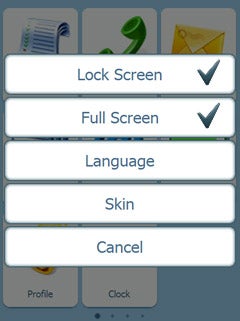 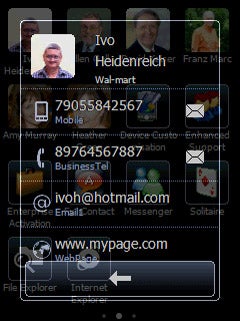 The software is also currently lacking some features, such as the ability to add your own back ground wallpaper, and the weather button currently has to be downloaded separately, perhaps because it seems to put more drain on the device’s battery. We also weren’t overly keen on the way Winterface deals with contacts. It doesn’t have a separate menu for contacts, instead you just add your favourites to the grid view. However, if you need quick access to lots of commonly used contacts this can leave you with a lot of pages of icons to swipe through. 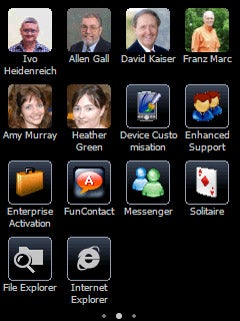 Nevertheless, what Winterface has done well is to present you with an interface that really is very finger-friendly. To the best of its ability it tries to avoid leading you to menus with tiny tick boxes or buttons that are too small to be tapped with a finger. Of course it can’t stop this happening when you actually enter Windows Mobile applications, but everything that is under its control is easily driven with straightforward finger presses.


For the most part Winterface is a speedy replacement for the standard Windows Mobile interface with a good-looking design and a neat iPhone style layout. There are still some bugs to be ironed out in this new version, such as the battery indicator one we came across with the O2 XDA Zest, but to be fair, the software seems to be updated very quickly. Version 1.3 only appeared in February, but already version 1.31 is out. There’s a lot to recommend here, so if your Windows mobile doesn’t come preloaded with a touch style shell, then its definitely worth downloading the 14-day trial of Winterface to see how well it works on your device.