Earlier today, Microsoft unveiled the latest version of its mobile phone operating system, Windows Phone. Arriving in Autumn this year, the new update code named Windows Phone 7 Mango will bring with it over 500 new features, including all essential multi-tasking. We were at the press conference in London to get a closer look at what the new update will offer, so here are our initial thoughts.

We were shown the software running on an unnamed Asus-built demo handset but obviously Microsoft’s big partner for the future is Nokia and indeed the company confirmed it will have handsets available for this launch, but you’ll also see new handsets from existing partners including Samsung, HTC and LG as well as new partners Acer, Fujitsu and ZTE. More importantly, though, the update will be available to all existing handsets for free. This is exactly where the company’s decision to lock down the software – preventing handset manufacturers from meddling with the interface – really pays off. With no custom interfaces, like you get on Android, the update is guaranteed to work. We’ll gloss over the fact it will have taken over a year for this significant update to have arrived though. 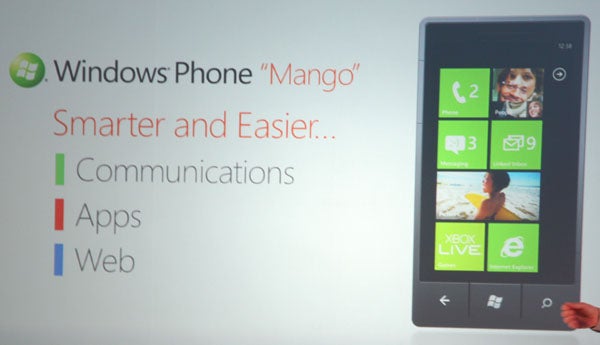 What’s most obvious about this new update, is that not much appears on the surface to have changed. The homescreen is still filled with Live Tiles, while a lot of the interface is still built around the idea of being able to access different modes of an app by swiping left and right. Open the People Hub, for instance, and you’re presented with a list of your contacts but swipe left or right and you’ll see social network updates from your friends or their latest pictures.

The trick is that this same design ethic is encouraged to be used in 3rd party apps, so you get a consistent look and feel. The result is an OS that feels very different to most of the competition yet feels consistent within itself. Not that this is all good. There are definitely still quirks to the interface, like the main menu still being one big long list of apps that will get very long and unwieldy once you’ve downloaded lots of apps, but they’re more things you’d simply have to get used to than constantly get frustrated with long term. 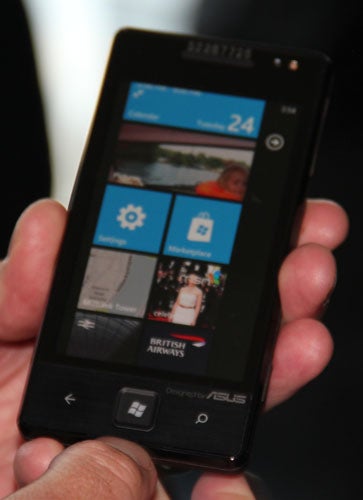 Performance is also impressive. We don’t know what hardware the demo handset was packing but it felt fast. Windows Phone always was a slick and snappy OS but with no multi-tasking and a number of other omissions in the original release, there was always a doubt as to whether that performance would be maintained when it had as many features as Android or iOS. From our brief time with the devices, though, we can confirm that it most certainly can. 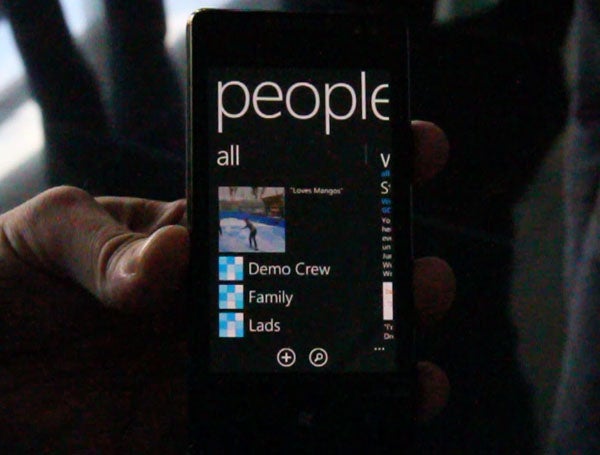 Jumping into some of the new features, the People Hub is home to many of the most significant changes. The first is Groups. This allows you to define groups within your contacts for quickly exchanging messages with large numbers of people. The idea is that if you regularly find yourself spamming your football team buddies, work colleagues or family you no longer need to scrap around double checking you haven’t missed anyone off your CC list. It works a treat with the groups being easy to setup and you can also place Live Tile links to them on the homepage, which will show messages on the tile as they come in.

The service also integrates with Threads, which brings together SMS, IM and Facebook chat into one message stream, allowing you to seamlessly switch from one service to the next, if it’s more convenient. The service will monitor your contacts so it should always know which is the best way to get hold of someone. Frankly, this is the way communication is going and it can’t happen fast enough, so we’re glad to see Microsoft leading the charge with such a slick implementation. 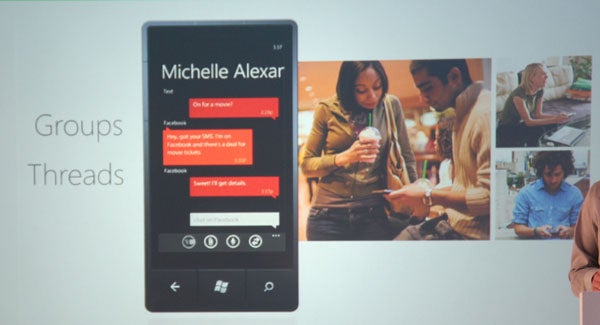 Also new to the general category of contacts and socialising is the ability to add in linkedin and twitter to the People Hub, pulling information and messages from those services into your contacts’ profiles. Pictures can also now be shown – simply swipe left or right from your contact’s profile and it will show their pictures.

Email has been enhance with the addition of a conversation-style layout, just like SMS are on many phones. Along with Threads, this makes it really easy to keep track of all the messages you’ve exchanged with someone. 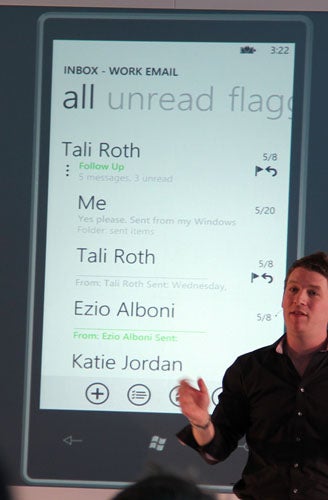 Meanwhile the calendar further emphasises the Windows Phone philosophy of integration, with support for Facebook events. Simply pop into the calendar app and it will show your Facebook happenings just like they were any other calendar event – it will even notify you if two events clash, which is a mighty useful tool. 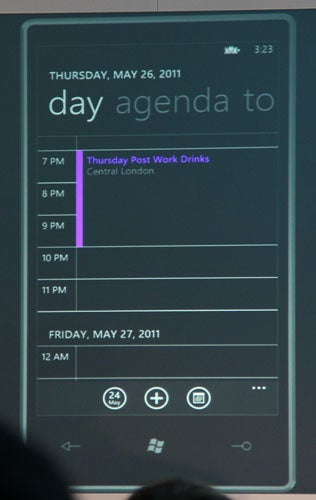 One more thing on the socialising front; if you’re listening to music on a headset, you can have messages read out to you and dictate a reply all through voice commands. We didn’t have a chance to give this much of a try but the demo was impressive.

All told, Microsoft has created undoubtedly the most integrated, slickly presented set of tools for keeping in touch with your friends and organising your social life that we’ve yet seen on a phone. We haven’t yet had time to ferret out any foibles in the new features but thus far, consider us impressed. 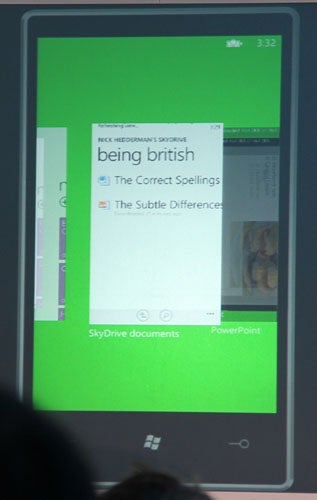 Multi-tasking is probably the single biggest addition to Windows Phone Mango. The inability to quickly swap between apps on the original version of the OS was a shocking omission when it launched so it’s good to see it finally implemented. As with the iPhone, among others, it isn’t ‘true’ multi-tasking whereby to apps fully run simultaneously. Instead it pauses background apps, ready for them to leap back to life in an instant.

To bring up the multi-tasking view, you just hold down the Back button and you’re presented with a carousel of large thumbnails, which you simply tap on to bring full screen. It’s nothing new but it’s neatly done, and certainly beats the iPhone and Android implementations.

Apps in general are set to improve too thanks to the opening up of the Windows Phone API. Now apps will be able to send updates to Live Tiles, pull information from contacts or calendars, and of course maintain that swipey navigation style. 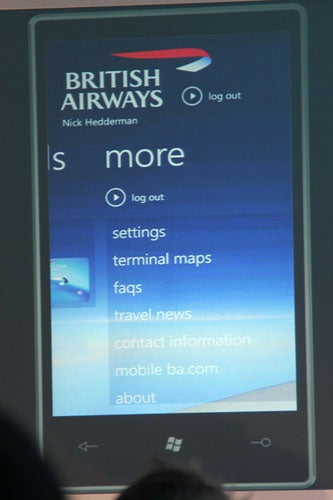 One such example is the upcoming British Airways app. This allows you to book your flight, choose your seat – through a very slick 3D interface, and find out where your terminal is. But not only that, you will get a pop-up to tell you that check-in is now available, and once checked-in you can pin your boarding pass to a Live Tile, which is locally stored so will work even without a data connection. The Live Tile will even flip round intermittently, showing the QR code for your ticket. Very neat! 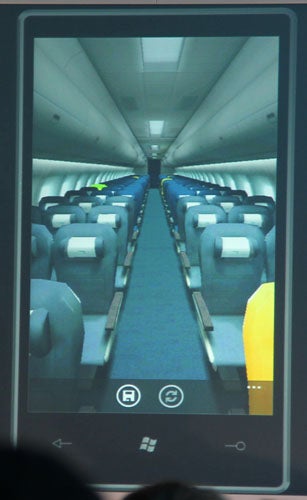 With 18,000 apps already available for Windows Phone, Microsoft is already nipping at the heels of the other smaller smartphone players and it seems like it won’t be long before it’s comfortably in third spot. What’s more, the overall quality of apps seems to be good, with Microsoft obviously able to drag developers onboard quicker than all but Apple.

Search has also seen a big improvement with the addition of Bing Vision and Bing Music. The former uses the phone’s camera to identify products via bar codes or simply image matching to then bring up information about the item – we were shown the example of a book. Bing Music, meanwhile provides a one stop means of finding out what music is playing, just like Shazam. Both a not new but the fact that they’re available at the touch of a button – the Search button – is a real boon to usability. 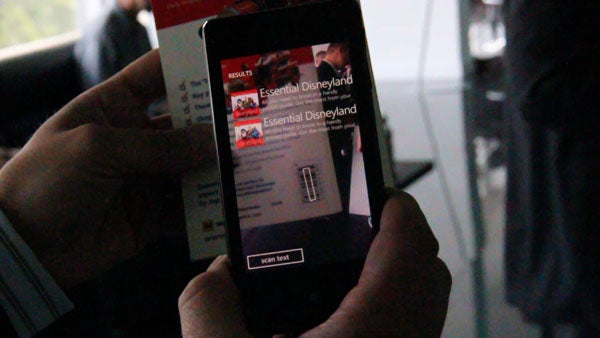 Normal search is also enhanced by location data, giving you instant access to a whole load of locality based searches just from one search word. Search for ‘coffee’ and it’ll tell you about coffee, show you where the nearest coffee house is, 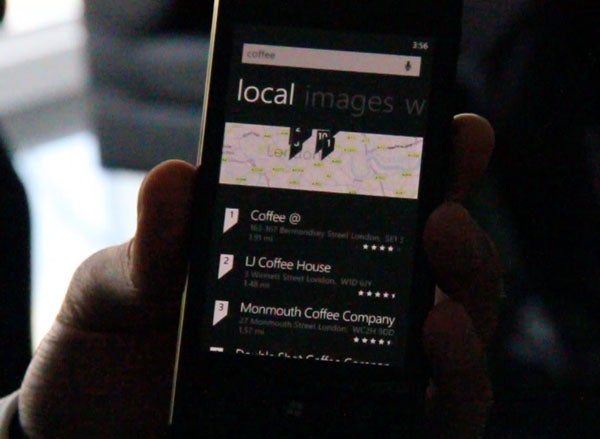 Microsoft made a big song and dance about IE9 being on Windows Phone Mango, claiming it was exactly the same code as on the desktop version of the browser. This it demonstrated by showing how fast it was at rendering an HTML5 test, as compared to an iPhone 4. However, while it did seemed fast, Microsoft failed to mention the lack of Adobe Flash support and was reticent to explain its absence.

The other big hitters of Windows Phone, Office and Xbox, didn’t have much in the way of big updates except Office now has integrated SkyDrive support, allowing you to edit documents stored in the mystical magical cloud! Excel can now handle formulas as well, while PowerPoint better shows full slideshow animations.

So, Windows Phone 7 Mango is not a complete reworking and there aren’t that many headline grabbing features that are things the OS should have had long ago. The wacky interface that takes some getting used to is also just as in your face as before. What’s more, some of the shiniest gems are only available if you jump head first into the Microsoft eco-system, which many don’t want to do. However, the combined small improvements, along with Windows Phone’s already very slick, heavily integrated interface make for a phone OS that feels like it’s particularly suited to the way most people use their phones nowadays. iOS, and even Android, may have a simpler approach on the surface but get to learn it and we suspect Windows Phone may prove a better experience for many.