Editor’s Note: Windows Mixed Reality is still very new and most of its key features haven’t launched, so we’re holding off giving it a final score. Below you can see our impressions of the platform in its current state at the time of writing.

What is Windows Mixed Reality?

Windows Mixed Reality is Microsoft’s pitch to take virtual and augmented reality to the masses. It uses the groundwork laid by the HTC Vive and Oculus Rift in the world of gaming to build a foundation for an all-encompassing platform with lower hardware requirements and a more diverse application library. It offers everything from zombie slaying and video entertainment to enterprise-level software and productivity apps.

With significantly cheaper hardware, lower system requirements and a shed load of big-name hardware vendors, including Acer, Dell, Lenovo and Asus, already making headsets, the platform is off to a solid start.

But, sadly, a swarm of bugs and teething issues with the Windows 10 Creators Edition Mixed Reality software and user interface mean it still feels more like a work in progress than a finished platform. 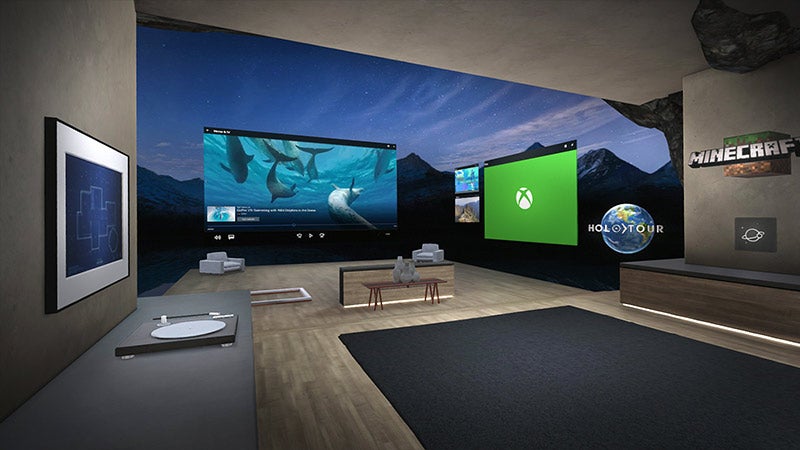 The big selling point for Windows Mixed Reality is that it has significantly lower system requirements than both the Oculus and Vive, and will run on systems with integrated graphics.

This is impressive, but before you get too excited, this doesn’t mean you’ll be able to play Space Pirate Trainer or Arizona Sunrise on your Surface Pro. Windows Mixed Reality is actually split into two tiers that will both offer very different experiences and come with their own set of recommended specs.

You can see the specific system requirements for the two tiers in the table below.

This may not sound like a big deal – after all, every gamer knows 60fps is the benchmark, right? But in VR it’s a serious differentiator, as many experiences, especially those with movement, will make you feel nauseous when running at 60fps. Testing the platform using the Acer Headset and an i5-powered Acer Switch 5, I only made it 20 minutes in before feeling a little ill doing anything but stationary tasks, such as Edge web browsing and watching videos in Little Star VR Cinema.

The good news is that the system requirements are still significantly lower than those of the Oculus and Vive, which require an Nvidia GeForce GTX 970 or newer GPU. This means you’ll be able to run it off most modern Ultrabooks and mid-range gaming laptops, like the £880 HP Omen 15, and still enjoy significantly smoother and less nauseous VR experiences at the hallowed 90fps.

Microsoft’s also worked to make it easier to get into Mixed Reality/VR by releasing a reference headset and motion controller design to hardware manufactures. The design features lower-cost parts and a significantly easier setup process than the Vive and Oculus.

I reviewed the platform using the Acer Headset, though from what I saw testing the other headsets at IFA 2017, the differences between them are minimal. Every headset closely follows Microsoft’s reference design, and as a result have close-to identical specifications. They feature dual 2880 x 1440 LCDs with a 90Hz refresh rate and 105-degree field of view. The only difference I’ve noticed between each headset thus far is the shape of the plastic molding used. 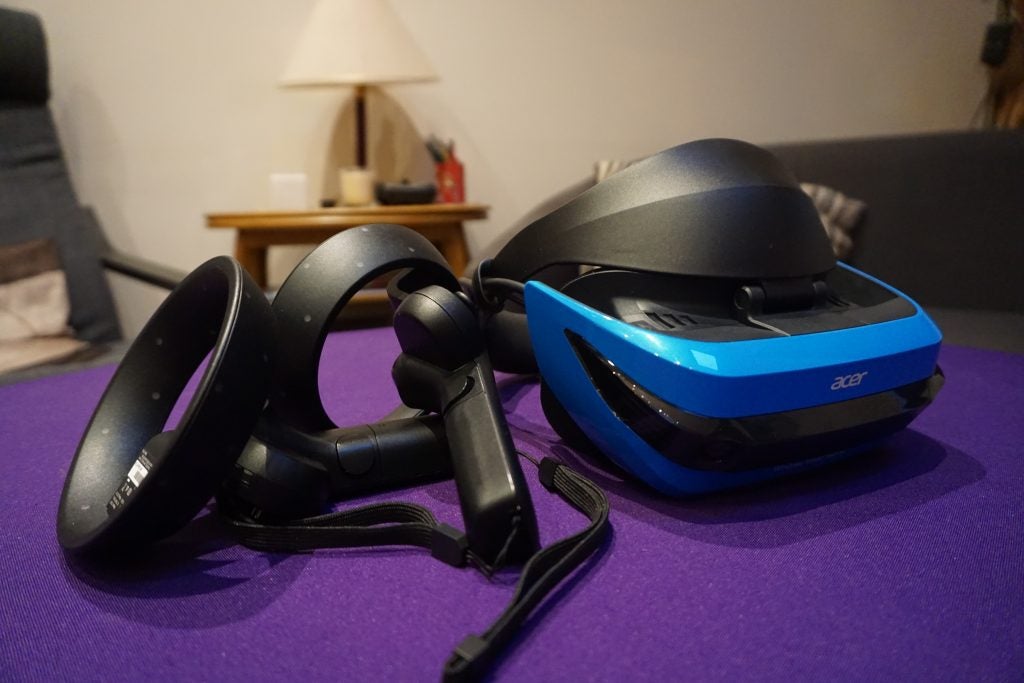 The lack of changes is both a blessing and a curse as, while generally great, the hardware does have some minor issues.

Starting with the positives… The headsets are blissfully easy to set up. Unlike the Oculus and Vive, Windows Mixed Reality headsets don’t require external sensors to work. Instead they utilise two front-facing cameras and IME sensors in the headset and controllers. The front cameras are used to scan the area around the wearer and then use the algorithms Microsoft originally created for HoloLens for location locking and positional tracking.

In theory this should offer a variety of benefits. The setup should stop you from ever hitting a sensor black-spot when in VR, which was a common occurrence on the Oculus without a third rear-facing tracker.

The tech also reduces the number of ports the headsets use up. Testing the platform, I simply plugged the headset’s single HDMI and USB 3.0 cables into their relevant ports on the Acer Predator 17 I was using, put batteries into the motion controls and followed a series of on-screen prompts to pair the controllers and set my play/work area up. (If space is an issue you can also set it up to work in a seated position, but this will reduce the number of apps you can use.) The entire process took minutes and made the faff I had getting the Oculus set up, positioning and repositioning external sensors, feel like a Herculean task by comparison.

The motion control reference design is also pretty great The design’s clearly influenced by the Oculus Touch, which in my mind are the best motion controllers on the market. On the front you’ll find traditional joystick inputs plus a circular touchpad, which is designed to help you with more precise movements, like using a cursor in the Edge web browser’s VR mode and a central contextual menu button.

On the front and side you’ll find physical buttons that naturally sit where your index and middle fingers fall. These work the same way as their equivalents on the Oculus Touch, acting as your primary interaction buttons. Squeezing the side-facing button will grab items in most games, for example.

While this is great, there are a few issues with the hardware. For starters, the headsets don’t come with built-in audio. Unless you want to use your laptop or desktop’s speakers, you’ll have to attach your own headphones and mics using a 3.5mm port. It sounds like a small issue, but the Acer Headset didn’t feel like it was built to work with over-ear headphones. I couldn’t get a comfortable fit with my Sennheiser Momentum 2.0 or SteelSeries Siberia 840, no matter how much I fiddled, and was eventually forced to use in-ear headphones instead.

The use of LCD rather than OLED panels, like the ones seen on the Oculus, also came with some trade-offs. The enhanced resolution made VR experiences a little smoother, but colours didn’t appear quite as vibrant, especially when playing games like Space Pirate Trainer. I also noticed a minor screendoor effect  (where you can see gaps between pixels) when concentrating on particular parts of experiences. This is a problem on all VR headsets at the moment, but felt a little more pronounced on Acer’s than it did on the Oculus I had to hand. 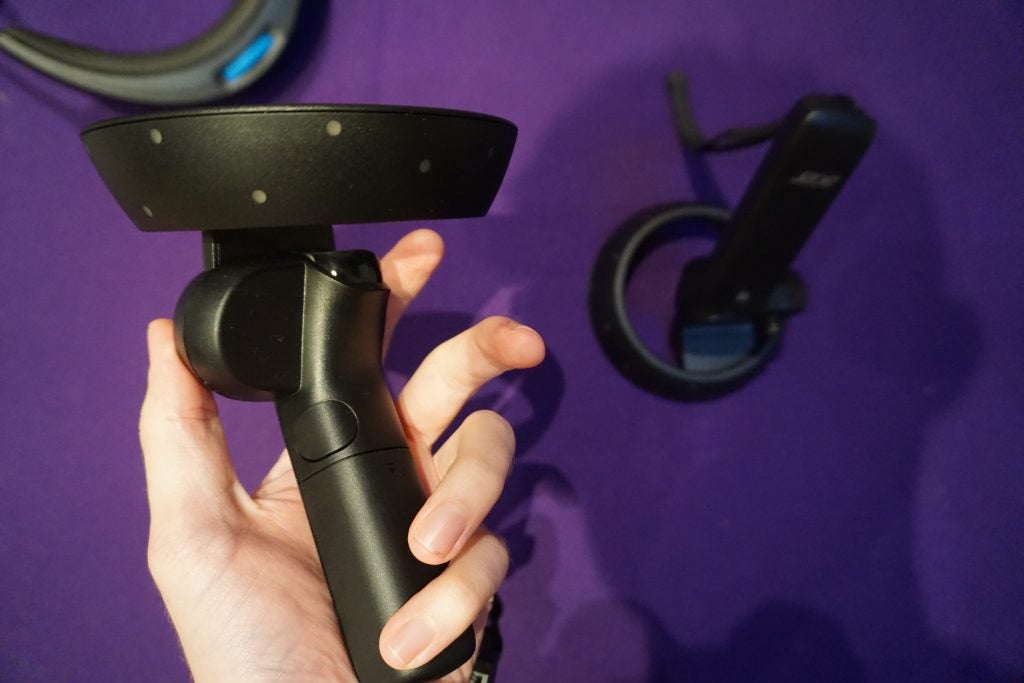 I’m not completely sold on Window’s Mixed Reality’s user interface. Put on the VR headset and you’ll be dropped in a fake house-style environment with various hubs displayed as screens/windows on walls.

The environment is entirely customisable and lets you pin specific apps and services wherever you like, using motion controls, an Xbox gamepad or traditional keyboard and mouse.

The idea is that you can create windows for applications, and float them in any position or at any angle you like, creating a virtual Minority Report-style experience. This sounds great – after all, how cool would it be to be taking a Skype call in virtual reality, where you can and drag and drop whatever app you need around you to get the info you need? But in practice I found the experience fairly jarring, particularly when using motion controls. 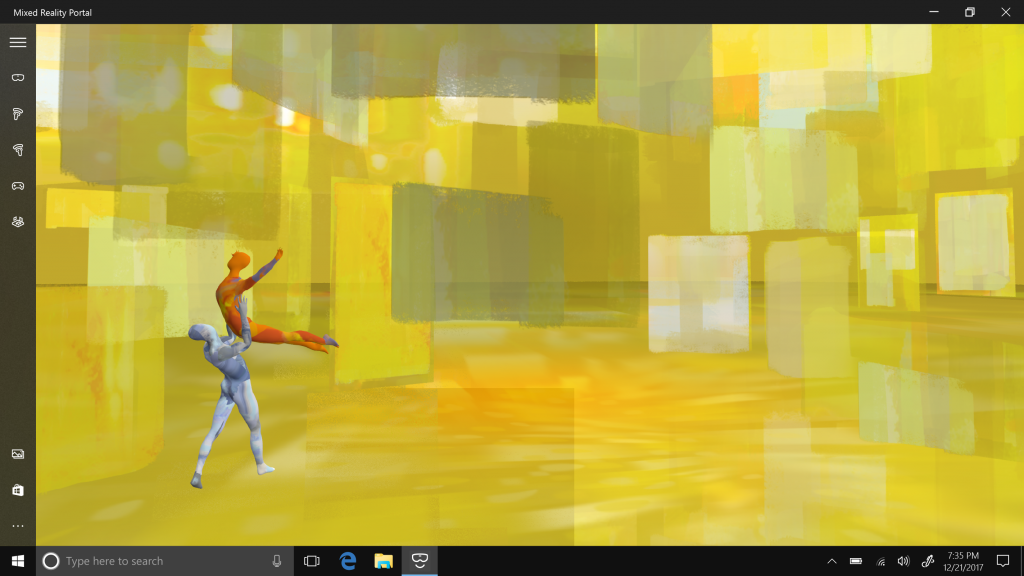 Moving around the home worked well enough with Windows Mixed Reality using a similar teleport system to first-person VR shooters, like Robo Recall. Specifically, you teleport around the virtual home using the controllers’ joysticks to select your location and orientation.

Things get a little more fiddly when you try to actually interact with applications, however. The controller’s tracking is generally fine, but the size of shortcut icons to resize open app windows is too small and generally fiddly to hit. I also found the interface had an annoying habit of misreading some commands. On numerous occasions I’d accidentally adjust the angle as well as the position of open windows when trying to move them, leading to a frustrating process of trial and error, with me flailing my hands about in the vague hope they’d return to a readable state.

Things aren’t quite so problematic with a regular mouse and keyboard, but I can’t help but think the interface could do with a bit more optimisation.

As it is I found myself generally ignoring the house and using the inbuilt Start menu, which pulls up a tiled interface similar to Windows 10’s regular UI with pinned apps, or shouting at Cortana to get the service I wanted.

The app store also feels very much like a work in progress. As it stands, outside of Microsoft’s own services, the app offering is limited to games that are already out on the Vive and Oculus stores, including Superhot VR, Arizona Sunshine and Space Pirate Trainer, a few VR media players and a handful of “experiences” apps.

The apps all work well enough, though controller tracking in games can occasionally go a bit haywire, but there’s a noticeable lack of exclusive content to make you choose Windows Mixed Reality over the Oculus or Vive platforms at the moment.

Fortunately, the platform’s games offering is set to get improved in the future, thanks to the addition of Steam VR support.

The Steam VR library is currently the most robust around and, given the general store’s dominance in the PC market, will be a huge boost for Windows Mixed Reality when it finally arrives.

Sadly there’s no firm info when the support will be added outside of Steam rolling out a “preview” for developers “this holiday season”. 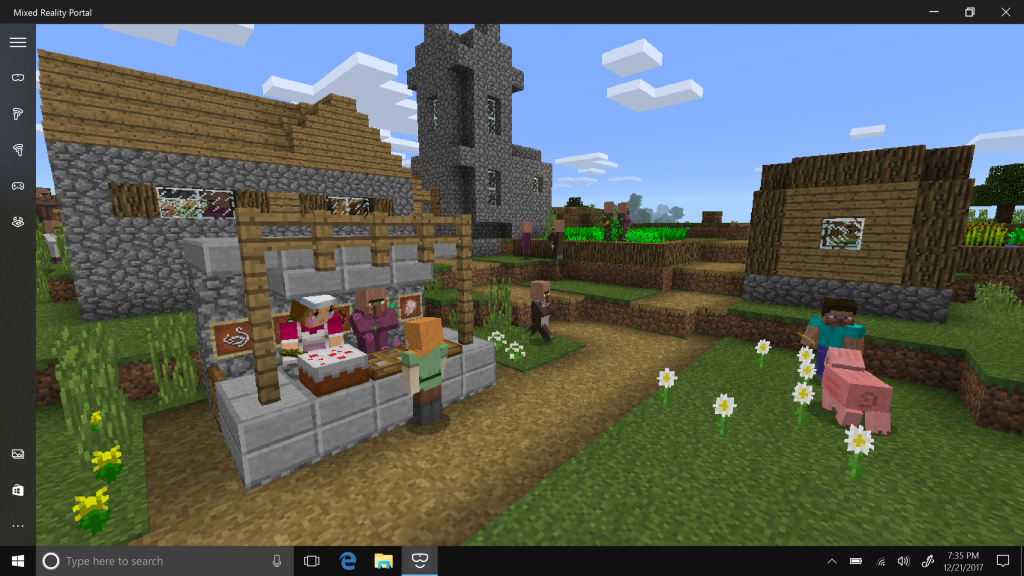 Why buy into Windows Mixed Reality?

Windows Mixed Reality is still in its very early stages at the moment, featuring a number of tracking bugs and a generally unpolished UI. It’s very difficult currently to recommend that anyone but developers and serious enthusiasts should invest in one of these headsets.

The platform definitely has promise, though. The low entry cost compared to the Vive and Rift, and the promise of more productivity, not entertainment, applications make it a very different product and platform to HTC and Oculus’ offerings. The early support from big-name PC vendors and confirmed Steam VR support in the near future are also very positive signs.

Hopefully Microsoft will continue polishing the platform and bring Windows Mixed Reality’s promise to fruition sooner rather than later.