Exclusive to PC
Confidence: it’s the thing that strikes us most about WildStar, and in many ways the game’s biggest strength. Here’s an MMO that’s going up against World of Warcraft, Guild Wars 2 and The Elder Scrolls Online. It doesn’t have a huge brand behind it, and only a modest hype-machine. What’s more, it’s a subscription MMO coming out at a time when subscription MMORPGs seem to be struggling. You only have to look at what happened to such much-vaunted contenders as Star Wars: The Old Republic or The Secret World.

Yet WildStar comes positively bounding into the fray. It knows what it is, who it’s for, and where its strengths are. It isn’t working overtime to try and fix what’s wrong with the MMORPG, or trying to push some kind of grand narrative vision. Instead, it’s focused on doing what MMORPGs already do best, just doing it that little bit better, with a few twists on the side.

It’s hard to discuss any new MMORPG without mentioning World of Warcraft, and WildStar doesn’t make that task any easier. While WildStar’s vibrant cartoon visuals are more lushly lit and beautifully detailed than those of Blizzard’s aging behemoth, they’re still clearly indebted to them, and the overall look and feel is very WoW.

The same goes for the basic premise, which pits plucky renegades against an authoritarian Dominion on a distant world, and for the way it mixes distinct and unusual races with a solid range of classes. Even the text and icons have a WoW-esque feel. 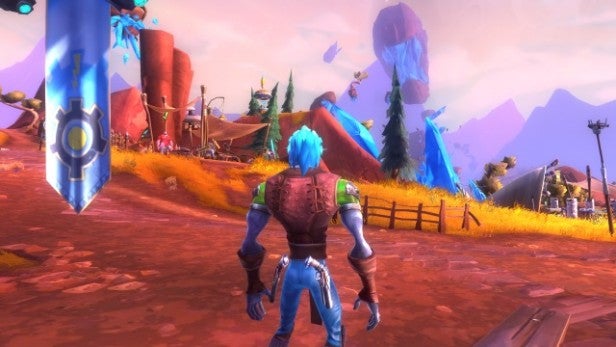 In fact, it’s a bit of a genre mash-up, mixing space opera, fantasy and Western tropes, like a bizarre mix of Star Wars, Joss Whedon’s Firefly, Tolkien and WoW. You’ll also find odd influences from the gaming world. It’s not every MMO that has us thinking of Guild Wars one minute, then Fable, then Jak and Daxter or Ratchet and Clank the next, but somehow WildStar manages to do it.

It partly comes down to the races. As well as the human races, you’ll find the decomposing zombie/dark-elf Mordesh, hulking rock-skinned warriors and diminutive forest-dwellers, not to mention evil mechanoids, orc-like savages and the Chua – technologically advanced and inventive critters that resemble scrappy sci-fi Chihuahuas. The mix of characters and weird sci-fantasy settings give the game a very different feel. It’s also a question of gameplay. We can’t remember another MMO where platforming – honest to goodness platforming, complete with double jumps – has had such a major role.

It might also come down to humour. The big post-WoW MMOs have been a pretty po-faced bunch, too caught up in big cinematic narratives to stop and have a laugh. From its sardonic automated respawn points to the dialogue outlaw varmints spout as they go down, this isn’t a game that takes itself too seriously. It has its share of lore and high adventure, but it’s not afraid to be ridiculous as well. 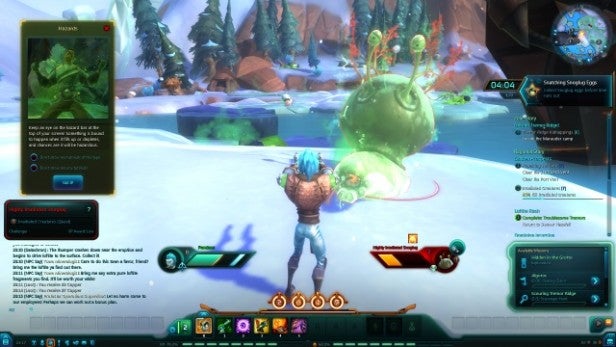 It’s not all WoW in space. For a start, WildStar takes a different approach to character progression, thanks to its concept of paths. As well as deciding on a race, gender and class, you can opt to take your new hero down one of four paths; the soldier, the scientist, the settler and the explorer. There’s a level structure and skill tree relevant to your class, but also levels, skills and abilities that come with your path, not to mention a distinct set of path-focused missions for each and every area.

The soldier, for example, might take on more traditional combat and rescue missions, while the explorer has scavenger hunts to complete or high viewpoints to reach, where he or she might set up surveillance posts or beacons. In this way, paths effectively give you a way of gaining experience and developing your character outside of the core, more combat-based missions, so that those of us who prefer to venture off the beaten track, spend our time exploring the background lore or setting up buildings and support facilities get rewarded for our efforts.

Not that the combat itself is uninteresting. WildStar’s biggest innovation is that it’s found a halfway house between the straightforward hotkey mashing of most WoW/EverQuest clones and a more action-oriented approach. For a start, you’re expected to aim, though this only goes as far as mousing over and highlighting enemies within a fairly broad arc of fire (which depends from weapon to weapon and attack to attack). What’s more, attacks that need to charge are telegraphed, meaning you get a visual indicator of the area of effect and the timing of the incoming blow. This gives you a little wiggle room to evade, using dash moves to escape quickly from the circle, while doing your best to keep the enemy in your sights. 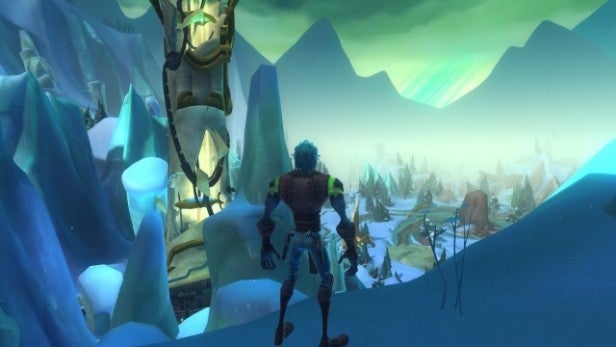 This makes combat a lot more engaging on a minute-to-minute level. Sit there and pound away at your hotkeys and you’ll fall prey to swarming enemies, big hitters or ranged attacks. Keep moving, control the crowds and keep large enemies at bay and everything gets so much easier. It doesn’t turn WildStar into an action RPG, but it does make the fighting much more satisfying.

For a long while, it’s hard to spot any major weaknesses. It looks great, the voicework, while not as all-pervasive as in The Elder Scrolls Online, is big and enthusiastic, and the music has the kind of epic western twang that fans of StarCraft will know well. It’s mechanically very solid, and everywhere you look there are nice ideas, like the way the game puts most key information on the screen, the way it handles transitions between areas, the indicators that point you towards the next objective, and the way you can finish a quest without trekking back to the quest-giver, using a handy comms device.

And pretty much everything you might want in an MMO is here, whether that’s guilds, dungeons, raids, salvage and crafting or the option to solo your way through vast chunks of the game. It’s a fine MMORPG for group play, but you’re not penalised if you like to fight alone, or if you prefer to slip in and out of ad-hoc groups. You’ll need to team up to tackle raids and dungeons (Adventures in WildStar parlance), but even here there are strong grouping tools to help you get stuck in. 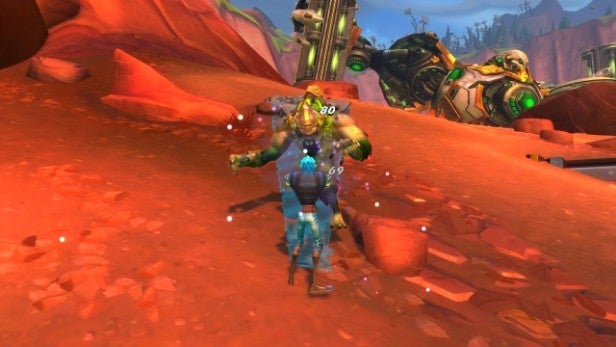 So far so good then. Actually, there are only two things holding WildStar back. One is that this is a big, complex MMO with an awful lot of systems, and while there are plenty of tutorials and a decent in-game health system, you’re still left feeling a bit unsure as to how some of them work. It’s a very accessible MMO, but it’s going to be a tough one to master.

The other is the actual quest design. Basically, the vast majority of the mainstream, non-Path specific quests seem to involve going to an area, killing x numbers of this and possibly y numbers of that, then interacting with some props before making your way back. It’s the kind of stuff you’ll remember from World of Warcraft, and quite possibly EverQuest before that.

On the one hand, this isn’t a disaster. The quests are fairly quick to complete and you can chain one after the other, so there’s plenty of uptime of the killing and looting variety, and precious little downtime of the wandering aimlessly or backtracking sort. Yet put a few hours in over an evening and there is a little grind. One bunch of slavers feels much like the last bunch of marauders, and you begin to wonder what you’re doing with your time. 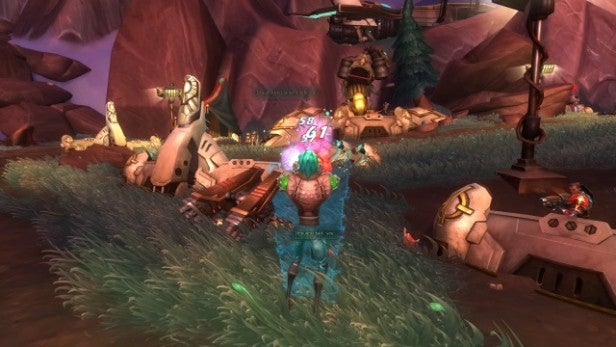 There are exceptions, where you’ll be tasked with defending an area or searching out a character, and the path quests add variety. All the same, this repetition can be a shock after the more sophisticated, narrative-led quests of The Elder Scrolls Online, Guild Wars 2 or Star Wars: The Old Republic.

Does it matter? Probably not. You get the feeling that Carbine isn’t particularly interested in telling epic stories, but in making an MMO that’s full of the kind of stuff that MMO-fans love, and one that might be able to drag in some of the people who came in with World of Warcraft, but haven’t found anything else with the same appeal. 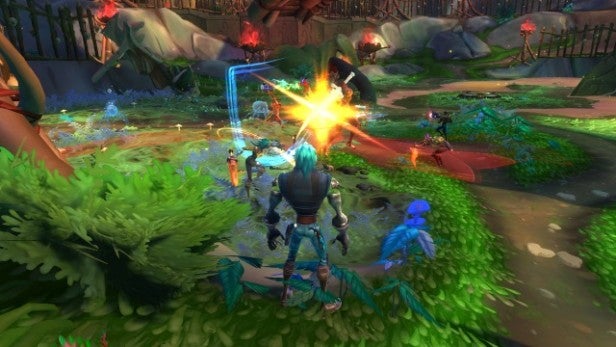 There’s also an awful lot of content here. So far we’re just getting started with one character from one faction on one path, and – as with WoW – a different build will mean a fundamentally different experience. We’ve barely got to grips with the PvP stuff, though the small-scale competitions we’ve played have been a lot of frantic fun. The good news is that from everything we’ve seen so far, WildStar is exciting, engaging and hugely compulsive, with the kind of hooks that should drag any reasonably keen MMO player in and keep them stick. That’s important for a subscription MMO, but then WildStar’s other great innovation is that you might not even need to subscribe.

You see, the game has a secondary currency – C.R.E.D.D. – which you can buy from other players in the game via the Commodities exchange. C.R.E.D.D. can be used instead of real-world cash to buy the next month’s time, giving time-rich, cash-poor players a way of playing without an ongoing investment, while other players can simply keep coughing up. We’ll be interested to see how well this works in the months to come.

Verdict
It’s early days, but WildStar has a lot of potential. It’s focused on doing what MMO fans know and love about the genre that little bit better, and it has a lot of the excitement of World of Warcraft’s early days. Quests are the game’s biggest weakness – a little more thought and variety wouldn’t hurt – but there’s enough interest in the game’s clever Path missions and structure to compensate for that. If you love MMOs, you’ll probably like WildStar. If you’re a recovering WoW addict, this might be the last thing that you need.