By now, one thing is clear: whether you like what Nintendo has done to the games industry or not, whether you think Wii is a novelty or not, Nintendo knows what it’s doing with mass market games. After the intriguing but ultimately disappointing blip that was Wii Music, Wii Sports Resort is an unqualified return to form. As a showcase for Wii MotionPlus, it’s every bit as effective as Tiger Woods 10 or Virtua Tennis 2009.


While still far from flawless, and still subject to the criticisms that have dogged nearly every major Wii release, it’s a game that will reassure those who were getting board of the Wii, and inspire a new wave of punters to buy one. This is the second coming of Wii Sports, and it improves on the first one on nearly every count. 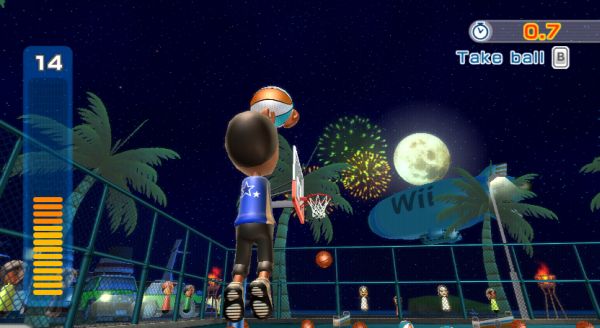 Of course, you could be miserable and dismiss Nintendo’s latest as another lazy hodge-podge collection of sports-themed mini-games. Maybe you hate puppies, sneer at pop music and spend your spare time bemoaning adults who would rather watch Harry Potter than the new Lars Von Trier. Well, maybe you’re right, but, if so, then at least Wii Sports Resort has a lot of mini-games, nearly all of them work, and the best can keep you entertained for ages.


What’s more, Wii Sports Resort does at least make some attempt to tie it all together, with the idea being that the game is a holiday island – a polished version of Wii Fit’s WuHu island – where your Miis can enjoy a selection of sports activities.


Whereas Wii Sports had just five – tennis, baseball, bowling, boxing and golf – Wii Sports Resort has a total of twelve, namely Swordplay, Frisbee, Table Tennis, Basketball, Golf, Bowling, Wakeboarding, Archery, Cycling, Canoeing, Air Sports and Power Cruising. In addition, many of these activities are made up of multiple games. Frisbee for example , gives us a cheerful disc-throwing tournament where you get points for hitting targets and popping balloons, but also a version of Frisbee golf. In terms of mini-games for money, Wii Sports Resort gets a stonking score for value. 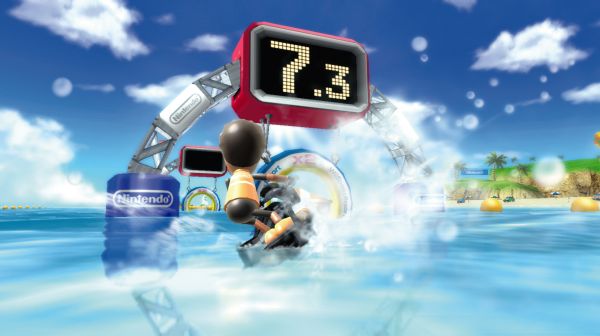 All the mini-games make use, to some extent, of the improved accuracy and more responsive feel of the new MotionPlus-equipped remote (one MotionPlus dongle is usefully bundled with the game). Activities like Swordplay, Golf and Table Tennis immediately benefit. There’s a new sense of precision to your swing in golf, and more opportunity to add snap and spin to your forehand and backhand shots in table tennis.


Swordplay knocks any previous Wii duelling options aside, MotionPlus translating swings of the remote into overhead, sideways and diagonal slashes with, well, maybe not quite 1:1 accuracy, but certainly something close.


Frisbee, meanwhile, seems incredibly responsive to every movement of the arm, the exact position and alignment of the remote and every flick of the wrist you take before throwing. It’s far easier and more intuitive to add spin to the ball in Bowling than it was in Wii Sports, while shooting hoops in Basketball is about as lifelike as it’s going to get when you’re pretending to throw a small chunk of rubber-clad plastic instead of a hefty, half-kilo ball. 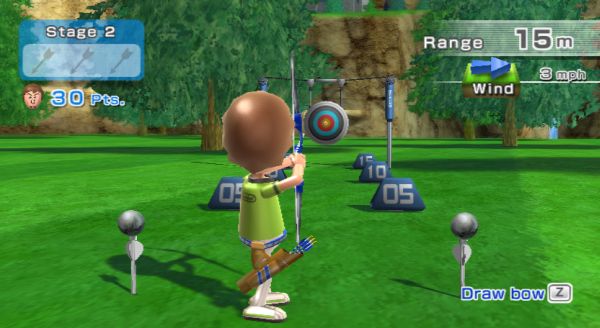 Not that Nintendo has shied away from more complex controls. Archery, for instance, expects you to hold the remote in your left hand like a bow, then simulate the pulling back of the string with the nunchuck and the Z button, before steadying the remote to aim and releasing the Z button to fire. It sounds tricky, but you’ll pick it up fairly quickly, and once you do you’ll notice how much more satisfying a game of Archery this is than the equivalent in Zelda: Twilight Princess. There’s no lag, no weird aiming and no judder. You pull, you aim, you fire. 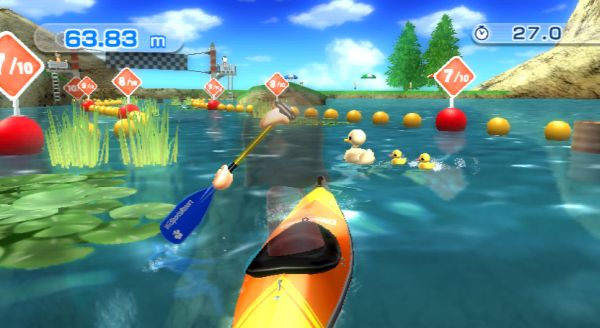 Still, as in Wii Sports, Nintendo has mostly focused on ‘everyone can play’ accessibility over accurate simulation. Swordplay isn’t fencing or kendo, but a Gladiators style knockabout competition where you essentially hack at your opponent, occasionally blocking, until one of you tumbles from a platform into the sea.


Golf now has eighteen holes and an improved putting system, but it’s still all about fantasy scenery and the simple pleasures of a well-hit drive or jammy putt, not repeating Stewart Cink’s win at the Open. Unlock the 3-on-3 basketball mode, and you get a nice, streamlined take on basketball, complete with passes, blocks and tackles, but nothing with the depth of NBA Street.


Wakeboarding, with you tilting the remote to shift left and right and jerking it up when you hit the wake to pull off stunts, might not have the sophistication of an SSX or Tony Hawks, but there’s enough skill and timing to keep it interesting, and enough luck to make it unpredictable.


The key things are that these are all games you can enjoy playing with mates, girlfriends, mums, dads, grandparents and eight-year-old cousins, and that the hit rate is higher than in Wii Sports, where Boxing and Baseball were slightly duff. This is Nintendo’s best and most consistent compilation yet. 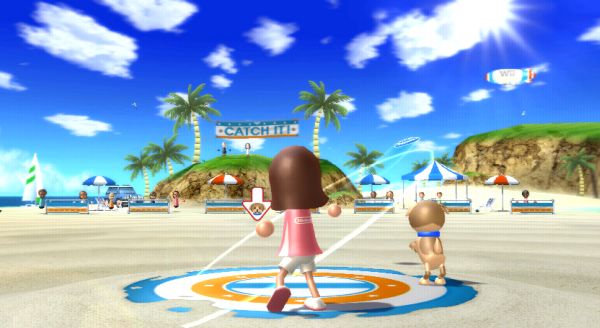 As in Wii Fit, the inclusion of unlockable activities and extras is a major hook in the early stages. Triumph through the early stages of Duel in Swordplay, for example, and you open up Speed Slice, where you compete against an opponent to be the first to slice through a watermelon, log or display with a single slash in a specified direction. Perform here and you open up a personal highlight, Showdown. In a sort of Nintendo take on Kill Bill or Shogun Assassin, it’s up to you to slice and dice your way through a horde of Miis in a selection of scenic island locations. Slashing wildly left, sweeping viciously right, it’s one of the few games out there where you get the chance to batter complete strangers senseless in a light-hearted, good-natured fashion. Quite cathartic after a tough week in the city, I can tell you.

Wii Fit also showed how fiendishly compulsive high-score table competition could make an otherwise simple game, and Sports Resort manages much the same thing. It’s mildly disappointing that only a handful of the games offer proper, simultaneous two or four-person play (though those that do, including Duel, Speed Slice, Table Tennis and Canoeing, all offer a lot of multiplayer fun). However, the fact that the game measures and tracks your performance and ranks you against other Miis makes the game inescapably addictive. Can I really just sit here while my better half dominates the Archery charts? Of course not. She’ll see I’m the best, even if I have to play all night! 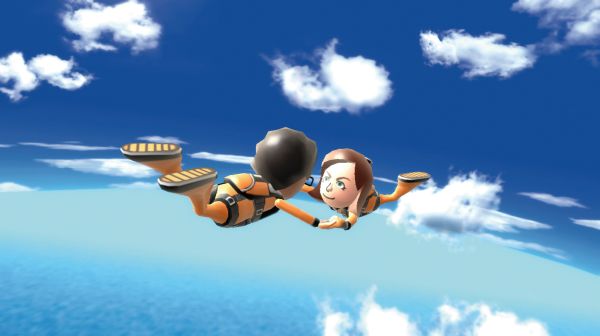 All of this is great for casual gamers, and the sort of people who have spent the last eighteen months dipping in and out of Wii Sports on wet Sunday afternoons or during dull family get-togethers can spend the next eighteen dipping in and out of its sequel. However, the game also has good news for more committed Nintendo fans, in that we get the closest thing yet to new versions of WaveRace and PilotWings on the Wii. PowerCruising is WaveRace Junior, giving your Mii the chance to slalom through gates and rings for points around a selection of six courses.


There are disappointments – the courses aren’t visually as varied as you might hope and there’s no AI competition on the water – but the handling is superb and the control system even better. Rather than merely holding the remote and tilting it, you hold the remote in one hand and the nunchuck in the other, then tilt both left and right as you might if you were controlling a jetski with your weight. Better still, a quick twist of the remote towards you guns the throttle, giving you a handy speed boost. It’s not quite WaveRace Wii, but it will do while we wait for the real thing to come along. 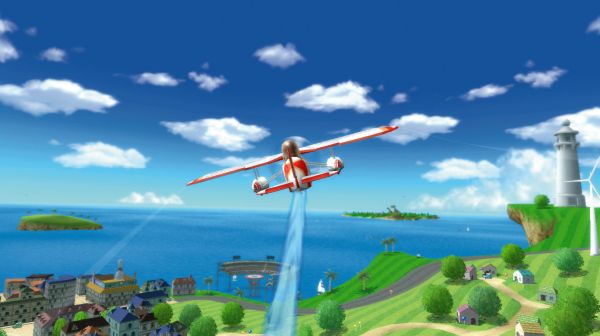 The PilotWings bit, meanwhile, comes in the Air Sports section. First we get skydiving – use the remote to shift your plummeting Mii through the clouds, so that he or she links up with other skydivers in time for a quick photo. The more Miis you hook up with and the better the poses and the more points you get. Like all of Nintendo’s best bits, it’s a concentrated dose of silly, unpretentious joy, and oddly relaxing in its own odd little way.


This leads on to Island Flyover, where you take a biplane out to explore the island, diving under rocky arches and speeding across bridges in an effort to collect every hidden marker on the map. The time limit imposed is perhaps a tad draconian, but then it just encourages you to make multiple trips, seeing and discovering a little more each time. 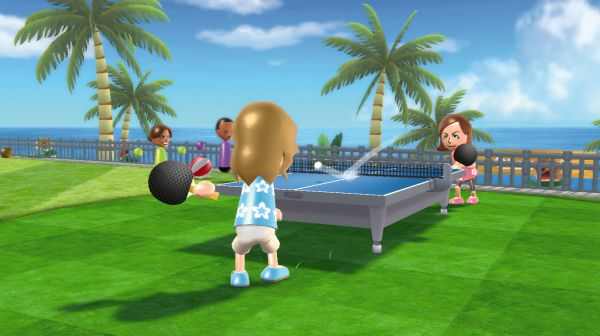 If nothing else, Air Sports gives you a chance to appreciate how much effort has gone into creating the WuHu island setting, particularly as there are different sights depending on whether you fly in daylight, at sunset or at night. This might not be a Mario or a Zelda, but even when it’s just a backdrop to a bunch of mini-games, Nintendo can’t help but stamp its character on a new world. Throw in a simple dogfight option, and there’s enough airborne action to distract you from the fact that there’s no hang-gliding or monster blasting to sink your teeth into.

Needless to say, Wii Sports Resort looks, feels and sounds ridiculously jolly; it’s the kind of place where Mii’s gather to shoot the breeze in tropical shirts and natty shorts, playing golf and practicing archery against a backdrop of bright blue skies and sparkling seas. Visually speaking there’s nothing here that you couldn’t have seen on the GameCube five years ago, but what does that matter? People clearly feel comfortable with the Wii Sports/Wii Fit look, and Wii Sports Resort fits right in with the house style. 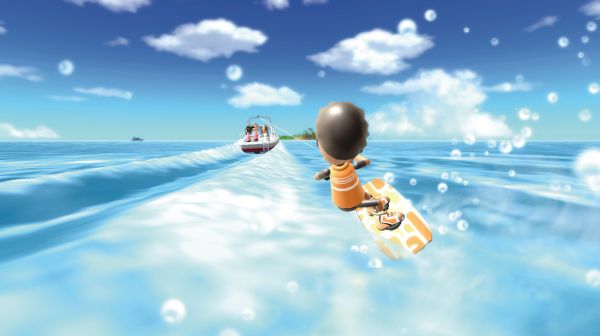 It’s still possible to moan about Nintendo’s latest. In fact, the same old criticisms that have been thrown at Wii Sports, Wii Fit and the Wii itself still apply. Sports Resort offers little to those who bought a Wii for a new Metroid, Mario or Zelda and have been smarting at the lack of big franchise titles ever since, and there’s no question that many of its pleasures are short-lived, even superficial.


Played on your own, as a single player, you could get all you wanted out of it in the space of a weekend. But then, why would you play it on your own, as a single player? Haven’t you got a family to share it with? Some housemates who might want to get involved? A few mates who might come back and play after a night out at the pub? On those terms it’s brilliant value, offering both more activities and more enjoyable activities than Wii Sports, and more good, honest living-room fun than most games outside of a SingStar or Guitar Hero. For that reason alone, it’s another unmissable Wii game. 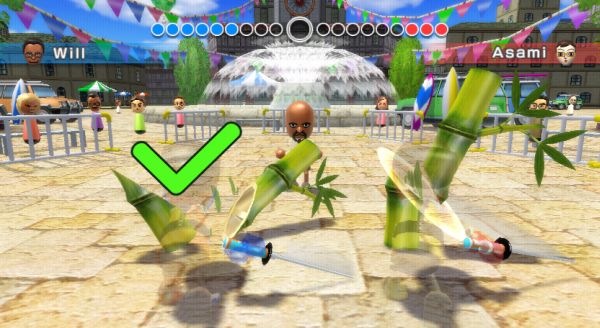 
With MotionPlus and a better all-round games selection, Wii Sports Resort deserves to be the new Wii flagship game. Other games offer more long-term depth or visual splendour, but few can consistently deliver this much fun.