What is When in Rome?

When in Rome is an Alexa-powered board game, not to be confused with the 2010 rom-com of the same name.

Amazon’s Echo devices already offer a number of interactive gaming experiences, but When in Rome takes gaming with Alexa to the next level. It combines a voice-driven travel quiz experience of which Alexa is your host and scorekeeper extraordinaire, with a traditional physical board game. For this reason, having an Amazon Echo or Alexa-compatible speaker is a pre-requisite.

When in Rome is designed for two teams to play against one another and the makers recommend a maximum of eight players.

But while the interactive quiz is relatively fun – if not a little slow-paced – the physical board game experience can feel a little bit tacked on. Still, When in Rome proves to be a hit among groups of friends, albeit one you might not be itching to break out on a regular basis.

When in Rome – What do you get?

Let’s start by making it clear that you don’t get an Alexa-compatible speaker. You’ll have to provide one of those, be that an Echo, Echo Dot, Echo Show or countless other speakers that now have Alexa smarts built in, such as a Sonos Beam. Without Alexa to play host to your game, you’re not going to get very far.

Otherwise, inside the well-presented box is the board, which folds up into a compact size with two components interconnecting into the game’s full board. It’s made from a thick cardboard and has a beautifully printed map of the globe on its surface in vibrant colours. This proves to be the basis of the game’s jet-setting premise. You also get a plastic bag containing two sets of colour-coded pieces for the two teams. These plastic tokens are well-made. 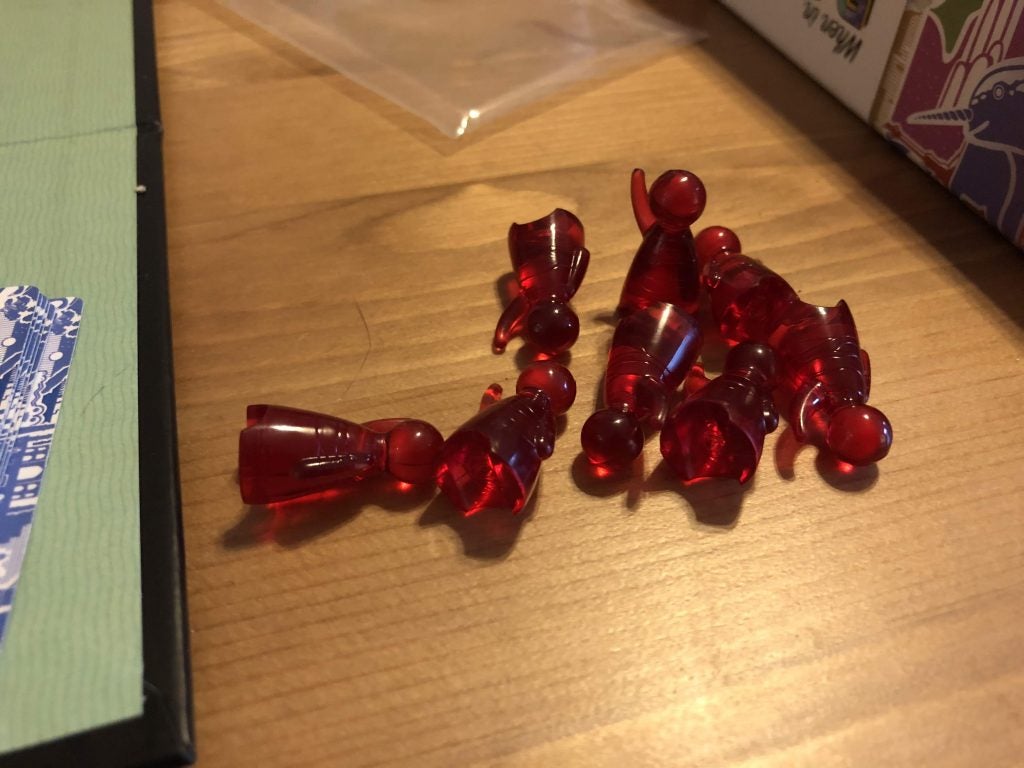 Also included are ‘souvenirs’, which are what both teams are looking to acquire throughout the quiz. These are represented by items such as a thimble, key and guitar pick. These don’t have a unifying design, in the vein of Monopoly’s famous tokens, which are all cast from the same metal, but are instead real-world items. The button souvenir is something that could realistically have come off your coat, for example.

Personally, while I can see what the makers Sensible Object were perhaps aiming for – these are items someone could feasibly have picked up along their travels  – I think it would have lent a more premium feel to the game had these pieces been custom made. As it stands, it feels like Sensible Object acquired a job lot of cheap buttons and guitar picks it could include in the game. 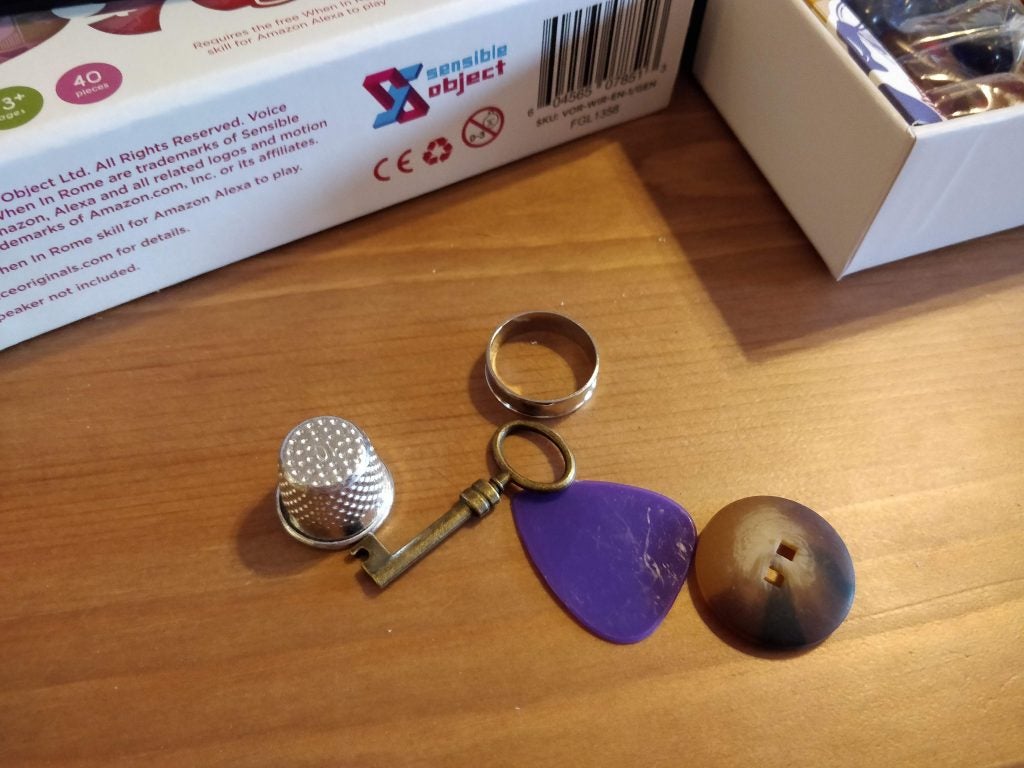 Finally, there are ‘Upgrade Cards’, which are special action cards you can play during the game that have different effects. These can be used tactically to really change the momentum or just to have a bit of fun.

Fundamentally, When in Rome is a travel quiz, where two teams battle it out with their general knowledge of world facts. Alexa gives you a helping hand from the outset, allowing you to essentially skip reading the instructions and instead rely on the voice assistant to explain the rules and handily keep score, so you don’t have to.

Essentially, your goal is to travel the globe country by country (20 in total) in order to make friends, thereby extending your routes. You’re trying to collect three souvenirs or gain the most points to win the game.

The game starts with each team telling Alexa where in the globe they want to start, at which point Alexa will introduce you to a local who will then challenge you with some trivia about that location. Get that question right and you’ll not only gain some points but also make a friend, who you mark with one of your team’s tokens. 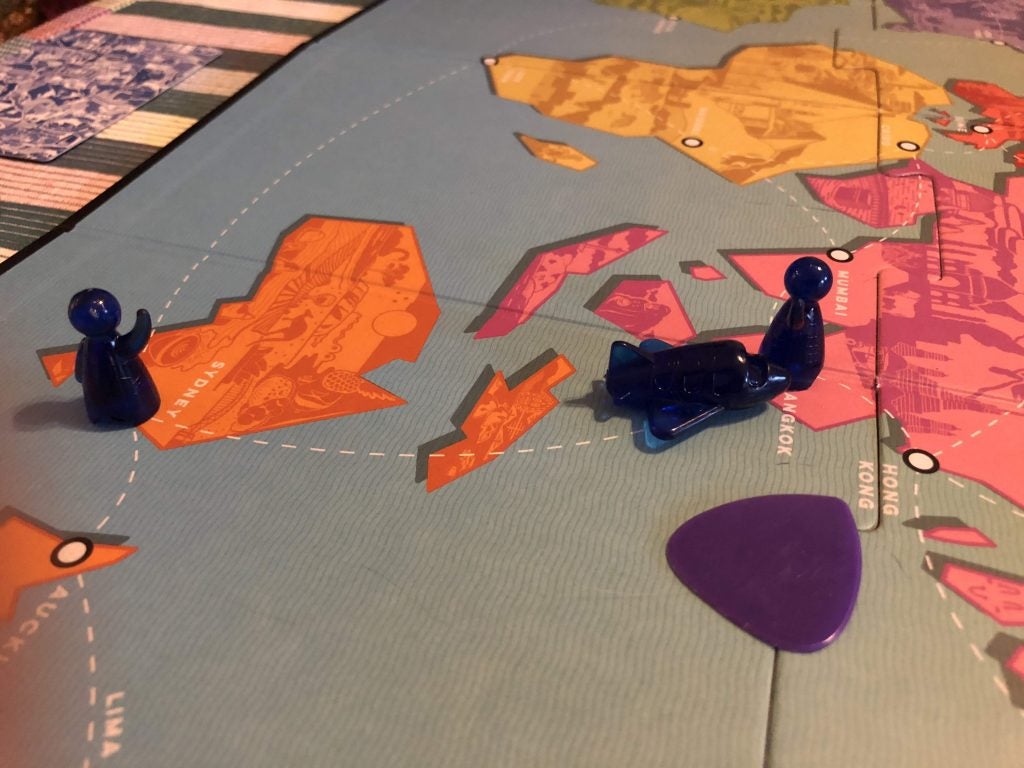 Having friends in the right places will allow you to traverse the globe, as otherwise you’re only able to fly to another city that’s directly connected to your current location.

Once you’ve made enough friends, they act like shortcuts that let you pass through. This means you can reach the other side of the globe in one turn, which is handy when you’re trying to swoop in on a souvenir. Flying to a city with an opposing friend means you get stuck there for a turn, without a question to answer. Bummer.

Along the way, you can activate Upgrade Cards, which require you to read out a command. These range from gaining hints to simply trash-talking your opponent while it’s their turn.

So the essential premise is basic, but Alexa helps add an extra layer, thanks to some stellar voice-acting from a cast representing friends that you visit across the globe. Each has their own personality and injects a bit of humour into proceedings. Once you’ve played enough games, you’ll begin to hear the same dialogue, which does slightly limit replayability but there are enough questions to keep things fresh, and Alexa should avoid re-using questions until you’ve been through them all. 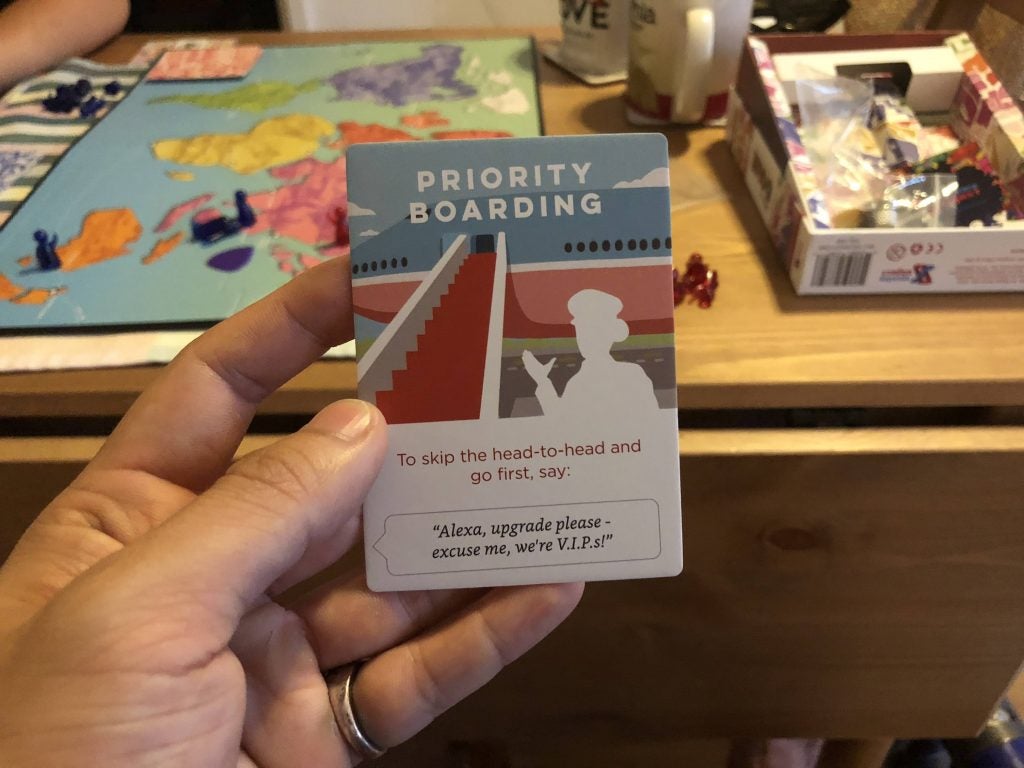 Games can feel like they can plod on a bit too long. Sensible Object rates a game as taking a minimum of 30 minutes, but even when it was just two players, without any need to confer with team mates, games took longer. Your experience may well depend on who you’re playing with – anyone with a short attention span might find it too slow.

Since the game is Alexa-powered, there are also Alexa-induced frustrations, which may well vary depending on the smart device you’re using. I played with an Echo Dot and experienced occasions when the device wouldn’t pick up my voice over the musical breaks for when you’re left to think about an answer. This led to having to raise my voice a few times.

Also, since it’s voice-driven, there’s nothing to stop the other team from cheating and intentionally shouting out an incorrect answer when it isn’t even their turn. This is probably more indicative of the people I invite over for a game night, however. 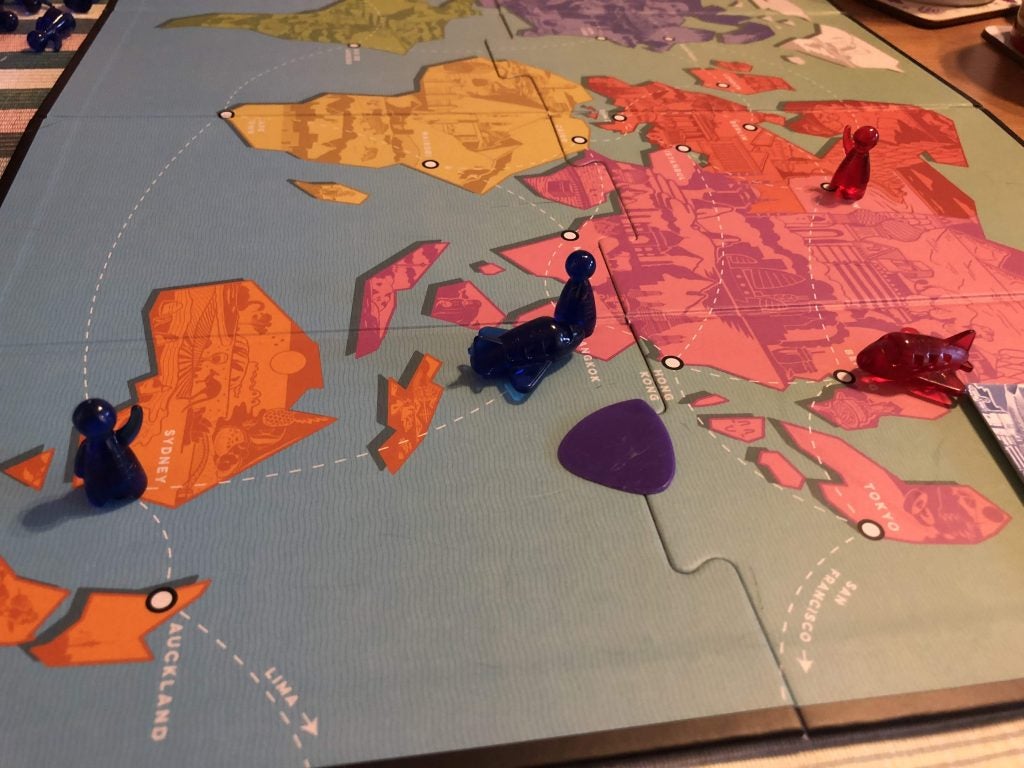 Why buy When in Rome?

If world trivia is your thing, When in Rome is a fun way to while away the time. However, the premise itself is very basic, and I’m not entirely sure the board game element completely justifies the relatively high cost. When in Rome could potentially work as a simple Alexa-powered quiz minus the board game component, which feels a little loosely tied in.

The high production values of the quiz, with high-quality voice acting, does at least add to the experience. If the overall package was perhaps £10 cheaper it would be an easier recommendation, but at £25 it feels a tad expensive.

Still, When in Rome is a fun distraction to break out at your next gathering, and the idea of a voice assistant and board game combo is one that has a lot of potential.

A novel Alexa-powered travel quiz, but one that feels expensive for what you’re getting.