What is the Western Digital WD TV Play?

Time was media players were about one thing: codecs. And time was one little media player ruled them all: the original WD TV. With the world quickly adopting streaming across both music and video, however, the war has moved on. Now WD TV maker Western Digital is back with the WD TV Play, which it claims excels at both while hitting a new price low.

If the premise is ambitious, the design certainly isn’t. The ‘hockey puck’ box is now as much a staple of the media player market as smartphone slabs and ‘unibody’ laptops. This isn’t to say Western Digital has done a bad job. Certainly the Play knocks off the Apple TV, but its curves are similarly graceful and it could just as easily fit in a coat pocket as under your TV.

In fact, if we had a gripe about the Play it is that it feels too light. This comes down to build materials with Western Digital cutting costs by using cheap plastics. We also aren’t convinced by the mixture of finishes with the matt black top clashing with its gloss sides, but the hint of blue created by the entirely blue base does win us over.

Apple would no doubt call the Play a cheap copy and it may well be, but we’ve seen far worse.

While the Play cuts costs on the outside, it doesn’t where it counts. Sticking to its roots, the Play supports a vast array range of codecs. For video lovers there’s AVI, MKV, MPEG4, MP4/MOV and WMV9 to name but a few, while music lovers get numerous formats including MP3, WAV, WMA, AAC, FLAC, OGG and Dolby TrueHD. There is also JPEG, GIF, TIF, BMP and PNG image support as well as a wide selection of playlist and subtitle formats.

Looking to the future the WD TV Play embraces a significant number of streaming options. We may lose its Hulu and Pandora support in the UK, but staples like YouTube, iPlayer and Netflix are joined by SlingPlayer, WVimeo, VUDU, DailyMotion, Spotify and CinemaNow. There are also widgets for Accuweather, Facebook, Twitter, Flickr, Picassa, Flixster and more. If you don’t own a smart TV, the WD TV Play gives you a potentially decent stand in for very little outlay.

Connectivity is also good. Squeezed into the Play’s dainty dimensions are HDMI, Ethernet, optical, auxiliary and USB ports plus 2.4GHz 802.11n WiFi. The greater speed of 5GHz 802.11n WiFi would’ve been welcome (as would 802.11ac), but it isn’t a grave omission.

There are multiple control options, too. The WD TV Play comes with a fairly uninspiring remote with overly spongy buttons, but Western Digital also supplies virtual remotes via iOS and Android apps. More of which later.

Boot up the WD TV Play and what immediately strikes you is how far media player user interfaces have come. The home screen takes inspiration from the Windows 8 start screen with large, colourful tiles and a favourites area to which you can pin as many apps and services as you like. 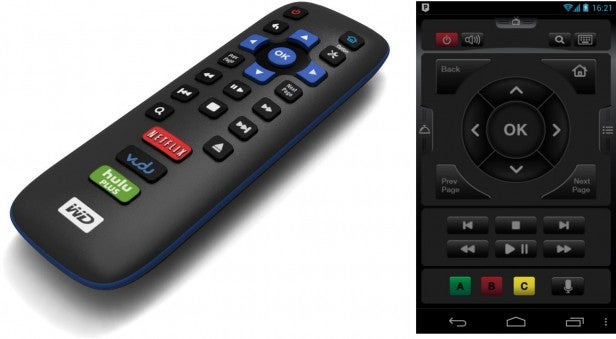 Setup is simple since each service takes you through a setup wizard on first start, though usernames and passwords are best done through the smartphone apps as they provide access to a full keyboard. We also found the apps easier to use in general as they have dynamic layouts, a dedicated services section with quick access icons for every service and the ability to toggle between a standard control dial or touchpad for navigation.

By contrast the physical remote is limited and fiddly. Notably, the back button is positioned right below the power button (which caused us to accidentally switch off the Play on multiple occasions) and a dedicated Netflix button, which is only useful to Netflix subscribers and cannot be customised. 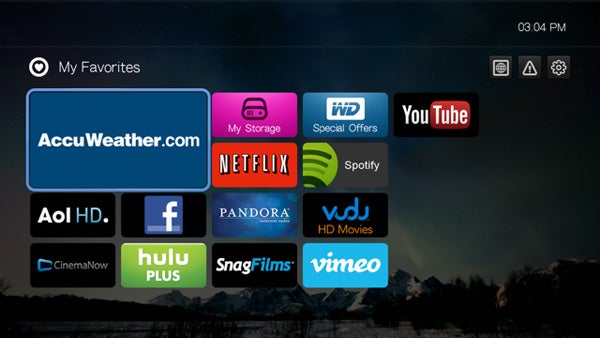 That said getting the WD TV Play up and running is nigh on foolproof, which means getting to your content is only minutes away.