When Western Digital released its first media player, the WD TV HD Media Player, calling us pleasantly surprised would have been an understatement. It’s fair to say that the company’s little black box changed the playing field for media players, with support for every music and most video formats at no less than 1080p – a rarity in units at its sub-£100 price point – all wrapped up in a neat little box with a sleek interface. While we’re eagerly awaiting the rumoured sequel, WD has launched an alternative that supposedly complements both its original and forthcoming players, called the WD TV Mini. 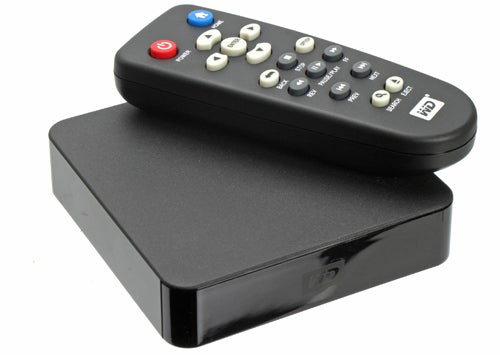 As its name suggests, this is a far smaller device, measuring a diminutive 91 x 91 x 22mm. In fact it’s smaller than the accompanying remote, which is the same undersized model bundled with the original WD TV. The good news is that the Mini is also cheaper than its bigger sibling, but the bad is that in order to achieve this several formats have been dropped as has the digital video output, and the Mini can no longer decode H.264. On the other hand it does now support RMVB, a codec that is lacking in the larger WD TV.


In terms of design, the new Mini is a triumph. It’s not only more attractive but also more sensible than its larger sibling, thanks to its top and bottom sporting a matt textured finish rather than the scratch and fingerprint-loving glossiness found on original. The slim sides are still piano black to add a touch of glamour, and bring out the unobtrusive blue-backlit power and activity icons nicely. Build quality is also top notch, with strong plastics used throughout. 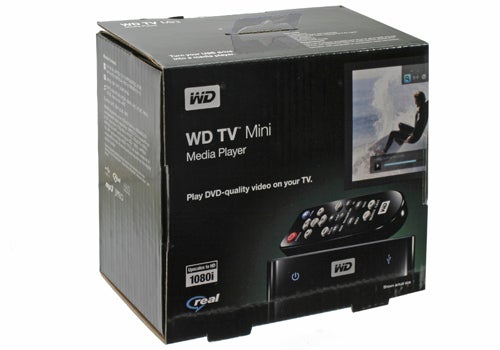 As already mentioned the remote remains mostly unchanged, with the exception that its finish has also – sensibly – transitioned from glossy to matt. It uses two AAA batteries so those who care about the environment can use rechargeable ones. It’s solid and comfortable, and though its buttons don’t feel particularly pleasant, they’re well laid out and clearly labelled making it easy to use.

Connectivity is where things start going downhill slightly. The Mini only has a single USB input to read memory sticks or external hard drives compared to the WD TV’s two, and more significantly, though an optical digital audio output has been retained, HDMI is no longer available. For video output we now have two 3.5mm jacks, one for composite video/RCA audio and the other just for component video, with special cables provided.


This is a significant step back for Western Digital, as it means this media player can no longer be used with most PC monitors (which only offer HDMI/DVI and VGA) – surely a prime market for people looking at players around this price point? It also means you have to have two audiovisual cables hooked up to the Mini if you care about quality, since the component cable only carries video signal. It’s worth keeping in mind that the composite/audio jack won’t take a regular 3.5mm audio cable either, so it can’t be used as a headphone connector.

Setting the WD TV Mini up is very simple. Just plug in the power brick (which is almost as large as the device itself) and the two audiovisual cables – you really don’t want to use composite video if you have the choice. Finally plug in a drive with some media and you’re ready to go.


You’ll want to set the Mini’s resolution to the maximum it and your screen can support. Together with the HDMI connection the mini has lost the ability to send a Full HD 1080p signal, though it will happily do 1080i at up to 60Hz. Once configured properly (it’s set to 480i/4:3 by default) it will up-scale everything to 1080i, at which it does a credible job for such a cheap unit. The processing doesn’t make standard definition sharper or better-looking, but at least it’s watchable scaled to the higher resolution. 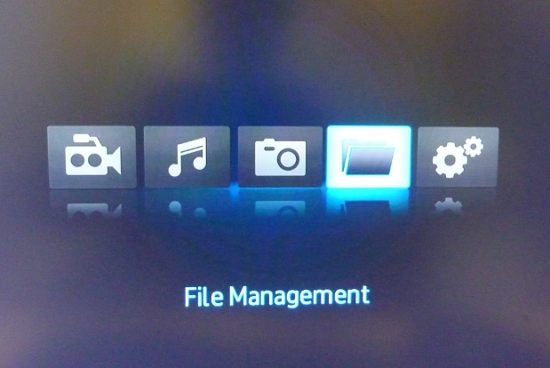 Divided into Videos, Music, Photos, File Management and Settings, the Mini’s blue, black and white interface is clean and attractive, and generally responsive as long as you’re not dealing with DVD-size files (over 4GB). Like the interface found on the WD TV HD, it’s one of the better ones we’ve come across for media players in every respect. Icons and groupings are logical, and you can choose from a wide variety of setup options – including screensaver and slideshow timings, transition effects, whether or not to show picture icons for video, subtitle size, and the list goes on. It’s full of clever touches too, like the way the previous/next buttons on the remote skip through whole ‘pages’ of photos at once with a nice animation. 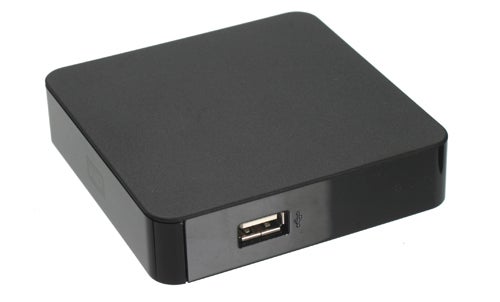 Despite equally prolific subtitle support (SRT, SSA, SUB and SMI) though, video formats are nowhere near as extensive. Xvid/DivX, MPEG1/2/4, MPEG, VOB (DVD rip), MP4/MOV and RM/RMVB is the limit of what you get, which aside from the RMVB is not much better than your average £50 media player. Granted, most of those aren’t as small and sleek as the Mini, but it just feels like a disappointment after the original WD TV.


If you really fancy a tiny unit and don’t mind the lack of H.264/.MKV support or a digital video output, the Mini should be right up your street. Its biggest problem, however, is that at just under £60 it’s only around £10 cheaper than its fully-fledged sibling, which offers all this and more – except for native RMVB support.

Things have moved on dramatically even since that little box though, and we’d definitely recommend checking out Asus’ O!Play HDP-R1 HD Media Player. This not only gives you everything the WD TV does but adds RMVB, FLV, DTS and Dolby Digital Plus support in addition to eSATA connectivity and network streaming for a mere £73 – an absolute bargain for its huge range of features, even if its build and interface aren’t quite up to the WD’s standards.


Western Digital’s new WD TV Mini media player is sleek, attractive and well-built. But without HD playback or even a digital video output, the Mini lacks that universal appeal and the edge over the competition that its bigger sibling enjoyed.