What is the Weight Watchers Healthy Fold Out Grill?

Enjoy seared steaks, chicken, fish and vegetables with little or no oil thanks to this smart yet affordable grill. The Weight Watchers fold-out health grill’s hinge can rotate to open out flat, both increasing the area of its cooking surface and make adding and removing food easy. It even has an automatic temperature control, allowing you to switch between veggies and meat without burning.

When used as a standard health grill, its floating hinge means it will adjust to cooking thicker foods without fuss.

Even when laid out flat, the grill isn’t especially sizeable; each plate measures just 23 x 14.5cm. While this means it’s a worktop space-saver, it’s only capable of cooking an entire meal for one or two people.

From the outside, it looks a little like a sandwich toaster with two lights: red for heating up; green for when it’s ready to cook. A slide-out drip tray collects any fat and juices that have drained away. There’s no on-off switch or lock to keep the two plates together when not in use, so it won’t be so easy to store vertically without the halves separating.

On the top is a cool-touch handle and distinctive Weight Watchers branding. Inside, the grill features two fixed marble-ceramic non-stick plates, both with deep grooves and a small lip to direct the fat away from the cooking food. There’s the option of using it as a press, or there’s a release button at the side so it can fold out flat. 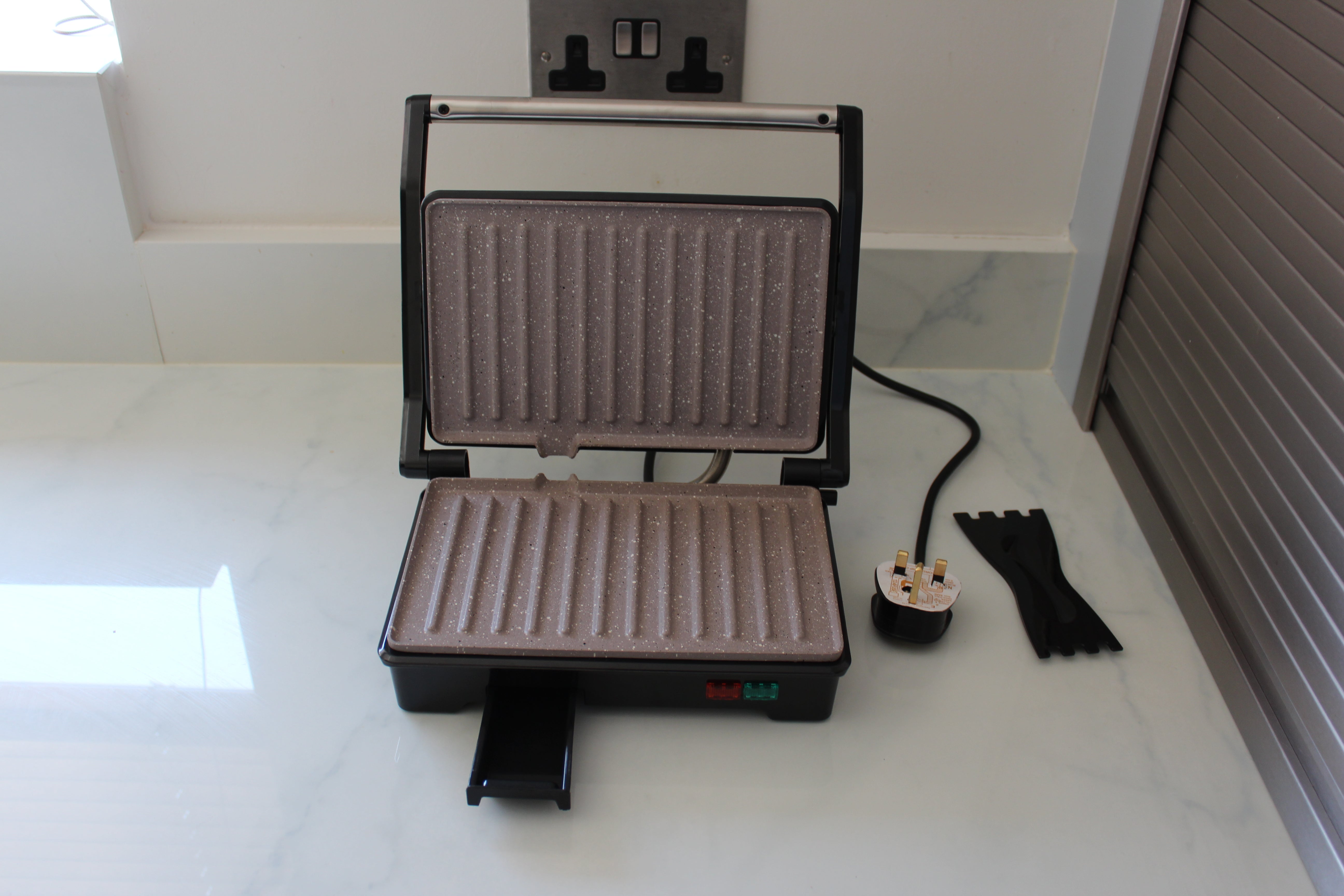 Weight Watchers Healthy Fold Out Grill – What’s it like to use?

Since there are no buttons, timer or settings, you can get going with the Weight Watchers grill simply by plugging it in. It heated up from cold in only a few minutes, with the light turning from red to green to show it was ready to use.

There are four Weight Watchers recipes (with SmartPoints per serving) to help you get started. I began by cooking the griddled vegetables with the grill plates flat – a recipe that required oil as would a conventional griddle pan. While heat-up was quick, the grill was quite slow at cooking the vegetables. 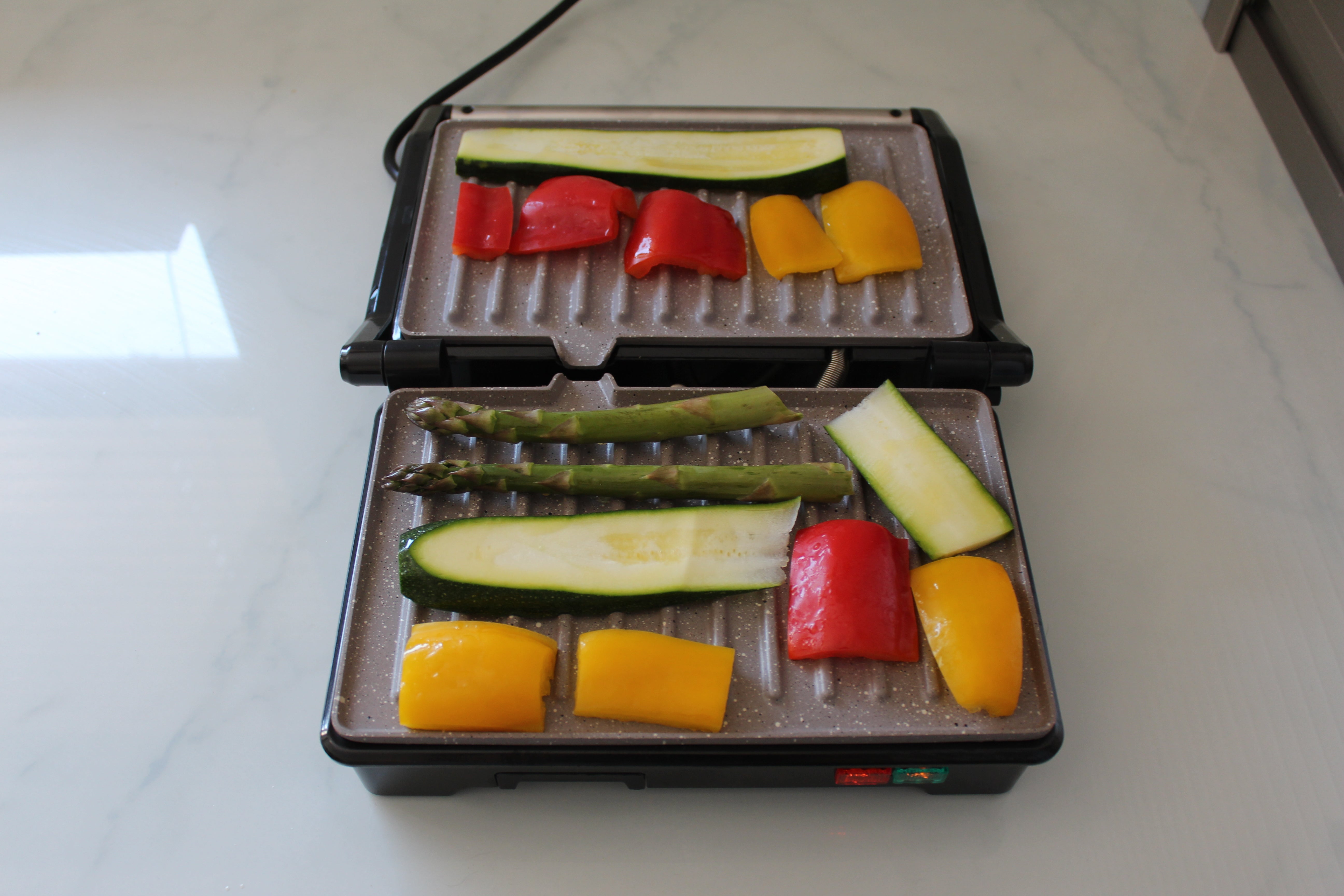 To get them to a slightly charred state as suggested took around 8 minutes on one side, then 5 minutes on the other. This is longer than it would have taken in a griddle pan.

It was easy to turn the veg with the grill flat, but hard to judge how cooked they were, having no clue with regards to the temperature the plates had reached.

When they had finished cooking, the asparagus was still quite crunchy, but the peppers and courgette slices were soft and seared. A small amount of oil had run off, but most remained on the plates. 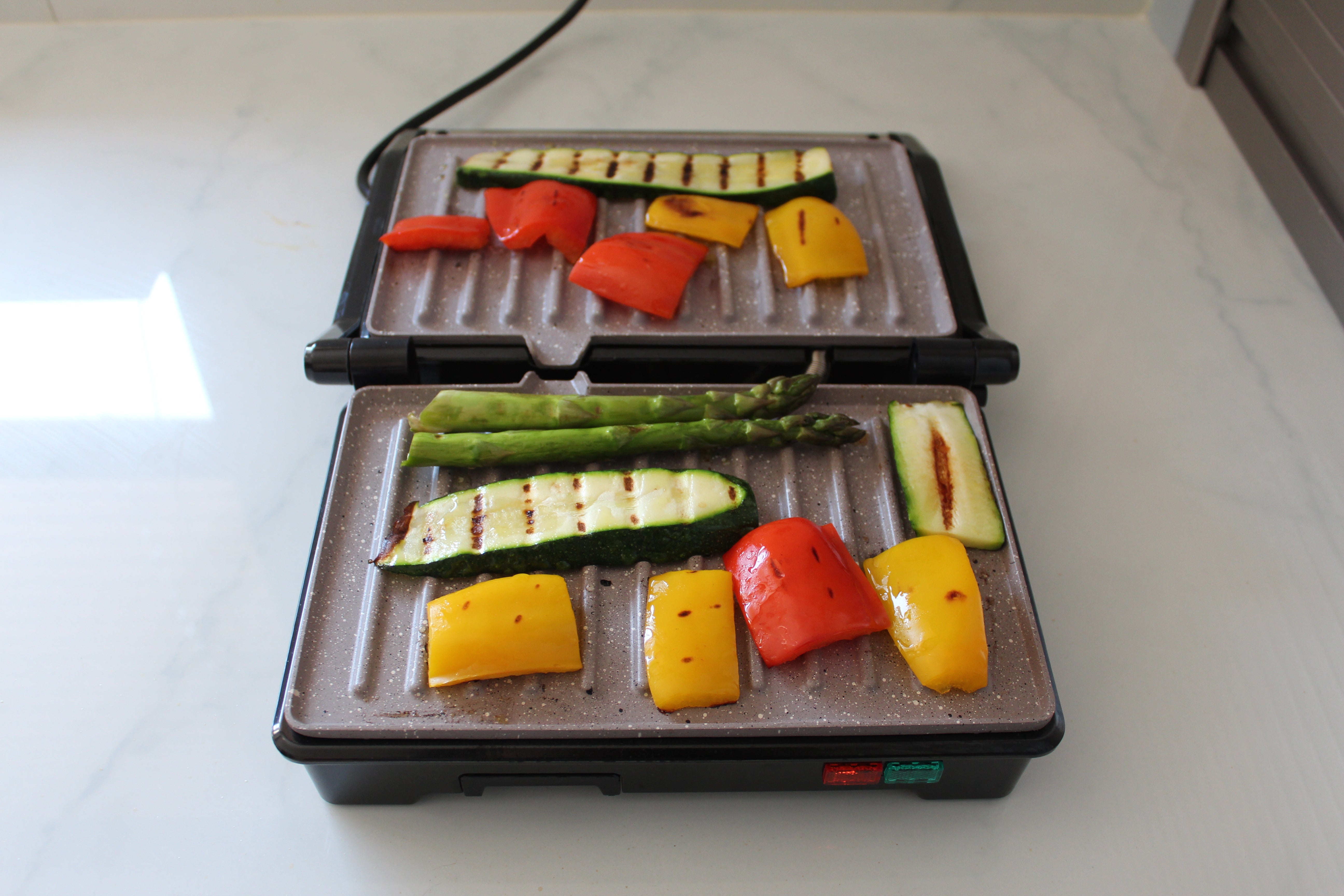 Next, I tried a recipe for tandoori chicken, using yogurt-marinated chicken breasts without oil. Since there was no guidance for using the grill open or closed, I decided to use it in its press position. Placing the breasts onto the grill resulted in a fair amount of steam being released – as did closing it – plus some spitting. 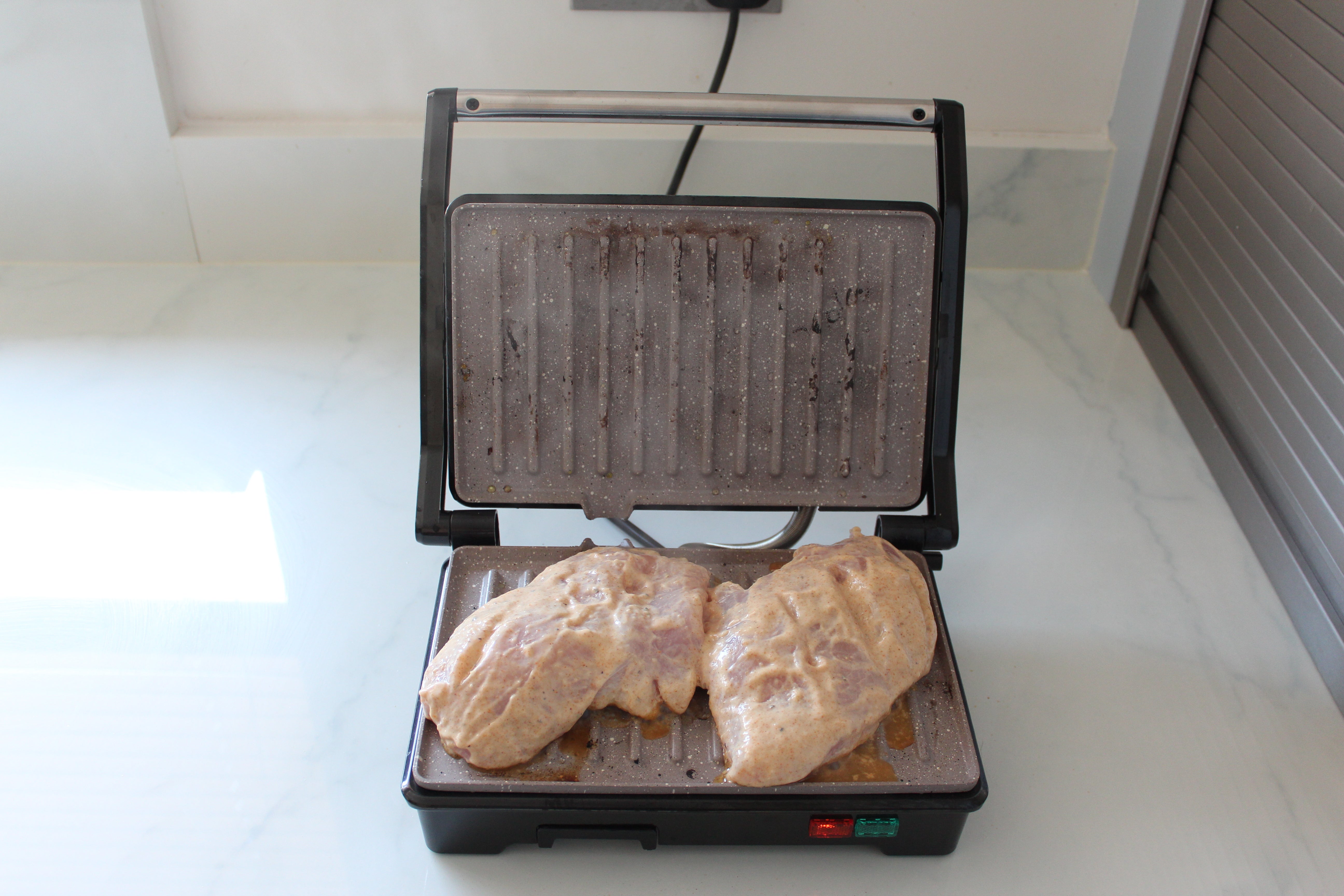 The grill wasn’t quite large enough to accommodate both chicken breasts comfortably, so parts of the meat were sticking out at the sides. The grill appeared to grow much hotter as it cooked the chicken, with continuous steam making it tricky to determine progress. 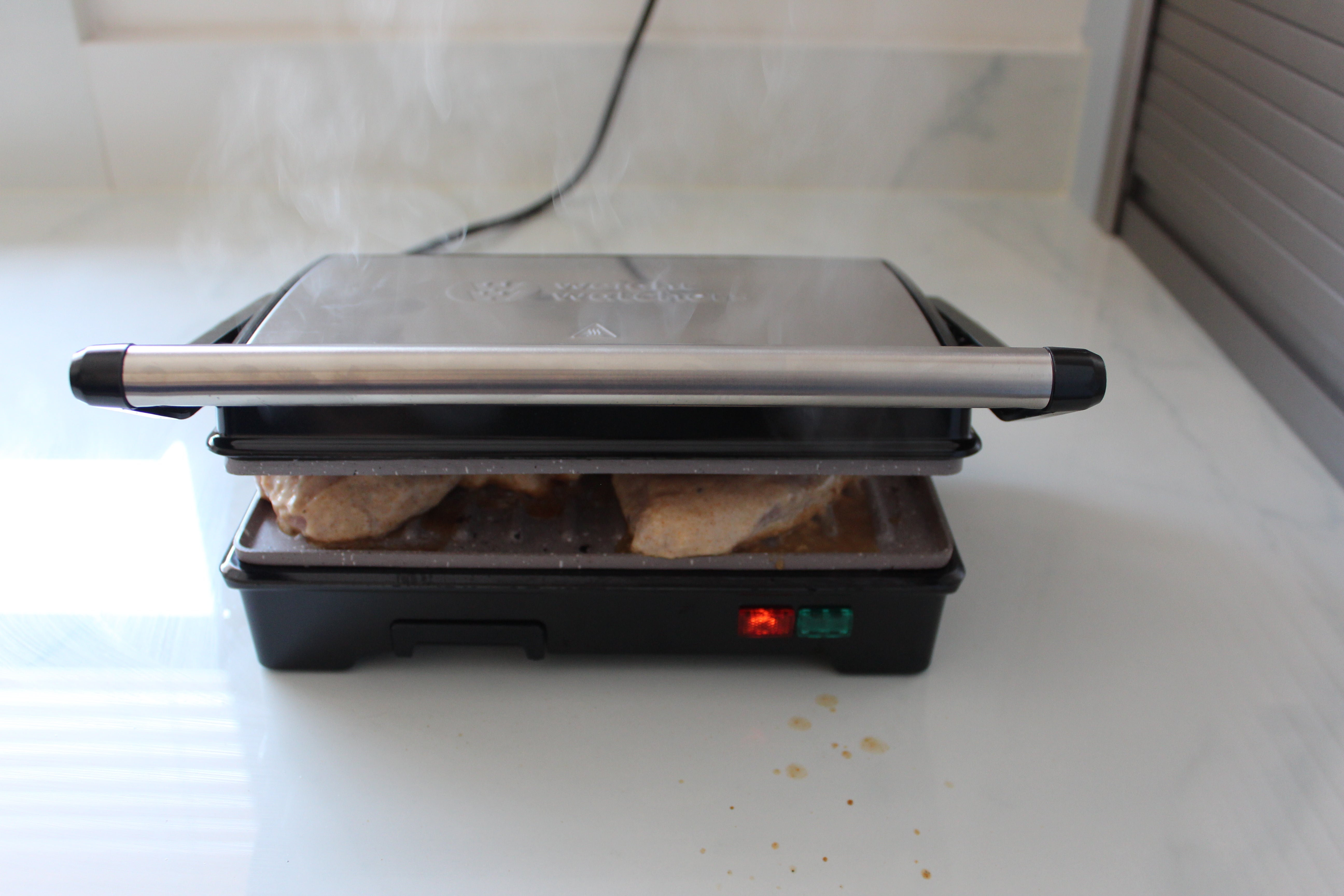 The advised cooking time was 8 minutes – although, rather confusingly, a second cooking time of 20 minutes was also supplied. After this time had elapsed, I opened the grill to find that the outside of the chicken had burned badly.

One again, knowledge of the plates’ temperature would have helped with keeping track of progress. However, both breasts were sufficiently cooked and after removing the burnt exterior, the chicken was both tender and tasty. Both plates are fixed, and so required cleaning in-situ. However, most of the burnt food was easily wiped away, with only a soak needed to remove smaller stubborn scraps of grease and reside. Why buy the Weight Watchers Healthy Fold Out Grill?

Its lower-fat cooking at an affordable price tag makes the Weight Watchers Fold Out Grill a great buy for anyone looking to make a lifestyle change on a budget. However, the lack of variable temperature means you’ll need to keep a watchful eye on cooking progress to prevent food burning.

The limited plate area will also prove frustrating if you’re cooking for more than one person – this grill definitely isn’t suitable for converting the whole family to a healthy-eating plan.

On the plus side, the plates genuinely are non-stick, so cleaning won’t be as nightmarish as some fixed-plate models.

A good value-for-money health grill, if you’re willing to work around its drawbacks.