What is the Weight Watchers 2-in-1 Blender To Go?

Part-blender, part-personal smoothie maker, the 2-in-1 Blender To Go is ideal for kitchens where counter space is at a premium.

Not only will it whip up fruit smoothies and protein shakes in its flip-top drinks bottle, it also functions as a versatile blender, blitzing sauces, milkshakes and batters for midweek meals.

Rather than a plastic jug, its container is made of glass for extra durability, plus its detachable blades mean it’s simple to wash after use. None of its parts are dishwasher-safe, though. 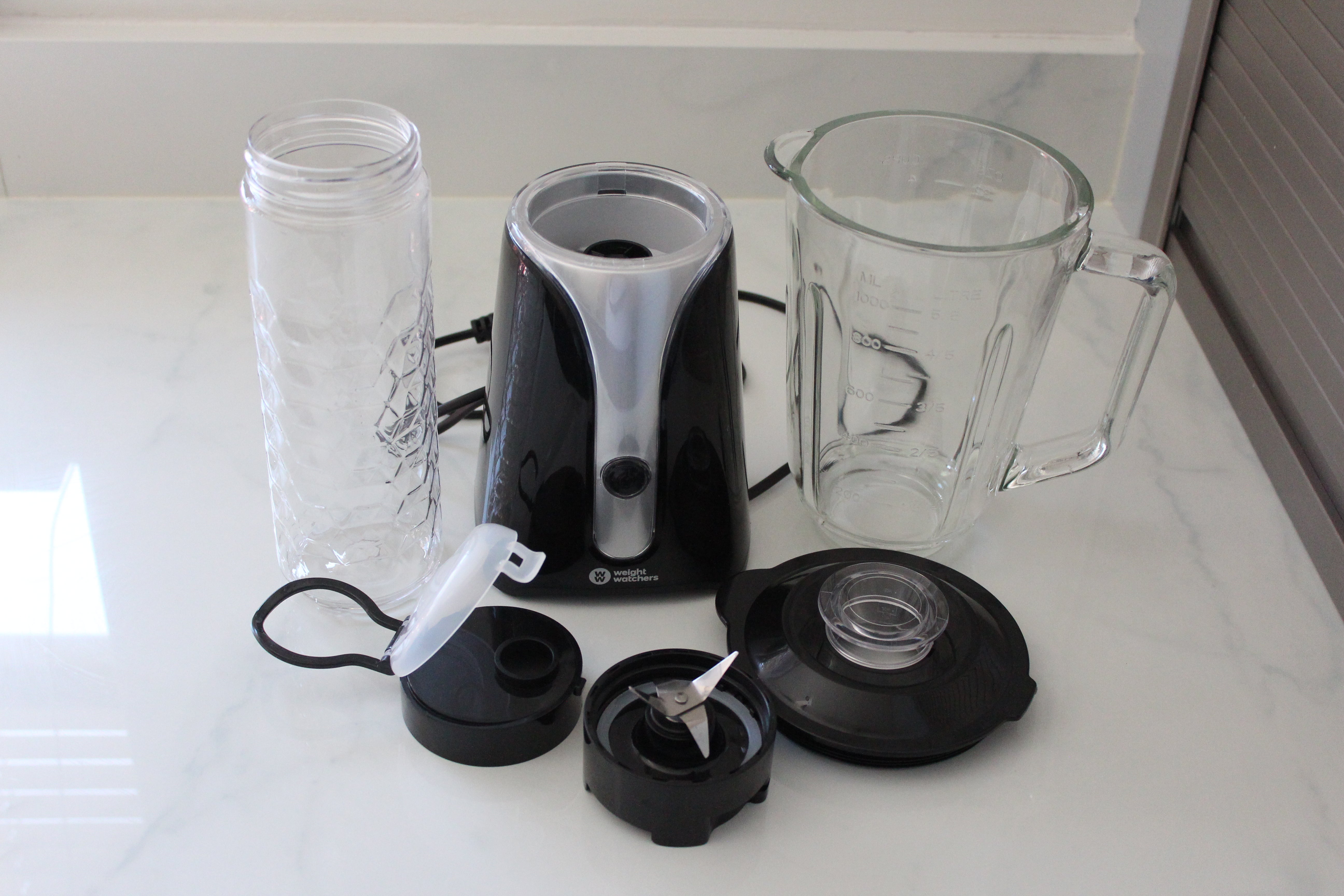 Weight Watchers 2-in-1 Blender To Go – Design and features

Occupying a tiny worktop footprint compared to most blenders, the 2-in-1 Blender To Go is as space-saving as it is budget-friendly.

It comprises a tall, rather than wide, base with a single button for blending. This lights up when it’s plugged in; the base is finished in simple black and silver.

A blade unit equipped with four small knives screws into either the glass jug, for processing larger quantities, or a faceted sports bottle. Both twist and lock into the base.

There’s a push-on lid for the jug made of two parts (so ingredients can be added while blending), and a drinking cap with a flip lid and carry loop for using the bottle on the go. 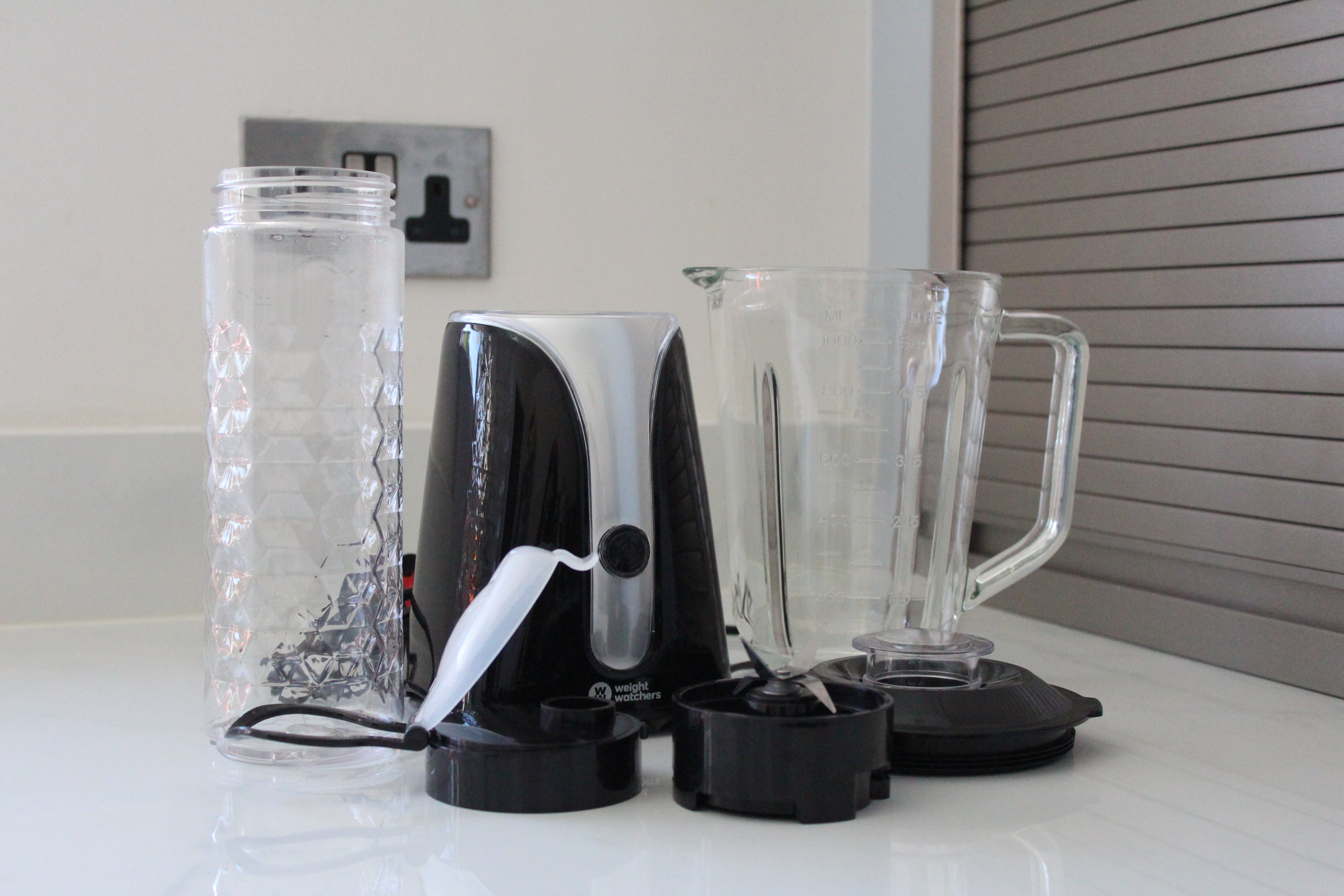 To blend, the button on the front has to be constantly depressed, so you can’t set it blending and walk away. Maximum blending time is one minute, after which the appliance needs time to cool.

This makes it unsuitable for large tasks or prolonged use. A 350W motor means it can lack power, plus the blender is unsuitable for hot liquids, so you’ll need to wait for soups to cool before processing them. There are no programmes.

Weight Watchers 2-in-1 Blender To Go – What’s it like to use?

There are five Weight Watchers recipes (three of which are 0 points) included with the 2-in-1, providing some inspiration for getting started. I began by making the Creamy Coconut & Avocado smoothie in the bottle. As the top of the bottle was narrow, it was tricky to fill with spinach leaves, with even small pieces of avocado along with the leaves becoming stuck to the side.

Before adding the coconut water, the recipe suggested an initial blend of the spinach and avocado. However, this proved to be ineffective as even with the bottle inverted on the base, the ingredients didn’t fall down towards the blades.

I added the water, after which the contents started to blend – although I found having to push and hold down the power button inconvenient. During a busy breakfast, this would feel like a poor use of limited time. 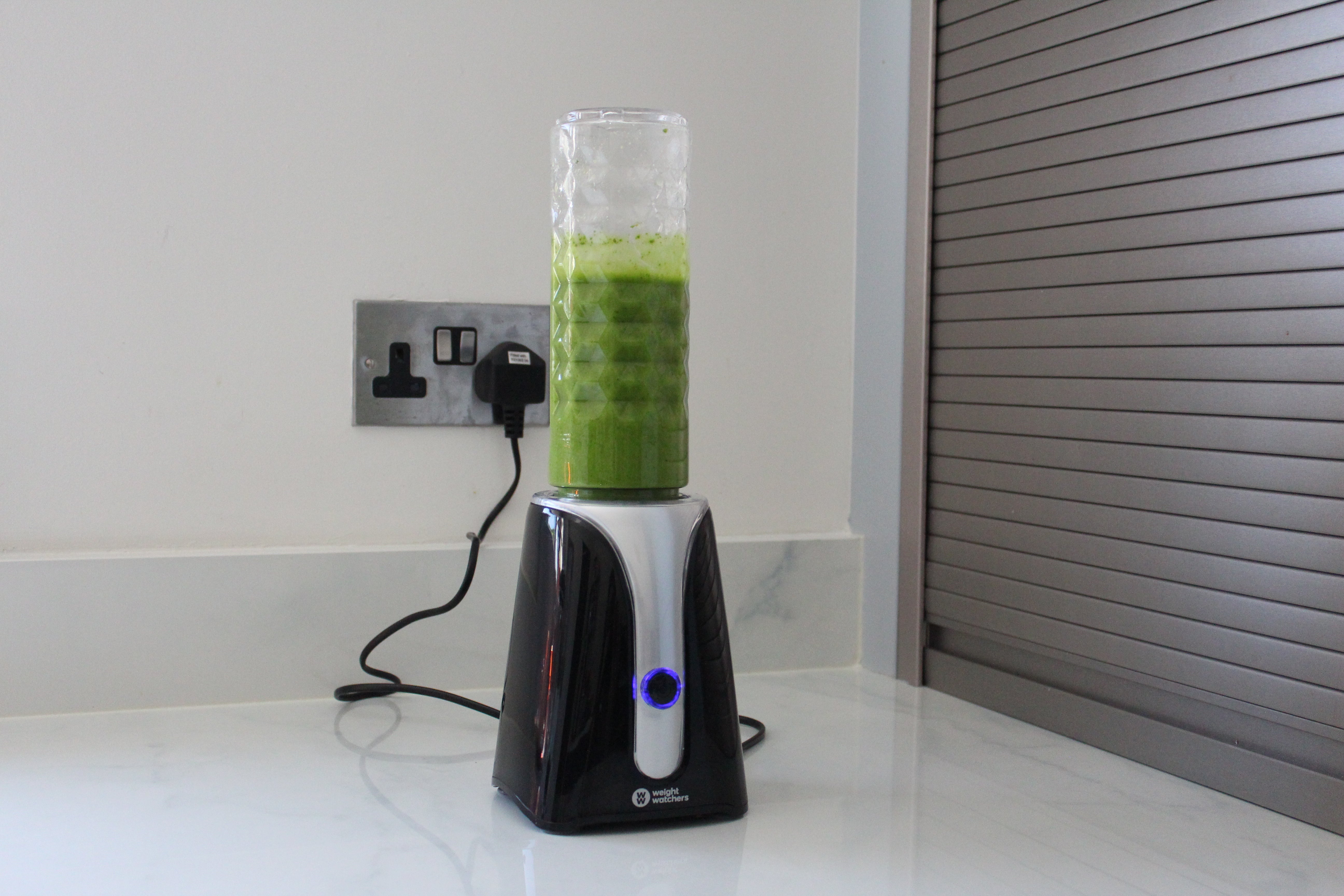 After around a minute, the smoothie looked like it was a consistent colour, with only small flecks of spinach on view. Screwing on the lid, I found that the bottle was easy to drink from – and, when inverted, didn’t suffer from any leaks. 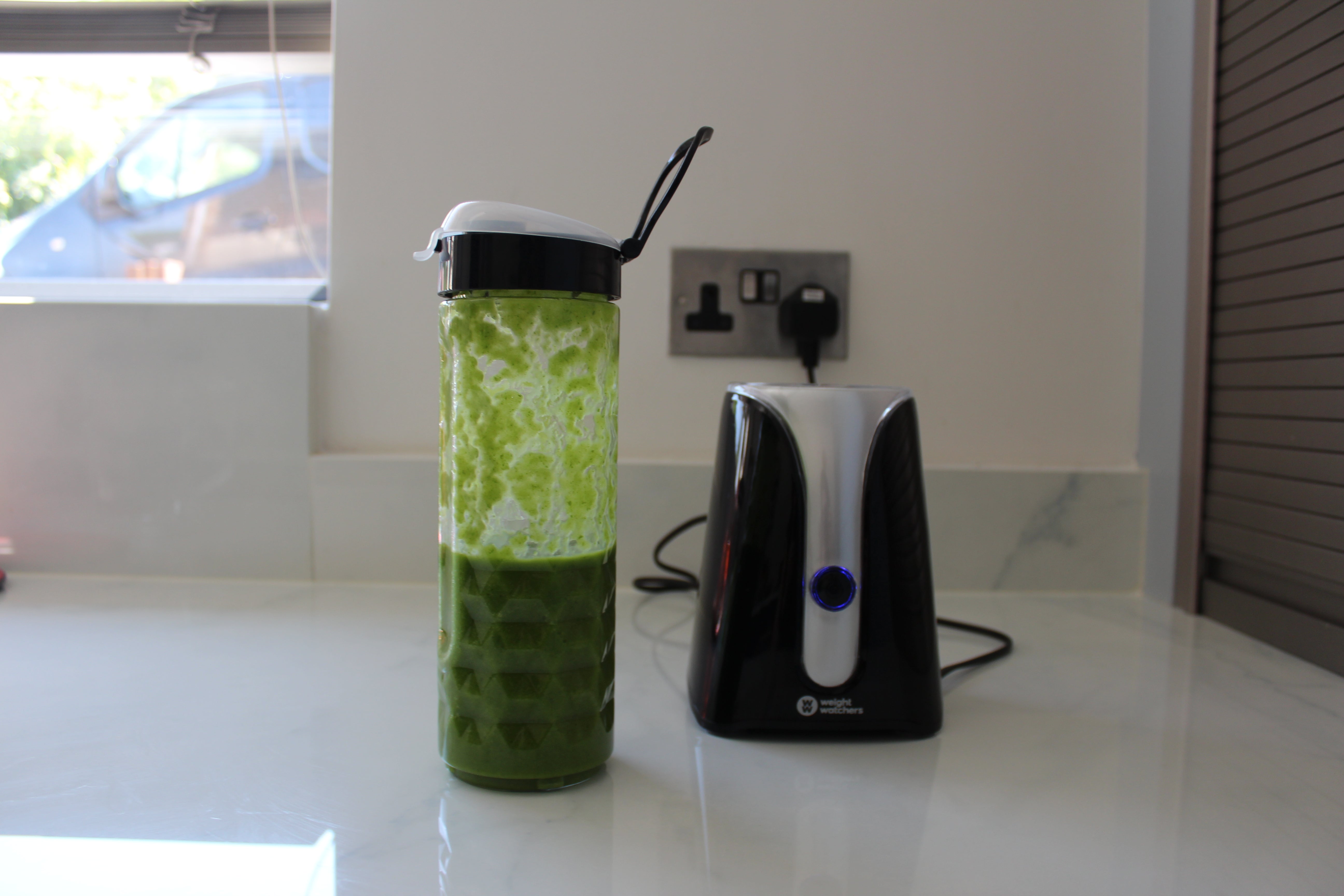 Next, I made the recipe for frozen yogurt in the glass jug, using half the quantity of frozen fruit, yogurt and sweetener. Even though I was only making half, the ingredients filled more than the corresponding proportion of the jug, so it might be a challenge to make a whole batch.

The plastic lid was very difficult to fit, as it was too large for the jug’s opening. It had to be forced into place to prevent a potential mess. 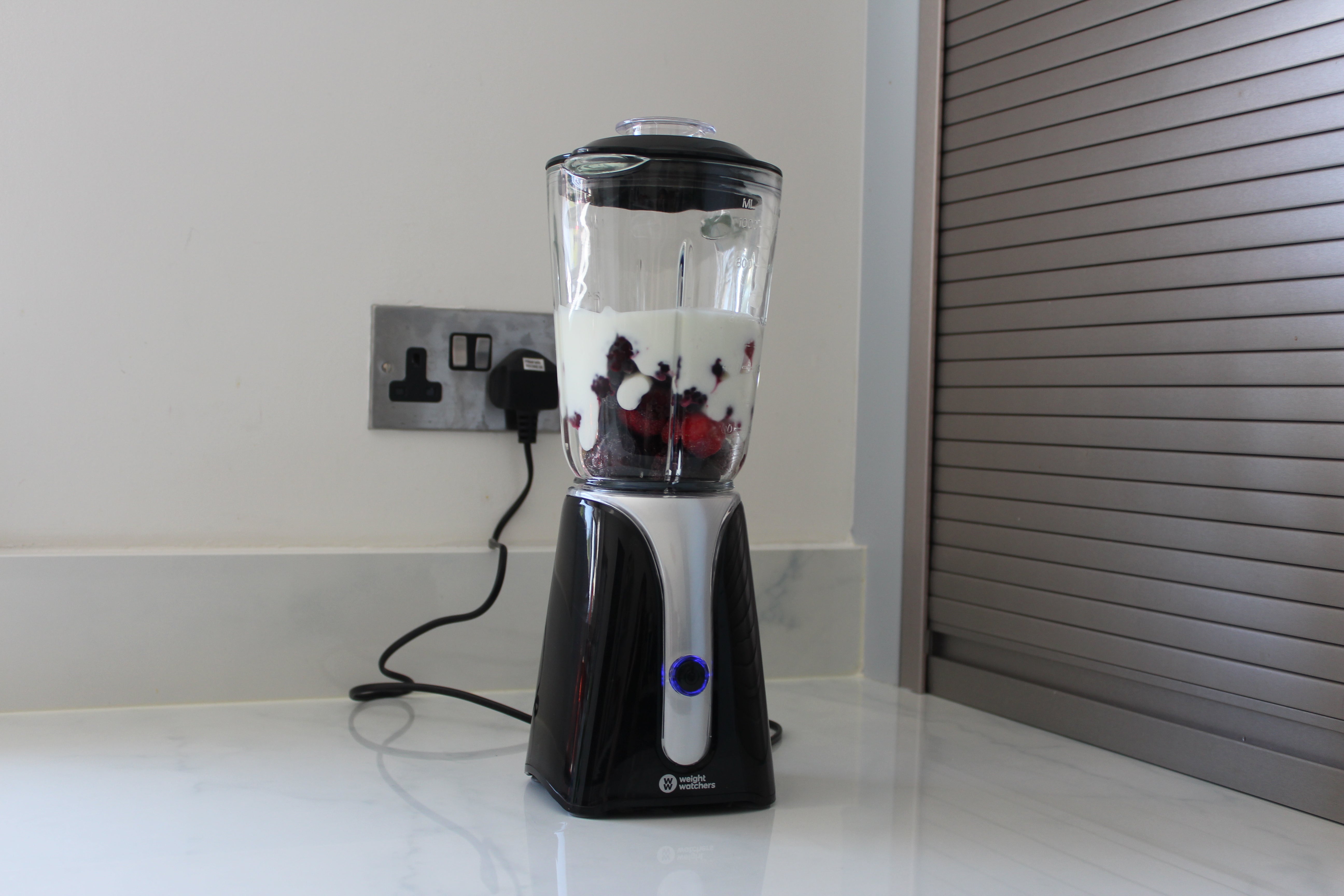 Initial blending did very little – the frozen fruit simply clumping together and the blades struggling against it. Also, a slight burning smell became apparent.

Repeated removal of the jug from the base and shaking the contents to redistribute them eventually yielded some success and after several minutes, the fruit started to blend with the yogurt. 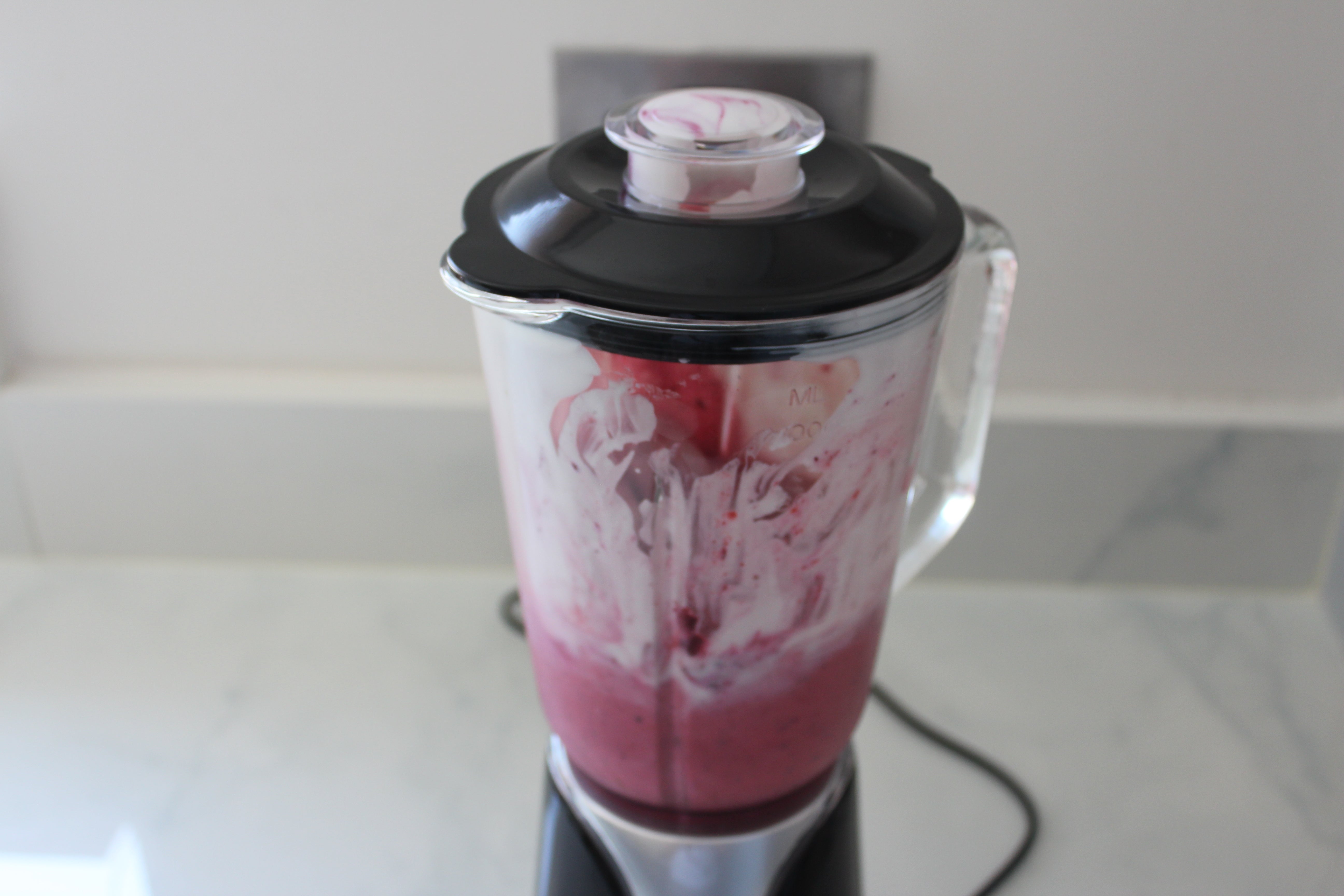 The lid was as hard to remove as it was to fit. Inside, around a quarter of the yogurt remained unblended and there were a few chunks of frozen fruit too.

After removing the frozen yogurt, I attempted to unscrew the blade unit from the jug – but it was stuck in place. Once the jug had returned to room temperature, I was able to detach it, although it did prove rather difficult. 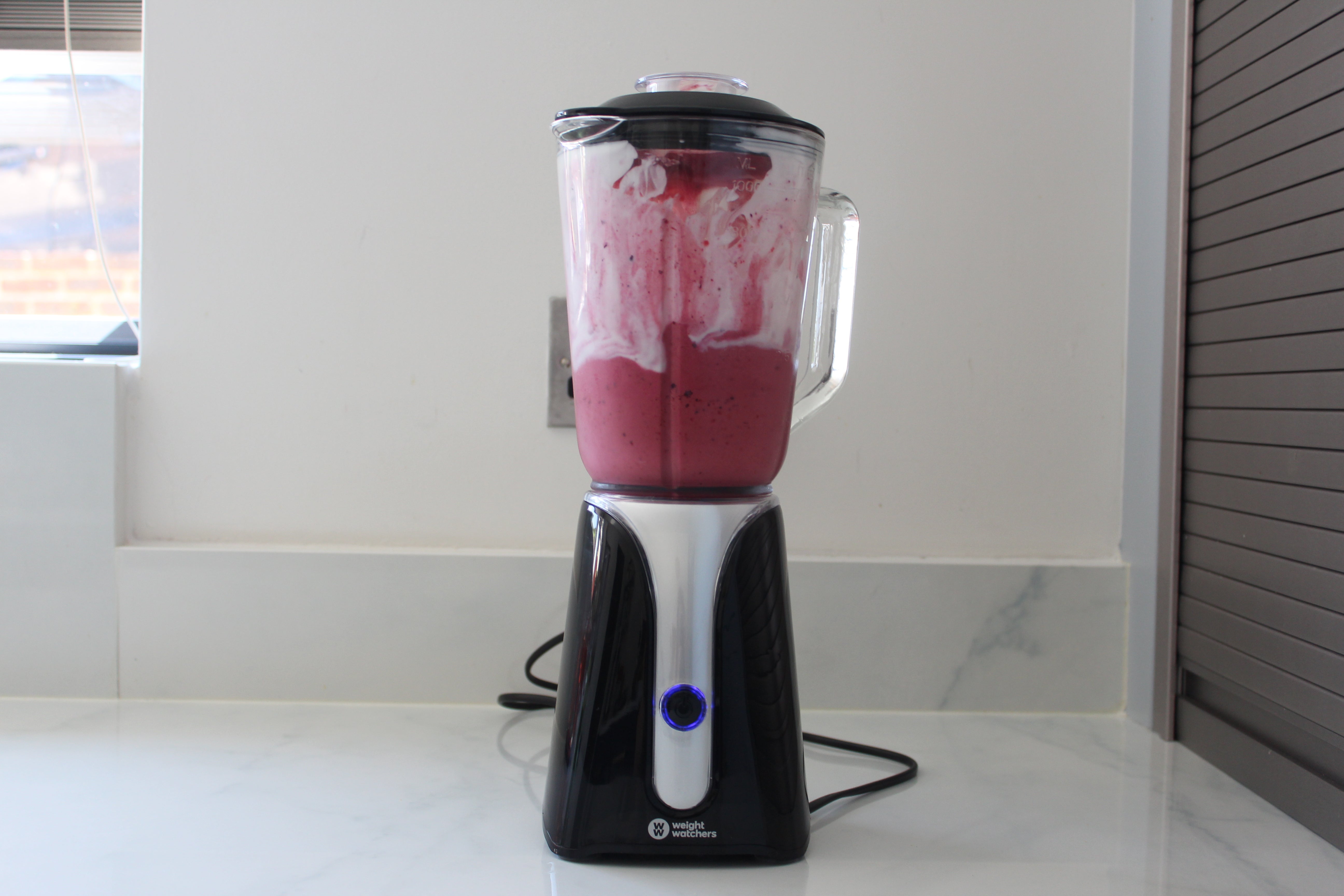 Since the Blender To Go isn’t dishwasher safe, I had to clean the parts by hand. While it was made easier by the blade unit detaching, the knives proved difficult to clean around thoroughly – a dedicated brush would have been useful.

Why buy the Weight Watchers 2-in-1 Blender To Go?

While it isn’t big or powerful enough to replace a full-sized blender, the 2-in-1 Blender To Go is an affordable option for those keen to start making smoothies. Its compact size makes it ideal for space-poor kitchens, house-shares and solo households, too.

The machine itself doesn’t feel especially robust, so would suit light use more than a daily habit, and its inability to handle hot or frozen food limits its potential.

However, if all you want is fruity drinks on demand, it’s an economical option.

Basic but could be a good fit as a budget blender.