After the hype around We Happy Few’s initial reveal a few years ago, a lot of people were disappointed to discover that it was a procedurally-generated survival game. The world presented to us was brimming with personality and possibilities that many felt would be squandered on an open-world survival title. Compulsion Games has taken this criticism on board, stripping back the survival mechanics to focus on linear, story-driven missions and character interaction. But is everything tickety-boo or do we have a rotten Downer on our hands?

Set in the aftermath of an alternative version of World War 2 that didn’t go quite our way, We Happy Few tells the tale of Wellington Wells, a small British town whose inhabitants are all doped up to their eyeballs on a drug called Joy. This drug causes a state of constant euphoria, representing an exaggerated expression of the British ‘stiff upper lip’ mentality. Meanwhile, the outskirts of the town are populated by Downers, miserable souls who have been banished after they stopped taking the wonder drug. 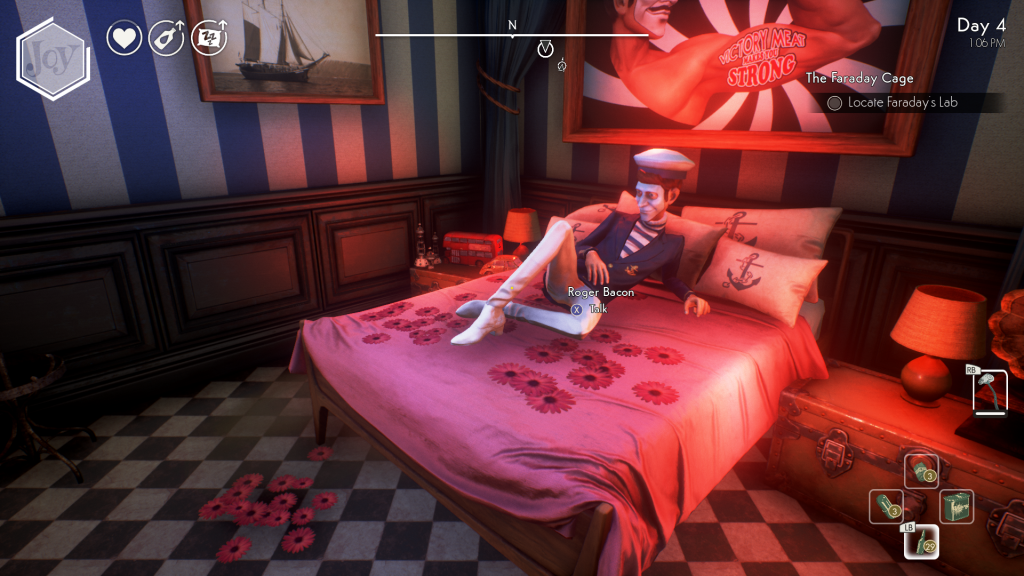 Right off the bat, We Happy Few panders to the classic self-stereotype that we Brits have of ourselves as the valiant underdog – an idea it will masterfully dismantle over its 40+ hour story campaign. The campaign is split into three chapters, each following the exploits of a different citizen of Wellington Wells. Each of the three characters has their own motivations, but they are all tied together by themes of regret and redemption.

Arthur is an unassuming everyman who seeks to escape the town and reunite with his younger brother, while Sally carries a secret that must never get out. Ollie is haunted by the ghosts of his past, but because of his drug-addled memory, he’s not even sure what those ghosts are. Throughout their stories, the characters’ paths cross and you’ll often experience these meetings twice, seen from both perspectives. 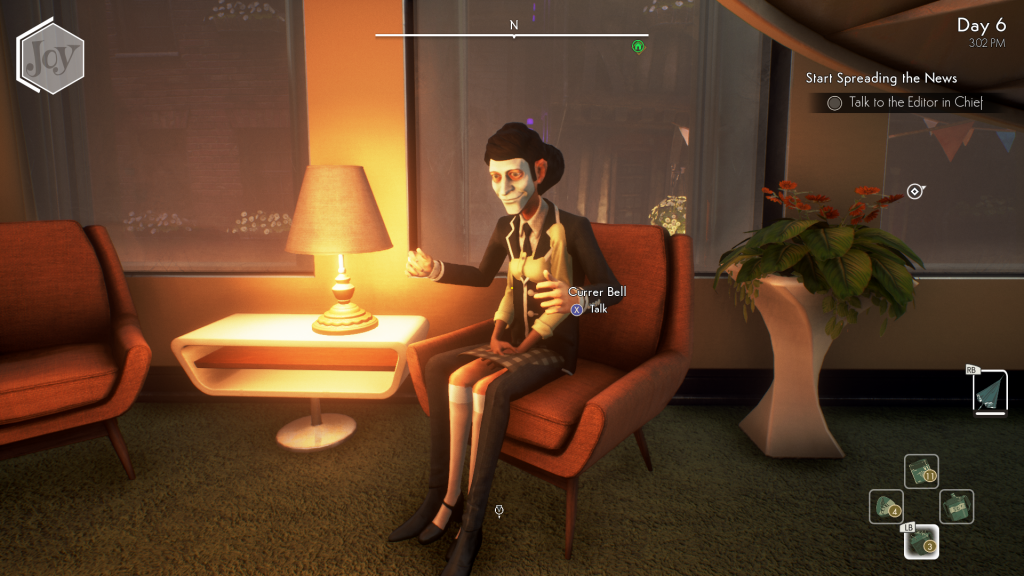 One of We Happy Few’s unique storytelling quirks is that the details of these encounters will change depending on who is remembering it. The conversations between Arthur and Sally play off this unreliable narrator concept exceptionally, with each character’s version of events portraying the other as the wrongdoer while never being clear as to who, if anyone, is remembering things correctly.

Comparisons to Bioshock are difficult to avoid here, which may seem unfair on the tiny team at Compulsion Games. The visual styling shares Bioshock’s exaggerated body shapes, but takes its major inspiration from the 1960s, with mod dresses, groovy tunes and a colourful palette. 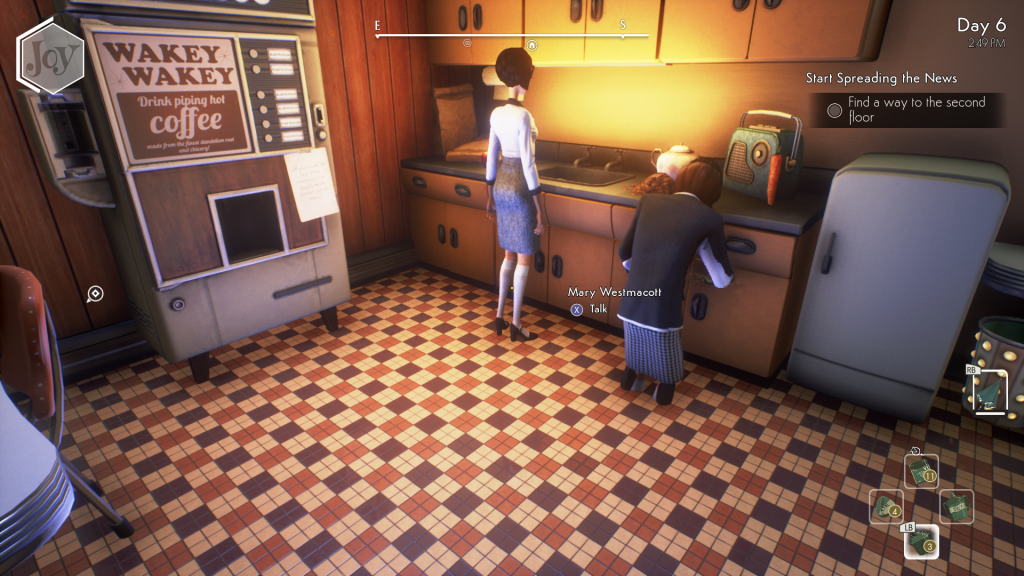 The Bioshock comparison isn’t just skin-deep though, as much of the gameplay design has taken inspiration from 2K’s oceanic adventure with a healthy mixture of exploration, stealth and brawling. The melee combat feels especially familiar, although there is a bit more mechanical depth on offer as you’ll have to manage your stamina in combat encounters while blocking and shoving your opponents as required.

Melee is a larger part of the game than Bioshock’s offering. Weapons come in all shapes and sizes, usually with a delightful British flavour to them – you won’t find any baseball bats here. In England, we play cricket. Using the game’s crafting system, you can throw together some ridiculous combinations, including weapons like the Spitfire and the ‘Just not cricket’ bat – that’s a cricket bat with nails in it, in case you were wondering. 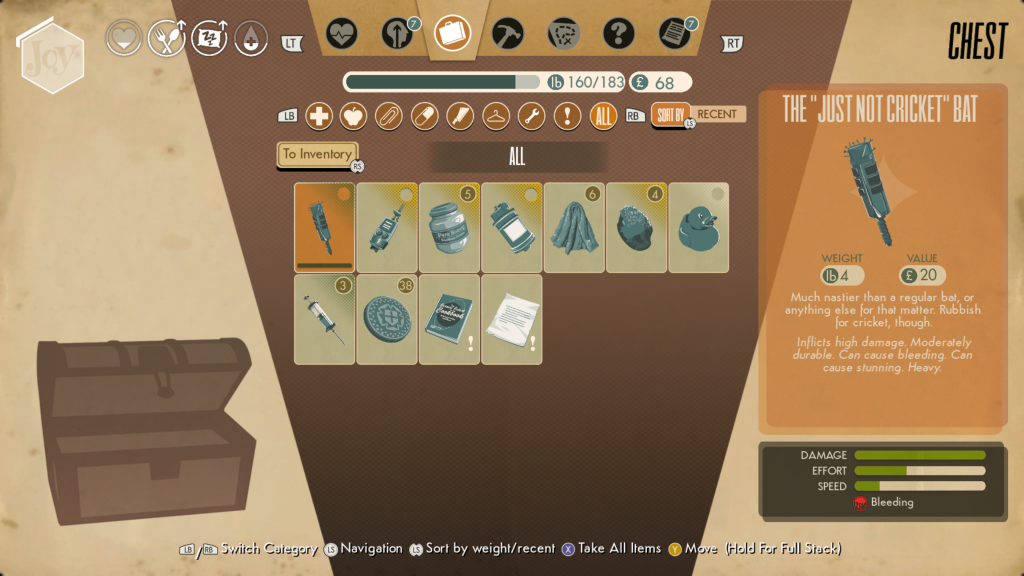 To supplement this crafting system, you’re required to scavenge every random knick-knack and bit of old tat you find lying around, so you can glue it together to build the various weapons and gadgets. Sadly, most of the toys and trinkets on offer feel superfluous. You’ll rarely need to craft anything unless a specific mission calls for it as you’ll pick up an arsenal of weapons from the Bobbies you best in fisticuffs.

Each character also comes with their own mechanical quirks. Ollie was an army boxing champion, so he hits like a truck, whereas petite Sally is incapable of knocking out foes without the use of sedative syringes. Ignoring the obvious (and slightly distasteful) gender stereotyping going on there, this does provide some variation in play, as tactics that worked perfectly well for one character are useless for another. 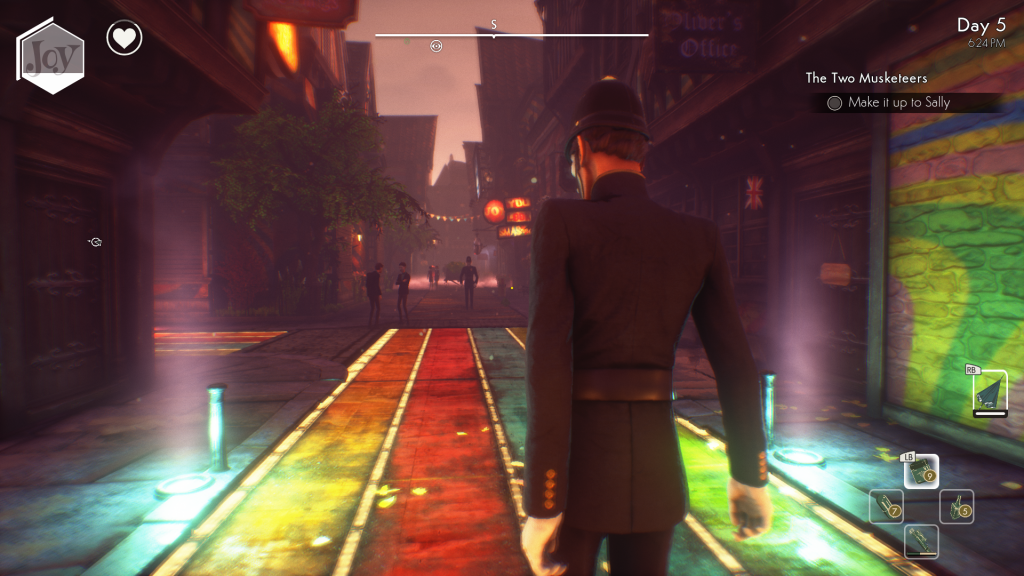 We Happy Few’s story unfolds as a linear progression of missions, many of which take place in bespoke locations. It’s here that We Happy Few shines. The narrative-driven missions delve deep into the lore of the world and the backstories of the characters while presenting unique gameplay opportunities beyond the basic sneaking, survival and combat that the town proper has to offer. During these missions, We Happy Few puts out enough standout moments to populate several great games.

Unfortunately, these highlights are interspersed with an unnecessary amount of drudgery. Many of the missions require specific items or crafting materials, but you’re often left at the mercy of Lady Luck as to how quickly you can find these items – I spent over an hour looking for the materials required to craft a gas mask. These diversions into survival and crafting fit the original premise of We Happy Few, but they bring the story’s pacing to a screeching halt. There are similar issues with the survival aspects too. Your character must eat, drink and sleep – or suffer a penalty to their combat prowess. But these systems rarely provide a challenge. Food and drink are plentiful, and you can always fast-travel to a safe house if you need to sleep, so managing these stats becomes little more than busywork. You also have to make sure your outfit and behaviour are in keeping with the local aesthetic, or the neighbourhood will turn against you pretty sharpish. But again, these mechanics provide more irritation than challenge.

One of the most baffling design decisions is in the character upgrade trees. With only a few exceptions, the upgrades don’t offer any new abilities to the player, but instead focus on nullifying the game’s mechanics. There are upgrades to remove the negative effects of hunger, upgrades which allow you to break curfew, and even upgrades that reduce the negative effects of Joy. Rather than offer new ways to circumnavigate these obstacles, We Happy Few just gives you the ability to turn them off. 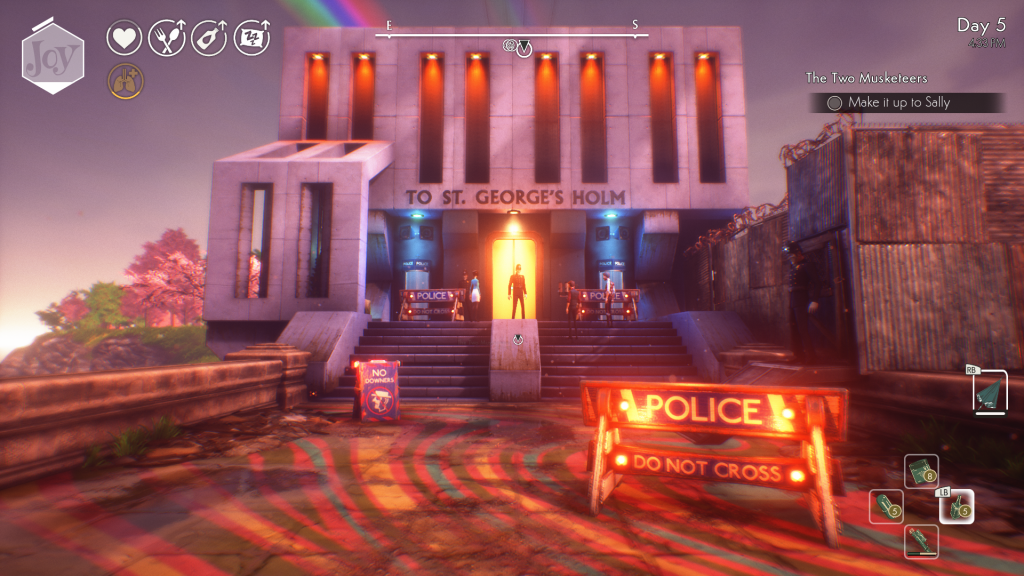 One of the few survival tactics that does work well is Joy, the euphoric drug that residents of Wellington Wells take to make the world’s troubles melt away. The town is littered with checkpoints and security devices that can detect if you’re off your Joy. There are usually ways to circumvent these measures, but without these tools you’ll have little choice but to pop a Joy and enter La-la Land.

In practice, taking Joy manifests as a saccharine filter over the world, painting the sky with rainbows and putting a spring in your step. You will have to manage your usage carefully as overdosing on Joy induces memory loss and blackouts, while coming off the drug leaves you with a hell of a comedown. Townsfolk will quickly notice your miserable disposition in this state, so you’ll have to hide until your comedown is over, lest you receive a good hiding from the local constabulary.

As a final point, I encountered more than my fair share of bugs during my playthrough, worth keeping in mind if you’re considering a launch week purchase. 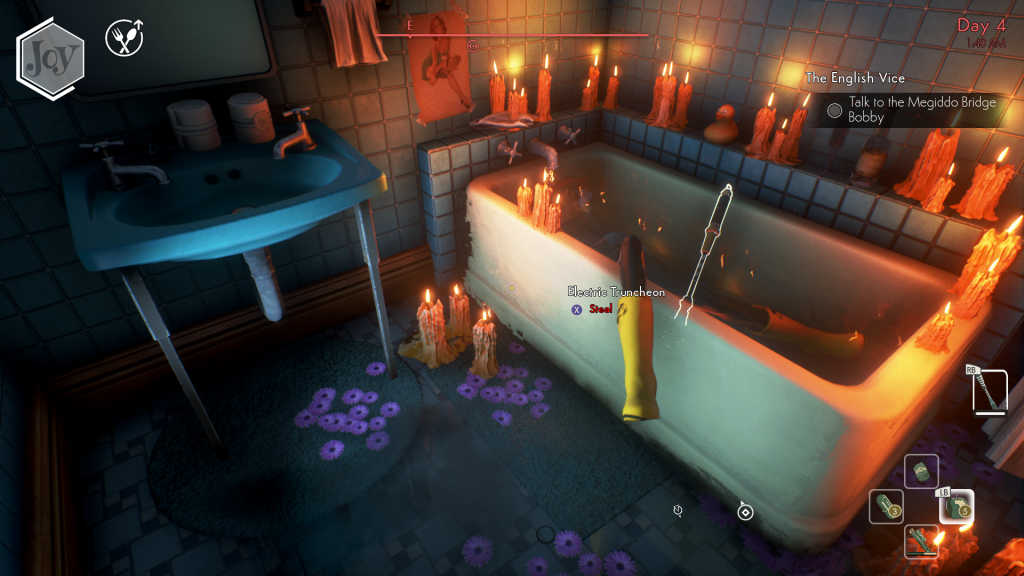 We Happy Few is a game filled with fantastic moments and wonderful stories, but they’re weighed down by token survival mechanics and tedious scavenging, an unfortunate hangover from the game’s survival origins. Despite this, there is so much to love about We Happy Few, and if you can forgive its missteps, you’ll find some powerful storytelling. In its highest peaks of ecstasy, We Happy Few surpasses its peers with ease and that’s no mean feat for a small indie studio. As they’d say on Countdown, it’s a risky seven, but I’m glad they went for it.