Available on Xbox One and PC
In just five minutes during Microsoft’s E3 conference, We Happy Few went from being a little-known indie title to one of this year’s most anticipated Xbox One games. It’s not hard to understand why. Here was a game with a unique retro sci-fi premise and its own distinctive visual style, and one that looked to all intents and purposes like a BioShock set in an alternate ’60s England. It was beautiful, strange and terrifying all at once; a sort of thinking man’s survival horror with a J.G. Ballard twist.

Perhaps the oddest thing about We Happy Few’s Xbox and Steam Early Access Preview release, then, is that it’s so very different from the game you might have had in mind.

The prologue sequence repeats what you saw in the E3 demo, establishing a world in which society has undergone some kind of collapse, and where the population is enslaved by a mood-altering drug called Joy. Your character, Arthur, works as a censor for the government in the town of Wellington Wells, redacting articles that might be critical or that share unpleasant truths, but then he has an awakening, dodges his Joy dose and all hell rapidly breaks loose. 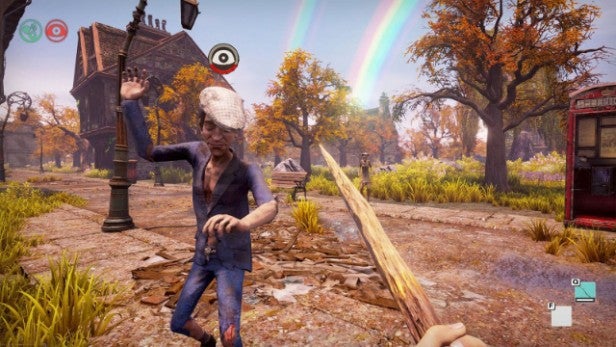 It’s a great start, but it leads to Arthur waking up in an underground safehouse beneath a rubble-strewn ghetto, where the Joy refuseniks – the Downers – live. And it’s at this point that We Happy Few’s real character emerges. This isn’t some carefully scripted, linear action adventure, but a game of stealth and survival set in procedurally generated areas. You have objectives, side quests and places that you need to reach, but there’s just as much emphasis on scavenging, crafting and avoiding the effects of thirst, hunger, tiredness and other ills.

At first, this comes as a nasty shock, not least because you’ll end up spending a lot of the early game trying to keep yourself fed, rested and watered, gathering food to eat and water to drink, then making sure you return to your safehouse hideout every night to sleep.

The starting area is full of overgrown, war-ravaged houses and weed-filled garden squares, while the creepy, masked citizens and policemen of previous trailers are nowhere to be seen; there’s just a bunch of samey-looking Downers muttering crazily or guarding the stashes in their tumble-down homes. 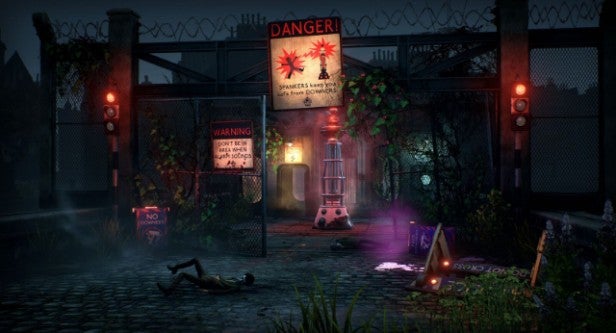 And the awful thing is that the basic survival stuff isn’t all that much fun. Your water, food and sleep gauges need refilling at a ridiculous rate, pushing you to keep on sweating the small stuff when you’d rather be engaging with the game’s distinctive world. Stealth seems hit-and-miss, while combat sees you trying to fend off groups of feral, tattered souls with pointy sticks, makeshift clubs and – if you’re really lucky – a cricket bat.

You’ll be glad that permadeath is optional and that you can toggle a last-minute reprieve, or second-wind feature, on or off, because while the combat feels soft and floaty, you can actually die a lot. Those Downers might be malnourished and weak, but they’re easily angered and deadly in small groups.

Give it time and We Happy Few begins to develop its own rhythm, as main missions, such as crossing the bridge to escape the ghetto, lead to a variety of side missions and smaller objectives, where you’ll find opportunities to salvage blueprints and materials to build slightly better gear. You learn that clothes maketh the man, and that how you present yourself matters.

Within a couple of hours you’ll be infiltrating the areas of Wellington Wells where the regular, Joy-guzzling citizens live. Hopped up on Joy, masks on their faces, a spring in each step, these guys are every bit as bonkers as the Downers and every bit as menacing, ever keen to club you to death if you show signs that you’re not on your Joy. Wander around at night and you’ll find yourself sneaking past the equally crazed policemen and dodging a poisonous smog. Death is never too far away, especially when you have no Joy to work with. 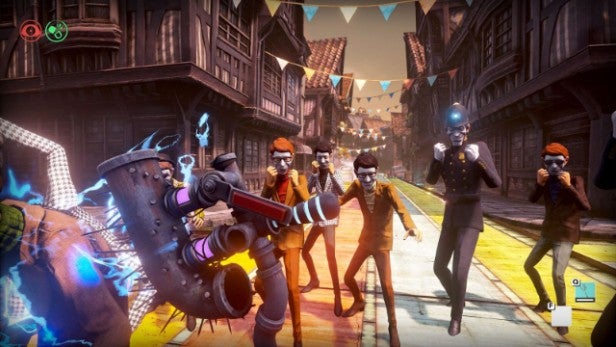 Right now, there’s something about We Happy Few that’s not quite satisfying. It’s incredibly stylish, with great character design, fantastic lighting and a weird ’60s feel that’s straight out of The Avengers TV series and The Prisoner. Yet, with some rough-looking textures, pop-in and the drab, repetitive zones you start off in, it doesn’t always play to its strengths.

The same applies to the gameplay, where there aren’t enough hooks or story elements to carry you through – just moments of strong, occasionally tense atmosphere. There’s a sense that a fantastic setting is being wasted. Endlessly repeated chunks of dialogue don’t exactly help.

But then – and this is important – We Happy Few is an Early Access game. Arthur is only one of several protagonists with several stories, so you’ll be able to explore the world from other perspectives. Even his tale seems unfinished, with the basic thread and background lore in place, but not all the content complete by any means. Think of this preview as a chance to try the mechanics and Wellington Wells on for size, not as a polished slice of the final game.

The biggest danger We Happy Few faces is that it might not turn out to be the game we want. In this Early Access Preview it’s sometimes tense, brilliant and exciting, but also drab, repetitive and a little too much like hard work.

But then, the beauty of Early Access is that it gives the game time to develop and evolve, hopefully focusing more on what’s brilliant about Wellington Wells and the stealth-action gameplay, and less on the stuff that doesn’t quite gel. I genuinely hope so, and hope that We Happy Few’s finished stories do the setting justice. It would be a shame if we happy few who love the style became a more disgruntled bunch.