What is the WD My Cloud EX2 Ultra?

The My Cloud EX2 Ultra is a NAS with room for two 3.5in hard disks, priced to compete with cheaper models from rivals such as Synology. It has strong file transfer performance, and is particularly easy to set up and configure to share files across your home network and the internet. 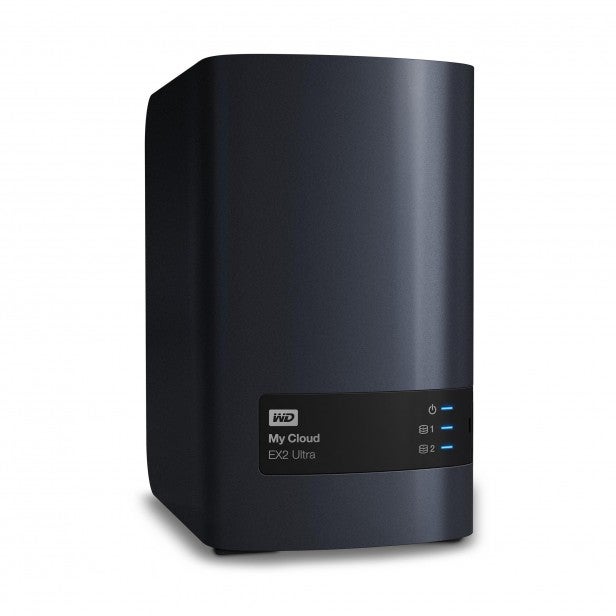 Considering these disks would cost around £290 to buy separately from the NAS, there’s no real cost benefit to buying a version with preinstalled disks.

Bear in mind that a sensible approach with a two-disk NAS is to set it up as a RAID 1 array, where data is mirrored across both disks. This means that if one disk fails you won’t lose any data, but you will lose half your available storage capacity.

The My Cloud EX2 Ultra is a smart-looking NAS with a clean design. There’s nothing on the front, and two USB3 and an Ethernet port on the rear. I would have liked a power button, so I didn’t always have to shut it down from the web interface.

If you do need to fit or replace disks, it’s an easy process. A quick button press opens the top of the NAS, you unscrew a bracket and use a plastic tab to pull the disk out. It’s not quite as easy a job as with Synology’s models, but there’s so little in it to make any real difference.

Setup is simple. Once the NAS is plugged into your network and switched on, you go to mycloud.com/setup to find it on your network. The setup application then walks you through choosing a password for the administrator interface and setting up My Cloud accounts, which lets the NAS’ users access its contents from outside your network. 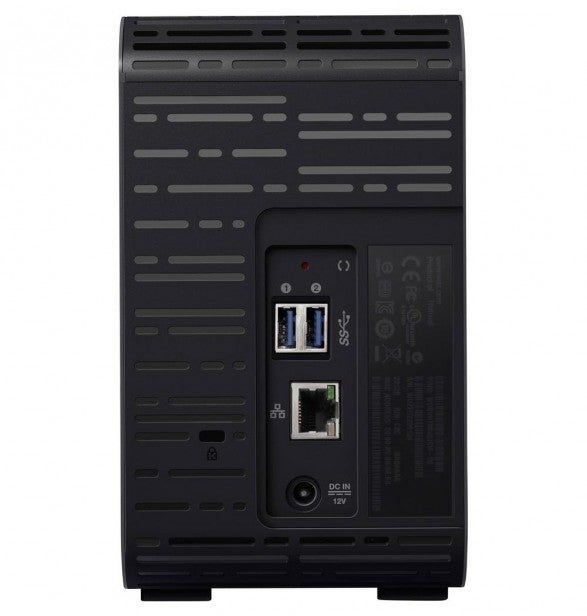 Each of the EX2 Ultra’s users will need to sign up for their own My Cloud account, which will let them access any shares on the drive to which they have permission. This was the only part of the setup process that gave me trouble, throwing up a couple of ‘unspecified errors’ when I tried to create multiple My Cloud accounts. This wasn’t really a problem, as it’s simple to set up these accounts later in the NAS web interface.

If you’re used to using NAS devices from manufacturers such as Synology or QNAP, you may find the EX2 Ultra’s interface a bit of a shock. Instead of something that looks like a desktop operating system with windows and icons, you get tabs and sidebars, a bit like a router interface – if at least a particularly clear and friendly one. 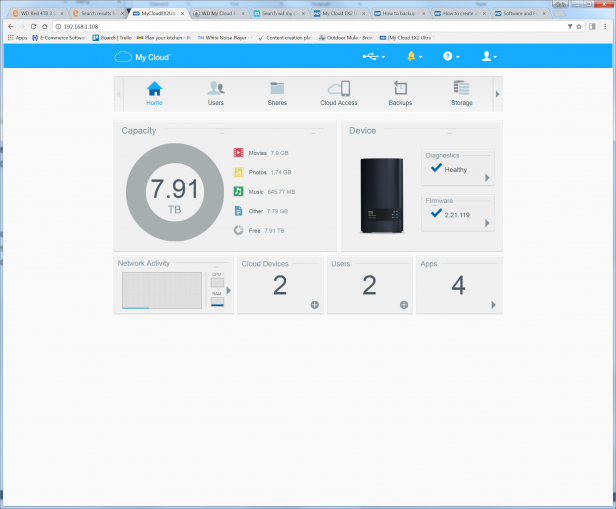 The Home screen gives you an overview of the NAS’s status, and usefully splits used storage into categories – Movies, Photos, Music and Other – so you can see if your holiday snaps are hogging all the space. The Users section makes it easy to add users, configure passwords, set who can access which network shares and assign disk space quotas, while creating and configuring network shares couldn’t be easier with the options in the Shares section. Plug in a USB disk (FAT, FAT32, NTFS, HFS or EXT2/3/4) and it pops up as a network share, without you having to do a thing.

When it comes to this kind of basic administration, this is the easiest NAS I’ve used. It’s far simpler to organise your network shares and assign user privileges than on Synology’s operating system, for example. There was one section where I would have liked some more information, however. Out of the box my test NAS had its two drives configured as separate volumes, but it’s more sensible to set them as RAID 1. This mirrors your data across both drives, so if one dies you won’t lose any data. The interface gives you this information, which is useful. 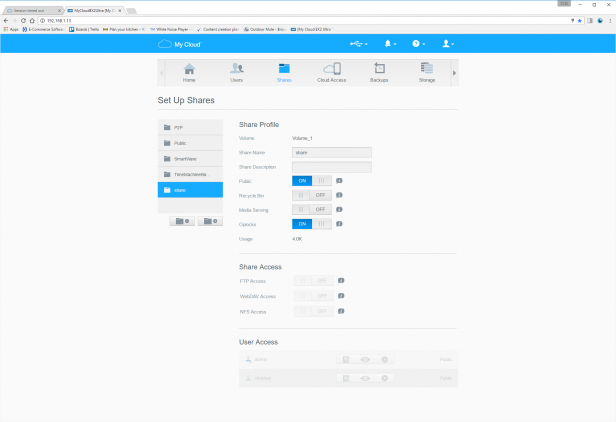 However, what it doesn’t tell you is that switching to RAID 0 or Spanning is a risky business. These drive modes can give you a speed boost (RAID 0) or make both disks appear as a single large drive (Spanning), but if one disk breaks you will lose all your data. I would have liked this risk to be spelt out in enormous letters during setup.

The EX2 Ultra may be seriously easy to use, but this comes at the expense of flexibility. Synology and QNAP NAS drives are awash with apps, from mail servers to personal wikis to CCTV, and have software stores to help you add more functions. The EX2 Ultra is much more limited, with Barebones apps for downloading files from HTTP and FTP servers and over Bittorrent, and a very simple file viewer. 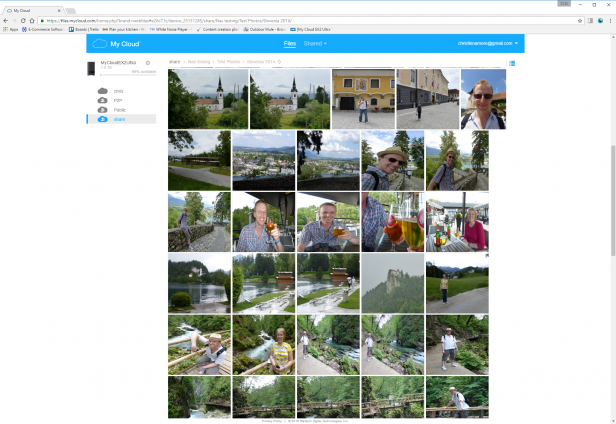 These work well enough, but don’t offer the same desktop application experience you’ll find with Synology’s powerful apps. There is a button to add third-party apps, but the selection is pretty minimal; just 16 apps listed, compared to over 100 for Synology’s devices.

One feature that’s particularly easy to set up is DLNA/UPnP media streaming. Just turn on media streaming in Settings, then select any of your shares and flick the media streaming switch, and you’ll be able to access media from that share from a UPnP client on your network. I had no problem streaming videos to Windows Media Player and VLC on Android, or photos to BubbleUPnP. Music files also worked fine, with the usual UPnP limitation that songs with more than one artist (such as Get Lucky by Daft Punk feat. Pharrell Williams) will be listed separately from the rest of the album. To fix this I normally need to remove all featured artists from songs.

This isn’t the first NAS I’ve seen to let you access your files from outside your home network, but it’s certainly the easiest to set up. Each user on the NAS can have their own My Cloud username and password, and once this is set up (watch out for the initial setup email ending up in Junk mail) you can log in at mycloud.com and browse and download everything stored on the NAS. You can upload files, too.

This all works fine, as long as you’re aware of the service’s limitations. There are no fancy extras, such as music streaming, and you can’t select multiple files to download at once – you have to download the parent folder as a zip file. The photo viewer works well, giving you a thumbnail view and a preview that you can flick through with your keyboard’s arrow keys. It’s a perfectly serviceable way to access your home files from anywhere. You can get more features, such as music streaming, by installing the WD My Cloud app for Windows. 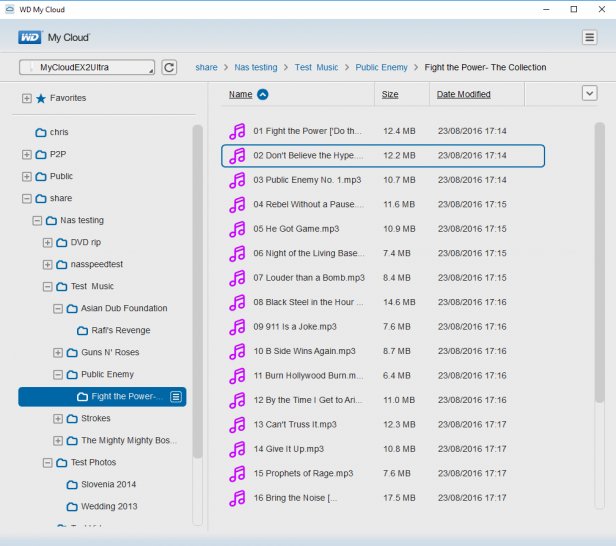 WD also provides the My Cloud app for Android and iOS. This gives you a clean interface to browse folders on your NAS, or you can select Photos, Music or Videos to view only files of that type. Music files will stream over the internet, as will video files if you have a compatible video player installed (such as VLC). The app will also upload photos and videos straight to the NAS. It’s simple and does the job.

Should I buy the WD My Cloud EX2 Ultra?

If you need a NAS simply to share files on your home network and over the internet, the WD My Cloud EX2 Ultra is hard to beat. I loved its clean interface and the fact that it was so easy to set up users, shares and internet access. Its app ecosystem is nowhere near as developed as Synology or QNAP’s, however, so if you want your NAS to act more like a mini computer than a simple network hard disk, the EX2 Ultra won’t be for you.

An easy-to-use NAS that’s great for high-speed file transfers and sharing data over the internet, but those after powerful extra features should look elsewhere.