Given its laser-like consumer focus it is important WD nails the setup process and thankfully it has. You simply plug in the EX2, connect it to your router, visit wdmycloud.com in your browser and follow the setup wizard. We have some issues with the fact the default ‘admin’ username doesn’t have password (something many may miss) but it is otherwise hard to go wrong. You are prompted to setup shares, download mobile apps and set user passwords in a process that takes less than five minutes.

It is less straightforward if you bought an unpopulated EX2. Here you have to fit your own (matching) drives and, as mentioned, we found the drive bay mechanism to be somewhat flimsy. In fact we popped off the turnkey between the drives several times before managing to gently ease it out. WD needs a more sturdy system in future. Furthermore there is no warning about fitting unmatched drive capacities. RAID1 balances to the capacity of the smaller drive, so users (understandably) not up on their RAID configurations should be alerted to this before potentially wasting capacity. 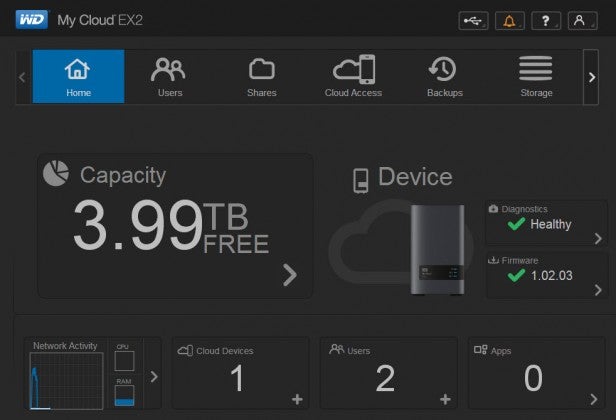 Physical quibbles aside once you get to the software side of things there is much to admire. The browser-based UI (above) hasn’t evolved much since the launch of the original My Cloud line last year, but there was little to fix and we’re big fans of its intuitive dashboard layout. The homepage shows the status of the drive (storage, health, firmware, connected devices and users) while tabs along the top take you to main categories likes Backups, Cloud Access and User preferences.

Admittedly it isn’t as powerful as prosumer UIs, but then again it isn’t meant to be and it has all the functionality the vast majority of its target market could need.

Android and iOS apps haven’t been updated a great deal since the My Cloud launch either, but they remain easy to use and essentially ape the functionality of similar Dropbox/Drive equivalents. Where we do still have concerns though is the PC app (below). Again there has been a lack of development, but it wasn’t great to begin with and is called upon to replace Windows Explorer when you require remote access. The UI is a messy Windows Explorer/Mac OS hybrid, there’s no right click recognition (update: right click support for content menus now works on the latest version of the software) and media streaming proved problematic with content occasionally downloading rather than streaming. WD has updated this software a few times since the original MyCloud appeared, but it still has some way to go yet. 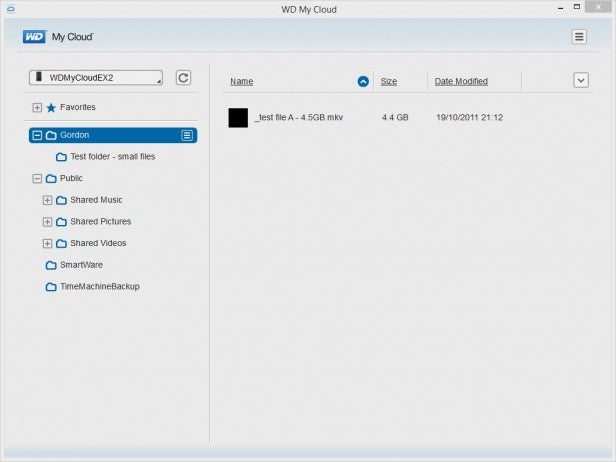 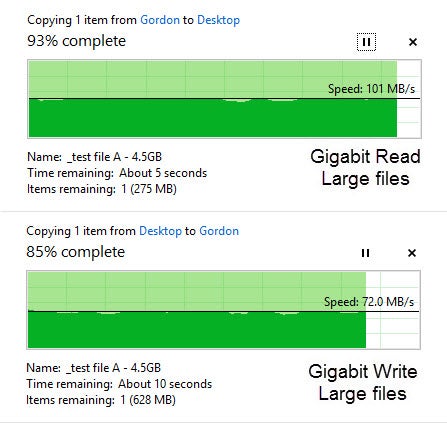 Happily things improve when it comes to performance. Copying large files across the network the EX2 managed consistent read and write times of 101MBps (808Mbps) and 72MBps (576Mbps) respectively. This is vastly better than the underpowered EX4 and a little faster than the speedy single drive My Cloud.

Write speeds don’t match the Gigabit challenging rates of more expensive NAS like the Synology DS414 and Netgear ReadyNAS 314, but they are a match for the pricier two bay Synology DS214Play and likely to be fast enough for the vast majority of its audience. 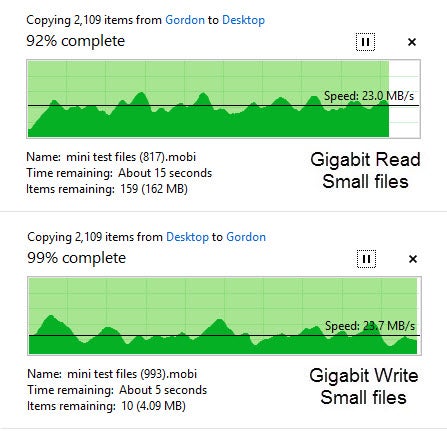 It is a similar situation for smaller files. Transferring our 2GB folder of over 2,000 files is a real CPU crusher and the virtually identical average read and write transfer rates of 23MBps (184Mbps) and 23.7MBps (189.6Mbps) show it to be the limiting factor, not the nippy WD Red drives inside, which managed speeds of around 40MBps in the DS414. That said this test is extreme and the EX2 outperforms the disappointing EX4 and should again prove fast enough for most.

Lastly, the EX2 has a major win when it comes to noise. Its fluctuates between a largely inaudible 20-25db at one metre, far quieter than the noisy EX4 and Netgear’s frustratingly loud ReadyNAS line and is on par with Synology’s current DS range which is the quietest we’ve tested to date. 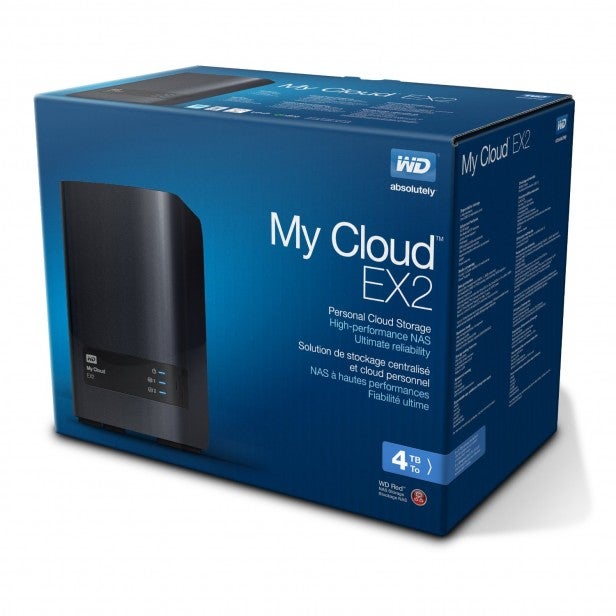 Should I buy the WD My Cloud EX2?

With compelling prices of £199 (unpopulated), £299 (4TB), £359 (6TB) and £479 (8TB) the answer is a qualified yes. Personally we’d opt for the significantly cheaper Netgear ReadyNAS 102 for its wider functionality and expandability, but the 102 has much slower write times and is noisier.

Ultimately, what WD has made is a consumer friendly NAS with decent pricing and some very useful, though far from unique, remote access. It looks good, is fairly fast and very quiet. Furthermore, being able to sell the EX2 with its own drives means buying it with storage is better value than picking it up empty and buying your own. Given the lack of easy expandability you’d be better off buying bigger at the point of purchase in any case and not looking to upgrade for a long time.

If you’re a newbie to NAS storage and aren’t hugely fussed about advanced features then this is a good option. But don’t be fooled into thinking this is a cut-price alternative to heftier, more advanced NAS drives. It isn’t.

An interesting option for NAS novices, but the My Cloud EX2 isn’t without a few issues we’d rather it didn’t have.