The one problem with most sat-nav devices is that you need to constantly keep them up to date. Roads close and new ones open, layouts change and speed cameras mushroom like the spores of some particularly virulent fungus. If you don’t upload map updates to your device you’re likely, at some point, to end up being instructed to go the wrong way down a one-way street or to take the long way round when a much faster route is available. That’s why I like TomTom’s Mapshare feature so much – it allows users to update each other on major road changes for free. And it’s also a reason why ‘live’ phone navigation software such as Telmap, and Wayfinder 8 – on review here – work well. 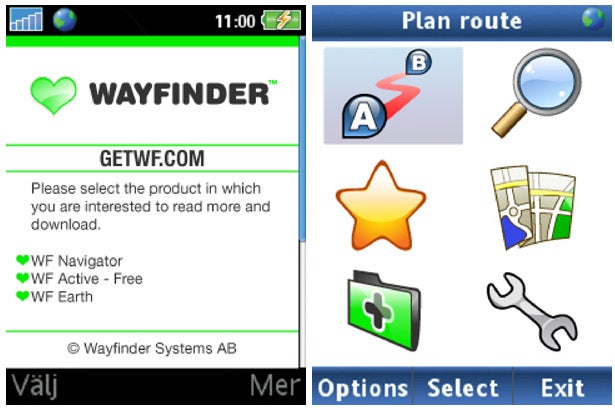 Instead of storing all the map data locally, Wayfinder’s maps are kept on a server and, just like Google maps, portions of it are downloaded as and when requested. Not only does this ensure that the maps are kept bang up to date automatically, but also that storage requirements are minimal. All you need to install on your phone is the application, so the rest of your space – especially critical if you own a phone with no expansion slot – can be dedicated to video, picture and music storage. Route calculation, too, takes place entirely on external servers, rather than relying on the possibly low processing power of your handset. 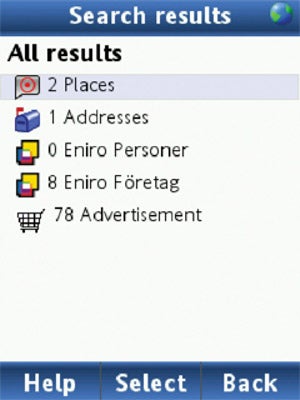 It’s available on a wide range of handsets too – not just Symbian S60 and UIQ devices, but also Windows Mobile 6 Professional handsets and Blackberries too (you’ll find the full list on the Wayfinder website). And if you find you don’t like the thing, it won’t necessarily have cost you the earth – the cost of a 12-month subscription is £40 and for three years’ worth it’s a mere £48.


Furthermore, it’s stuffed with clever features. Log into the companion website – MyWayfinder – and you can add ‘favourite’ destinations without having to punch them in laboriously on your phone’s numeric keypad. The application on your phone will then sync with the site and download the locations for use locally. There’s a Facebook app too that you can use to publish your location, and a Google Earth tracking utility too. Switch the latter on (and the tracking mode on the phone) and all your movements from the past week will be recorded in a downloadable KML file with the track overlaid onto the map. What’s more, you can also download portions of the map from the MyWayfinder website and install them locally – useful if you know you’re venturing into an area with a weak mobile data signal.

Of course, the theory behind Wayfinder sounds like a brilliant idea, but what’s it like in practice? Well, for basic point-to-point navigation it’s a pretty good solution. I particularly liked the voice instructions, which are repeated, then repeated again and repeated again for good measure as you approach each and every junction. It can get a little irritating for passengers, but it’s worth it for the driver, who’s unlikely to ever miss a turning because one of the kids in the back was having a tantrum. 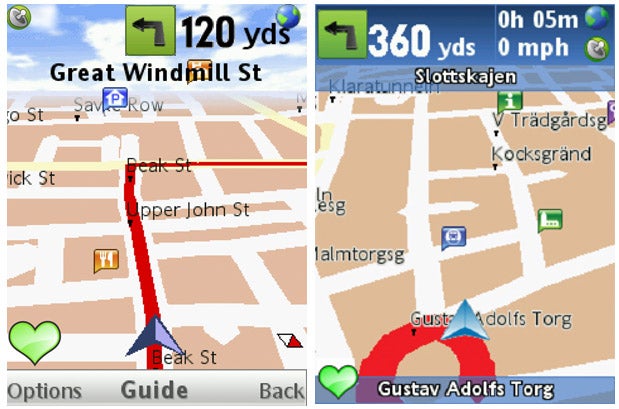 The maps themselves are extremely clear in both 2D and 3D modes – even on the screen of a relatively small phone such as the Nokia N82 I used for testing. The route layout is clearly indicated with a thick red line and POIs, such as petrol stations, pop up as colourful, easy-to-spot callouts. Of course, you don’t get as much information thrown at you as with a dedicated device – there’s no ETA, distance remaining or even the name of the next street here – but the essential info is clear and doesn’t clutter the screen. A next turn icon is displayed in the top right corner (or left one depending on the phone) alongside the distance to that turning and an icon to indicate satellite signal strength. Beneath these you get an indication of the current road. Clearly a lot of thought has been put into design of the map display.


But there are weaknesses. The most obvious is that you can’t do multi-point routing. This was a failing I pointed out the last time I looked at Wayfinder, and it’s a serious problem that still needs to be rectified. This is a much more important feature than either Facebook or Google Earth tracking, so why it’s been implemented, I’m not entirely sure. Also missing – and another important one – is manual rerouting. Wayfinder will recalculate your route for you (and quickly) when you stray off track, but you can’t tell it to find the best route around a roadblock or traffic jam just ahead – you have to guess that getting off at the next right/left turn is the best way to go.

Other weaknesses include the perennial problems of live navigation that you’re relying on your mobile data connection (the reliability of this will vary, depending on your network and where you are in the country) and the Wayfinder servers staying up. To be fair, Wayfinder does attempt to circumvent this potential stumbling block by downloading blocks of mapping and caching it in the phone’s memory, so you always have the some mapping data to work with. It offers those map downloads too. But if you stray off track too far and lose your data connection (I occasionally found my T-Mobile connection interrupted, even in London) you’ll be stuck. It’s also not going to be a realistic proposition to use the product abroad, with mobile data rates being such a rip-off, though this is not the fault of the Wayfinder product – blame your mobile operator for that. 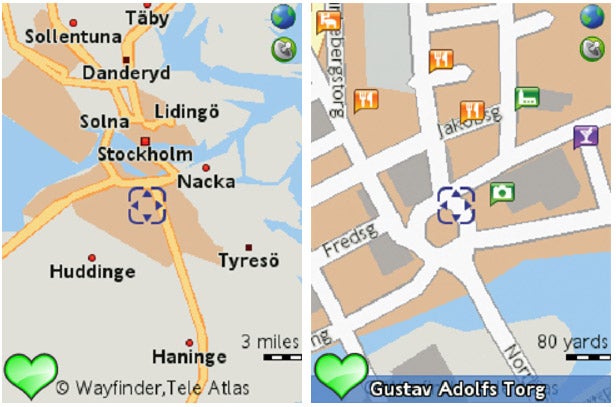 What you can blame Wayfinder for is the cost of added extras. Where the main product is reasonably priced, the speed cameras and traffic information features are not. Live navigation software is the ideal way of transferring such data and keeping it up to date reliably – it can be downloaded at the same time as route information – but you have to pay a hefty premium if you want the privilege, with annual speed camera updates costing £28 and traffic information another £20 per year.


It’s worth noting that Telmap and CoPilot Live 7 (the latter is my current phone navigation application of choice) both include free traffic information and that Telmap’s rolling contract, which allows you to pay just £5 for one month of navigation and then opt out after, is much more flexible.


So for the ultimate in flexibility, traffic, European mapping and speed cameras, Wayfinder is never going to be able to compete with full-blown dedicated devices such as TomTom’s excellent range of sat-navs. And it’s not as good as CoPilot either.


But I think that, despite the lack of free traffic info it is – just – a better bet for live navigation than Telmap. It has more innovative features and better flexibility, and at £48 for three years of map updates, it works out far cheaper in the long run. If you want a basic navigation product that doesn’t suck the storage potential out of your phone, it’s the best product of that ilk I’ve used.