Waterfall Audio is not a well-known name in the UK but the French company has been pushing the speaker design envelope for the last 15 years. It specialises in creating innovative, arty speakers for home cinema and hi-fi use, and one of its latest audio brainwaves is Hurricane Evo, a set of speakers fashioned from a single panel of glass. 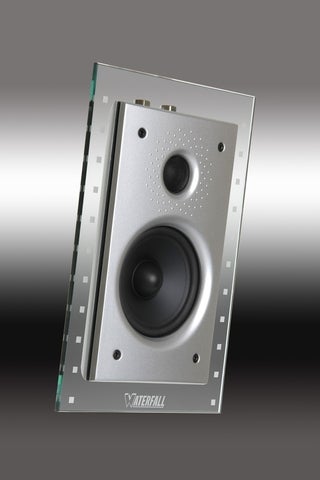 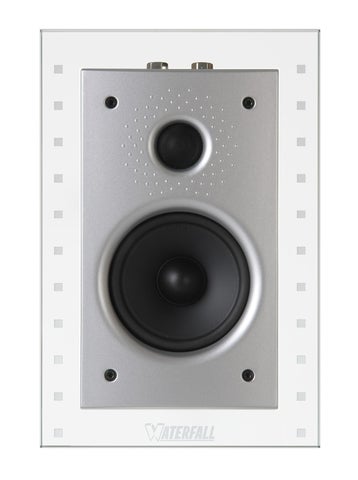 Waterfall offers these as part of its ‘Ultra Flat Line’ and they’re not kidding – at 8cm deep they’re perfect for wall-mounting either side of a similarly stylish flatpanel TV. The 2.1 system we have on test includes a pair of Hurricane Evo speakers and the company’s High Force Multimedia (HFM) 2.1 subwoofer to add extra low-end grunt to movie playback. There’s a choice of three other subwoofers that you can opt for instead – HF1, HF2 or HF3 – or if you prefer you can piece together a 5.1-channel system with five Hurricane Evos and any of the subs, but at around £800 a pair you’ll need a fairly healthy bank balance… 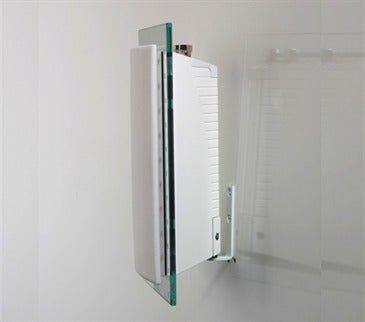 For that money though, you get an extremely well crafted set of speakers. The use of glass obviously makes them more fragile than, say, your average floorstanders, but the toughened glass does feel remarkably sturdy. The glass panel is sandwiched between two parts of a robustly built die-cast aluminium speaker enclosure – the tapered rear section sports a pair of high-quality silver binding posts on top. Two grooves run down the entire length of the speaker at the back, allowing you to channel speaker wires inside them (Waterfall sells cables specifically designed to fit inside). At 280 x 190mm they also won’t take up much wall space. 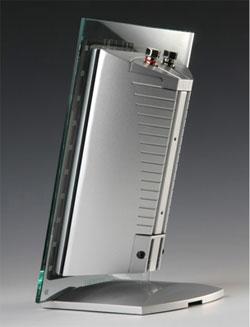 But for all their originality, we can’t say that we were completely blown away by Hurricane Evo’s design – they’re certainly striking and distinctive, but there’s something about the tacky squares running down each side of the glass panel and the raised dots around the tweeter that makes them seem slightly dated. But they do look much classier with the grilles attached, and in any case, beauty is in the eye of the beholder.

However, there’s been no attempt to match the subwoofer to the speakers, certainly not in our test package, but that won’t necessarily matter if you hide it away in a corner. And that aside, it’s not a bad-looking bass box, sporting a sleek black finish with an eye-catching silver semi circle on top. We’re also highly impressed by the rugged build quality. 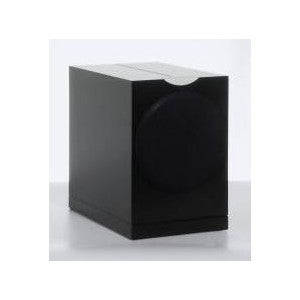 The speakers come in a choice of three colours – white, black or silver – with matching magnetic grilles, or optional orange and green grilles to give your living room an extra splash of colour. There are two optional stands if wall-mounting isn’t your thing, both of which are available in matching black, white or aluminium finishes. 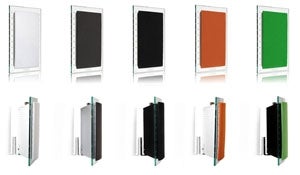 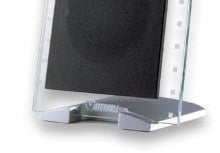 The £175 tabletop stand allows the speaker to tilt back, and when attached the cables neatly emerge from a hole in the back. There’s also an aluminium/glass floor stand, which is one for the more daring interior designers among you with its avant-garde approach – again, the cables can be channelled invisibly through them. For on-wall use, the speakers come with brackets in the box and installation appears fairly straightforward. 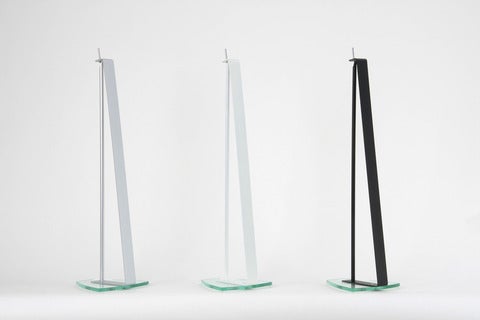 Every speaker brand seems to have its own flash-sounding speaker driver tech, and Waterfall is no exception. At play inside the two-way, closed design is a 20mm silk dome tweeter and 100mm mid/bass driver that use Atohm technology to deliver ‘an unprecedented level of performance for such a small volume speaker’, while its Heatstream technology provides high power handling by eliminating excess heat from the voice coil by coupling its neodymium magnet to the aluminium cabinet. As for the vital statistics, the Hurricane Evos manage an efficiency of 87dB and cover a frequency range of 100Hz to 28kHz.

The compact active subwoofer, which stands just 12in high, boasts a 120W amplifier for itself and 2 x 60W amplifiers for the satellite speakers. Classed as a ‘multimedia’ sub, it can be used with a PC, iPod or any other device instead of a home cinema system – simply connect the satellites to the binding post speaker terminals on the back of the sub, and connect your device to the 3.5mm or stereo cinch inputs. But when used for home cinema, you can connect the satellites and subwoofer to your AV receiver and control it that way. 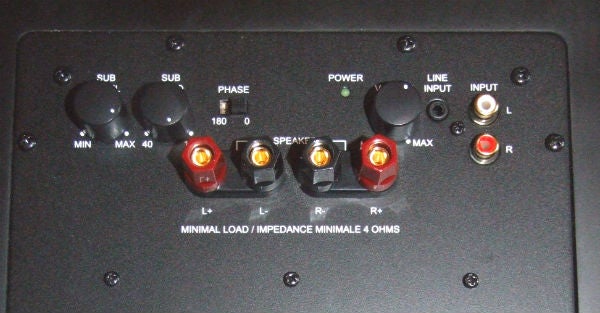 That’s why you’ll find two volume dials on the rear – ‘Volume’ and ‘Sub Level’. The former controls the sub and satellites when connected together, while the Sub Level just controls the sub’s output in a home cinema setup (although both appeared to affect the bass output in our home cinema setup). They’re joined by a phase switch and a crossover control dial (40Hz to 180Hz).

With a high price tag come high expectations and this Hurricane Evo system mostly lives up to them. We hooked it up to the Onkyo TX-NR609 and gave it the once-over with the criminally underrated Children of Men – what we got was a smooth and articulate performance, with pristine high frequencies, full-bodied midrange and tight low frequencies. It can’t quite muster the flat-out excitement and drive needed to really get the spine tingling during high-octane action scenes, but on the whole these elegant speakers deliver an aptly classy performance. 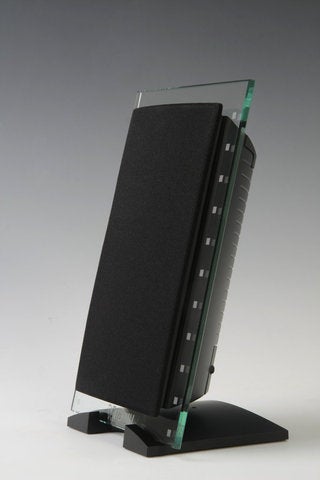 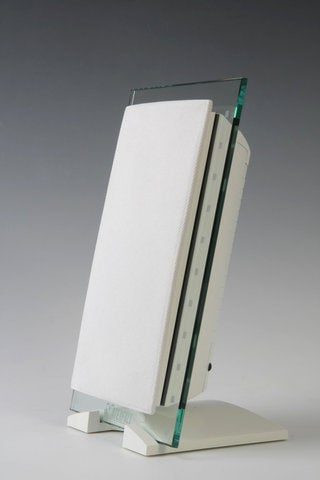 Its virtues are best demonstrated by the bravura coffee shop bombing at the start of the movie. The hustle and bustle of Oxford Street during the build-up is wonderfully detailed, from voices drifting in and out of ear shot to the buzz of car engines and rickshaws racing past. There’s a crispness and poise to these effects that reveals some very competent speaker tech at play. But when the bomb goes off it handles the dynamic shift brilliantly, going from quiet to loud in a flash with a taut and punchy blast that conveys a palpable sense of shock and devastation.

The good work continues as the movie progresses. Whenever Theo visits Jasper’s house in the woods, the subtle sound design is expertly handled – softly-spoken dialogue comes through loud and clear over the music floating in the background – but when the tranquillity is shattered by Jasper’s ‘Zen music’ or his unorthodox alarm system, the sub moves air with pleasing potency. The only criticism we can level is that the sub only makes its presence properly felt at these moments – we’d like to hear it get more involved during quieter scenes too.

Chapter 6 starts peacefully with tuneful birdsong but ends in a breathtaking ambush scene, with shouting voices, rasping motorbike engines, wailing sirens and tinkling glass thrown into the sonic melting pot with terrific clarity. Even without the presence of rear channels the two-channel sound is reasonably atmospheric, but we’d still like to hear a little more oomph. 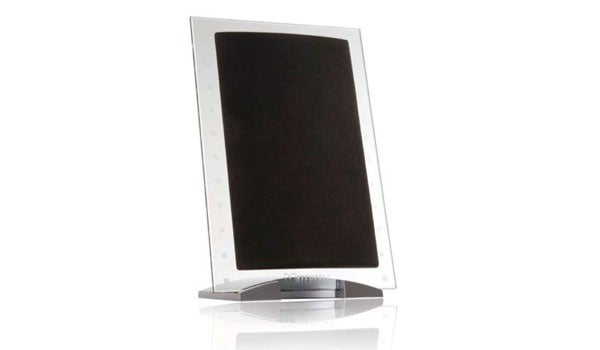 The Hurricane Evo system is actually more at home with music than movies, delivering a velvety sound with enough bass depth to stay well balanced without the subwoofer. Some may find its sound a little too dispassionate to truly tug the heartstrings but you can’t argue with the level of finesse on offer.

The Hurricane Evo system is aimed at home cinema fans with a taste for the unusual. The glass speakers are a refreshing change from the usual bulky boxes, and despite a couple of dated embellishments they should make a classy addition to your room’s décor when mounted on either side of a flatpanel TV – particularly with the magnetic grilles attached.

Build quality is as robust as you’d expect at this price and sound quality is impressive too, if lacking a little passion and power when it comes to movie playback. The HFM 2.1 sub also does a good job with big bass effects, throwing them out with real punch, and the decent array of sockets and controls on the back make it a versatile option if you want to boost the sound from your PC.

It’s worth bearing in mind though, that for roughly the same price as this 2.1 Waterfall setup you can buy one of KEF’s superior-sounding T Series 5.1 flat-speaker systems, or even a pair of Acoustic Energy’s Neo Four floorstanders and a decent sub – you’d need to be a serious glass lover to pick the Waterfall system in the face of such accomplished competition.