Hello, my fellow Wii owners (though everyone else is quite welcome too). Let’s face it: we haven’t had much occasion to get together this year. After a promising start, the supply of decent exclusive titles for Nintendo’s motion-controlled console appears to have dried up. In fact, I can count the number of genuinely great Wii games I’ve seen this year on one hand (and if I were to lose a finger or two in some grizzly DIY accident, I still wouldn’t have any problems in this respect at least). I know we’ve got some good’uns on the way – Animal Crossing, Wii Music, Sports Resort – but how about a few of the quality first-party titles that Nintendo are famous for? Wouldn’t it be nice to get a slice of classic Nintendo action? 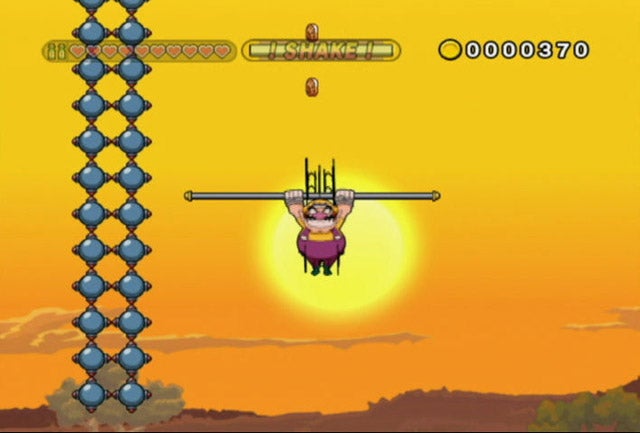 I ask, because this is something that the biggest Wii release in months – Wario Land: The Shake Dimension – doesn’t quite deliver. I know, it looks like a classic 2D platformer and, sure, it features some intriguing Wii remote features, but this is one of those games where there are a lot of good parts but, somehow, they don’t quite click.


Don’t get me wrong: I have nothing against Wario and I like the basic style and many aspects of the game design. Wario, his enemies and the scenery are rendered in brilliant cartoon form, with the lead a cheerfully repulsive, rotund character, bits wobbling as he waddles around like an overall-clad Dick Dastardly gone to seed. 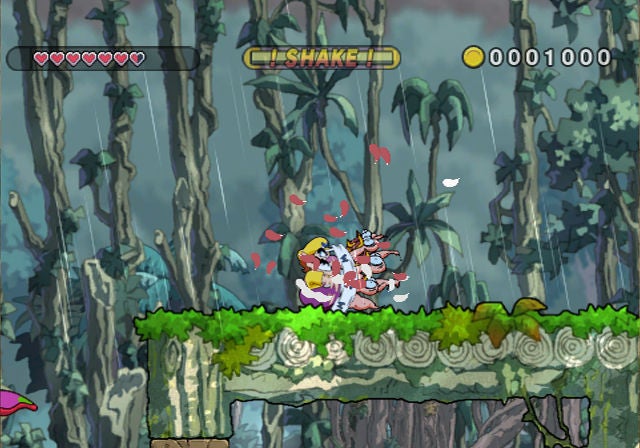 The levels don’t form one single coherent scrolling entity; instead we get a series of connected areas and chambers to plough through, hopping from platform to platform, shoulder-charging through destructible areas and squeezing his flabby bulk through the narrowest gaps. He can hop on some enemies to stun them, pick up others and throw them, while drop-kicking many to their doom. So far, so generic. 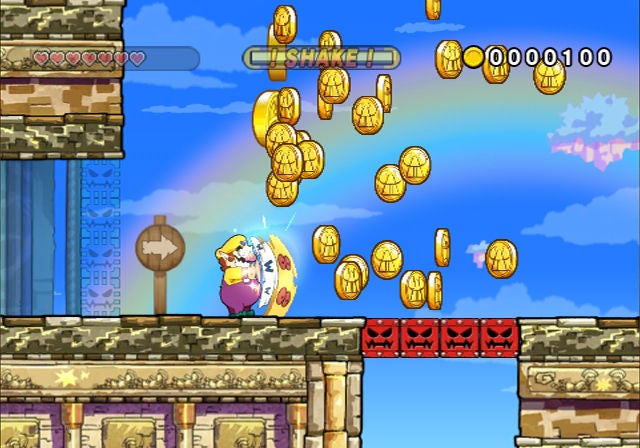 Where things get interesting is in the use of the Wii remote. You actually hold it like an old-school NES controller, using the D-Pad to move Wario and the 1 and 2 buttons to make him jump and charge. However, Wario has a number of special abilities and the way you harness them is by shaking the controller vigorously with one hand. Grab a bag of coins, for instance, and you can shake it until every one flies out. Grab specific monsters and they can actually be shaken into bits. Shake while Wario is standing still and he hammers the floor causing a shock wave that might make nearby enemies fall on their backs or objects topple from their platforms.


There are even sections where Wario dangles from a bar and you shake the controller to make him twirl at high speed around it, giving him the velocity he needs to hit the next high bar or burst through a set of blocks. In short, there’s a whole lot of shaking going on.

There’s also a fair bit of tilting. At times, Wario needs to hurl enemies or objects at targets or switches, and you do so by holding the throw button, tilting the remote until the crosshair is aiming in the right direction, then releasing it. There are also some nice levels that feature little carts that move according to the pitch of the remote. All this stuff works really, really well, and it’s good to see that Nintendo has managed to marry the innovative controls with some cool game mechanics and puzzles. 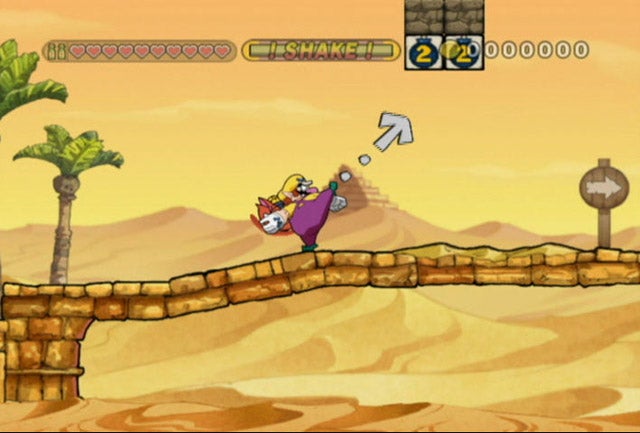 It seems that every level introduces something new, whether man-eating plant platforms that need a careful step, bomb-dispensing slot machines or little boxes that charge up Wario’s shoulder barge to send him flying through packs of enemies and special solid blocks. Wario Land: The Shake Dimension might fall short in some areas, but it doesn’t fall short on ideas.


Why, then, does it fall a little flat? Partly it’s a question of size and structure. The basic idea of each level is to rescue some kind of imprisoned sprite (frankly, the details of the bizarre plot are either beneath me or beyond me, or possibly both). This means racing through the level one way to find the cage in which the sprite is imprisoned, then back the same way (or often following another route) to get it back to safety. 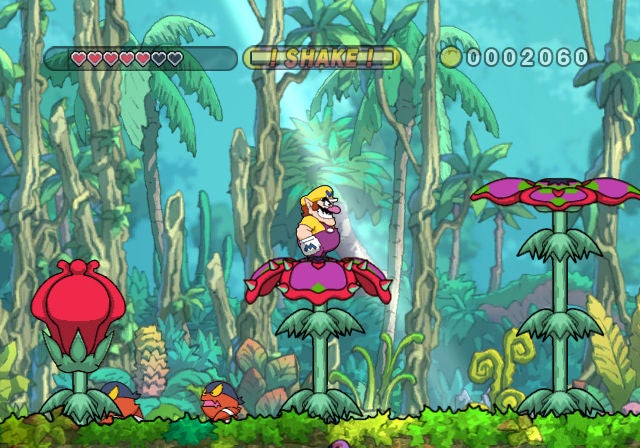 There’s nothing wrong with that, but to hide the fact that this is a fairly small adventure, with only five worlds of five stages each to work through (plus some hidden extra levels in each), the game practically forces you to replay stages in order to earn extra coins so that you can visit your local pirate shop, buy the next map and so unlock the next world.


Wario Land: The Shake Dimension sweetens the deal by also throwing in optional missions (collect 5000 coins, don’t lose a life, destroy three enemies in a certain manner) to challenge the keen player. That’s good for obsessive players, but it all turns into a bit of a dull exercise after a while. 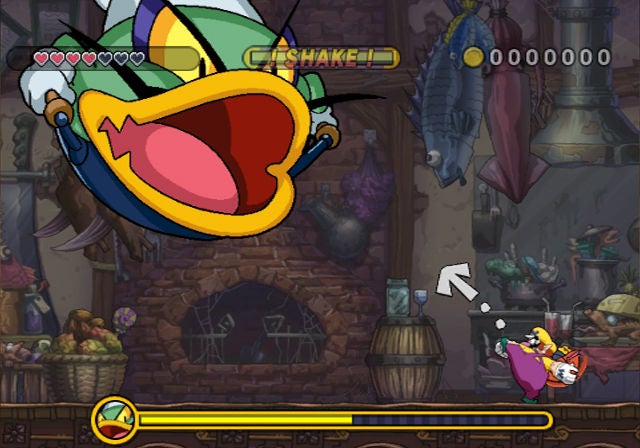 More seriously, the difficulty curve is less a gentle slope and more a square-wave. Wario Land: The Shake Dimension is either so easy and lazily paced that you can practically snooze through it, or so fiendishly difficult that you’ll be tearing your hair out. In the last two worlds, you find a handful of levels that just about hit the sweet spot in between, but most of the time you’re either talking cakewalk or worst nightmare.


The later boss battles are probably the worst offenders on the latter count, combining some practically unavoidable attack patterns and painfully short pauses while the boss is vulnerable. The easy levels won’t suit long-term platform game fiends, but they’re the only ones who will cope with the boss battles. It really doesn’t make a lot of sense.

It also must be said that there are occasions when all the shaking, fun as it is, gets on your nerves. For the most part the remote is pretty responsive, but when the game does provide you with a series of challenging shake-based manoeuvres to pull off you can guarantee that you’ll spend some time pulling hair and grinding your teeth (and it’s probably best if they’re your own). And one final moan: why the big bars on either side of the screen? Couldn’t the game have used the full width? We’ve all got widescreen sets these days, you know. 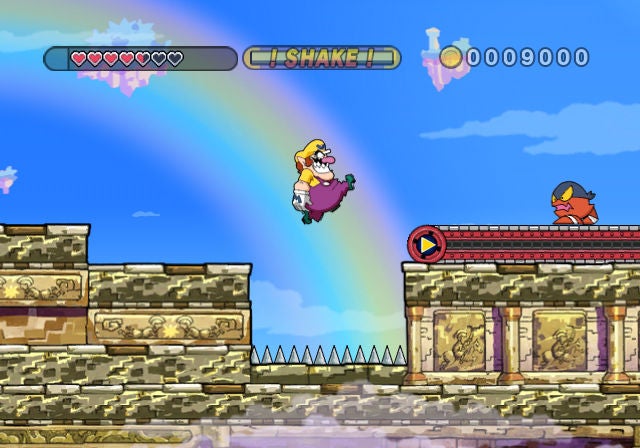 All in all the result is a game that starts off full of promise but gets progressively less interesting as time goes on. We didn’t expect a title of the stellar quality of Super Mario Galaxy, but compare Wario Land: The Shake Dimension to New Super Mario Bros on the DS and it feels pitifully lacklustre by comparison. It’s not a bad game, and the most hardcore Nintendo fans would rather play this than nothing, but wouldn’t it be great if they had another, better option?


Despite a clutch of great ideas, this is a disappointing outing for Wario on the Wii. After a few hours you’ll be shaken, but you definitely won’t be stirred.