We didn’t cover Vermintide 2’s release when it dropped on PC back in March, but with the Xbox One release we’re here to right that wrong before the End Times consume us all.
Warhammer: Vermintide 2 follows on directly from its predecessors, chronicling the adventures of a ragtag group of reluctant allies as they battle against the impending apocalypse. After receiving a thorough spanking in the first game, the invading Skaven have hatched a devilish plan for revenge, aligning themselves with the forces of Chaos and relaunching their attack on the Reikland.

The original Vermintide could be generously described as ‘inspired’ by Left 4 Dead, and while it brought some new ideas to the table, it often struggled to get out of the shadow of its forebear. For the sequel, the developer Fatshark has made a valiant effort to avoid just ripping off Left 4 Dead, although it’s borrowed a few ideas from Destiny along the way.

It can be forgiven this transgression, though, because the two formulas gel together magnificently to create a more engaging and long-lasting experience than the original Vermintide could offer.

On the surface, Vermintide 2 sticks to the Left 4 Dead formula quite rigidly. A team of four survivors must make their way through a series of levels, fighting off hordes of ratmen while watching out for special enemies, each of which has a unique attacking style designed to divide and conquer the team.

Many of the special enemies are straight copies of their Left 4 Dead counterparts, with a new name and skin. Gutter Runners are Hunters, Rat Ogres are Tanks, and so on. There are plenty of original enemies, however, with the fantastically named Ratling Gunner making his return alongside a host of new additions for this sequel. 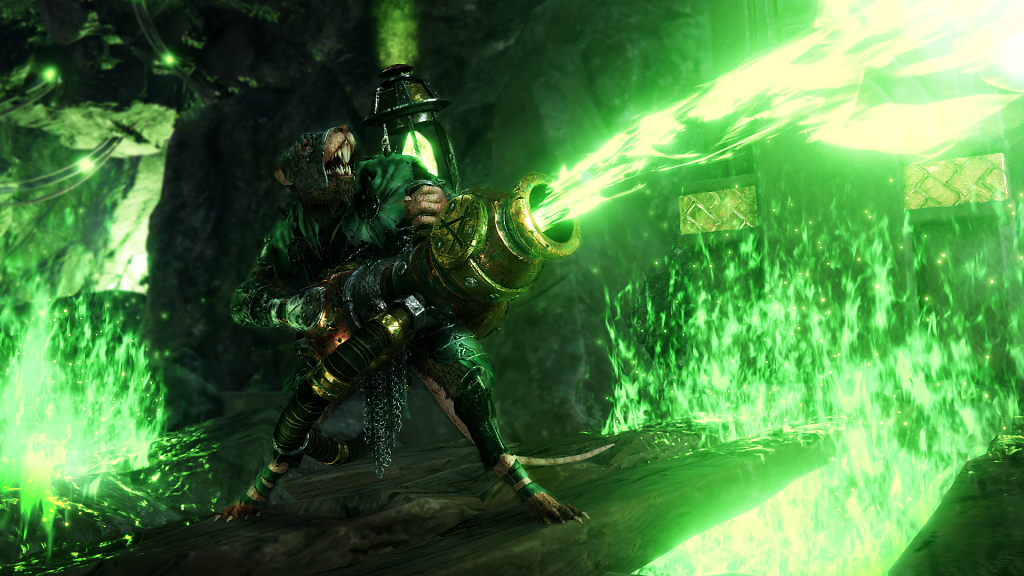 As mentioned earlier, the forces of Chaos have joined the fray, bringing a host of new enemies for players to contend with. Chaos Warriors are huge armoured brutes, who hit like a truck and can take as good as they give. The bloated Blightstormers can summon enormous tornadoes that chase you around the map until you eliminate them.

New bosses supplement the Rat Ogre, each bringing unique attack patterns to learn and weaknesses to exploit. The Chaos Spawn can pick up players and chow down on their faces, recovering a portion of its lost health, while the Bile Troll sprays deadly acid at the party.

There are 15 different levels on offer in Vermintide 2 at launch, spread out across four acts. The levels are varied in both layout and theme, with the campaign taking players across a sightseeing tour of the Reikland. You’ll journey through ruined cities and beautiful redwood forests before descending into the filth-ridden lands of Chaos for the finale.

Each level tends to have a gameplay hook to distinguish it from the others, such as a level in a mine where players must keep up with a minecart that serves as the only source of light. The battlegrounds are beautifully realised, too, especially on a high-end PC or Xbox One X. The only weak level of the bunch is the obligatory sewer level, which I’m assuming is government mandated in a game about a giant rat invasion, so I won’t hold it over the developer’s heads.

Where Vermintide 2 truly differentiates itself from its zombie-filled predecessor is in the details. The original cast return for the sequel, each bringing their own armaments and playstyles. But whereas in Vermintide the differences stopped there, now each character has three sub-classes to chose from, each with their own abilities and a tree of talents to unlock. These character abilities include active powers such as Sienna’s teleport or Kruber’s charge – moves designed to change the flow of battle or save you from a hairy situation.

Each subclass also has its own passive and active abilities, which benefit their suited playstyle. Victor’s Bounty Hunter subclass is all about shooting the guns, so he comes with a passive boost to ammo capacity and reload speed, while his unlockable traits can further buff his lead-slinging abilities. These buffs aren’t world altering, but you can throw together some potent character builds if you put your time into synergising your weapons and traits.

Due in part to the Warhammer Fantasy setting, combat has a strong melee focus, with limited ammunition on offer for bows and firearms. Each character has a range of weapon types available to them, ranging from sword and shield combos to greatswords, polearms, flails, and more. Different weapons have different strengths, attack speeds, angles of attack, and blocking capability, so finding the one that suits your playstyle is a must.

With these simple mechanics behind it, combat is an intense but rewarding struggle. Vermintide 2 constantly throws hordes of enemies in various combinations at the team, forcing you to react accordingly. Hiding the rest of the team behind a stout dwarf with a shield, forming a blender of flailing weapon swings behind him is brutally effective at dealing with the hordes. However, a lone gas grenade lobbed in by a Globadier can quickly ruin that plan. Good teams will react quickly, while others will crumble in an instant.

Teamwork really does make the dream work here. Vermintide 2 can be played alone or with random players online, but you’re selling yourself short on the experience if you don’t have a team of players. Communication is key, especially on the higher difficulty modes, where calling out and eliminating specials is vital to your survival – as is being able to scream for help when a Packrat kidnaps you. 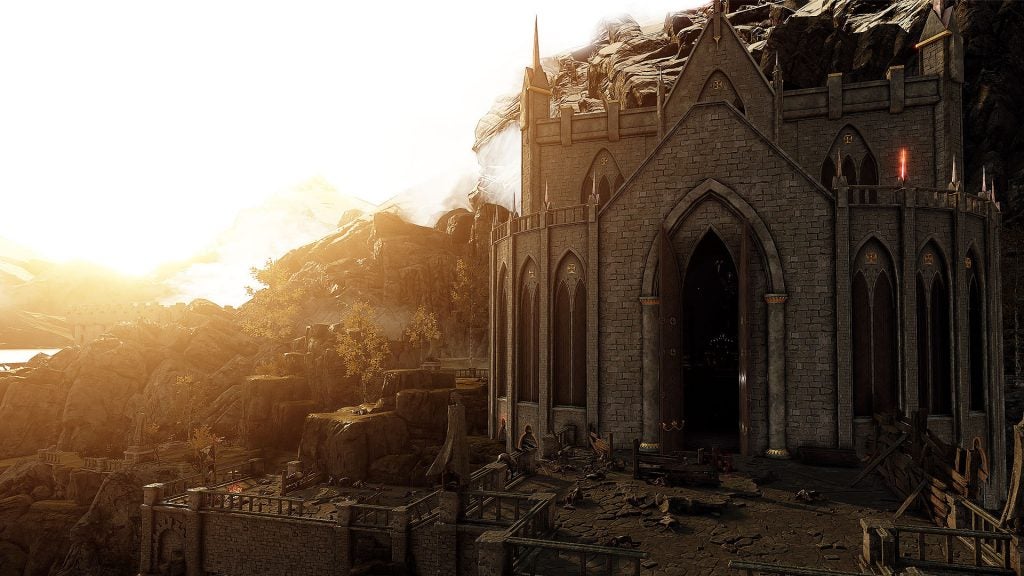 Speaking of difficulty modes, Vermintide 2 has four on offer, ranging from recruit all the way up to legend. Each difficulty has a minimum power rating that your party members much reach before they can enter, which is entirely sensible given the brutality of the harder difficulties.

Recruit offers a leisurely experience, introducing you to the gameplay mechanics and the different special enemy types without punishing you harshly for mistakes. Later difficulties effectively crank up the pressure by increasing damage taken, the frequency of horde attacks, ramping up the spawn rate for the specials, and even introducing friendly fire into the equation.

One of the standout additions to this entry is the new power level system, not too dissimilar to Destiny’s light system. Each character has five gear slots, two for their weapons and three for adornments, all of which add to your overall power level. Rather than directly pilfering Destiny’s system, however, Vermintide 2 makes the bold decision to have the effect of your power level be nigh-on indecipherable at first glance.

Your power level has no bearing on the amount of damage you take, so being punted across the map by an irate Rat Ogre hurts as much as it always does. Where power level does come into play is in how hard you hit back.

Weapon damage, push strength, and your ability to cleave through multiple foes is all determined by how high your power level is in relation to your chosen game difficulty. The power of your weapon itself is also inconsequential, as your damage is calculated from your hero’s overall power.

The power level system is a fantastic addition, giving players a constant goal to work towards as you grind out better gear to take on the higher difficulties. However, Vermintide 2’s refusal to explain the system to the player is baffling. Everything could have been easily explained in a quick tutorial, or even through loading screen hints. Instead, Vermintide 2 seems to harbour a resentment towards anyone wanting to know how its systems work. 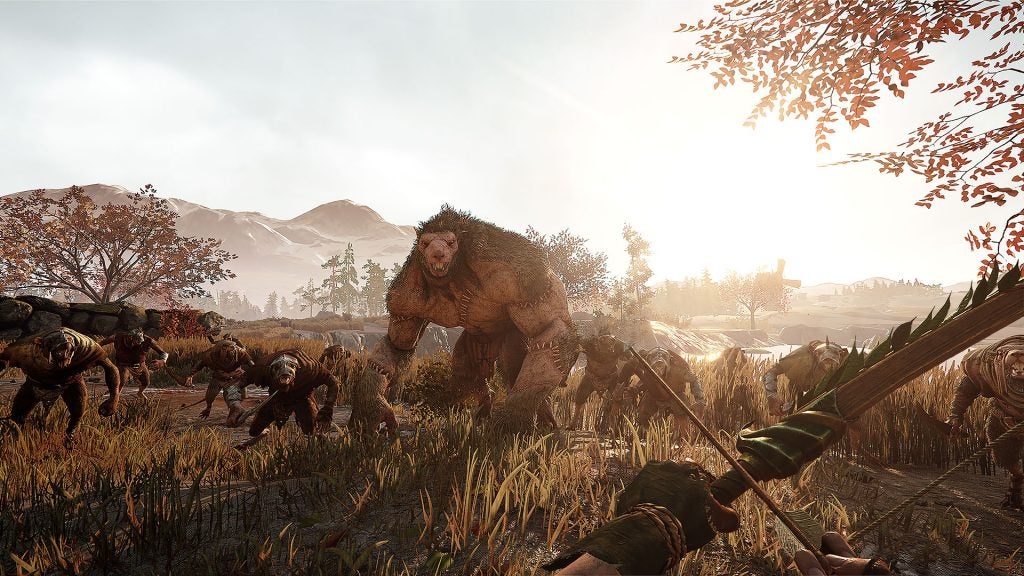 There are a few minor niggles and quality of life issues that hamper the experience, but none of them are deal breakers. For example, gear can’t be upgraded while equipped, but trinkets, charms, and necklaces can all be worn by multiple characters. This means you must un-equip gear from every character before you can upgrade it.

Vermintide 2 forges its own path in the four-player co-operative shooter genre, branching off from similar titles such as Left 4 Dead through a focus on unique character playstyles. The introduction of a robust progression system allows players the opportunity to play in whichever style suits them.

At the same time, co-operative play remains integral to the experience, thanks to the innumerable hordes of Skaven and their extremely potent special enemies. This focus on co-op does leave the experience feeling frustrating if you’re forced to go it alone, or if your teammates aren’t pulling their weight. However, if you can get a decent squad together then you might just be able to stave off the end times a little longer.