Available on PC, coming soon to Xbox One and PS4
Eternal Crusade, it must be said, is not what all of its buyers either wanted or expected. When announced there was much talk of a massive multiplayer online shooter; a game with real character development that might see you taking part in huge battles involving hundreds of players, like a Dark Sci-Fantasy Planetside with Space Marines and Orks. What we’ve got at launch is something smaller in scale, more akin to a third-person Battlefield with less sniping and more shock troops and melee combat. This is the first reason why some are disappointed.

The second? For a game that’s just out of early access and fully launched, Eternal Crusade feels worryingly unpolished. The core menus and features can be complex and unintuitive, yet there’s no real attempt to explain how they work or what you’re meant to do. The in-game tutorials are basic and shoddy, covering the basic controls but leaving you to work out the rest yourself. In-game, matches are prone to texture pop-up, odd disconnections and occasional but horrifying lag. Coming from the likes of Destiny, Star Wars: Battlefront and Overwatch, Eternal Crusade feels less like a launched product and more like an early Beta. 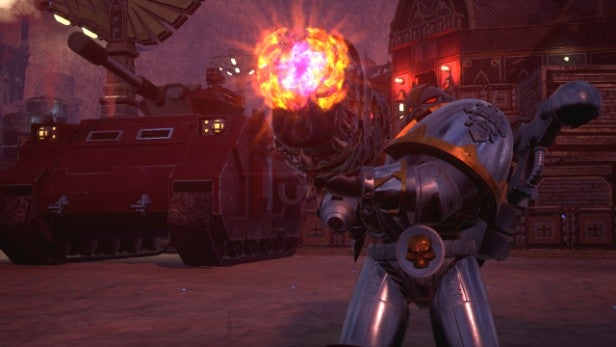 This is a shame. Eternal Crusade can be rough – and not just around the edges – but there are some good ideas here and some signs that the team at Behaviour actually know and love the Warhammer 40K universe. Some of the players clearly feel the same way. Yet in several long hours of playing this team-based shooter I’ve only had a few minutes where I could say I’ve been enjoying myself.

Mechanically, it’s a bit of an odd hybrid. In its persistent characters and its choice of four factions – Imperial Space Marine, Chaos Marine, Ork and Eldar – Eternal Crusade does show traces of an MMO. It even has systems of experience points, levels and upgrades, boosting capabilities and cool-down times or enabling you to access weapons easier, while saving the in-game currency will get you in reach of stronger melee weapons and guns. 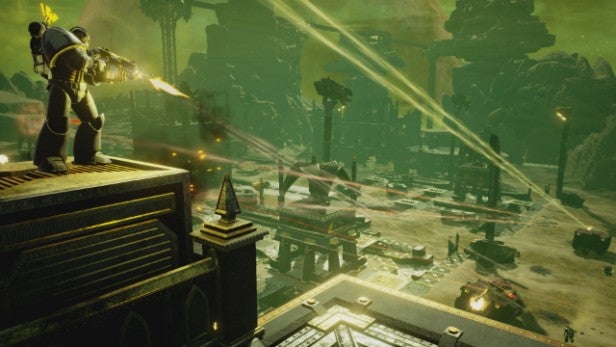 But while there’s a confusing overworld map and a lot of talk of thousands of simultaneous players all scrapping over territory, the actual fighting comes down to much smaller-scale battles, which might take in anywhere between eight and thirty-two players per side. You fight, using a preset or custom loadout, from a third-person view, a la Gears of War, with broadly similar cover mechanics and movement. You can duck behind cover and blast away, mantle over low walls and clamber up, say, stacks of ammo crates. Troops with heavy weapons can also lodge them securely on low cover; an act that takes a couple of seconds but gives you huge bonuses for accuracy.

Where Eternal Crusade rings the changes, though, is in its focus on melee weapons. Two or three of the preset loadouts for each faction have low-power ranged weapons but high-powered melee weapons – a reflection of the classic pistol/chainsword combo beloved of Imperium forces in the tabletop games. At least one loadout pairs this with a jetpack, giving you a nice, fast ‘death from above’ attack that’s perfect for smashing into enemy defenders. Fast and lethal, melee weapons transform the whole nature of the game. 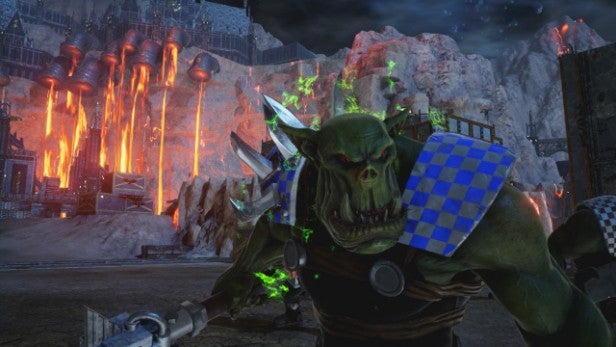 In fact, they might transform it a little too much. This is a game where the basic ranged weapons (usually bolters or bolt-pistols) are inaccurate at range and struggle to make much impact on power armour. Heavy bolters are much more dangerous but slow to spin up and prone to spit bolts everywhere. What’s more, characters don’t turn all that fast (If you’re a gamepad player, switch to mouse and keyboard). As a result, troops with melee weapons are often demolish troops without unless they’re a) packing serious upgrades or b) in numbers. Even the last approach isn’t easy, because with friendly fire very much a feature attempts to blast at, say, a Space Marine shock troop invading your Ork stronghold tends to result in a lot of your fellow Orks being downed.

It’s not terrible, and Behaviour could fix it, but there seem to be a lot of balance issues that need ironing out in Eternal Crusade. Maps seem biased in favour of one side or the other, and while there’s a kind of Condorcet cycle going on between shock troops, ordinary grunts and heavy weapons dudes, it’s not quite working in practice. Vehicles, meanwhile, can be requisitioned and driven around, but very few of the maps seem to give you any reason to do so beyond cutting down the distance to combat or giving you a safer, nearer point to respawn. Think of the obsessive design, balancing and re-balancing and attention to detail that goes into, say, Blizzard’s games. Eternal Crusade could really do that kind of TLC. 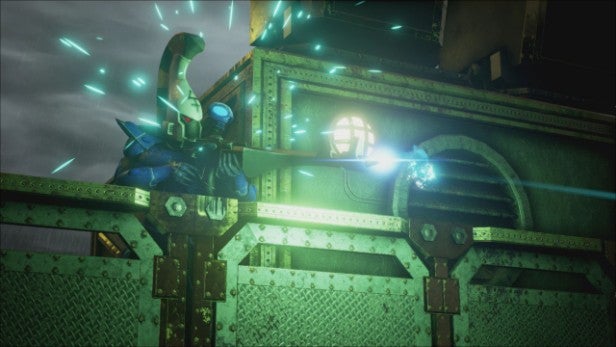 The same thing applies to the visuals. Sometimes it looks good, in the way that some late Xbox 360 or PS3 games looked good, but does it compare to Gears of War: Ultimate Edition, Uncharted 4 or even Plants vs. Zombies: Garden Warfare? Nope. While the character models and the architecture show a deep knowledge and love of the design of Games Workshop’s grimdark sci-fi universe, they don’t show a whole lot of finesse. In fact, the five-year-old Warhammer 40,000: Space Marine arguably did a better job. With a few exceptions the map design seems worryingly generic and the customisation features aren’t so great, either. If I’m playing a Chaos Marine I want to have all kinds of horns and tentacles to graft on there. I don’t want a Space Marine with a few spikey knobs on.

There are some concerns about the presence of the dreaded microtransactions, with weapon upgrades available both through in-game currency and for real cash. In practice, though, it doesn’t seem a huge issue. While the top loot doesn’t come cheap, you can get hold if it if you’re competent and put the hours in. 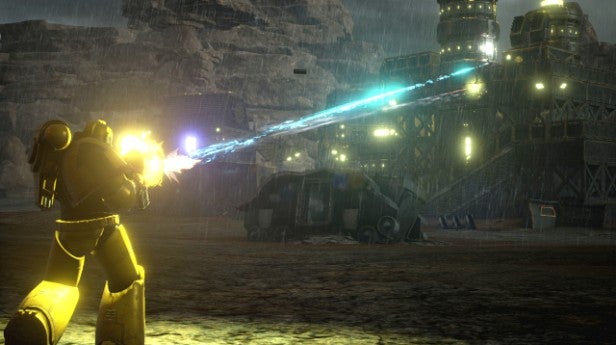 Eternal Crusade isn’t an unmitigated disaster. Keep playing and you’ll find that – every now and then – the whole experience comes alive. There’s one large-scale map where the Space Marines had to guard a series of objectives against an Eldar assault. Here there was real drama, palpable tension and some serious thrills as we manned the walls, blasting away to keep the fiendish Eldar warriors out. This is what I want from a 40K game. Ditto another large-scale game where dozens of Ork Shootaz and Loota Boyz held off wave after wave of Marines. There’s clearly potential here for something good. Yet most of the time I’ve found it dull, monotonous, frustrating, unforgiving, incomprehensible and just annoying; the kind of game where I have to push myself to play it for another hour, when I should be struggling to resist just one more match.

Hopefully, Behaviour can turn this around. Goodness knows, some people seem to love their game, and it is much more to it than a third-person Battlefield inside a 40K skin, even if it can feel that way at times. Right now, though, it’s a struggle to recommend it when you could be playing Star Wars: Battlefront, Overwatch, Blacks Ops III and Destiny right now with Battlefield 1, Titanfall 2 and Gears of War 4 just around the corner.

Verdict
Eternal Crusade is trying to do a lot and be a lot of things to Warhammer 40,000 fans. There’s an obvious love of the universe and some real thinking behind the more melee-focused combat style of the game but, right now, it isn’t really working. The gameplay needs more polish, better balancing and more finesse and the same goes for the presentation. If or when it gets that it could be a contender, particularly if you love the franchise, but until that happens you might want to stick to something else.