Personally speaking, there are two main reasons to like Warhammer 40,000: Deathwatch – Tyranid Invasion. Principally, my affection for the game comes from its title. For an eager journalist looking to fill his or her word count quota, the sheer length of the name – and let me say it again, Warhammer 40,000: Deathwatch – Tyranid Invasion – is a dream come true. Without all those words, this somewhat protracted and overly honest opening would have taken a lot longer to write, and been a lot more painful to read.

The other main selling point for Warhammer 40,000: Deathwatch – Tyranid Invasion is that, for fans of Games Workshop’s Warhammer 40,000 franchise, this is something of a Ronseal release: it does exactly what it says on the tin. Here’s a game from Rodeo Games that takes an established and much-liked model and transfers it to an IP with a fairly hefty fanbase. It’s a win-win, right? Well, on the whole, yes.

The structure of Tyranid Invasion doesn’t take all too long to grasp, even if the finer details of the game’s plot will leave newcomers scratching their heads. Controlling a batch of space marines boasting the kind of builds rarely seen since the East German swim team took to the pool in Seoul 1988, play in Rodeo’s latest takes the form of a top-down, turn-based shooter with some light RPG elements for longevity’s sake. If that sounds in any way complex on paper, in practice play is actually surprisingly simple. 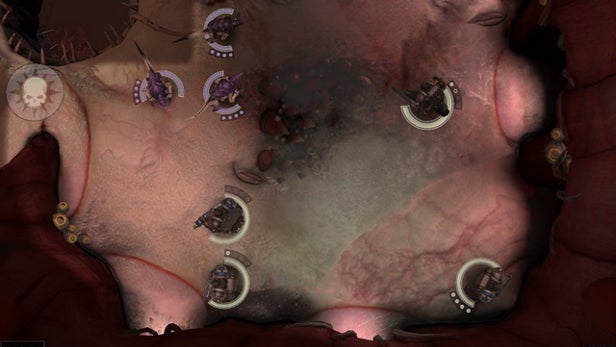 The turn-based element means your main input is tapping on the grid-like stages where you’d like your marines to go, one by one. Each movement uses up the action points available to you that move, as does taking on your combatants – an array of alien-like creatures who, in greater numbers than your own, patrol the stages in order to take you out. Firing upon them is split into two modes; you can either simply shoot them down when in range as part of your turn, or you can put each marine on ‘overwatch’, which means they’ll spray out bullets during your opponents turn should they enter your field of vision.

In terms of structure, that’s Warhammer 40,000: Deathwatch – Tyranid Invasion in a nutshell. What developer Rodeo Games does to flesh the game out is provide a wide range of settings and difficulty levels to ensure that each battle isn’t quite like the last. Your goals shift slightly from one level to the next, and play becomes ever more tactical as each level rolls by. With targets spread evenly across the landscapes, should you opt for a Blitzkrieg like attack and pack your marines together, or should you spread out so your men can’t be surrounded and picked off one by one? 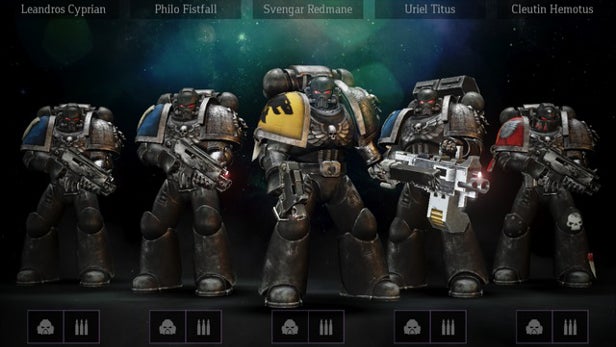 Each stage is also shrouded in mystery as you enter it, with enemies appearing and disappearing out of view depending on how much of the board you’ve investigated. It’s possible to think you’ve wiped out all of your foe before discovering that, in reality, there are many more beasties out there baying for your blood once the shadows on certain grid squares have been lifted.

Added to this is the XP awarded after each successful encounter, which enables a sense of progression to proceedings and allows your marines to level up just as the competition starts to do the same. It’s a logical, safe set up, and the longer you play, the more finely balanced  Warhammer 40,000: Deathwatch – Tyranid Invasion seems to become, leading to levels where one wrong move can cost you dearly. If you’re new to Warhammer 40,000 or Rodeo Games’ output, then there’s very little to fault here. 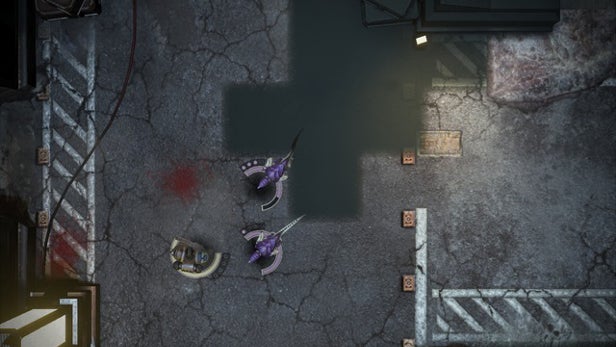 What can’t be ignored, however, is the overt similarity all of this has to Rodeo Games’ own successful franchise, Hunters. Indeed, the turn-based action point system has been lifted almost entirely from the now four year old series. Strip back the Warhammer 40,000 wallpaper and this could be Hunters 3 – hardly a criticism in itself when you consider the critical acclaim Rodeo’s IP has won in recent years, but nevertheless a noteworthy point for anyone coming to Warhammer 40,000: Deathwatch – Tyranid Invasion expecting something fresh and original.

Regardless, similarities to the studio’s other releases thankfully don’t overshadow the fact that this is a quality release that finely merges the benefits of a well structured turn-based shooter with an accessible RPG that Warhammer 40,000 fans will likely take to with gusto.

Verdict
As solid and accessible as Rodeo Games’ latest top-down, turn-based shooter is, there’s no escaping the fact that it’s incredibly similar to the studio’s now four year old Hunter series. Nevertheless, for fans of Warhammer 40,000, the developer has served up a solid and finely-balanced slice of strategy that does justice to the license and more besides.