The Walking Dead: Saints and Sinners is an enjoyably immersive foray into the iconic undead universe, only occasionally held back by a handful of rough edges.

It’s always hard to express a form of meaningful weight in virtual reality. In the end, you’re doing nothing but swinging a pair of controllers through the air. The Walking Dead: Saints and Sinners aims to change this perception, and is partly triumphant.

Its weighty combat system, freeform exploration and surprising dedication to narrative consequences helps set Skybound Games’ latest effort apart from the pack, even if at times it’s held back by archaic mechanical design and over-reliance on resource management. What you’re left with is an enjoyable spin on the zombie genre that puts virtual reality to phenomenal use at times. 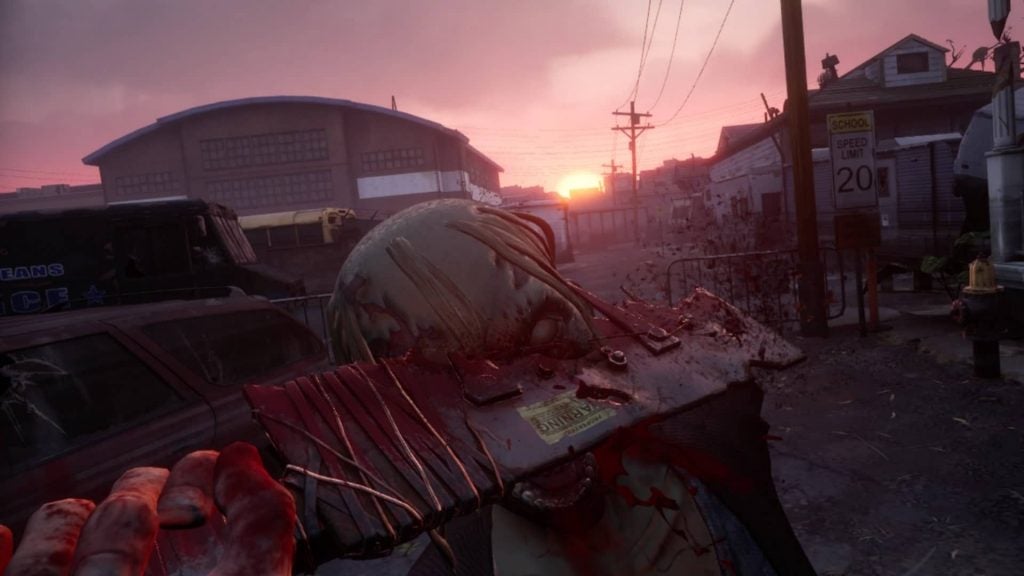 Saints and Sinners transports you to New Orleans, which has been completely transformed by a mixture of flesh-eating zombies and natural disasters. Flooding has altered the city into a series of individual islands, encouraging the rise of hostile factions existing in isolationist states interested in only one thing – staying alive. The Big Easy this certainly isn’t, and you’ll need to learn how to navigate it by land, water and whatever other means necessary.

The campaign begins with a tutorial guiding you through the acts of stabbing, hacking and shooting, all of which are accomplished with a multitude of grizzly tools. There’s a sense of brutality to the combat in Saints and Sinners that honestly feels morally reprehensible. You need to use one controller to physically hold a walker back, moving them into place before launching your weapon into their skull. Whether you’ve got a knife, axe or broken bottle, each attack connects with astonishing impact.

You really need to put a substantial amount of weight into each strike, otherwise you’ll merely pierce the skin, failing to penetrate beyond that. It means that when you’re surrounded by walkers you can’t cower, instead needing to push forward with the utmost aggression. Obviously, this means you’re likely to become unaware of your surroundings and wail on a nearby table. Yes, my hand is still sore.

Once out of the tutorial, you’re slowly ushered into the sunken metropolis of New Orleans, although it’s segregated in a way that each new area feels distinct. Early missions have you exploring streets littered with rusted husks of cars and sneaking into a creaky mansion to uncover radio components. It’s a surprisingly wide space with an apt aura of lifelessness, feral shrieks from nearby walkers instilling a constant feeling of paranoia that I adored. 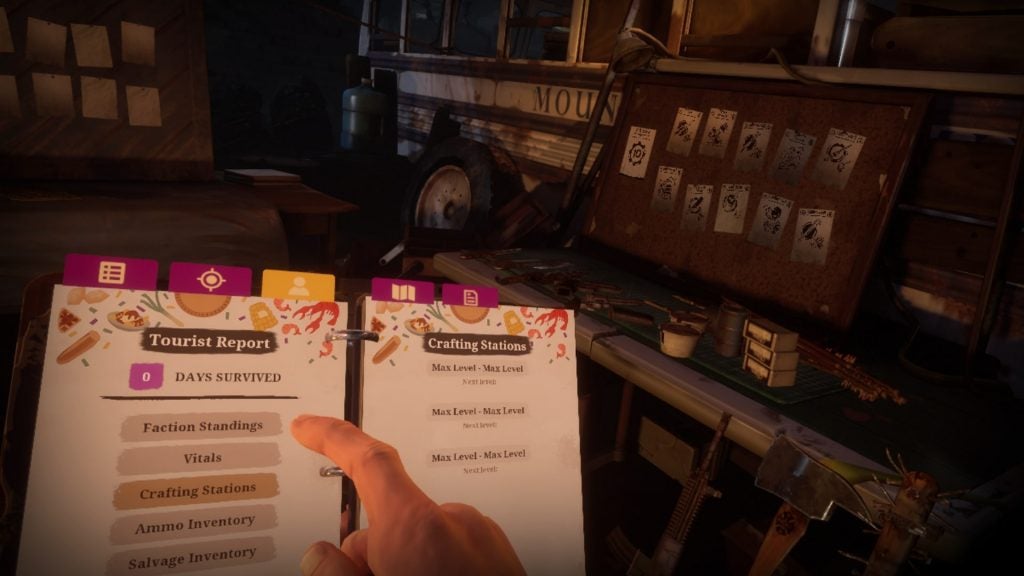 A journal can be found on your chest – ideal for checking recipes, relationships and other important things

Your base of operations is an abandoned school bus in the middle of a zombie-infested graveyard. A home away from home if I ever saw one. Here, you can access a variety of crafting recipes for weapons and meals. Go too long without a protein bar or can of pop and you’ll soon lag behind, increasing your odds of being torn apart.

Otherwise, it’s a humble abode away from the chaos where many story beats are introduced, although it can be a drag standing on the spot listening to long dialogue sequences over the radio. Locations across the map are reached with a boat situated away from your base. All you do is select an icon before loading into a new area. This does ruin the cohesion of a living, breathing world, but each location is distinct and large enough that it seldom matters.

In the first few hours you’ll be contending primarily with the undead, before humans with their own firearms and sharp-witted survival strategies begin to surface. Belonging to two factions, known as The Tower and The Reclaimed, every living being in Saints and Sinners is driven by morally grey ideologies. As time went on, I established relations with each enclave, making my own decisions which inevitably had consequences on the unfolding story. Particular conclusions are genuinely harrowing, with the medium of virtual reality only intensifying the horrors. 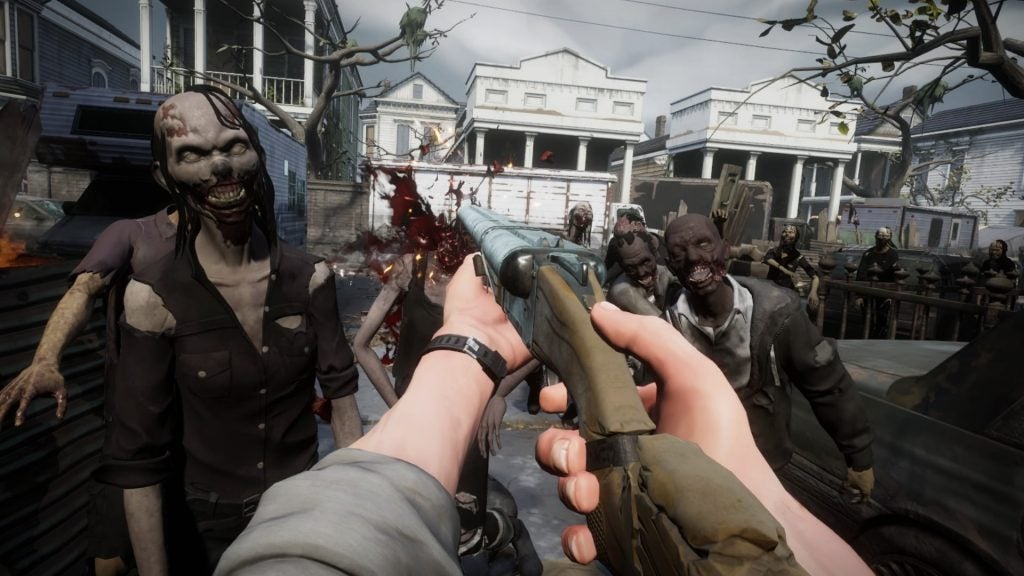 It’s easy to roam the landscape killing everyone in sight with the most diabolical means at your disposal. You could take a quest from a grieving widow or plant a propane canister at her feet before walking away and blowing her to smithereens.

The act of stealthily stabbing zombies in the head can grow tiresome overtime, spiced up by far more chaotic encounters with humans and bells situated throughout New Orleans. The Bells are essentially an alarm system which activate in the early hours of each evening, bringing hordes of undead onto the streets. Beeps from your wristwatch tease the oncoming swarm, putting timely pressure on finishing your mission and rushing home before things hit the fan.

I loved pushing my luck, floating the idea of exploring just one more abandoned houses before calling it a day. This greed came with punishment as I turned a corner on my way back to camp, greeted by an endless line of walkers. There was no escape, and I was forced to climb up a nearby pipe, jump through a window and find shelter until the sun rose once more.

Repetition is remedied by an intuitive control system that only fumbles occasionally. Movement is smooth and satisfying, as is traversal which implements the same feeling of weighty responsiveness as combat. Virtual reality is surprisingly good at making me feel a sense of vertigo as I peer down from a ledge, knowing that letting go of the trigger will result in a catastrophic fall. One of my only qualms is the act of pulling yourself up onto ledges, which just feels clumsy.

Saints and Sinners doesn’t mess around when it comes to making harsh, meaningful decisions.

It isn’t all action and traversal. You’ll often stumble upon other survivors to converse with. Dialogue options are available, but they often veer from neutral to outright diabolical. One early example involved me laughing in a woman’s face after killing her zombie husband, revealing that he murdered their children to spare them a similar fate. She wasn’t happy about that.

This analysis of fractured morality runs through the bloodstream of Saints and Sinners, but it’s never explored to its maximum effect. The hit-and-miss dialogue system doesn’t help, with the slightest movements from my avatar seen as a threat, causing characters to restart entire conversations where decisions had already been made.

The Walking Dead: Saints and Sinners is a fully-fledged VR experience well worth experiencing, especially if you’ve got the technological prowess to make the most of its gritty, realistic world. While its gameplay loop can sometimes grow tiresome, having such a range of systems to experiment with amidst a tense and involving story more than makes up for its shortcomings.

Combat is marvellously brutal, possessing a sense of feedback I’ve not really seen the medium tackle before. It feels real in a way that’s almost uncomfortable when faced with fellow humans to dispatch. Gamers always say they’re waiting for the zombie apocalypse to come, but this is a reality I never, ever want to be facing.