There was something special about Clementine. We didn’t even notice it at the time. Not really. Clem was just one of a cast of characters we encountered when we first stepped into Telltale’s take on Robert Kirkman’s astonishingly brutal world, and just one of many people we were tasked to care for and watch over.

But even though the story was ostensibly that of her father figure Lee – and even though later episodes subtly turned the lens away from Clem – think of Telltale’s The Walking Dead, and immediately you’ll think of those dark curls and that grubby baseball cap.

As it progressed, however, we developed a bit of a love/hate relationship with Telltale’s version of Kirkman’s extraordinary post-apocalyptic universe. There was forever a saccharine quality to those early Telltale adventures, a kind of manufactured intensity that intentionally – maliciously – pulled at the players’ heartstrings, lurching us from one horrible decision to the next, finding endless ways of forcing us into horrific situations where one wrong button could be a death sentence. The Final Season – entitled “Done Running” – intends to rectify this by refocusing the tale back on Clementine, only now she’s grown older, and maybe a little colder, and is now in charge of a young child, AJ, herself. The game will look for a prior save to ascertain if you’ve played Telltale’s series before, but even if you haven’t, don’t sweat it; you’re able to make a few arbitrary choices at the beginning anyway, thanks to a brief recap that’s helpful for newbies and veterans alike.

Like the Telltale games before it, The Final Season will release episodically, offering a couple of hours’ worth of story each time before, presumably, rumbling up to a “complete edition” release further down the line. Some people may not like the episodic nature of Telltale’s storytelling, but we do; regardless of whatever guise it takes, The Walking Dead offers a frantic, hold-your-breath kind of intensity that’s well suited to instalments, not least because it gives us the chance to recover our thoughts – and heart rate – in-between episodes.

If you’ve previously played any Telltale game the control scheme will feel instantly familiar, but even if you haven’t, it’s pretty intuitive, although you’d be advised to keep an eye on the screen at all times, as it’s hard to know when the next QuickTime decision will spring up.

Every single one of those choices count, even the seemingly mundane ones, and – as we’ve come to expect from Telltale – at the end of the episode you’ll see a recap of all your decisions, along with statistical data that shows how your choices mirror – or differ – from your pals and others across the world. 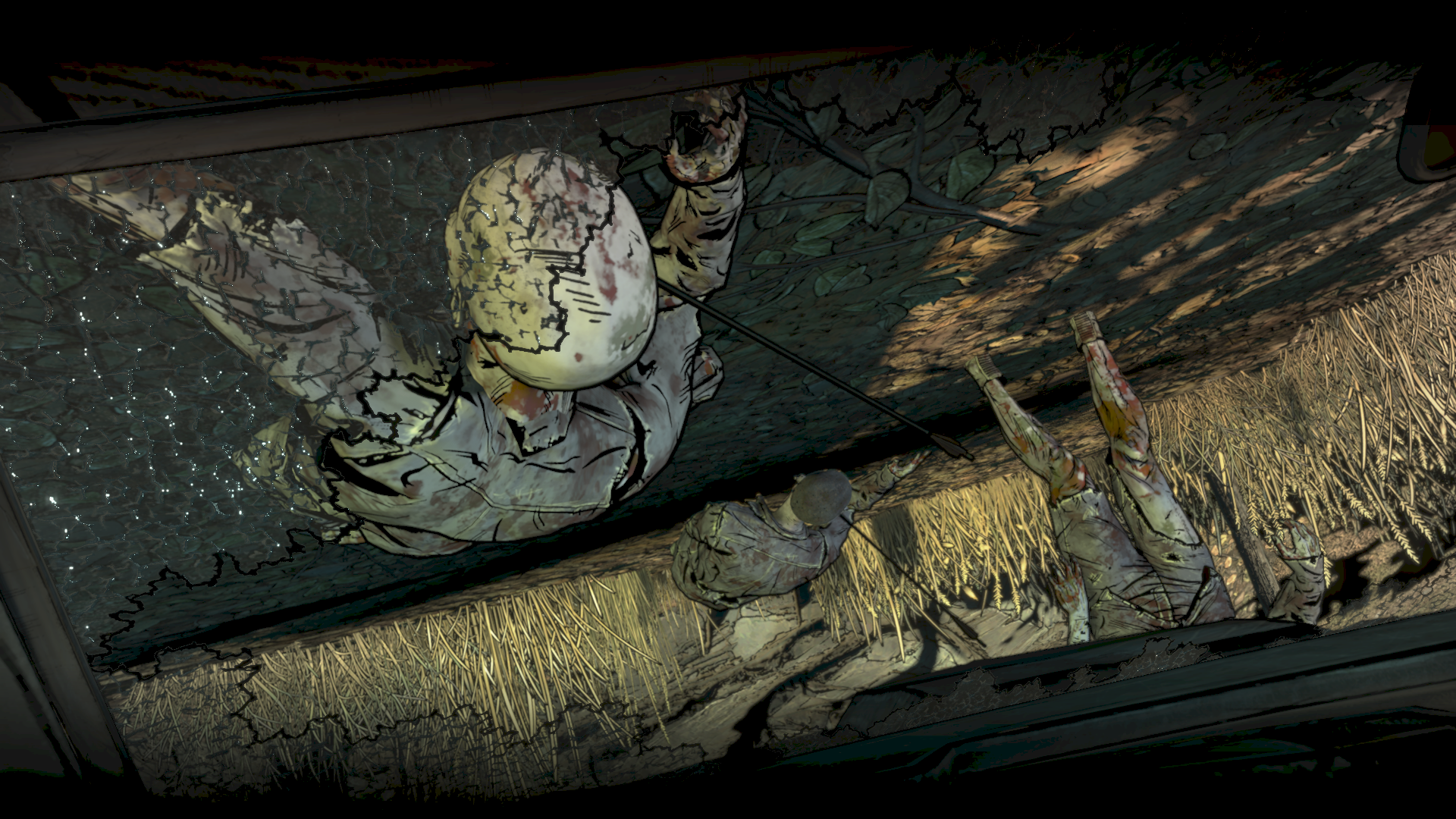 Driven almost entirely by the choices you make – sometimes with just a second or two’s warning – the story moves at your command, and you’ll get to select from either a handful of dialogue options or, in some instances, between two very black and white scenarios. For the most part, the choices feel authentic, but there never fails to be one or two times an episode where the options before Clem don’t automatically line up with what we’d wanted to say or do. Thankfully, that’s pretty rare.

Mechanically, it’s more of the same we’ve had before. You’ll choose where, when, and how to proceed through, say, a horde of Walkers, and the graphic-novelesque visuals have retained its flair for the over-the-top geysers of blood and broken sinew we came to love in earlier episodes.

Whilst not quite a walking simulator in the traditional sense of wholly story-driven tales like Dear Esther or Everybody’s Gone to the Rapture, make no mistake; in The Final Season, the story matters most. But you’ll also get the opportunity to flex your button-mashing and quick-timing skills courtesy of a good selection of combat and exploration opportunities that pop up throughout the episode, too. That said, the former isn’t quite as effective at telegraphing what to do, which means Clem may stumble in the hands of newbies who’ve yet to learn that sometimes, the best course of action is to do nothing at all.

The pacing’s not quite right, though. As you might expect from the inaugural episode, The Final Season’s first instalment needs to spend a little time establishing the backstory, as well as setting up Clem’s new adventure, too. But while you’d expect some downtime following the game’s gripping opening segment, the second act swings back the other way far too much, and sees Clem and AJ aimlessly potter around, trying to connect with a group of kids hunkered down in an old, now-abandoned prep school. 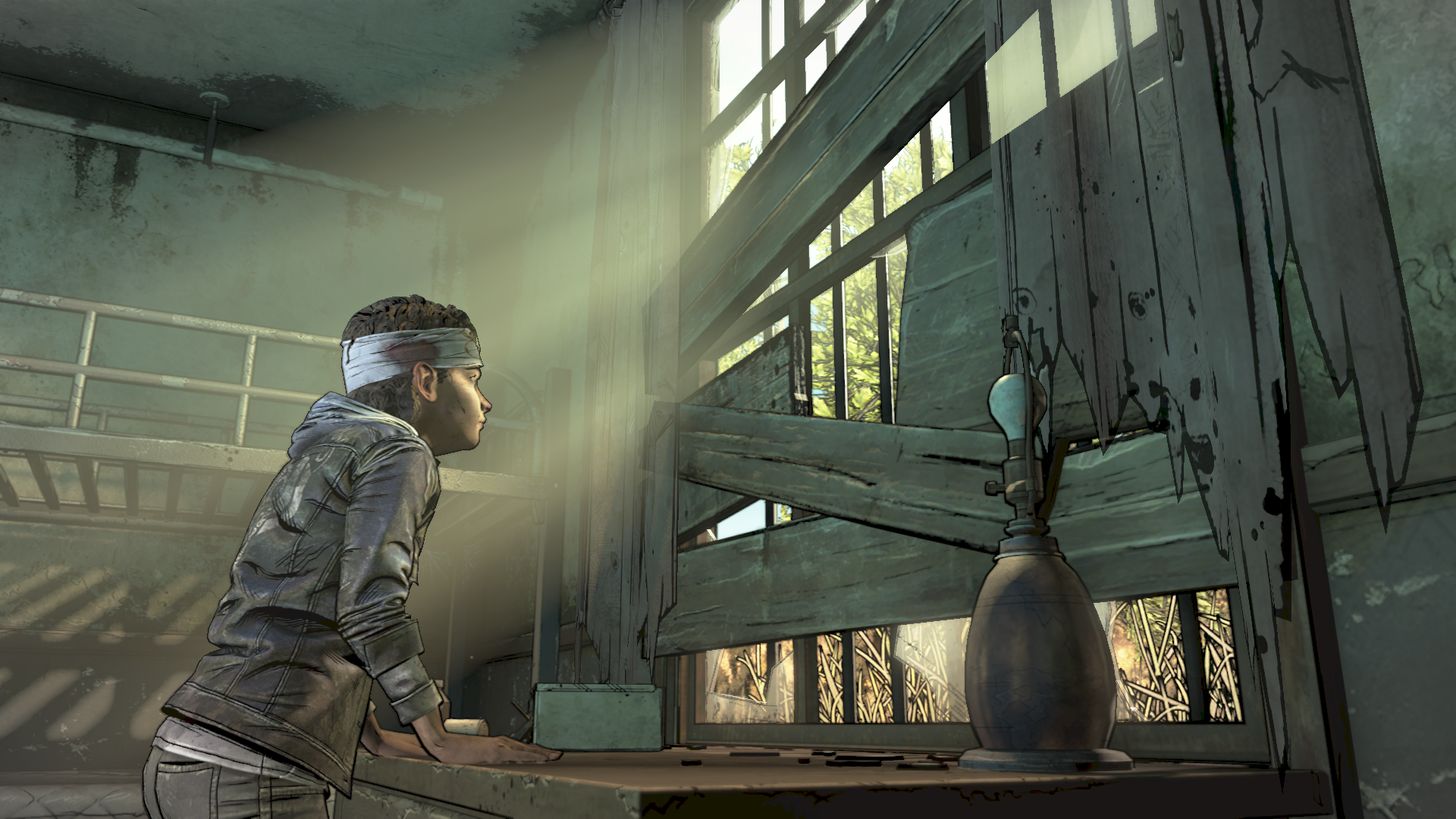 Sadly, you can even predict the supporting cast before you meet them. There’s the usual pack of misfits – the spiky but vulnerable tom girl; the quiet, sombre scribe; the funny, quirky musician; and the strong charismatic leader, of course – which is a bit of a shame, as Telltale’s usually pretty good at moulding believable characters. These, however, lack the nuance to elevate them from caricatures.

The stars, however, remain in Clem and her ward, AJ. And it’s interesting, watching as Clem imparts survival tips to AJ having watched Lee do the same to her. But AJ’s only ever known this post-apocalyptic nightmare of a world, which means he lacks Clem’s innocence, resulting in reactions that are decidedly more unpredictable than Clem’s…

It’s stunning, though, this world, however bruised and broken it’s become. Telltale’s iconic art style has never looked sharper nor stronger, and never before has exploring any of its worlds been more appealing, particularly as there’s now more freedom to explore and hoover up secrets and collectables – even if there are still one or two invisible walls scattered around to break the immersion.

So far, The Final Season is pretty much as we’d expected, although there’s a couple of good twists to keep the story fresh and engaging. Woven throughout the tale is a palpable sense of rebirth, of change and starting over; a new beginning not just for the series, but for Clementine herself.

And we can’t wait to see where Clem’s final journey goes next.