The Wacom MobileStudio Pro’s display is one of its biggest selling points, and is one of the only reasons I’d recommend the 16-inch model over the smaller version. This version has a 15.6-inch, UHD (3,840 x 2,160) IPS display. The smaller 13-inch version has a lower-resolution 13.3-inch WQHD (2,560 x 1,440) panel. For amateur artists the 1440p resolution won’t be an issue, but the 16-incher is the only option for those who need huge resolution.

Wacom quotes the 16-inch screen as covering a whopping 96% of the Adobe RGB colour gamut that’s favoured by most artists. While my tests revealed the figure to be slightly optimistic, the screen is still one of the top performers this year and easily matches, if not beats, the Surface Book and MacBook Pro.

In my tests, the MobileStudio Pro screen covered 94.5% of the regular sRGB gamut, which is pretty par for the course on a tablet or laptop at this price point. What’s more impressive is its 89.3% coverage of the Adobe RGB and 80.8% coverage of the DCI-P3 colour gamuts.

The Adobe RGB colour gamut is favoured by professional photographers and digital painters, and is used as a standard when migrating digital projects into print. DCI-P3 is the standard used by videographers for HDR content. The Adobe figure is particularly impressive. By comparison, the Surface Book covers only 67.6% of the Adobe RGB. and the MacBook Pro is slightly better at 81.9%. This makes the Wacom the best choice for artists and photographers. For videographers, however, the MacBook’s 98.3% DCI-P3 coverage makes it a slightly more compelling choice.

The MobileStudio Pro’s 6,840K colour temperature is suitably close to the 6,500K standard, and means that colours, while slightly cool, are suitably realistic and balanced. 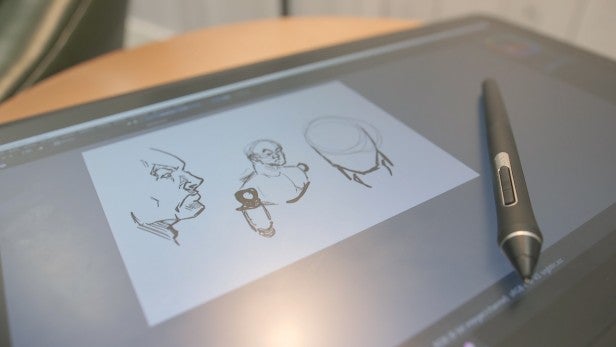 The only area the Wacom falls down slightly is maximum brightness. I detected a modest 0.37-nits black level, but the 287.17-nits white level is middle of the road, resulting in a rather disappointing 777:1 contrast ratio. By comparison, the Surface Book has a 1,750:1 contrast ratio and the MacBook’s sits at 1,457:1.

Wacom is offering the MobileStudio Pro in six different configurations, each of which will offer radically different performance.

Running TrustedReviews’ suite of synthetic benchmarks, the tablet performed reasonably well without any impressive surprises. In Geekbench 3, the tablet ran in with 3,656 single and 7,708 multi-core scores. These are slightly above the Core i5 MacBook and Surface Book. The MacBook Pro achieved 3,300 and 6,947 single/multi core scores in Geekbench 3, while the Surface enjoyed slightly better 3,522 single-core and 7,362 multi-core scores when docked. The Wacom’s 3070 PCMark 8 Creative score is also solid and puts the MobileStudio Pro on a par with most equivalently specced laptops.

The Wacom falls down when it comes to SSD read/write speeds, however. In the AS SSD benchmark, the SATA SSD in the MobileStudio Pro managed 509.1MB/sec and 461.3MB/sec read and write speeds. This puts it well behind the MacBook Pro, whose PCIe SSD is capable of incredible post-2,000MB/sec read and 1,700MB/sec write speeds. 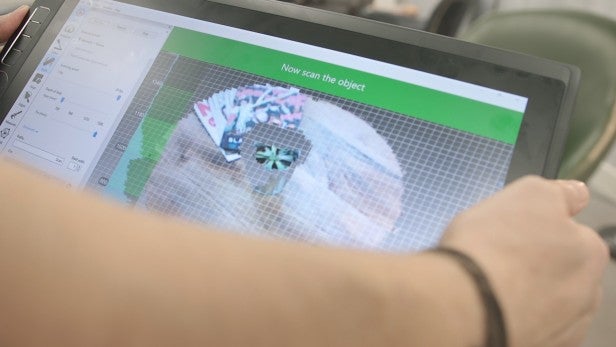 In real-world use the Wacom performed well. I never noticed any slowdown while digitally painting, even when working on gigantic multi-layer projects – although the back of the device did start to heat up to the point it was uncomfortable to work with it on my lap after the first hour.

The same was true for 3D modelling, where the Wacom proved capable of opening and running projects that broke the 20-million polygon mark. As a frame of reference, most TV studios don’t go above 9 million.

Video-editing performance on Adobe Premier was solid (tested by TrustedReviews’ video guru Marc Forster-Pert) – although once again, the device did begin to noticeably heat up with prolonged use, especially when rendering. However, it still easily beat the performance of the Surface Book, which is an important marker.

Noise isn’t too much of an issue with light workloads, and the MobileStudio Pro is significantly quieter than past Wacom Cintiq tablets – but it’s still far from whisper-quiet when running heavy workloads.

The 16-inch tablet is powered by a 11.4V, Li-polymer, 52Wh battery that Wacom claims will offer around six hours’ mixed use off a single charge. Running TrustedReviews’ synthetic Powermark test, which loops 10 minutes of web browsing and five minutes of video playback with the screen brightness set to 150 nits, I found the quoted life optimistic – the MobileStudio Pro lasted two hours before dying.

In real-word use, the tablet performed slightly better. Inking and colouring a comic page with the screen at the same 150 nits, I managed an average of between 2-3.5 hours use.

Considering its focus on performance and the fact that I can’t see many people using the 16-inch version away from the mains, the battery life isn’t terrible. I’d still have liked it to manage at least four hours, which is roughly how long it takes me to finish a page, however. 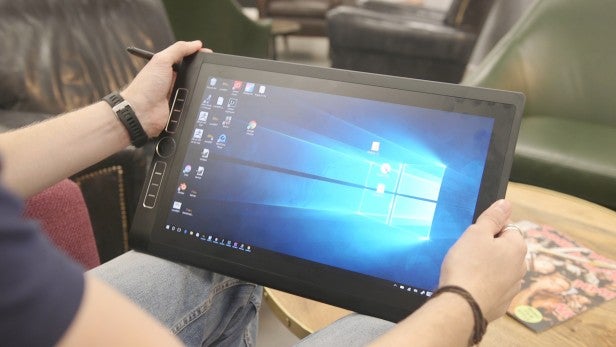 Should I buy the Wacom MobileStudio Pro?

The Wacom MobileStudio Pro is an incredibly focused device that most regular consumers shouldn’t even consider buying. However, if you’re a serious photographer, artist or designer it’s a worthwhile investment.

The screen is wonderfully calibrated, and the Pro Pen 2 is one of the best styluses I’ve ever used. Add to this the optional RealSense camera and customisable Express Key system and the MobileStudio Pro becomes one of the best devices available to creative types – and in my mind it’s a superior choice to the Microsoft Surface Book.

However, there are a few flies in the ointment that stop it achieving true artistic greatness. The SSD is much slower than top-end machines, and the MacBook Pro has a better-quality screen. If drawing directly onto a screen isn’t crucial for you, a combination of a MacBook Pro or Surface Book hooked up to a Wacom Intuous tablet might be a better bet, but this will be down to your own personal preference.

I’m also not convinced that anyone other than CAD designers and artists will need the top-end 16-inch version. The 13-inch model is cheaper, more travel-friendly and will meet most amateur artists’ needs – despite having a lower 1440p screen and Intel Iris; not Nvidia graphics.

The Wacom MobileStudio Pro is a dream device for artists ready to make the next step, but its high price means it’s unlikely to find a home with hobbyists.