Wacom is the near-unchallenged king of the graphics tablet. It offers everything from affordable tablets for budding bedroom scribblers to tools for the pros.

The new Wacom Cintiq 13HD sits somewhere in the middle ground. It’s a £750, 13-inch graphics tablet that – like its Cintiq brothers – has an integrated display so you don’t have to keep one eye on a separate computer monitor. It’s about as close to real drawing you can get without getting out a pen and paper.

Those familiar with the graphics tablet market may ask why a 13-inch model is needed – Wacom’s 12-inch Cintiq 12WX has been available for just under five years. Well, technology improvements made in that time have enabled a huge change its hardware. 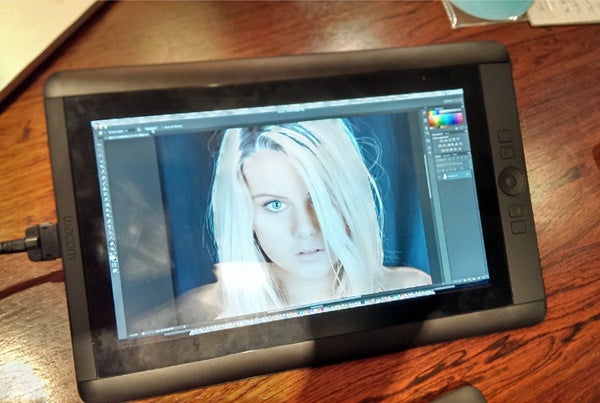 A close look won’t reveal this, though. The Wacom Cintiq 13HD looks a bit like the offspring of a Cintiq 12WX and an Intuos 5. However, it’s crucially much, much more portable than the old Cintiq model. It’s around half the weight – 1.2kg rather than 2.4kg.

This weight shift means the Wacom Cintiq 13HD weighs around the same as an Ultrabook, or a larger tablet. Holding it comfortably in an arm while drawing with your other hand is finally possible. 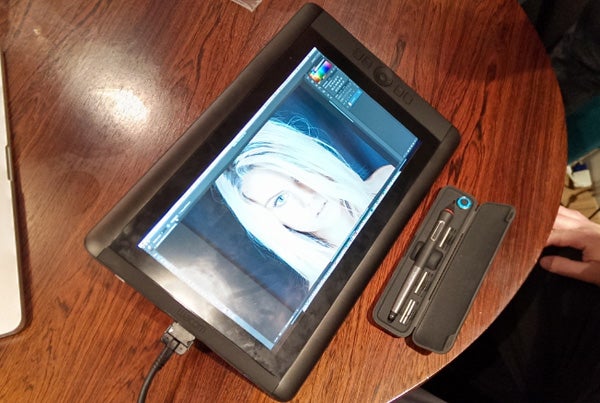 Of course, the Wacom Cintiq 13HD isn’t truly portable. It’s a display and digitiser interface, not a computer in itself, and it doesn’t have an internal battery.

It needs to be hooked up to a laptop or desktop, and needs to be plugged-in. The Wacom Cintiq 13HD uses a clever tri-cable to make this as simple as possible. There’s a proprietary socket on the side of the tablet, in which a cable plugs that splits off into three wires – one to hook up to an HDMI port, another to a USB and a third to the power.

The HDMI powers the display and the USB acts as an interface for the digitiser pen. 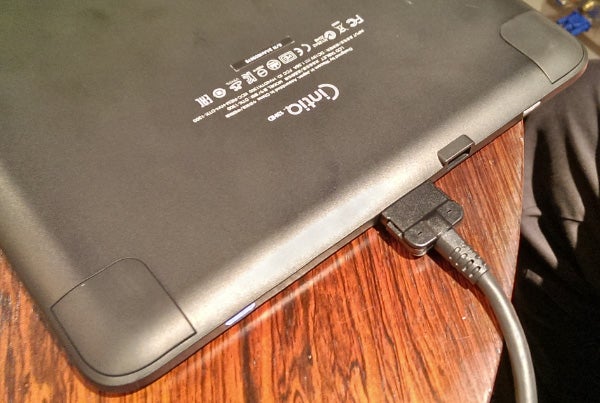 The light weight and clever cable make the Wacom Cintiq 13HD handy as a graphics tablet to use on a lap rather than a desk, but it’ll be happy to work in an office too. It comes with a stand that lets it sit in three raised positions of 20, 30 and 50 degrees, as well as flat on its back. To do this the stand uses three different plastic flaps that slot into grooves on the tablet’s rear. 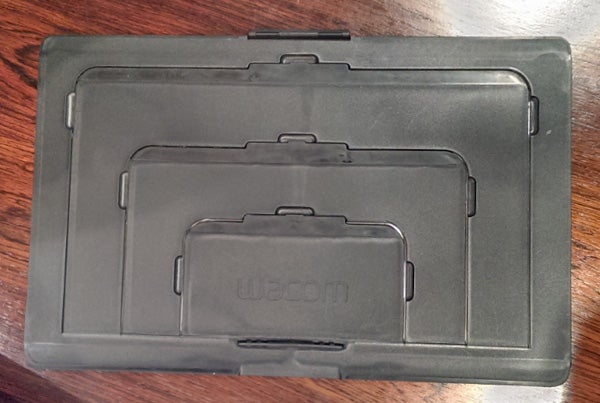 Like the tablet part, the stand is designed to be light in weight, but has a rear made of aluminium to stop it feeling too weak or flimsy. 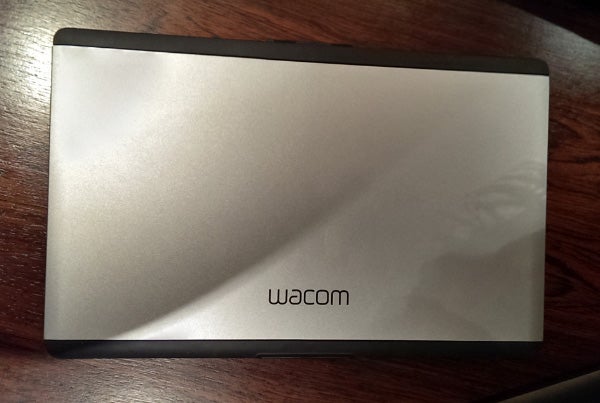 Of course, if you only care about how lightweight the graphics tablet is, you’d end up with an Intuos 5. The Wacom Cintiq 13HD is really all about the screen.

It is 13.3 inches across and offers 1,920 x 1,080p resolution, much better than the 1,280 x 800p of the Cintiq 12WX.  Given that virtually no laptops this size offer such a high resolution, those used to computers should find it particularly sharp – its resolution isn’t notable by tablet standard, though.

It uses an IPS panel, fitted with a matt – rather than shiny – top layer, a natural choice for a product like this. It’s rated at 700:1 contrast and 250nits brightness. These are hardly remarkable figures, and the backlight’s LEDs were visible at the side of the screen when the tablet is viewed from an angle – but it’s an upgrade over the 12WX’s screen, which is limited to 120nits brightness.

The tech that runs the Wacom Cintiq 13HD stylus will sound familiar to Wacom users. It offers 2,048 levels of pressure sensitivity, and a stylus pen similar in design to that of the Intuos 5.

However, the new Pro Pen, as it has been dubbed, is designed to work with all of Wacom’s tablets, not just Cintiq ones. As with all of Wacom’s higher-end tablets, you can expect an excellent and highly naturalistic pen-like response from the Cintiq 13HD. We got to have a brief play with the new Intuos, and found its stylus handling as great as we’ve come to expect from Wacom. 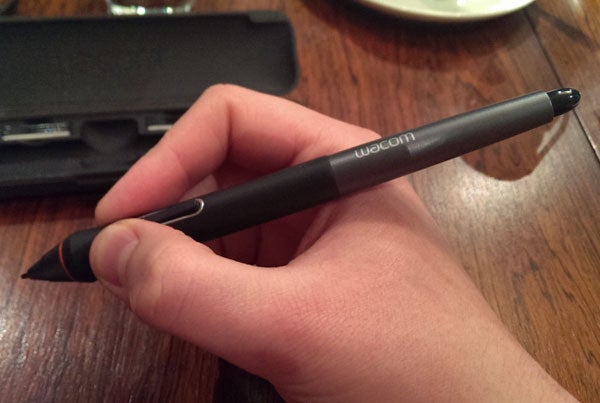 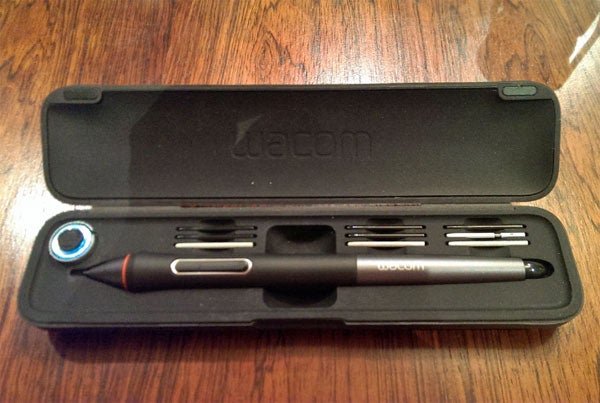 However, what hasn’t changed too much is its approach to software. The Cintiq 13HD features four programmable buttons and an eight-way pad wheel. All of these are highly programmable, but rely on existing keyboard shortcuts or commands – to get them working their best you’ll need to spend an hour or two at least optimising what they do. 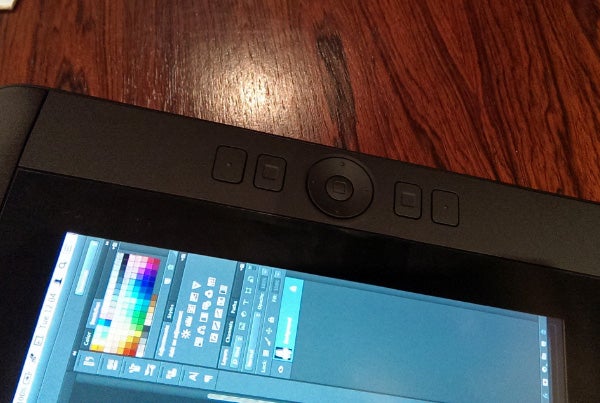 The Wacom Cintiq 13HD is a tool that makes most sense for professionals who’ll appreciate its relative portability compared to the rather more serious, £2k Cintiq 24HD. The price and level of programming it needs to shine will rule it out as the perfect choice for more casual users and less dedicated enthusiasts. However, it’s a solid upgrade of the Cintiq 12WX, and one that was sorely needed.