What is Bamboo Slate?

Tablet specialist Wacom has a whole line of what it calls ‘Smartpads’ – devices that allow you to turn handwritten notes and sketches into digital versions for transfer to your phone or tablet via Bluetooth. The Bamboo Slate, unlike its Bamboo Spark and Bamboo Folio cousins, seems geared more towards those in creative roles, with its larger A4 pad. A smaller A5 version is available, though.

It’s been a year since we tried out the smaller Bamboo Spark and, at the time, that device was somewhat of an anomaly. It attempted to preserve the handwritten note at a time when digital alternatives were, and still are, fast eclipsing such a method. And while the build quality and ease of use made the Spark a nice little gadget, it remained a mystery just who would use such a thing.

With its larger proportions and what seems like a much sleeker smart pen, does the Bamboo Slate answer the question the Spark couldn’t? Well, not really.

Whereas the Spark and Folio come with folding cases in which to store your notepad, the Slate has a simpler, though slightly larger, design. In fact, considering the whole thing costs around £100, you might be a tad disappointed when opening the box expectantly, only to pull out what is essentially an A4 pad attached to a nice-looking clipboard. 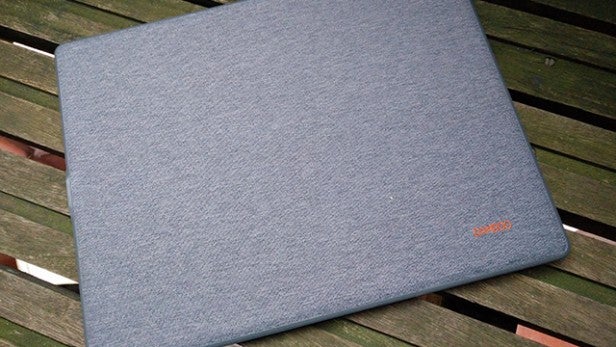 Of course, Wacom justifies the price by packing that clipboard and the accompanying pen, which contain the tech required to transfer any sketches or notes you make on the pad to your phone or tablet. Once you’ve managed to digitise your scrawlings, they can be accessed via the smartphone app, further enhanced using Wacom’s digital tools, or backed up to the cloud for access from anywhere.

All of this can be done by tapping the button on the bottom left of the clipboard after finishing your note. Other than that button, there’s not much to give away the fact that you’re using anything with digital capabilities. There’s the Micro USB charging port on the bottom, and a standard Micro USB charging cable is included.

The grey board itself is made from high-quality polyurethane on the front, and nylon fabric on the back, and feels well built, even if it is a bit bland to look at. It’s also easy to use without putting it on a surface. The paper pad itself is smaller than the actual device, so you can easily grip the thing in one hand while doodling with the other. 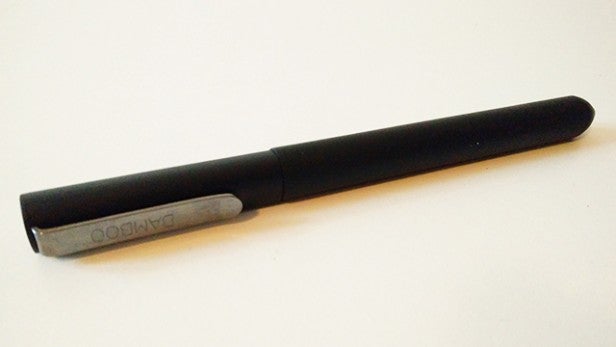 And when it comes to the pad, there’s not much to that either. The A4 (or A5 if you opt for the smaller version) booklet slots into the device by simply sliding the back page into the pocket on the front of the Slate. The paper itself comes with dots printed on each page which are arranged in a grid, and are presumably there to help you create more accurate renderings. Since Wacom says you can use “any paper” with the Slate, it doesn’t seem like the dots are there for any technical reasons.

Finally, there’s the pen, which has an ergonomic triangular design, soft-touch grip and pressure-sensitive tip. This is where the majority of the tech elements reside, so you might expect this to be a rather bulky digital quill.

Happily, Wacom has managed to keep this most important element of the whole setup suitably sleek. The twist-top ballpoint doesn’t feel much heftier than any decent regular pen, and the matte finish makes it a comfortable implement with which to create your masterpieces. You will need to buy special ink refills once the supplied one runs out, however.

Before you get to that point, though, you’ll need to set the Bamboo Slate up. As with the Bamboo Spark, setup is incredibly easy. It’s simply a matter of turning the Slate on by holding down the one and only button on the case itself – which doubles as the sync button – for about six seconds, downloading the Inkspace app (available for both iOS and Android) to your phone or tablet, and activating Bluetooth on that device.

The app should automatically recognise the Slate and pair with it. After that you’re ready to start making notes and syncing them to your device. 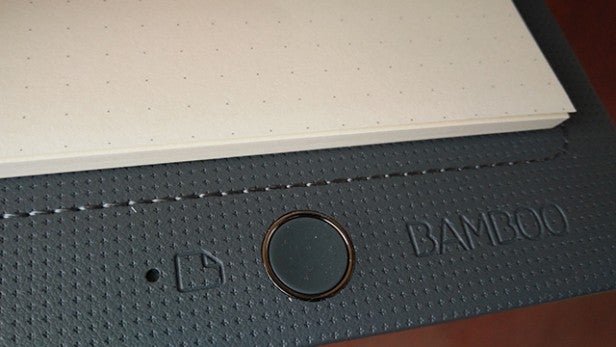 So, how does this thing work? Well, actually taking notes and drawing sketches is as simple as the rest of the steps. All you have to do is write or draw as normal and just remember to hit the sync button once you’ve finished. Even if you do forget that last part, you can use the app’s ‘Split’ feature to rewind through your note taking and split the digital version of the note into two at the point you should have pressed the sync button – but more on that later.

One interesting feature of the Inkspace app is the ‘Live’ element, which renders the marks you make on your phone or tablet’s screen in real time. Such functionality might come in handy if you’re using the Slate and your phone for presentation purposes, but I’m not sure that’s the best use of Wacom’s device. 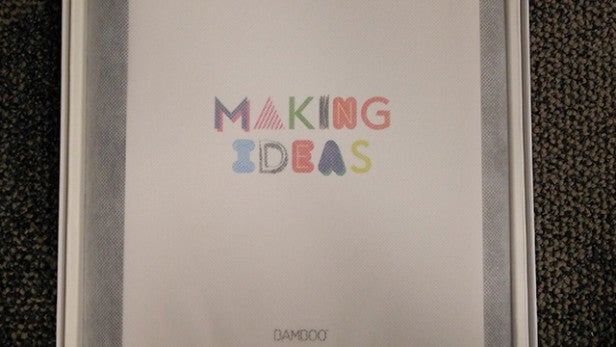 If, however, you just want to sketch away, safe in the knowledge that your creation will be stored digitally, you can just get to it – even if your phone isn’t to hand. The Slate can store all the data even without a Bluetooth connection, and transfer the stored notes to the app once connected.

Actually using the pen to create anything more than a basic sketch or to take notes is unfortunately going to end in disappointment. The pen is pressure-sensitive, but having used it for a bit of sketching, I’m not sure Wacom is entirely correct when it says: “The pressure-sensitive smart notebook and smart pen work with 1,024 levels of pressure so your digital notes look just like your handwriting.”

That’s the same number of pressure levels as Microsoft’s Surface Pro 4, but it sure doesn’t feel like it. In fact, having taken the pen for a spin for a few extended sketching sessions, I’d say, rather than 1,024, there’s about four or five.

I have no way to measure this of course, but here’s a little sketch in both ‘real’ form and digital: 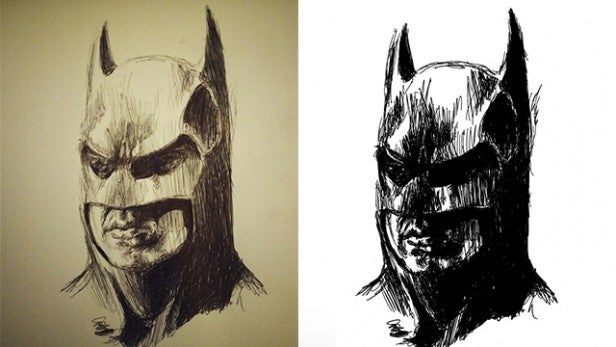 The subtleties of shade are totally lost in the digital version

And here’s me testing out the pressure sensitivity just by drawing out a few lines: 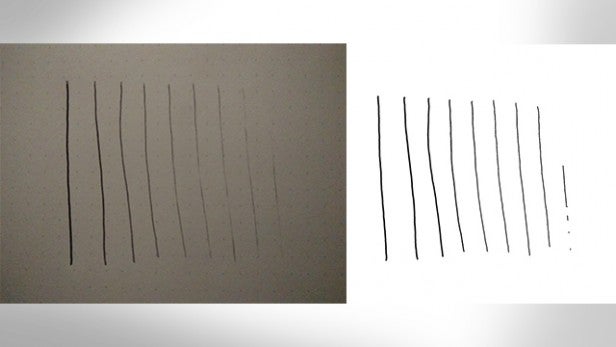 There’s definitely a noticeable difference between the lines, but when it comes to the lighter end of the spectrum, the pen isn’t so good at replicating the lighter touch. And while my sketch is admittedly half-finished and a tad disproportionate, digitising the thing certainly hasn’t done it any favours.

In other words, if you’re looking for an effective way of turning your drawings digital while maintaining any nuance or dynamics, the Bamboo Slate isn’t for you. It may seem unfair to make the point, as Wacom isn’t necessarily advertising the device as a replacement for a graphics tablet. But it does make clear that users can use it for sketching, and as such, it’s worth demonstrating the limitations of this element of the Slate.

On a more positive note, battery life is very good. Using the tablet to sketch the above, which took an hour or so, only saw the battery decrease by 5%, and the Slate has an overall battery life of about eight hours. That should ensure that, whether you’re attempting a slightly more in-depth sketch or taking notes at an interminable office meeting, the Slate will stay powered.

Once you’ve hit the sync button your creation will be sent to your phone or tablet via Bluetooth. The free Inkspace app comes with a ‘Basic’ subscription, which gives you 5GB of storage that Wacom says should hold about 6,000 pages of notes. You’ll also have the ability to sync content across all your devices, and access it via the Inkspace web portal.

There is an Inkspace Plus subscription which you can try free for three months. It has all the features of Inkspace Basic, but also allows you to convert your handwritten notes to rich text and comes with enhanced search features, export to scalable vector file format (SVG), and 50GB of storage (60,000+ pages of notes). 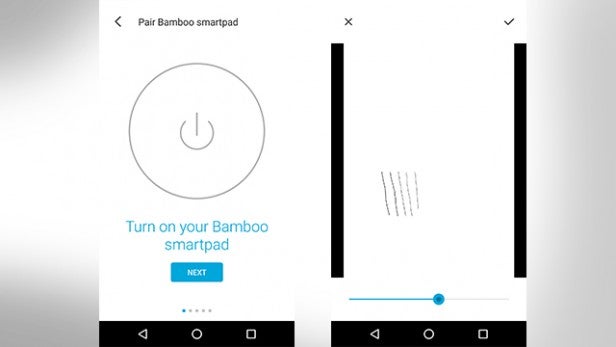 When we tried out the Bamboo Spark last year, there were three different apps that could be used in conjunction with the device, but it looks like Wacom has seen sense and simplified things somewhat. The majority of post-sync functionality is handled by the Inkspace app, while the Bamboo Paper app adds extra tools such as the ability to add colour to your stored notes. It would be nice if the company could shift all this into one app, but I’ll take a reduction to two from three for now.

Within the Inkspace app you can view all your stored notes, draw on them using the app, or back them up to the cloud. You can also check the status of the Bamboo Slate with information such as battery life and the last sync date detailed in a side menu.

Unfortunately, syncing notes to the app seemed to take quite a while on some occassions. Despite the Slate and phone being connected, I often had to wait a several minutes for the last stored note to show up. Considering there’s a ‘live’ mode which is capable of reproducing your strokes in real time, it seems as though syncing should be much smoother.

Should I buy Bamboo Slate?

Wacom has produced a nicely built, easy-to-use, intuitive product with the Bamboo Slate. As with the Bamboo Spark, there’s no faulting the implementation of the idea; I’m just still not convinced the idea itself is a good one. 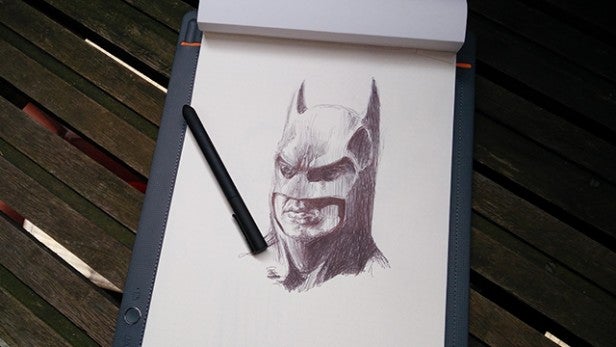 If you’re a creative type who prefers drawing on paper, it’s probably because you’re looking to maintain all the natural subtlety and imperfections that make sketching so interesting and expressive in the first place. If so, the Bamboo Slate’s inability to recreate such elements digitally will disappoint.

That then leaves those who just want to make basic sketches or take notes. In that case, I’m not sure we need an alternative to the tablet-and-stylus approach – especially one that undermines one of the main benefits of the tablet, i.e. not having a load of physical paper to store.

If you really want to retain the feel of pen on paper while benefiting from all the plus points of a tablet, there’s always this.

Another mostly polished product from Wacom. But who would use it?