With the advent of Windows 7, suddenly multi-touch devices are coming out left, right and centre, from monitors like the Dell SX2210T to the unique Wacom Bamboo Pen & Touch tablet we’re reviewing today. This basically takes a traditional graphics tablet, which requires a pen to interact with, and adds touch technology so you can use your fingers as well. And given Wacom has an unmatched pedigree when it comes to creating tablets – its previous Intuos 4 Graphics Tablet scored a perfect 10 and grabbed an Editor’s Choice Award – we are expecting good things. 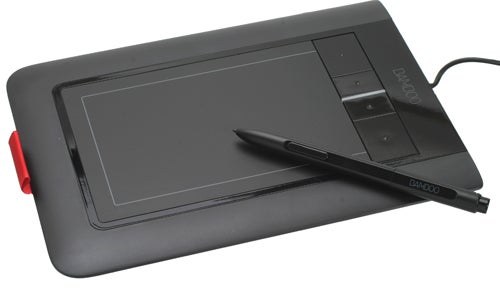 This isn’t Wacom’s only touch tablet, either. First there’s the black Bamboo Touch, which has no pen and won’t accept one if you buy it separately later on – basically it’s just a huge multi-touch touchpad. The black Bamboo Pen & Touch we’re checking out here is the next step up, coming without any software except the standard Bamboo Dock application, which we’ll get to later. And above this are the white and silver Bamboo Fun Pen & Touch tablets, available in Small and Medium (though even Small is slightly larger than the standard Pen & Touch) and with bundled copies of ArtRage and Photoshop Elements.


Returning to the Bamboo Pen & Touch, its 248 x 176 x 8.5mm dimensions (with an ‘active’ area of 147 x 92mm for the pen and 125 x 85mm for touch sensitivity) and 360g weight strike a good balance between portability and a decent working area. Certainly as a touch device it’s more generous than even the largest touchpad, though as a pen tablet it’s at the smallest end of the scale. In the box you get a driver CD, pen and tablet, plus three spare identical nibs and a metal nib-remover, though unlike the Intuos 4 there’s no pen holder to store these in. 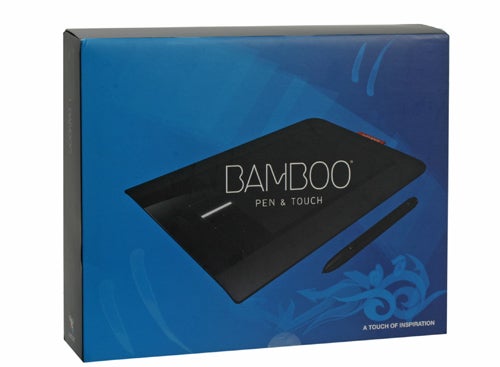 Aesthetically, the Bamboo’s smooth blending of matt and glossy black plastics with a white LED strip is classic Wacom. Indeed, it’s quite an attractive peripheral, if not quite as classy as the far more expensive Intuos 4 range. It feels well-built too, though its thinness makes it feel fragile. One definite step back compared to its more expensive siblings is the permanently attached USB cable. If this becomes faulty or is damaged you’ll have to replace the whole tablet or send it off for repair.

You can set the Bamboo for right or left-handed use with a simple selection in the Pen Tablet Properties application. In its right-handed position, the Bamboo offers four large buttons called ExpressKeys to the left, divided into pairs by a narrow LED strip that glows orange when receiving input from either the pen or your fingers. These buttons offer excellent, crisp feedback. Our only complaint is their glossy finish, which will need regular cleaning to keep finger-print free; as so often with modern devices, style has been prioritised over convenience, though at least the tablet’s surface has been kept matt.


By default, the ExpressKeys are logically set up as right and left click for the top two, while the bottom ones go ‘Back’ or switch the touch sensitivity on or off. If you’re not happy with these presets they can be programmed to perform any function, emulate any key or even macro commands using the Pen Tablet Properties. This makes them among the most versatile device buttons around, similar to the G-keys found on the likes of Logitech’s G13 Gameboard, and potentially a huge boost to productivity. 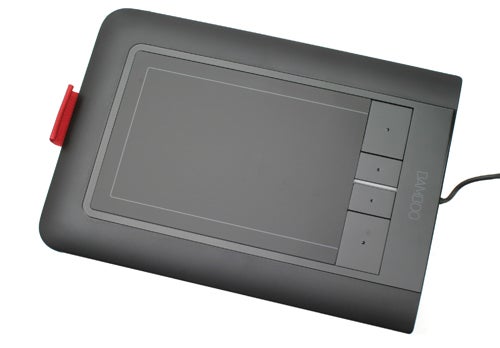 On the opposite side of the tablet is a cloth tag bearing the Wacom logo. This is more than just a fashion statement as it serves to hold the pen, further emphasising the tablet’s portability. Another area where the Bamboo is notably inferior to the Intuos 4 is with the pen itself. While not unpleasant to hold, it’s made of hard matt plastic and its contours are straight – a far cry from the Intuos’ soft-touch, moulded effort. Still, it features the same responsive fully programmable rocker switch and sprung eraser top, and thanks to Wacom’s unique Penabled electromagnetic resonance technology, this pen will never need a battery. Build quality is also very solid and thanks to the extractor, replacing nibs is incredibly easy.

So far so good, but how does the Bamboo Pen & Touch fare in use? Installation is a piece of cake, with drivers for Windows XP to 7 and OS X (Wacom’s drivers provide the multi-touch features for XP and Vista). Once installed, the Pen Tablet Properties applet lets you customise pen and tablet settings to your heart’s content with a clear, logical interface. The Pen Tablet Preference File Utility, meanwhile, will let you Remove, Backup or Restore preferences, though a simpler, integrated and above all on-the-fly switchable profiles system would be preferable.


On the hardware side, while not sporting the prodigious 2,048 pressure sensitivity levels of the Intuos 4 Grip Pen, the Bamboo Pen & Touch pen does sport 1,024 of them. Considering that the pens in Wacom’s previous top-end Intuos 3 line-up and current Cintiq (pricey) range use this pressure sensitivity level, it’s certainly nothing to sniff at and will be more than good enough for even professional artists and photo-editors.

Admittedly, some users might find the Bamboo Pen & Touch’s small size restrictive, yet I did not once notice this constraint while working on a digital drawing. In fact, I can happily report that I found no issues during use. I will add that the Intuos’ tilt sensitivity has been omitted here, but that’s more than reasonable considering this Bamboo’s target audience and low price of around £75.


Of course, using the pen is only half the story. Thanks to its multi-touch capabilities, the responsive tablet allows you to do everything that a mouse can and more. You can left-click by tapping a finger, or right-click by tapping both. You can drag and drop by adding a second finger to a left or right swipe, scroll or go Forward/Back by swiping both fingers simultaneously, zoom by pinching and finally rotate by turning two fingers in a circle. 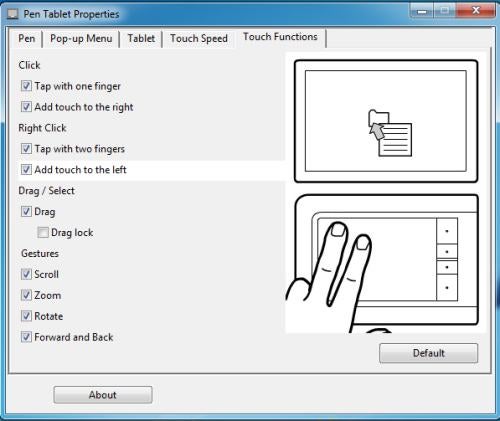 In practice most of this worked very well, though sometimes the tablet confused zooming with scrolling. In fact, it all works pretty much exactly as Wacom claims, and the animated demonstrations beside each function in the Pen Tablet Properties means it’s easy to see how each is done. However, the fact remains that in most situations a good old mouse is still easier than using a multi-touch pad and it won’t truly come into its own until we get operating systems designed from the ground up to take full advantage of it (like the iPhone OS). As touchpads go, though, Wacom certainly rules supreme. Touch is an especially elegant solution when compared to the mouse that came with older Wacom tablets, and is also very handy when using this Bamboo on the move or on your knees. 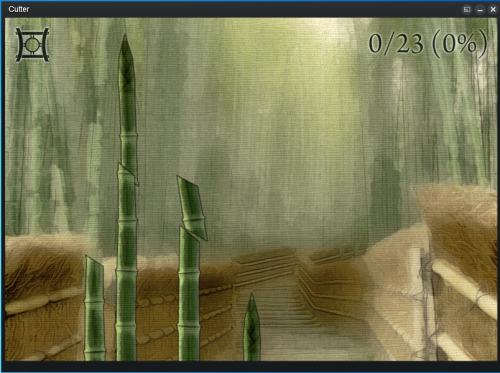 Despite not sporting Wacom’s ‘Fun’ moniker, there’s plenty to be had with the Bamboo Pen & Touch thanks to Wacom’s Bamboo Dock application. This requires a small download and install, after which you can make your selection from a nice range of quirky applets and games collectively known as Minis, most of which work with either the pen or touch, or a combination of both (and a few work with an ordinary mouse too). The example pictured above is called Cutter, and as you might have guessed you need to ‘cut’ sharpened bamboo stakes before they reach the top of the screen by swiping your pen or finger across the tablet. 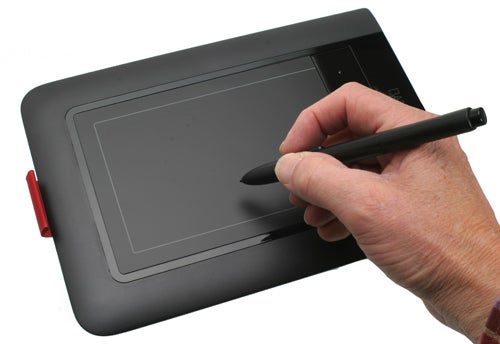 Finally, in terms of value you really do get a lot for your £75 here. Admittedly, the Bamboo Pen model can be had for what looks like a bargain-tastic £45, but don’t be fooled; you lose out on the touch capabilities, those vital ExpressKeys, the pen’s eraser function and half of the pen’s pressure sensitivity (you get a mere 512 levels).


Overall, then, Wacom’s Bamboo Pen & Touch graphics tablet is a good choice, but if you don’t need the touch capabilities and are serious about digital art and photography, it’s worth keeping in mind that the smallest Intuos 4 graphics tablet can now be had for around £160.


Its touch capabilities fail to astound despite working as advertised, but in the Bamboo Pen & Touch you’re also getting a darn good pen tablet for the price. As such, for digital artists on a strict budget or regular users just looking for a fun new way of interacting with their PC, it’s a very good option.