I’d be the first to admit that I’m completely rubbish at drawing. As a kid, no matter how many episodes of Rolf Harris’ Cartoon Club I watched, my attempts at recreating Tom, Jerry, or Sylvester the cat always turned out as a mess of disproportionate squiggles.


I gave up in the end, but I may have been tempted to try a little harder if I’d had a graphics tablet and a decent drawing package. Especially if the former was as good looking as Wacom’s latest baby.

It’s called, rather pretentiously, the Bamboo, and represents the firm’s latest attempt to bring graphics tablets into the mainstream as opposed to the professional market, where graphics tablets are already well-established. As well as the silly name it’s riding heavily on the back of Vista’s built-in support for features such as digital inking, virtual sticky notes and handwriting recognition to get itself noticed.


And in the world of consumer graphics tablets, this is certainly up there with the better models. It’s nice and compact with a 147.6 x 92.3mm drawing area and a desktop footprint about the size you’d need to operate a mouse comfortable (200 x 186mm). It’s nicely built and designed too. The front of the tablet curves down slightly to form a small palm rest, the drawing area is coated in an attractive matt black finish and on the underside a set of four rubber feet anchor the Bamboo firmly to the desk.


Above the drawing area, there’s a gloss black panel running across the width of the tablet and it’s this that sets the Bamboo apart from the competition. Set into its centre is what looks like a circular touch pad, which can be used to scroll or zoom in and out of documents. 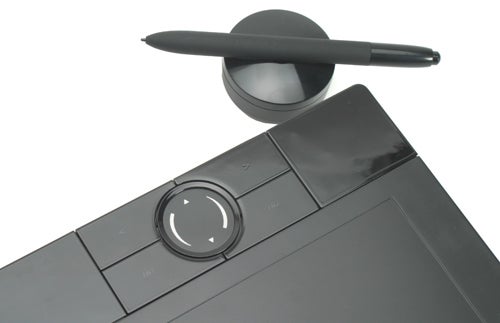 Now scrolling is one of the things that usually puts me off using a tablet in place of a mouse because you have to move the pen right over to the edge of the tablet in order to grab a scroll bar. All you need to here do is move your finger in a circular motion around the tablet to scroll up or down. Like using a scroll wheel on your mouse, it makes navigating long website pages and Word documents a doddle and soon becomes second nature.


Flanking the touchpad are four buttons, aimed at making the navigation process even easier. By default the top two are used as back and forward buttons, with the bottom two for show desktop and switch application, but all can be customised and assigned any one of a number of actions. You can even assign custom keystrokes, though strangely, it won’t let you assign anything that involves the CTRL or ALT keys.

The pen itself is as well-put-together as the tablet. It has a tactile rubber coating running three quarters of its length and the two customisable rocker buttons on its barrel – used for right-clicking and panning by default – aren’t as fiddly as some I’ve used. And when you’ve finished using it, you just pop it down on the supplied stand. Best of all, the pen doesn’t need batteries to run, so it won’t run out of juice when you need it most. 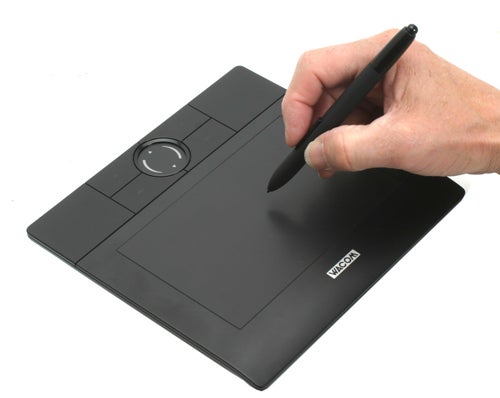 It all works perfectly either as a graphics tool or simply for mousing around. The tablet has a report rate of 133 positions per second and 512 pressure levels, which contributes to smooth transitions from light to dark in drawings – assuming your software supports pressure sensitivity, that is. And standard mouse actions, such as double-clicking and right-clicking are achieved without having to be over precise – a failing that can afflict some tablets.


On a more serious note, if you experience wrist strain from too much mousing, switching to an alternative like this might just relieve a little of the strain. It doesn’t take very much getting used to and if you switch between the two approaches, you may just save yourself some pain. 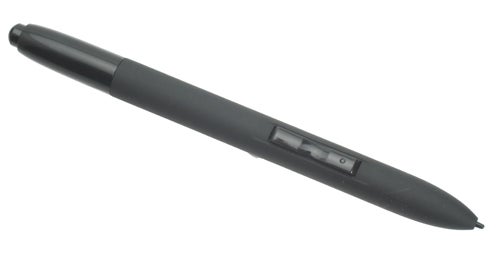 All good so far, but there is one problem. The review unit I was sent emitted a quiet but persistent buzzing noise and I’m not the only one to have experienced this, as a quick trip to Wacom’s forums revealed. It’s a problem that Wacom says has now been resolved at the manufacturing stage, but in the absence of a full product recall, there’s still a risk, albeit a small one, of ending up with a faulty unit that you’ll subsequently have to return to your retailer. At least Wacom is aware of the problem and willing to deal with it, should you encounter a buzzing tablet.


Despite this I’m still going to give the Bamboo a tentative thumbs-up. It’s very easy to get used to and in use it’s responsive and flexible. It may not be the cheapest consumer graphics tablet on the market but it is the best looking and the addition of the touch ring really does make it a viable alternative to a mouse – if not permanently, at least to give your wrist something else to do.