The Asus Eee PC changed the budget laptops landscape dramatically when it hit the market at the end of last year. Here was a well put together machine that combined good looks, light weight and an ultraportable form factor and managed to bring it in at an incredibly low price of £240.


It’s hardly surprising that it’s selling like hot cakes, but while the Eee is perfect for email, web browsing and simple document creation, it won’t be for everyone. The Eee doesn’t have full-blown Windows Vista, it can’t run Microsoft Office, and it doesn’t have high-capacity persistent storage in the form of a hard disk drive either. And though Vista has had compatibility problems with drivers, you’re more likely to get your printer working with it than you are with the Eee, which only supports Postscript devices. 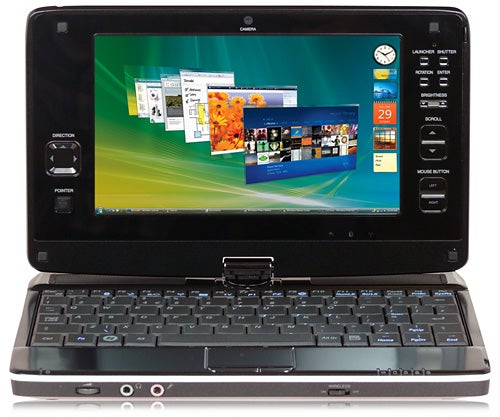 That’s where Vye’s mini-v S37 comes in. Its vital statistics are certainly a lot more impressive than the Eee’s. As well as matching it in terms of dimensions (at 227 x 170 x 25mm – WDH), this little box of tricks squeezes in a 120GB hard disk, it’s powered by a faster 800MHz Intel A110 processor and has double the RAM with 1GB on board.


Admittedly these specifications aren’t exactly ground shaking in laptop terms and it’s no match for powerful ultra portables such as Sony’s wonderful TZ range, for instance. Don’t expect to be able to do video editing on it, play 3D games or for that matter run Vista’s whizzy Aero glass effects. But it is enough to run Windows Vista Home Premium, browse the web and run Microsoft Office without feeling sluggish. In fact I was surprised at just how responsive and light on its feet the Vye felt in general use.


It’s not just the core componentry that’s more impressive than the Eee PC’s, however. As well as being a fully operational laptop complete with keyboard, touchpad and a good-sized 7in 1,024 x 600 resolution screen (again higher resolution than the Eee’s), if you open the lid and spin it around and fold it flat, you can use the Vye as a tablet PC.

Surrounding the screen is a selection of shortcut buttons and controls to improve navigation and ease of use in this ‘tablet’ mode: a track stick for mouse control, a four-way d-pad, up/down scroll buttons and a two-way brightness rocker, plus an array of useful shortcut keys.


What’s more, the screen is fully touch-sensitive, so you can prod buttons and drag windows about with your finger in laptop mode as well as using the stylus (stowed in the lid) to take advantage of the superb handwriting recognition built into Vista.


Of course most people will probably stick to using the keyboard as their principal means of text entry, so it’s just as well this is pretty good on the Vye. It’s a little fiddly at first with such small keys, but after just an hour or so I was touch typing at some speed and not making many mistakes. 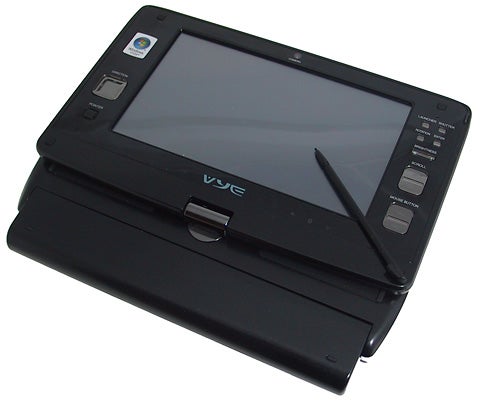 The layout inevitably makes compromises – the backspace key is small, the Enter key is half height and the right shift key is irritatingly the wrong side of the cursor cluster, but these don’t have a significant impact on usability and will be easy to get used to over time. To give you an idea of how good this keyboard is, I wrote the whole of this review on it without getting frustrated enough to resort to either my larger laptop or desktop PC.


The tiny touchpad just below it is equally a triumph of ergonomic design. It looks like it’s going to be a nightmare, but in practice it turned out to be more accurate, responsive and easy to use than many of the full-sized laptop touchpads I’ve used over the years. The buttons, too, have a pleasingly light yet responsive feel. There are no scrolling areas here, but this is another sensible compromise given its small size.


Such sensible design is often undermined by poor build quality and lacklustre battery life, especially when so much is packed into such a small case, but the S37 refuses to adhere to stereotypes. Its plastic chassis is solid, while the rigid screen backing and sturdy hinge are admirably well-engineered and feel as if they’ll take a fair dose of abuse.

The S37 comes with an extra-life battery, which does stick out a little awkwardly at the back and takes the weight to over a kilo – but it also gives the Vye impressive on-the-move credentials. I managed to extract five to five-and-a-half hours away from a power source, using it for general word processing, browsing the Internet over the wireless connection and performing other non-processor intensive tasks.


Elsewhere it’s surprisingly well appointed. Unlike the skinny, fashion-victim’s accessory that is the MacBook Air, the Vye manages to squeeze in an Ethernet port as well as an impressive selection of other ports. There’s no room for optical drive in such a small case, but you do get two USB ports, a VGA output for powering an external monitor plus SD and (oddly) CompactFlash memory card slots. On the front is a pair of 3.5mm audio sockets (headphones and mic), plus a switch for the wireless and Bluetooth adapters. It’s slightly disappointing on a device this portable that there’s no HSDPA, especially given the high price, but that’s really the only area in which this little laptop falls short. 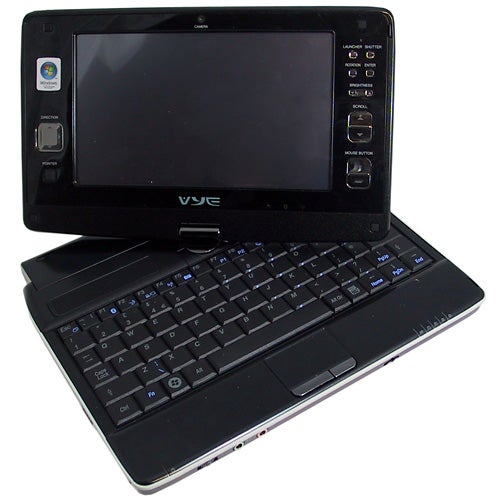 
The fact that Vista requires more grunt on the component front, plus much more hard disk space means that the Vye is pretty expensive. At just under £800 it’s not quite in Sony TZ territory, but it certainly won’t suit everyone’s pocket – you could buy three Eee PCs for this and still have enough money left over to buy a decent compact digital camera.


But that doesn’t mean the Vye is a bad device. I can’t think of another UMPC that’s as well equipped, and if you desperately want a mobile laptop with a high resolution touchscreen, plenty of storage and full-blown Windows, there’s little that compares with it.