In almost every Science Fiction film there is a moment where the lead puts on some glasses which enhance the world around them. The concept appeals to little kid in all of us, that we may somehow see things better than everyone else without their knowledge. Furthermore in a world increasingly dominated by small screens, where visibility is traded against portability, the need for our devices to present information in a more easily digestible format is growing. All of which pains me to say: we’re not quite there yet… 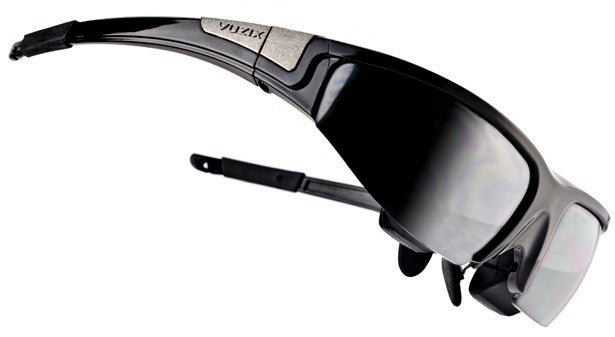 The latest attempt to make our Sci-Fi dreams reality comes from Vuzix. The company has pedigree having made video eyewear for 14 years and is currently under contract with DARPA to develop its next generation of military heads up displays. In the meantime it has launched the ‘Wrap 1200’ for consumers which it hopes will be the launch point for taking video eyewear into the mainstream.

On paper the specs are certainly impressive. Vuzix boasts the Wrap 1200 gives wearers the impression of watching a 75in screen from 3m away, the standard living room viewing distance. It can display in 16:9 widescreen and good old 4:3 aspect ratios, is both 2D and 3D compatible, has an onscreen menu system and a 852 x 480 pixel panel for each eye. The Wrap 1200 works with virtually any device featuring video out such as smartphones, iPhones, iPods, portable DVD players, tablets and games consoles. 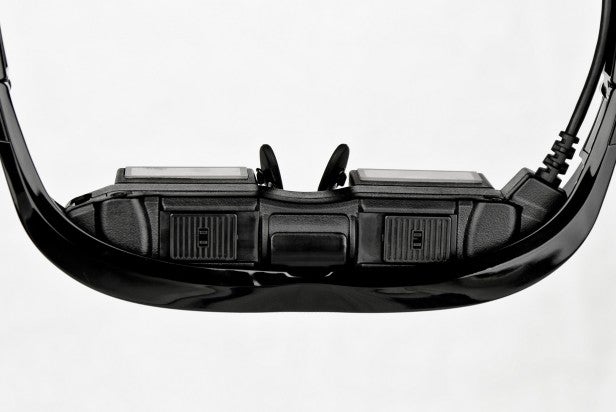 Crucially, unlike many previous video glasses, the Wrap 1200 is also fully adjustable.  The company’s ‘AccuTilt’ display technology allows users to independently tweak left and right eye focus and match their own IPD (Interpupillary Distance or eye separation) for optimum placement in front of each eye (much like binoculars). Furthermore there is an adjustable nosepiece which enables the Wrap 1200 to be worn over glasses and noise-isolating earphones are included, though you can plug in your own if you prefer.

It sounds good, but the first doubts creep in when you open the box. While its marketing photos make the Wrap 1200 look as slim and light as regular sunglasses the truth is very different. Behind each lens is a video screen and this results in a depth of almost 30mm from the front of the glasses to the front of the video screen for each eye. At 85g the Wrap 1200 isn’t heavy, but it is front heavy and requires all the adjustment Vuzix promotes in order to make them feel secure on your head.

A further contentious point is the cabling. Companies are often keen to promote their products as running wire free, but the reality is rather different and the Wrap 1200 is a primary example of this. In order to keep them light, Vuzix has separated the power source from the eyewear. This means you’ll have one thick power cable running from the front left of the glasses down to a separate box featuring two AA batteries. A second cable runs from the box to your device with composite and iPod connector cables provided. In addition you have two separate earphones, one plugged into the left corner of the glasses the other into the right, for your sound or – if you want to use your own headphones – an adaptor plugged into the right corner of the glasses and your headphones plugged into that. It’s a lot of cabling.

The net result is putting on the Wrap 1200 feels more complicated than it should be and equally important is carrying it around is more complex than it should be. Vuzix supplies a USB AA battery charger, but by the time you’ve packed it, a USB power source (either a laptop or USB travel plug), the glasses, the glasses’ power cable, the power box, the correct device connector cable and the independent earphones or your own earphones and the adaptor cable it makes a quick setup and viewing experience difficult.

Vuzix does its best to help. The Wrap 1200’s power box features navigational buttons for the onscreen menu and basic video controls, but that means having to regularly look outside the glasses while making adjustments. Surely building the power source into the arms of the glasses (which would balance the weight), charging them directly off USB and running a single cable directly to your device is the format which should be embraced. 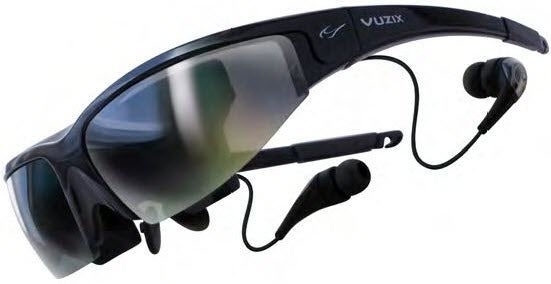 Of course much of this would be forgiven if the Wrap 1200 could deliver the home cinema viewing experience it promises on the move. Unfortunately here it also comes up short. Vuzix is right to stress the importance of configuration because out of the box the viewing experience is poor. But spend time getting the focus distances and IPD right, adjusting the brightness, contrast, hue and colour saturation via the (somewhat clunky) onscreen display and the difference is sizeable. In fact we’d go so far as to say the end result is hugely enjoyable. In 3D (using YouTube’s 3D videos) the effect is only passable with the extra dimension somewhat jarring so close to the eyes, but the virtual 75in big screen effect does work and with a 60Hz refresh rate there is minimal motion blur. Colour reproduction is a little washed out, but the bundled earphones are good enough to lock you into the action. 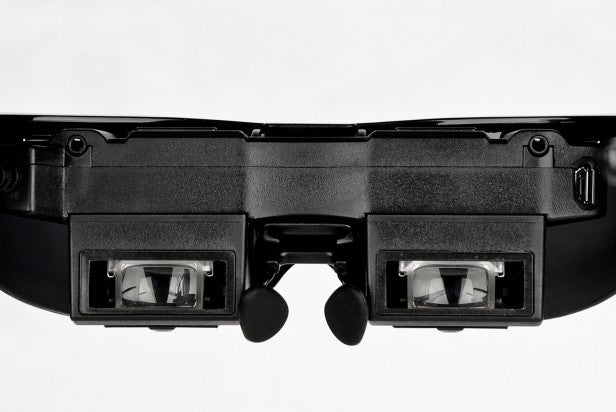 The problem is you are not locked in for long enough. The Wrap 1200 has a battery life of just three hours so if you’re on a long trip you’ll need to bring plenty of spare AAs which only adds to the number of things to remember. That said wearing 85g glasses (roughly the equivalent of an old Nokia candybar phone) on your head for any longer than a few hours does become uncomfortable.

Then there’s the elephant in the room: price. £399.99 is a substantial sum to live out your Sci-Fi fantasies. It will put off the casual user and the long distance traveller will be cautious of the short battery life. Build quality isn’t great either, there are no springs in the arms and lenses pop out too easily meaning you need to pack it carefully as well as remembering all the cables. For £400 you can buy a tablet with a 10in screen, 10 hours of video playback and a wealth of other features. We’re sad to say it, but it’s a no brainer. 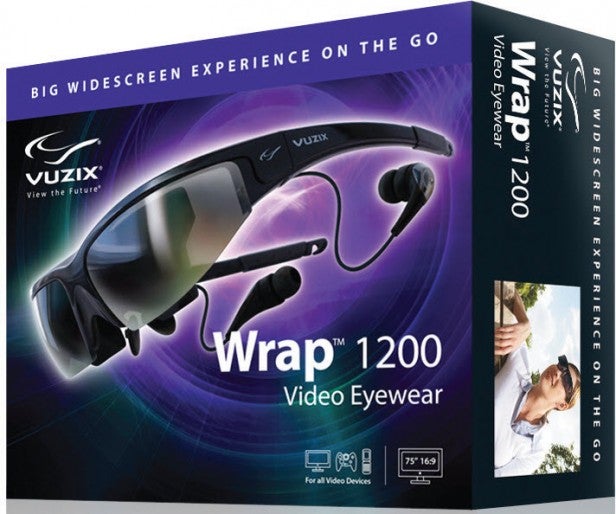 ”’Verdict”’
As technology gets ever more powerful and portable a better viewing experience is essential and video eyewear represents one of the best solutions. Unfortunately we aren’t there yet. The Wrap 1200 is an overly complicated and fussy solution which requires extensive tinkering to get the best from and is let down by weak battery life, iffy build quality and a sky high price. We’ve had a glimpse of the future and it is tantalising, but at present a glimpse is all it is.